Weekend with friends in Denver

When we talked to them Friday night, the Darby's were a bit apologetic about the fact that they were going to be busy all weekend with baseball.  Both of their older daughters were playing in a ball tournament Saturday and Sunday.  They were on two different teams which were playing alternate time slots, so it meant back to back baseball all day Saturday and Sunday.   Now many of you know I love to watch baseball, so this was right up my alley.  There was no better way to spend a weekend with them.   It was good quality softball and the teams were quite talented.  The first game we saw was Nicole's team.  Then we moved to a different diamond and watched Loren's team.  Because the girls had both just joined these teams, they didn't see much action.  We were glad we got to see Nicole pitch one inning and sorry we missed Loren playing field in a game we missed.  Thanks for entertaining us girls.  We didn't get much for pictures but will share the one we have.

After the ball games Saturday we were invited back to their house for a wonderful supper.  The 2 younger girls, Olivia and Emily were going to a Halloween party.  I managed to get a photo of them in their costumes.

When we met Dave and Julie Darby 2 years ago in Cottonwood AZ,  they were living in a motor home for a year with their 5 kids, Johnathan, Loren, Nicole, Olivia, and Emily.  They also had a dog named Truman who is a big ole lovable Great Pyrenees.  It was Truman and Charlie meeting that actually led to us meeting the whole family.  We immediately fell in love with them and have kept in contact ever since.  For that reason, I have to include a picture of Truman and since that meeting another dog, Kennedy, has been added to the family.

We spent the evening chatting at their house, and after some pumpkin pie and whipped cream, we headed for the Ponderosa.

Sunday the girls teams were both in the playoffs, and when Nicole's team made it to the final, we decided to go watch.  It was an awesome game and both teams played their hearts out.  Nicole's team ran out of runs and congratulated the opposition on being tournament champions.

After the game we went back to their place again and ordered in Pizza and wings.  It was great making the bond we did with this family.  We really enjoyed our time with them and will make time to visit again.  They have an awesome view of life as well as an awesome view out their back window of the Rocky Mountains.  I will leave you with that as our view out the window tonight. 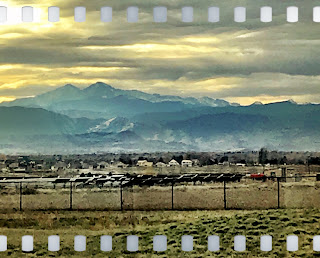 Posted by Lorne Green (A Place Called Away) at 15:26:00
Email ThisBlogThis!Share to TwitterShare to FacebookShare to Pinterest