WHERE ARE WE? La Penita, Mexico
I feel really guilty even doing a post today.  We had a very boring day with nothing happening so guess what we did???  Eat!!!   Well let's make the most of another eating post.  Last night at Tina's we were informed that she was doing Birro and Quesada's this morning.  She also has Menudo, but nobody is brave enough to try it.  Cows' innards of some kind, I think.  When we got there, they were just preparing everything.  We got set up at the table and the only thing missing was our bibs!!! 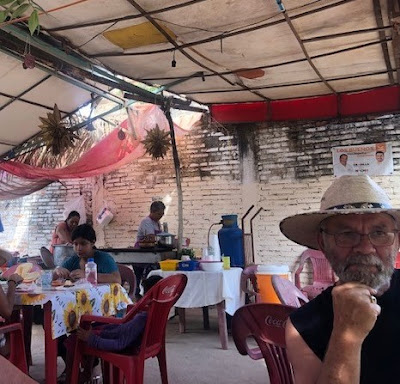 The big pot of beef had simmered on an ope 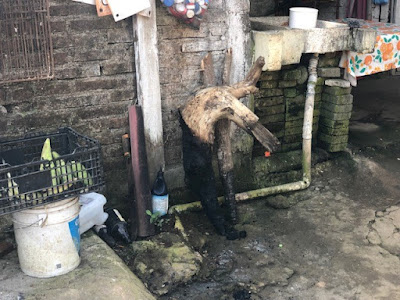 Erika was busy chopping up the meat to be put back in the pot for the birria.  Birria is like a stew with lots of veggies and beef in a yummy broth.  I think it is one of my favorites now.  Sue had some Quesada's as well.  The Birria comes with tacos to eat with it.  I sure enjoy having tacos with everything.  You just tear it up and use it to balance a mouthful of the food you are eating on it. 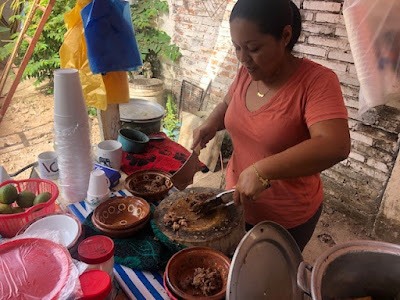 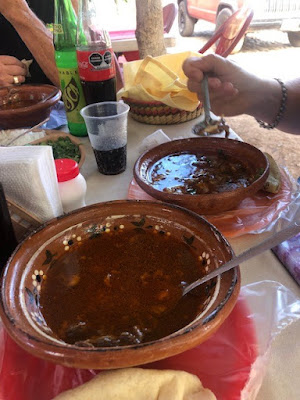 Lots of stuff to add to the soup.  That brown stuff will light you up so be careful with it!!!  Onions and cilantro to add. 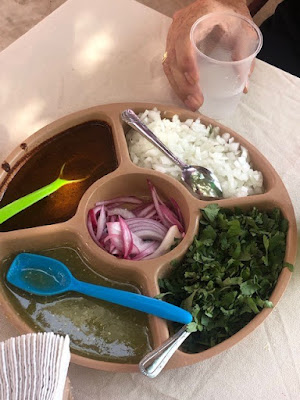 We also had some Negro frijoles (Black refried beans) which are like a part of almost every meal.  I think I actually like them more than our pork and beans.  Notice the masher that they mush them all up with. 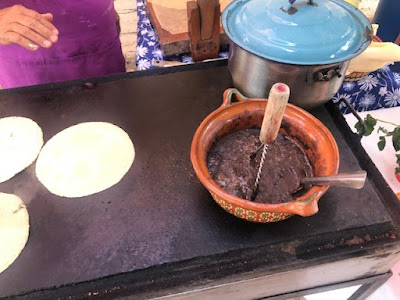 A forkful of frijoles and a mouthful of birria and you have a mouthwatering combination.  Tina lightly toasts the tacos on the grill.  This is all done in her front yard under a tarp and the most delicious food you ever had comes rolling out.  Now this was not a freebie, but rather this is what she does for the locals every Domingo (Sunday)!!   The cost of the meal was minimal, but it helps with the bills.  Before we left, we got an invitation to come back on Martes (Tuesday) for a special meal with the family.  The google translate that they showed us said "We want to pamper you!!!"   We will be there with bells on.  We have fallen in love with this family, and we enjoy our time with them.  Conversations are still a bit limited, but we notice that for the most part, we can communicate enough to know what is going on.  The laughter is awesome and the sense of being considered part of their family is priceless.  We are so blessed. 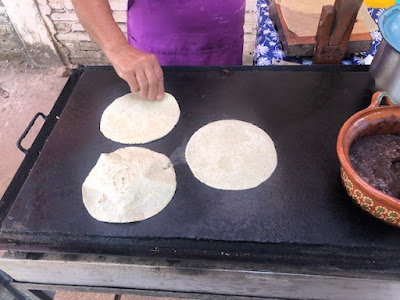 I did get a picture of one other thing other than food.  Well, it is kinda food but still running around.  They have some really colourful roosters here.  This one has all sorts of colours and just shimmers in the sunlight.  Ok that was it for today.  Goodnight!! 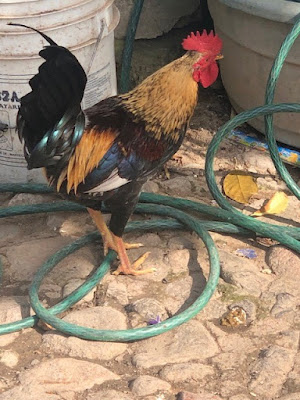