Today started early.  Our shuttle picked us up at 3:00 am at our hotel room and by 3:30 we were on our way to Cancun.  We had an excellent bus driver who talked the whole way there.  Of course at that time of day we were the only ones on it.  When we arrived the airport was quite empty and dark.  It didn't take long to get through security and immigration and then we sat at our gate for an hour and a half.  There wasn't even anywhere to get a coffee for a long time.

We went to a little Cuban restaurant near the car rental place for breakfast.  There were a lot of Cuban men there and they were loudly discussing something in spanish.  I think it is a meeting place for the local Cubans. Breakfast was delicious and only 10 bucks for both of us.

We decided to take 41 highway back across gator alley because it is a less travelled highway.  We were glad we did because we got a real feel what the everglades are like.

First stop along the way was at an airboat place that took us out into the everglades in search of alligators and other interesting stuff. 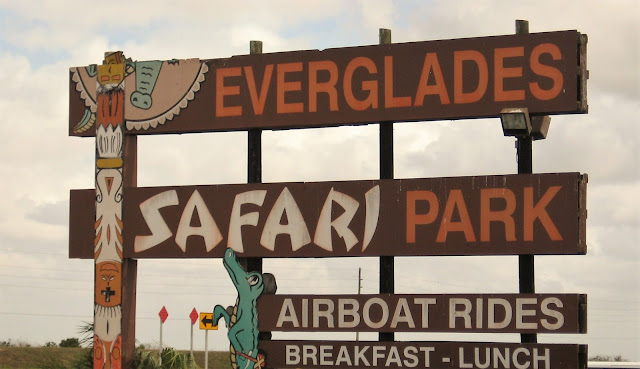 We got on a tour for 25 bucks each and while we were waiting we spotted an alligator sunning himself near the path. 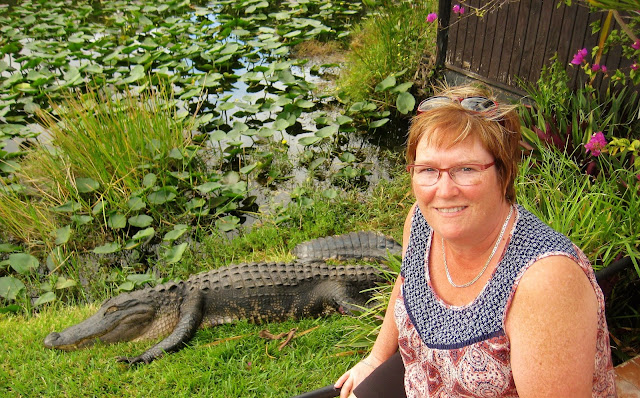 Soon we headed out for an awesome tour of the everglades.  Out boat driver was very informative and we saw lots of stuff. 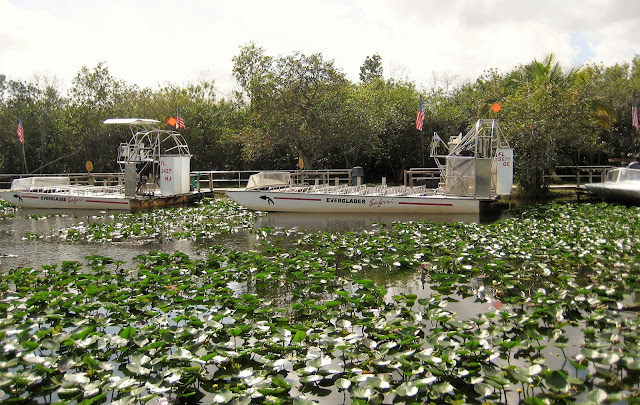 All of a sudden the boat stopped and our driver started to tell us about the area.  He pointed out a flower which was about the size of Baby Breath and told us a bit about it.  Water hemlock is considered one of North America's most toxic plants, being highly poisonous to humans. It is also known as poison parsnip.   It is native to temperate regions of the Northern Hemisphere, mainly North America and Europe, typically growing in wet meadows, along stream banks and other wet and marshy areas. This was only a very few times he had observed this plant in the everglades but said that if someone touched it, he wouldn't be able to get us to a hospital in time to save our life, and even if he did, the hospital couldn't do anything anyhow. 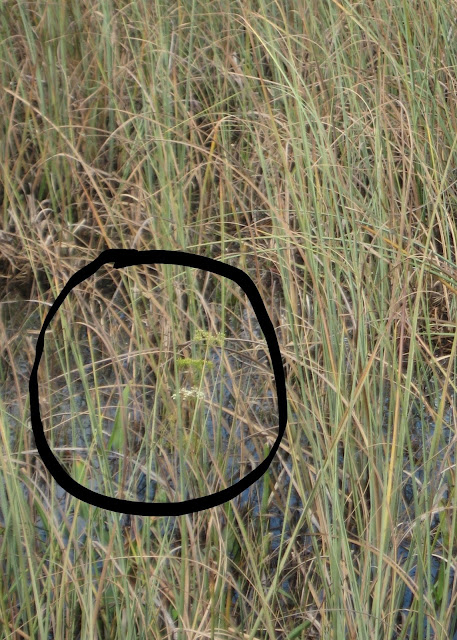 We continued on and saw quite a few alligators in the wild. 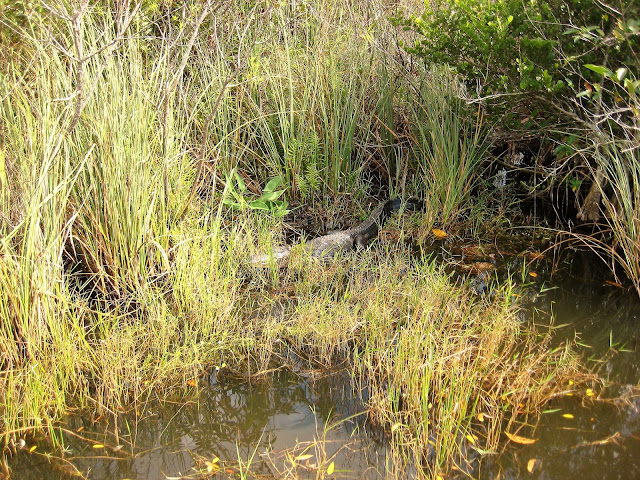 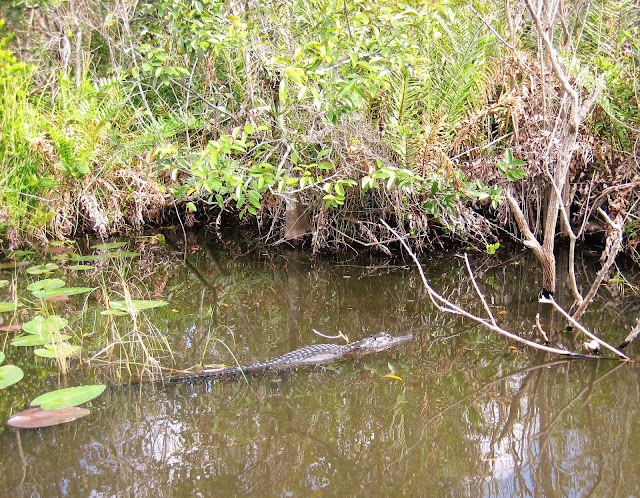 After the boat ride we were invited to go to the alligator show with the admission being part of the 50 bucks we already paid.  We thought that was pretty good. 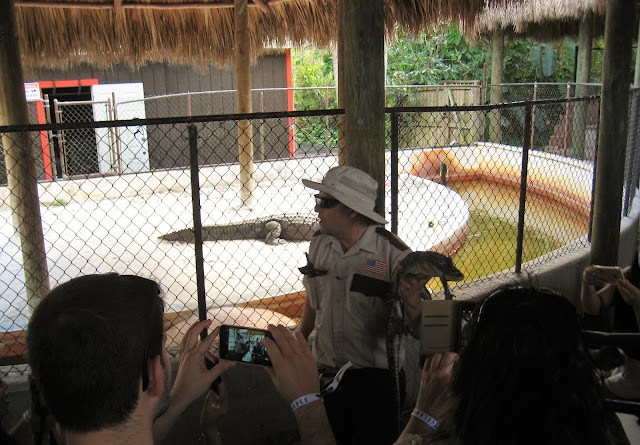 Both the airboat guide and this parks guy told us that alligators are not really that dangerous.  They are not going to attack a human unless you stick one of your body parts in his mouth.  He demonstrated how fast and hard the mouth closes by sticking a small stick in Killers mouth.  It snapped shut pretty fast and with a loud snap.   They are naturally afraid of humans.  He did caution us not to confront and alligator if we have the choice not to however.  The old wives tale that they will chase you and eat you are mostly untrue.  I decided to try out the theory on Susan, and he didn't chase her just like the man said.

After the show we continued on across the everglades and were quite surprised at how many alligators we saw sunning themselves on the banks of the canal which runs along the highway the whole way.  We probably saw close to 100 alligators in that 100 mile stretch. 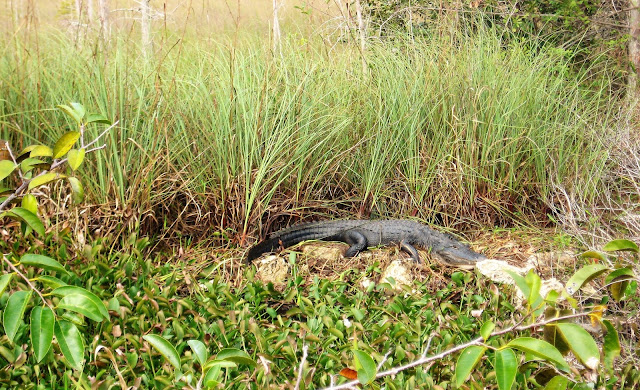 We came across this palm tree with another tree or large vine growing around it.  There are lots of things like this in the forest around here.  So much to see. 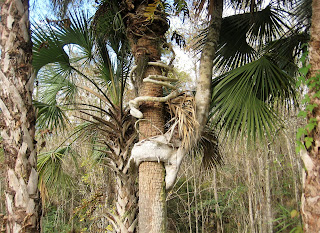 We arrived home around 7 pm and Paul and Betty were just getting ready to leave for North Bay.  We had hoped to spend a couple days with them when we got back but they got all their jobs done quicker and I imagine their business is needing them back.  We will stay here in Cape Coral for a couple days to get rested up from our holiday!!!
Posted by Lorne Green (A Place Called Away) at 17:05:00
Email ThisBlogThis!Share to TwitterShare to FacebookShare to Pinterest