Dave and Cheryl came to Visit

When I woke up this morning I was surprised to see Sue dressed and ready to head out the door for a kayak ride.  I am usually the first one up so this was a change of tradition.  It was a beautiful morning for a nice paddle around the lake.  She was gone for about an hour. 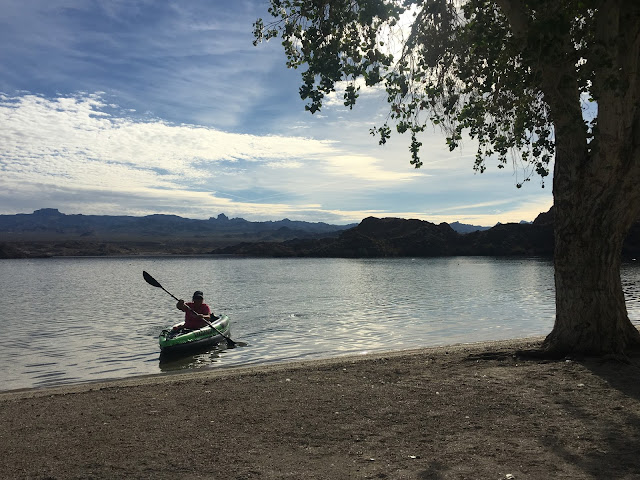 After Sues voyage, Lessie decided to take the kayak for a little spin.  Lessie had never been in a kayak before but she caught on real quick.  She was soon whizzing up and down along the beach. 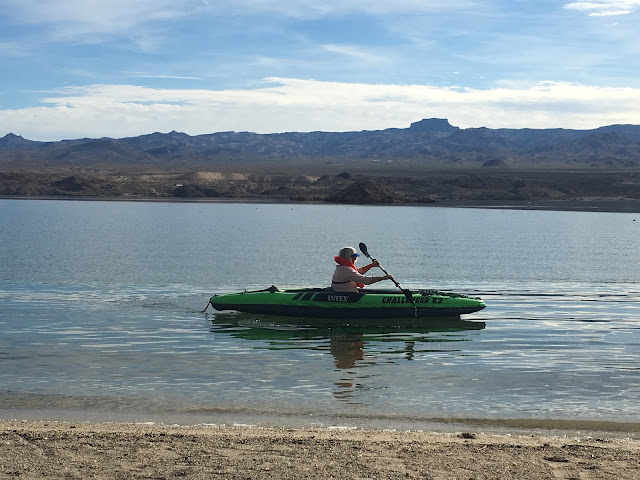 Yesterday the girls planned a Keto breakfast for everyone featuring keto waffles.  Everyone, (except me) was to chip and make it a fun event.  I was busy setting up for a drone flight later. 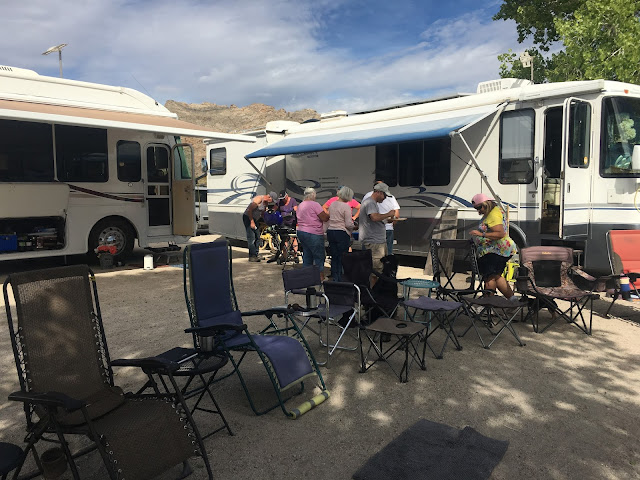 The chefs for the day were: Pat on bacon, Sue on waffles, and Ed on eggs.  Everyone else was an official prep chef. 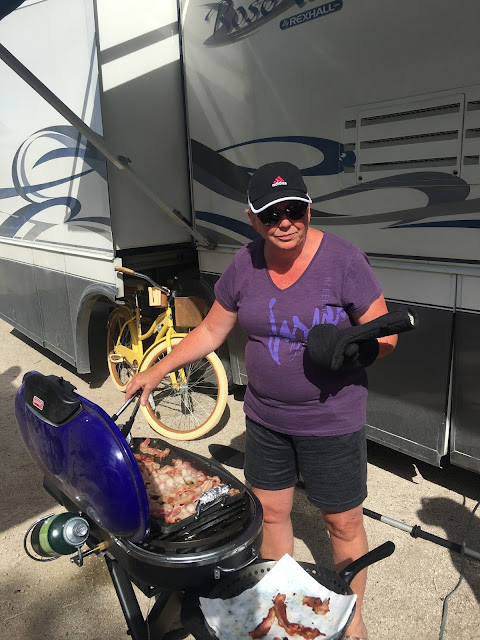 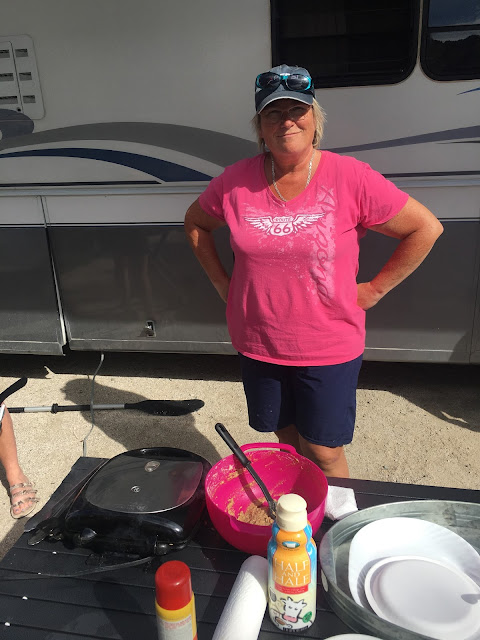 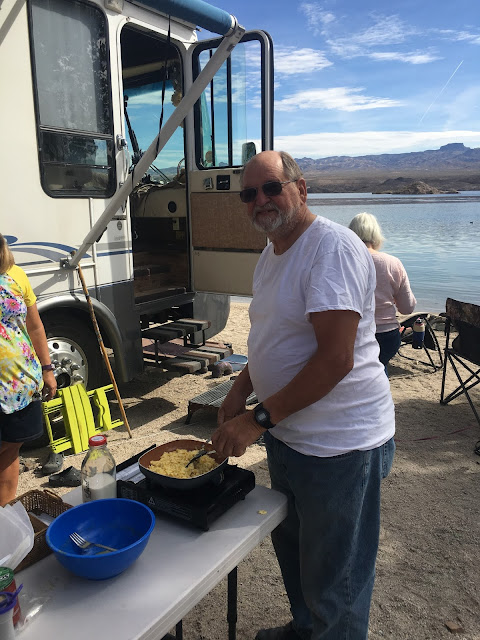 After breakfast we all sat around on the beach and watched the drone.  It is always fun to get some shots of our camp site with it. 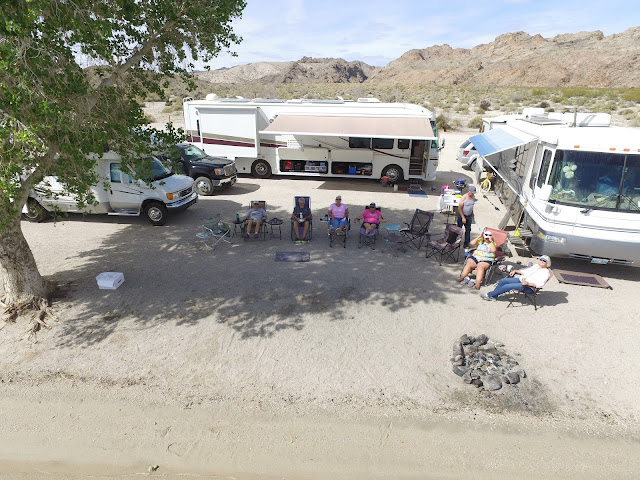 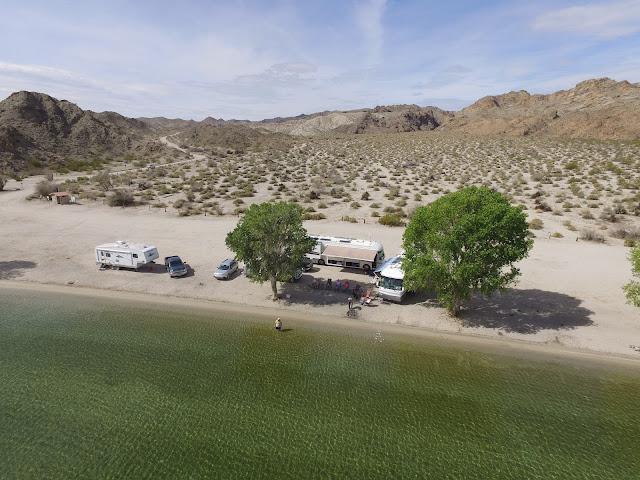 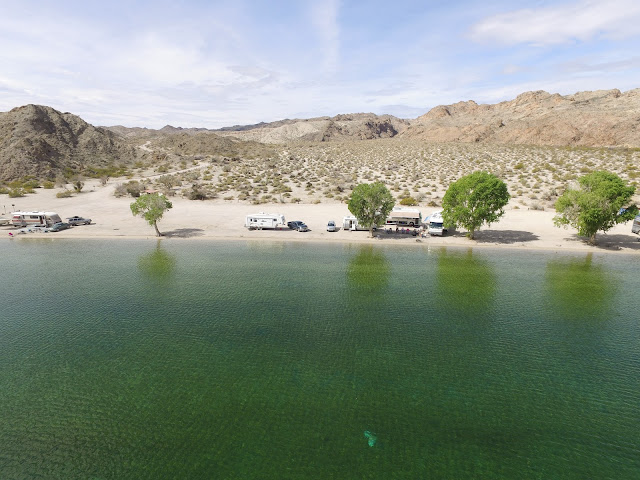 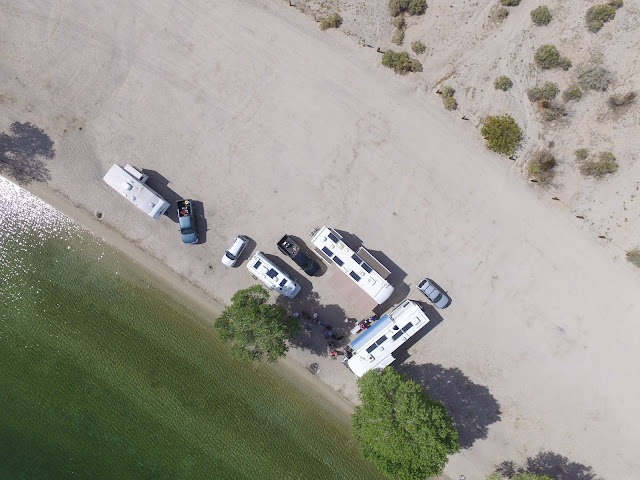 Pat went for a kayak ride so we got some drone pictures of her.  It was amazing how clear the water was.  You can see right to the bottom from up above. 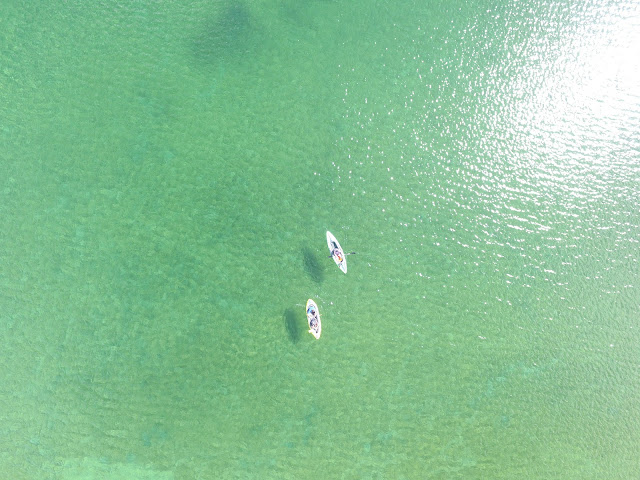 Angela, Chuck, Harold, and I headed out for a hike.  There are lots of caves around to explore and lots of canyons to hike in.  It was a warm day so the boys were catching a few rays.  Lexi was leading the way, and Charlie was off somewhere chasing little desert lizards. 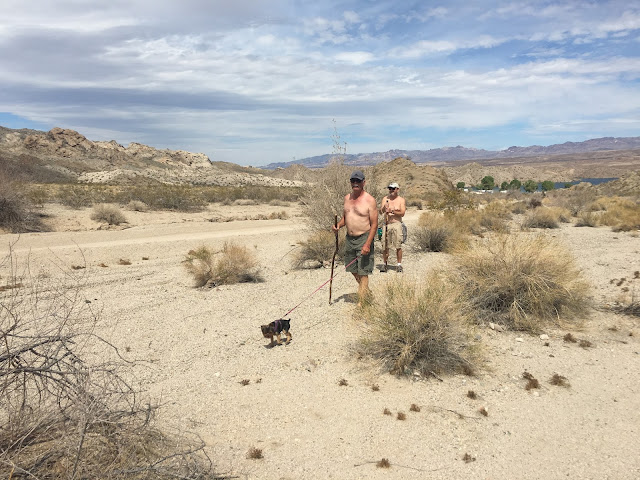 We sent Chuck up the mountain to retrieve a broken golf club.  He did have a little fall and skinned his elbow and his knee.  I didn’t think it would be appropriate to take a picture of the ouches. 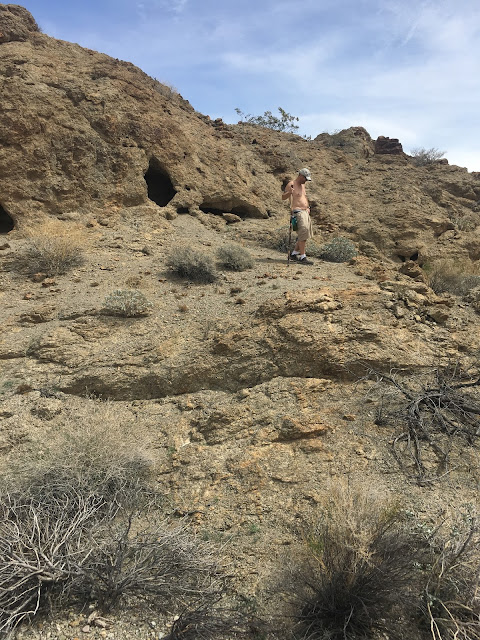 Once again we found a cactus blooming in the desert.  It never ceases to amaze me how such pretty things can show up in such a harsh environment. 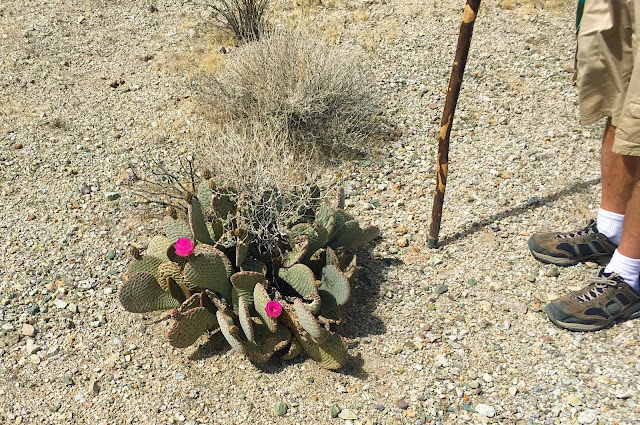 When we got back from our hike there was a truck parked at our camp site and a guy was talking to the girls.  It turns out it was Dave McMechan and his wife Cheryl from the blog Our View from Here.  They have been in the Bull Head City area for a while and decided to look us up while they were exploring Telephone Cove.  Thanks so much for dropping by and we hope Cheryl is feeling better.  We would have loved to invite you to sit around for a while if she hadn’t been feeling ill.  After they left, I realized I hadn’t taken a picture to post on the blog.  I am terrible at that.  It wasn't long and afternoon happy hour began. 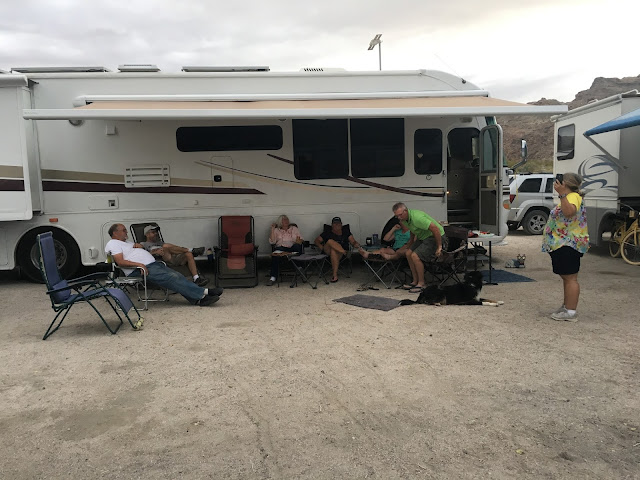 All of our get togethers seem to involve great food and tonight was no exception.  Everyone enjoyed lots of munchies and told a lot of great stories.  We sure do have some laughs. 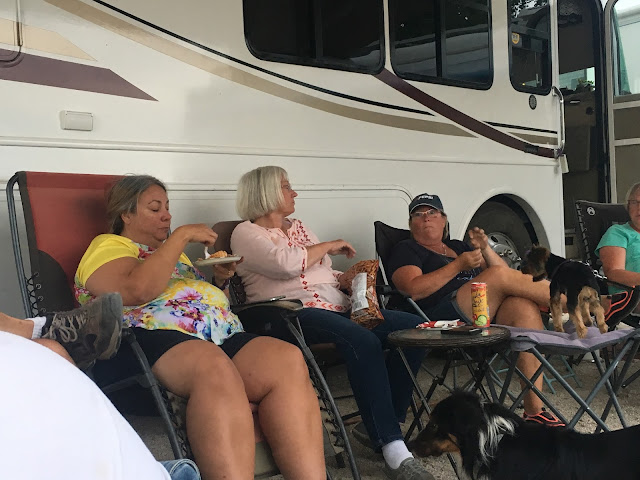 This was the view from our window today:  Kyra has left for Lake Mead so there is a hole in our circle. 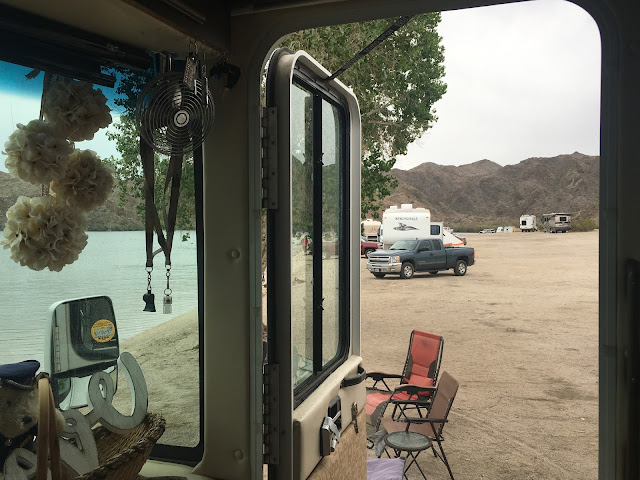 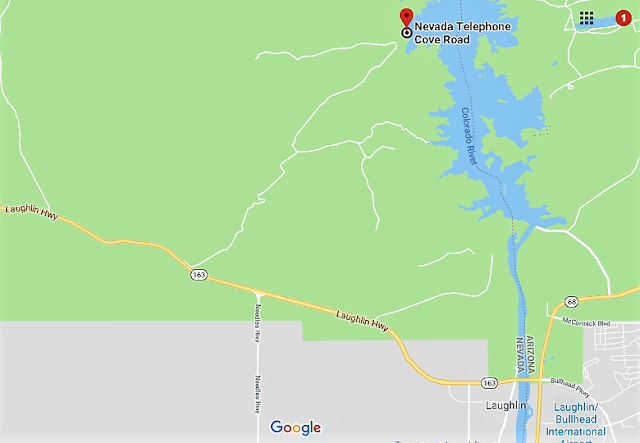