WHERE ARE WE? La Penita, Mexico
In my hurry to post the informative blog yesterday, I forgot to mention that we went out for supper with P & H and Fred and Carol.  Fred and Carol have been staying in the ground floor suite for the past 6 weeks and tomorrow is the day they head back to Vernon, BC.  We were invited to join them in another of those famous "last suppers"!  We went to Teriyaki Alex's for a real tasty meal.  I had pineapple ribs with real mashed potatoes and butter.  They were tasty. 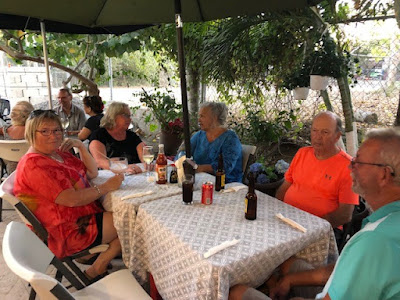 Blair and Joanne were there with friends as well so it was fun to hassle them across the way! 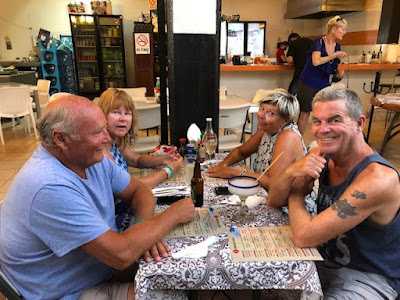 Now fast forward to today and we all gathered to say goodbye to Fred and Carol.  They are flying out of PV later today, so have hitched a ride with P & H who are going to PV to visit Murphy.  Hope we see them again sometime!  Actually it turned into a big hug fest rather than a send off.  Never a bad time for a hug.  Everyone just hugged everyone whether they were leaving or not! 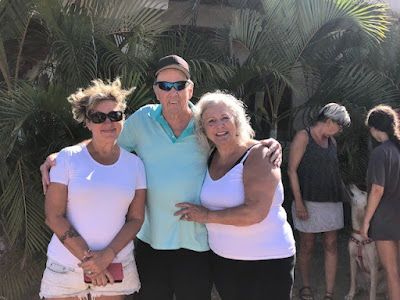 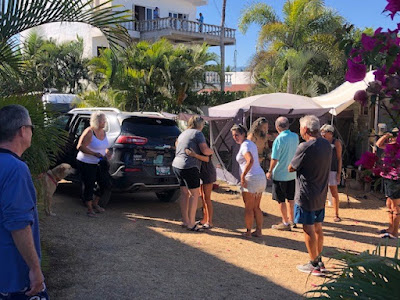 One of the dogs from down the street "Mamacita" took a liking to Fred while they were here and followed him everywhere.  I think she may have been treated royally the entire time they were here because I think she gained a little weight!!  She was all depressed later in the day after Fred left, and she sat by the beach gate sulking.  Archie couldn't even cheer her up. 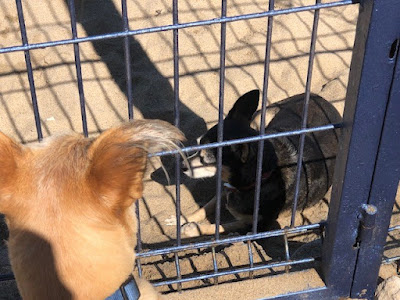 It was quite a warm day so we laid low for the afternoon.  On toward supper time we headed downtown to do a few errands and go to the bank.  We did find out kinda by mistake that if you hit the wrong button on the ATM when it asks you if you want the conversion done by the Mexican bank or your bank, there is an extra $12 US conversion charge if you choose the Mexican Bank.  Woops!!  We will pay better attention next time.   A nice tip for someone!!!    Oh well with that lesson learned, it was time for supper.  We have noticed a rooftop bar called Stars for a while now and they advertise Hamburgesa's so we though we would try it.  We were the only ones there but the food was great.  Not really a Mexican experience though. 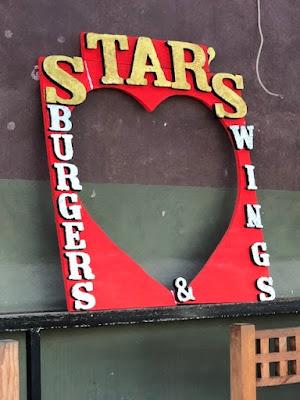 They did seat me next to a pretty lady, so I ordered up an orange juice and we got the night underway.  I may end up taking her home!! 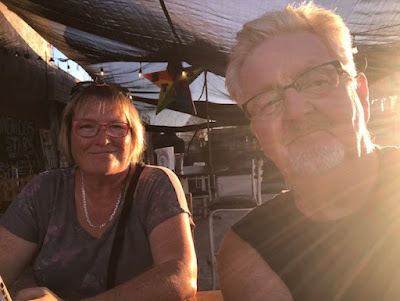 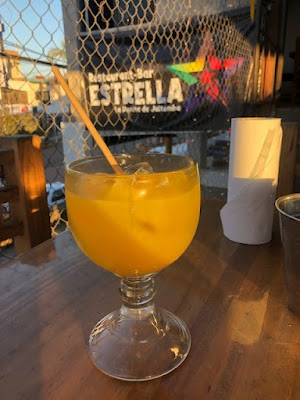 We got to see rush hour in La Penita.  Lots of the residents of La Penita work in Rincon at Hotels and condo's and they all come back and forth in colectivo's which are mini van taxi's that carry 10 people or so.  It is also a transportation hub for going to many of the other small towns around the area, so the street can get quite busy with taxi's and colectivo's.  The bus and taxi stop was right beneath us.  I had to stick my hand through a hole in the chain link fence to get the picture. 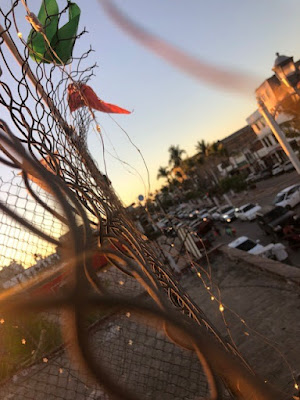 The sunset was not as spectacular as on the beach, but it was a sunset none the less.  The problem with each sunset is that each one we see, takes us closer to having to leave this place.  Actually we are starting to get hitch itch and need to move on to see some new stuff and meet up with some old friends.  Our home has wheels for a reason. 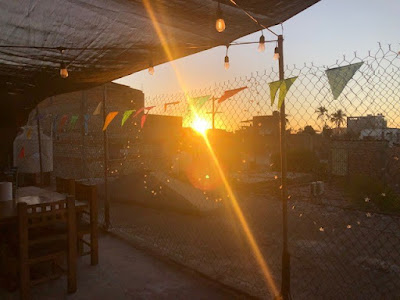 After the nice supper, we stopped by the El Cafecito for a smoothie for desert.  Diago did a great job of making it under Kenia's supervision.  I sure wish her little shop was in a better spot where she would get more customers because her product is great!!   A little story about Diago.  We asked him how school was today.  He said he is having exams!  How are they going Diago?  His head hangs a little bit and Kenia says "he got 3 out of 10 on an exam today.  OH!! I says, what subject was it (thinking it would be Math or Biology.  Nope.... Spanish!!!   Lol  I nearly fainted.  A Mexican failing Spanish?  But then I got to thinking about the mid 50's I got in English back in the day and hey, maybe that's ok.  So we determined that Diago and I both don't do well in Spanish.  I'm sure I'm struggling to get a 3 out of 10 as well. 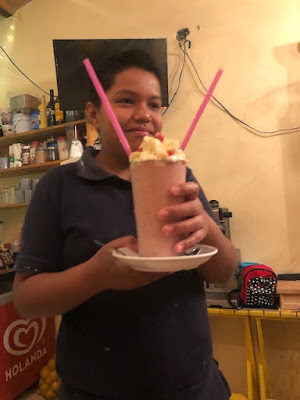 I am watching all the nonsense happening in the US and at home in Canada with regard to prices increasing dramatically but also realize that the information I am getting is probably skewed badly.    We have not witnessed any increase in fuel prices here, that I have noticed, and I don't think any other things are going up either.  I get to wondering if there is actually a problem that is forcing the prices up, or is there a greedy hand forcing them up!  No matter what, I found the following picture of the new gas gauge quite snicker worthy!!  I am amazed at the people who dream up these pictures!! Hope you get a smile from it as well.  Good night! 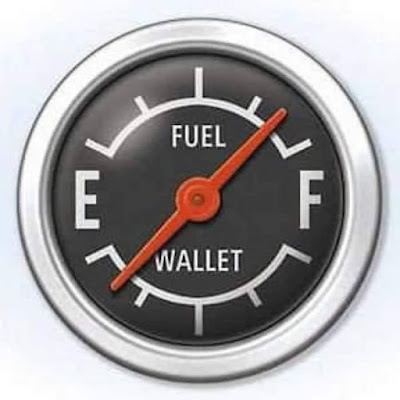 Posted by Lorne Green (A Place Called Away) at 17:00:00
Email ThisBlogThis!Share to TwitterShare to FacebookShare to Pinterest