A trip to the Liberry

Charlie and I headed out on a morning walk as usual today.  Difference was we walked down the wash from our site and the sides were cliffs so we had to walk all the way to the other end to get out.  We didn't know it yet, but we had a neat experience awaiting us in the middle of our walk. 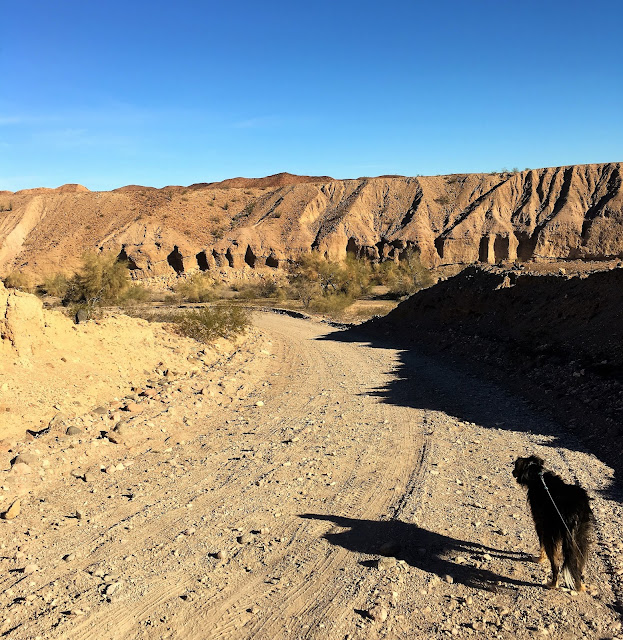 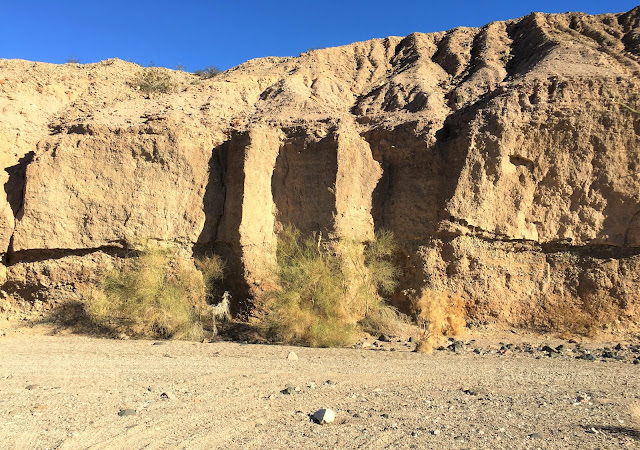 It was neat to look up on the top of the cliffs and see all the RV's along the top.  They have a good view of the wash. 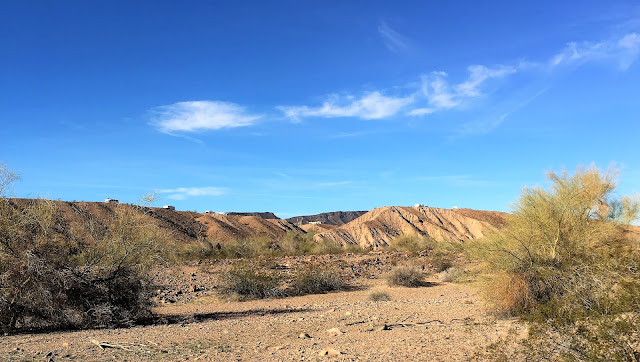 The bottom of the wash was very loose gravel and I wore my sandals for some unknown reason. 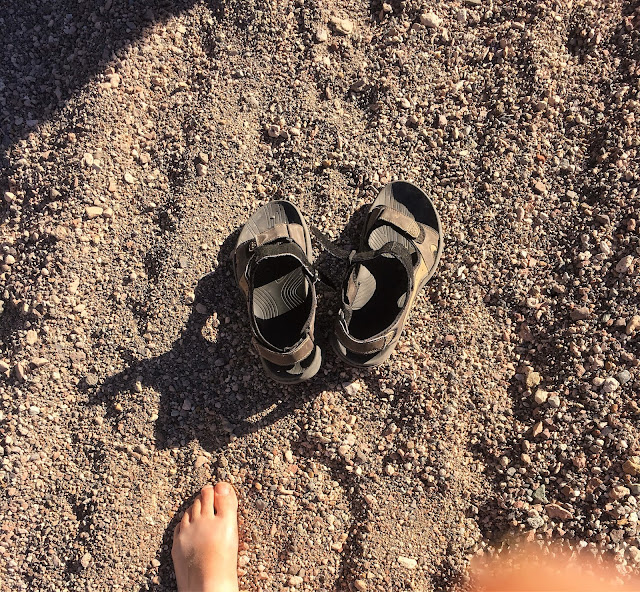 The wash went on for about 2.5 miles before we came to the reservoir.  Some spots were treed in and reminded me of a walk in the woods at home. 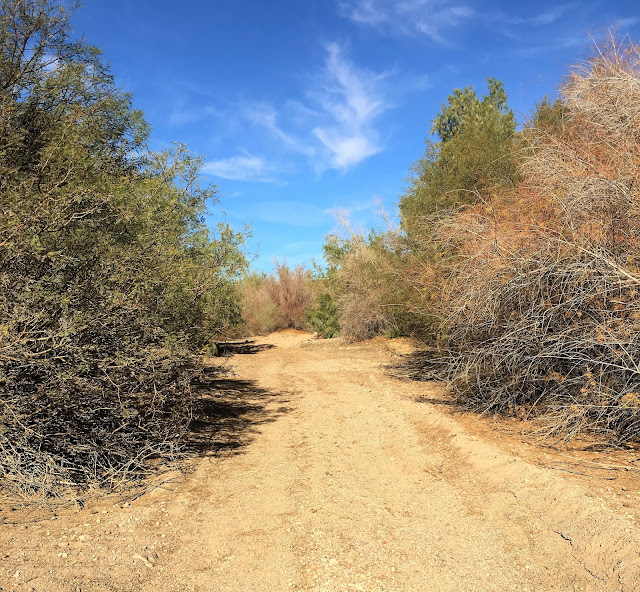 The Senators Wash Reservoir is the lowest that the locals have seen it in a long time.  Apparently the demand for irrigation water is great right now, and no one has replenished the reservoir lately. They have to pump the water in apparently. 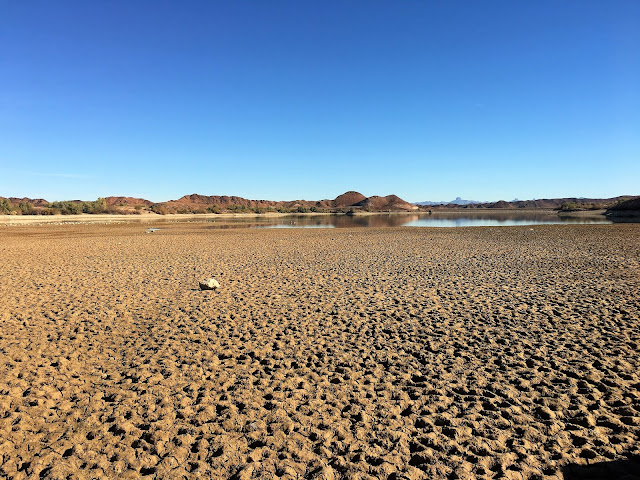 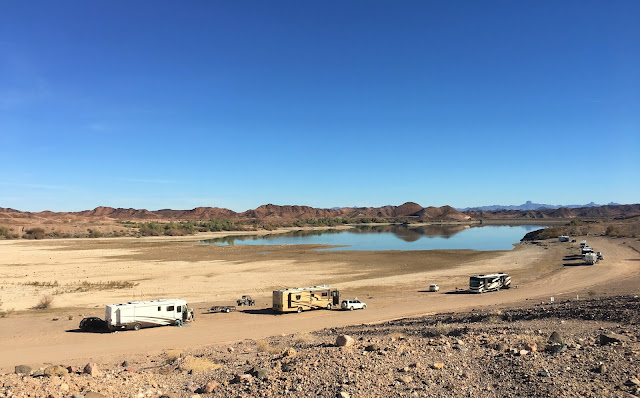 At the top of the hill is the front gate for the LTVA.  There is an office there and dump stations and across the street is a sign that says "Liberry".  So of course I had to figure out why someone would miss spell Library.  The lady at the trailer welcomed me and showed me the Liberry which was originally the blue trailer and had grown into a 25 ft airstream. 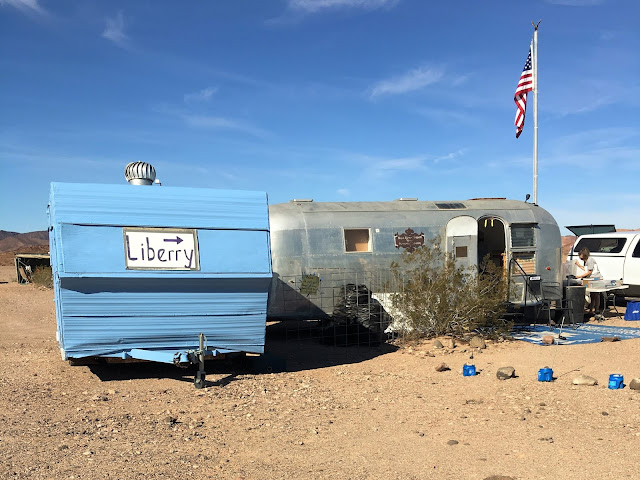 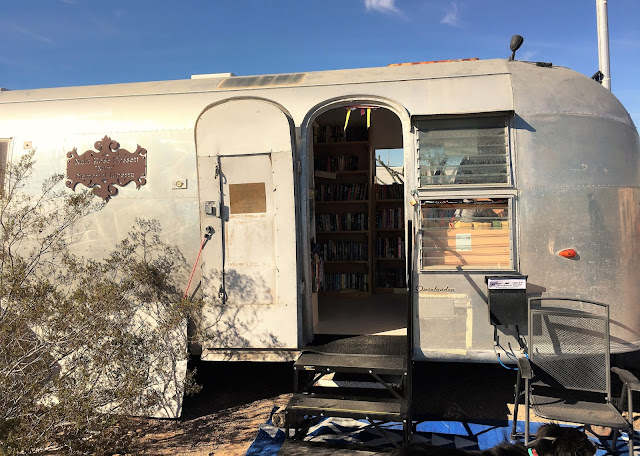 The inside was neatly arranged with a lot of different classes of books.  Lots of people who spend time in the desert read a lot of books to pass the time.  The rule is that if you take a book you bring it back.  They also encourage you to donate a book if you have one to grow the collection.  There is a free book exchange as well as a small recycling depot if you have any to drop off. 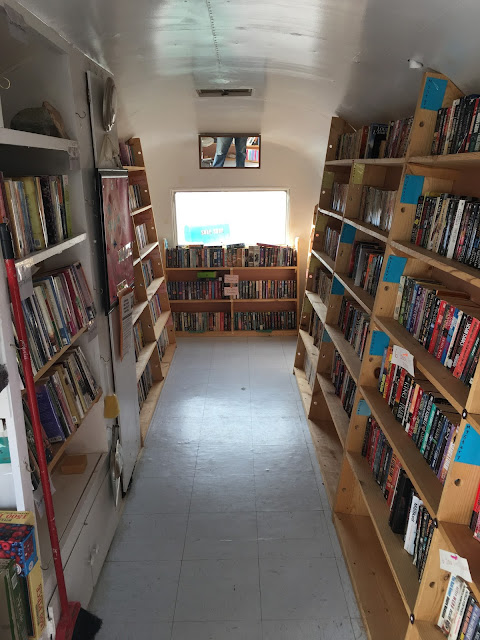 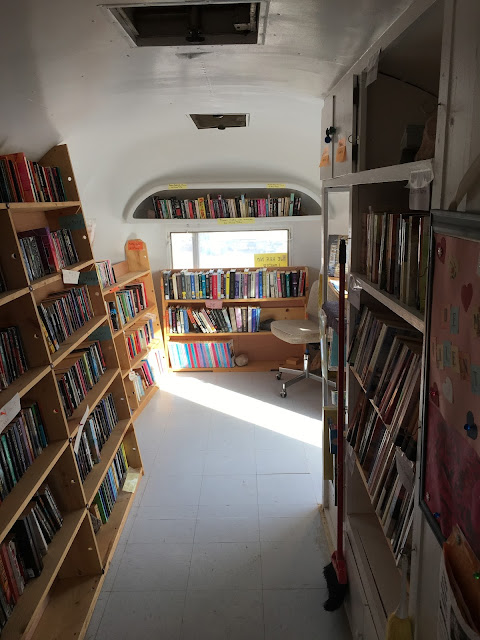 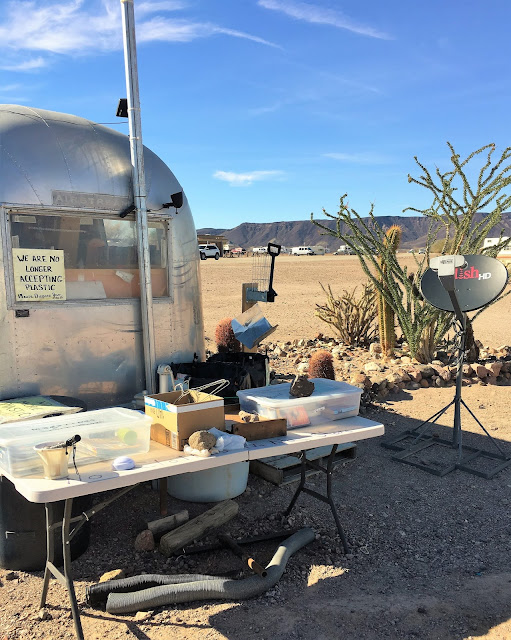 Now the history of the name is interesting in itself.   Apparently a long time ago "Nula Rose Dossett" began sharing books out of her small trailer.  As the demand grew, people began donating and soon she had a small Liberry.  Nula, or "Nitro" as she was known by the locals, had a speach impediment which prevented her from saying Library clearly, so it came out as Liberry.  Everyone just went with it and it was always known as that.  As the popularity of the Liberry grew someone donated an airstream trailer and more books were added to the collection.  Nitro passed away in 2003 and the Liberry has been kept open by a very lovely lady from New Mexico ever since.  It is closed in the summer but runs from October to May each year. 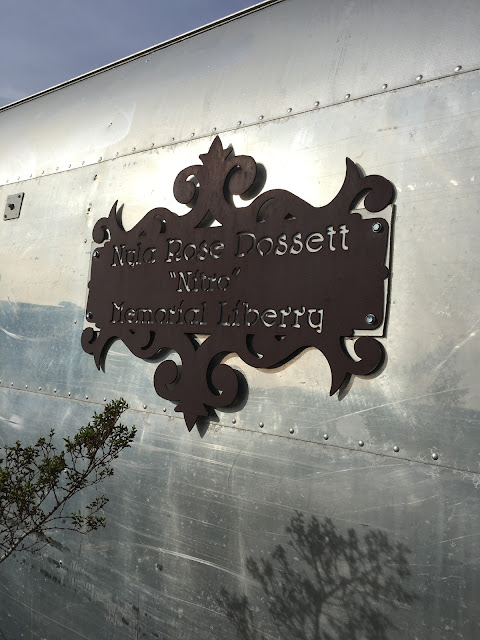 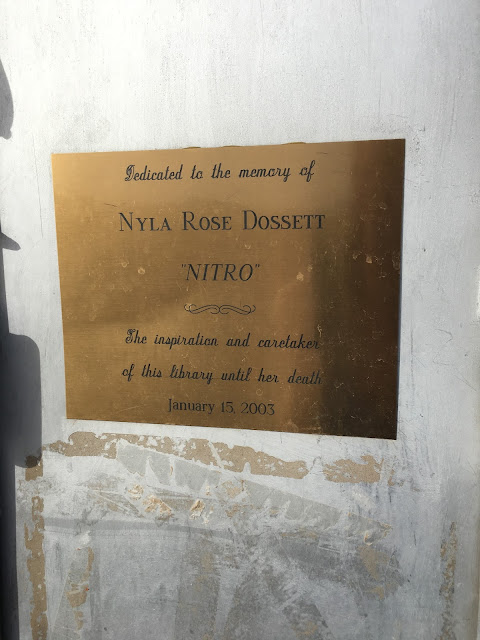 After Charlie and I finished our 5.8 mile walk we were ready for a late breakfast.  French toast was in line and the neighbours joined us.  The dogs kind of took over our house, but we don't care. 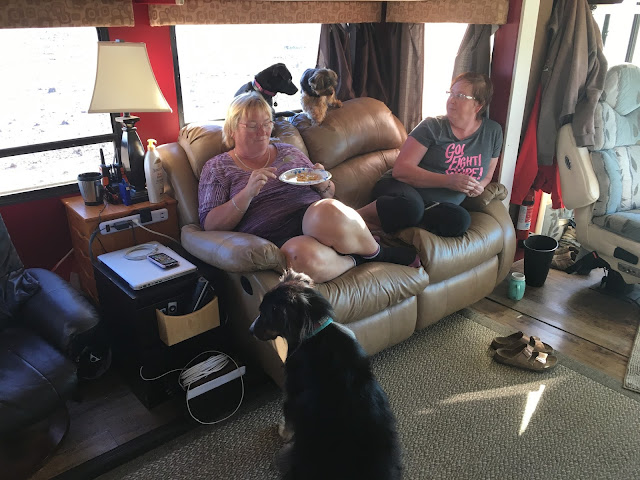 After breakfast we headed down the the North Shore of Senator Wash Reservoir where the water is a little deeper.  We got the kayaks out again today and paddled around some more.  What a lovely spot and a great day with friends again. 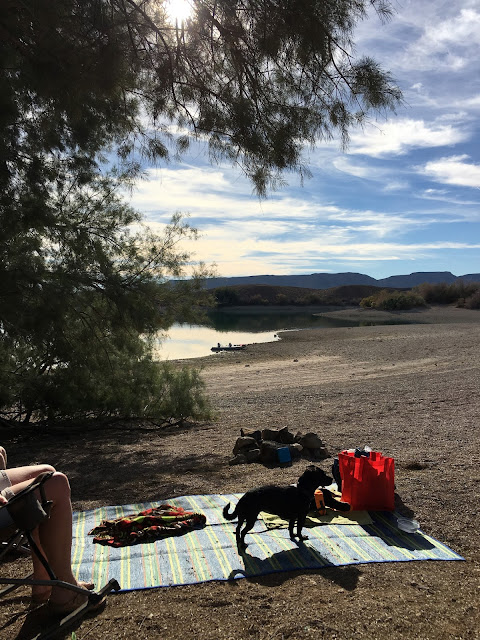 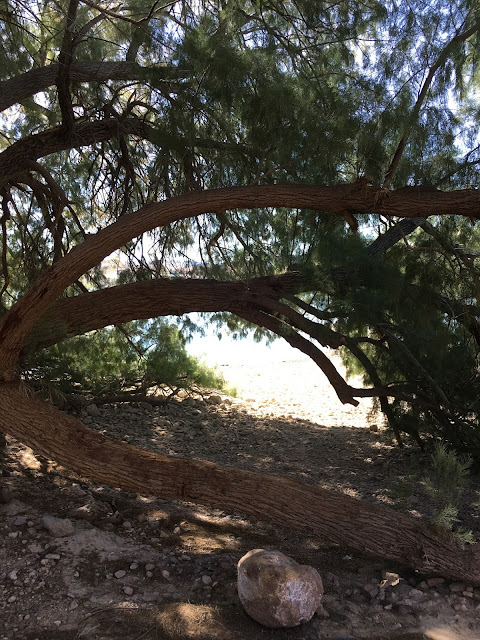 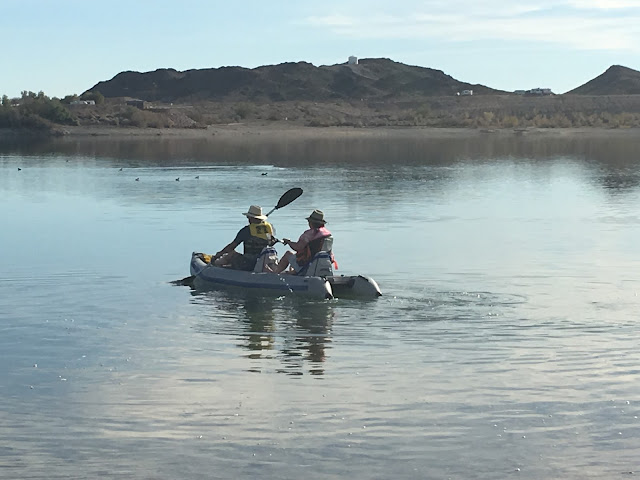 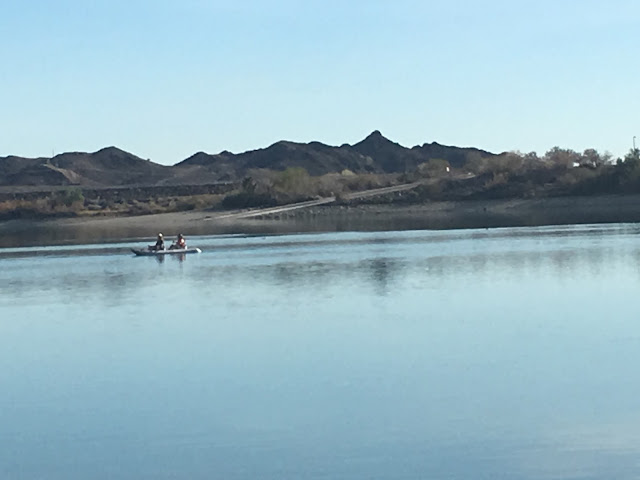 We finished the evening off with another great bonfire.
Posted by Lorne Green (A Place Called Away) at 21:07:00
Email ThisBlogThis!Share to TwitterShare to FacebookShare to Pinterest