A Trip up in the Hills

WHERE ARE WE? La Penita, Mexico
Our day started rather early because Jeff and John and Normand and Suzanne are all heading to El Monteon to get their vehicles painted.  Well not John because he just had his done, but he is going to pick everyone up.  I'm interested most to see Normand's RV.  They spend a few days last week removing the decals and sanding the exterior and now they are putting it in their shop (if you could call it that) and painting it.  So far, all their work has looked awesome. 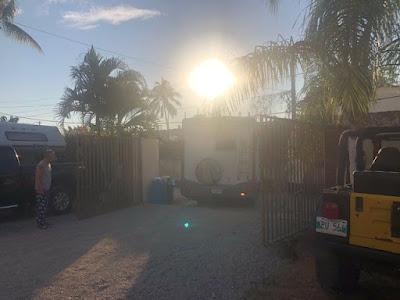 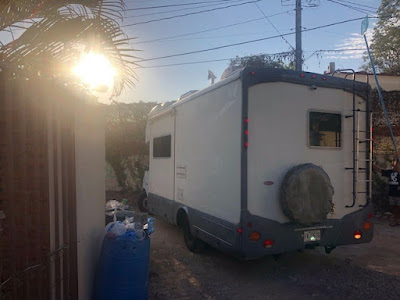 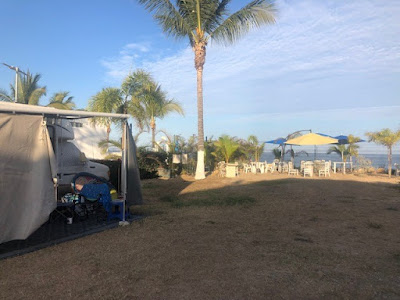 Today Emma got a haircut.  Lauren does the grooming herself with Johns help and she does a bang-up job.  Emma likes to swim in the ocean, so this will be a good cut for her. 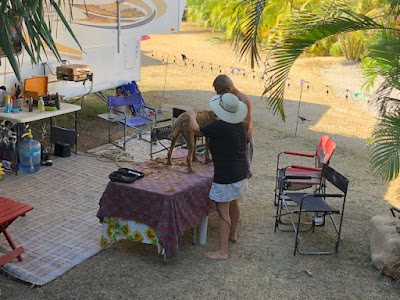 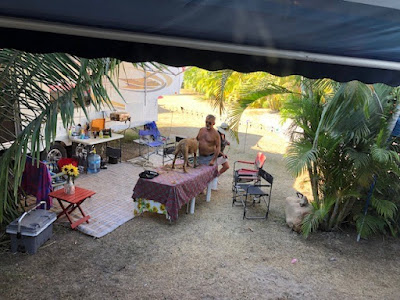 Sue and I thought today would be a good day to explore up in the mountains.  There is a lookout point where you can see back down on La Penita and Guayabitos.  So, we set out about lunch time on our adventure.  Most of our trip will be on bumpy back roads with narrow rutted trails and some cobblestone parts. That is where you get to see some of the most interesting things.  I'm not going to explain to you all the details but rather just show you where we went.  The pictures don't always show it well, but we were in some pretty high and rugged areas. 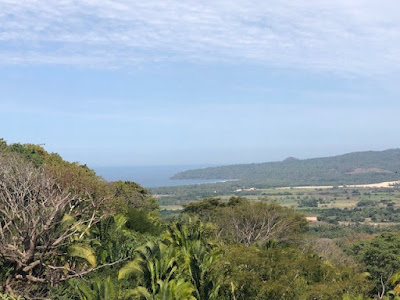 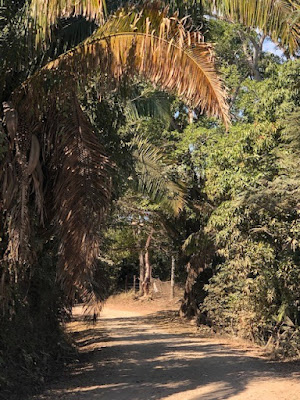 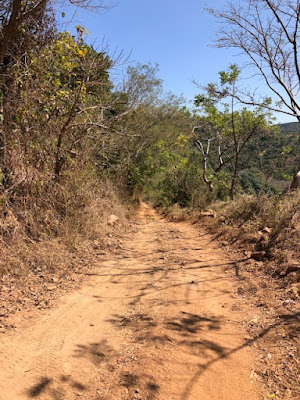 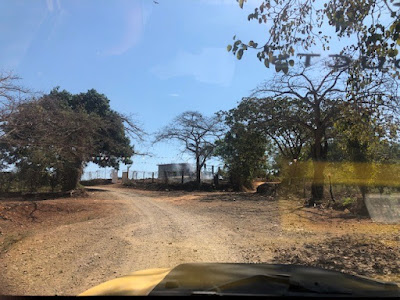 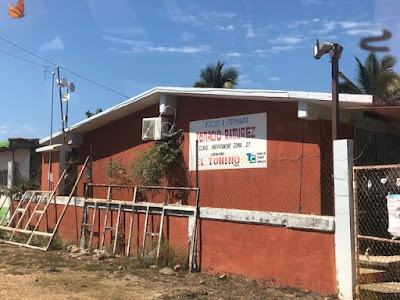 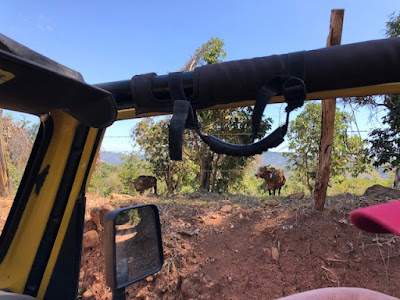 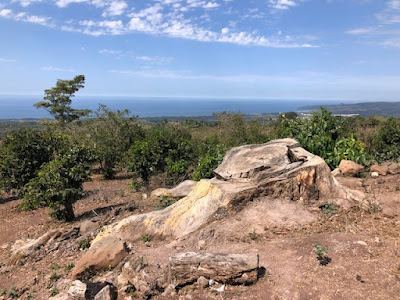 Archie had a good time, I think.  He liked to bark at and grab at the tree branches swishing by him.  It was annoying enough that we had to use the bark collar.  He is such a shorty that he has trouble seeing out the back of the Jeep and looks so silly!! 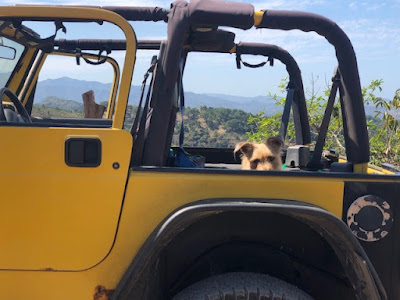 We actually passed the viewpoint on our way up and ended up way back on some trail in a gorge that was tough enough that I decided to turn around and come back when we had a buddy.  It's always better if there is another vehicle in case of a break down.  We don't feel unsafe out there but rather it would be a huge inconvenience to try to get back to town if we were immobilized for some reason. There are always people using these roads either on foot or horseback, or in junky old trucks and any one of them would do backflips to help us out.  They would take us to their house and feed us and give us a blanket to sleep on, I'm sure.  Anyhow we opted not to try the Mexican overnight experience and turned around.  Once we go back to the better road, and that is a relative term, we found the viewpoint.  It looks like a private lane, and probably is, but there is a parking area where you have a great view out over the towns and ocean. 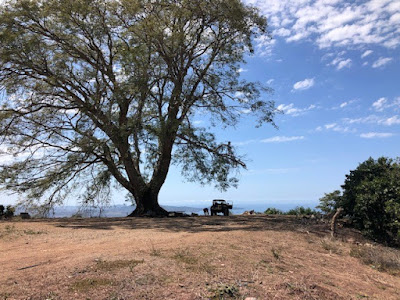 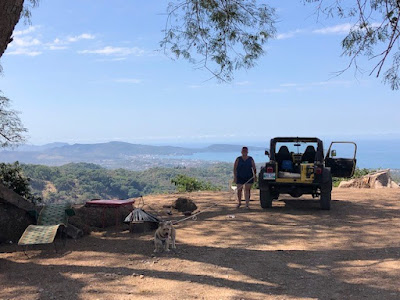 As you can see, it was quite hazy today, so the pictures were not great, but we stopped and had a little picnic and talked about what we were looking at.  There was a grinder sort of thing there which had been abandoned and rusted out.  I have no idea what it ground.  There was not coffee nearby that I could see. 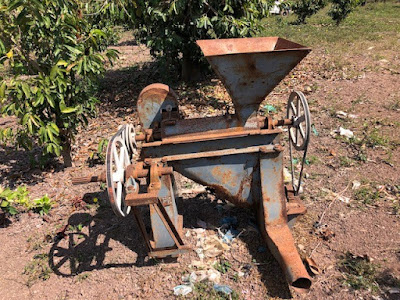 We got back to town about 2:30 and were a bit hungry, so we stopped at a little taco place that had a shady spot for Archie to sit and be cool.  We sat down and there was a bit of banter between the lady and her son.  We finally figured out that they were trying to close down for siesta and although they told us they would serve us, their eyes really said, come again another day.  So, we left graciously and went home and made a snack there.  A bun with peanut butter trumps a taco any day.... NOT!!! 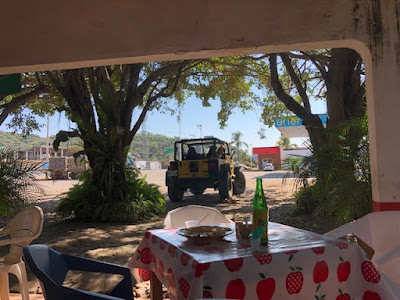 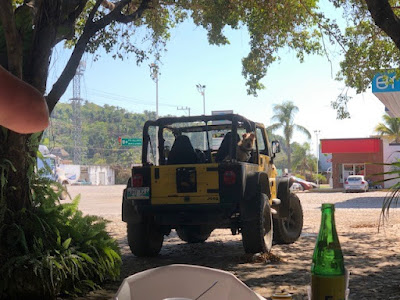 We decided that since we only ate peanut butter this aft, we would order a fish dinner from Ceci up at the Trailer Park.  Her and Ada and Litzy put on suppers every Monday night and the Trailer Park is allowing us lepers in there to partake of the festivities now.  LOL!!!  It is nice to see their smiling faces again, and I had a nice visit with George and Henny while I was waiting. 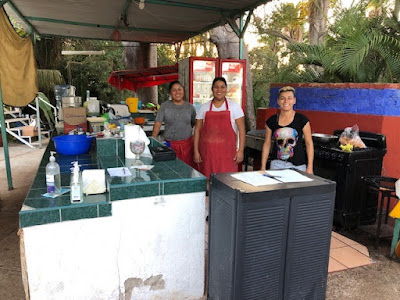 We missed the actual sunset tonight which apparently was spectacular but did manage to catch the afterglow which was a crimson red tonight.  I'm sure that was because of the haze in the air that we saw up on the viewpoint.  Hope you had a great day too!! 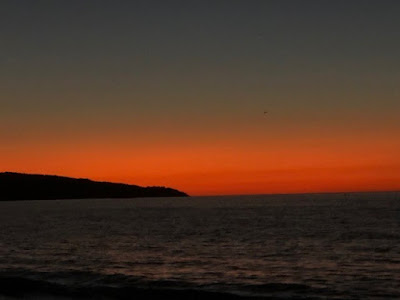 Posted by Lorne Green (A Place Called Away) at 19:39:00
Email ThisBlogThis!Share to TwitterShare to FacebookShare to Pinterest