Today was Bra shopping day.  So why did all you guys come to check this out?  Did you really think I was going to post a bunch of pictures or do a commentary on the fine art of choosing a bra? Shame on you guys. Ha Ha.   But now that you are here, I'm going to tell you what Harold and I did while the girls went bra shopping.  Before everyone left we all discussed the days plan around the fire pit. 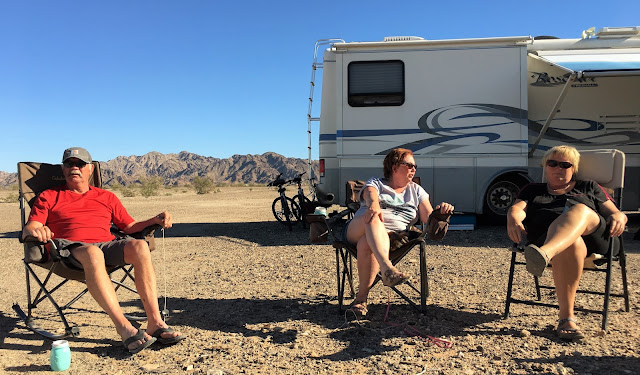 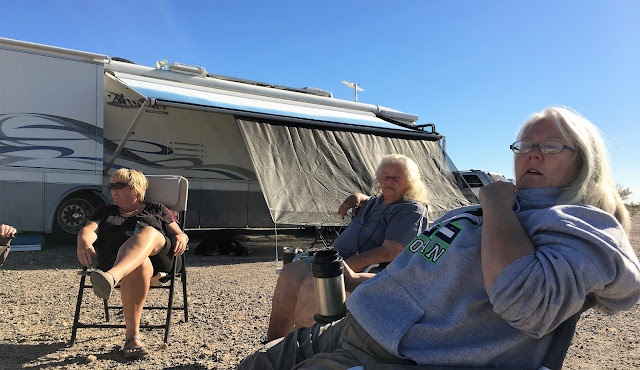 Harold and I headed out to check out a neat museum up the Imperial Dam Road north of Yuma.  We spotted it on our way when we moved from South Mesa to Ogilby Road so we decided to go back and check it out. 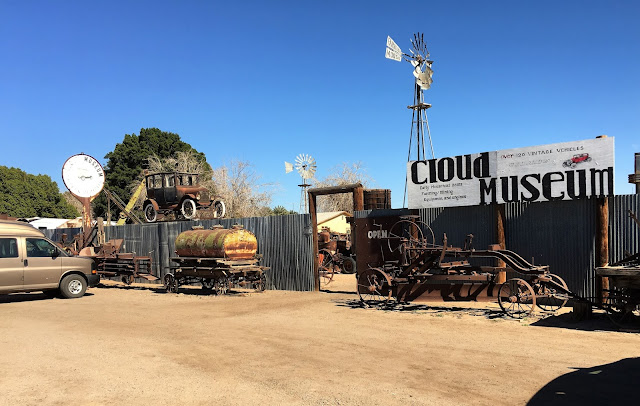 This museum is operated by a local farmer Johnny Cloud who has gone out and purchased all of the items over the last 27 years.  It is called the Cloud Museum and Johnny is there to collect your $5.00 donation and answer any question you might have.  Harold and I bombarded him with questions about everything from farming to irrigation to history of the area, and he was all too gracious to answer all them to the best of his ability. 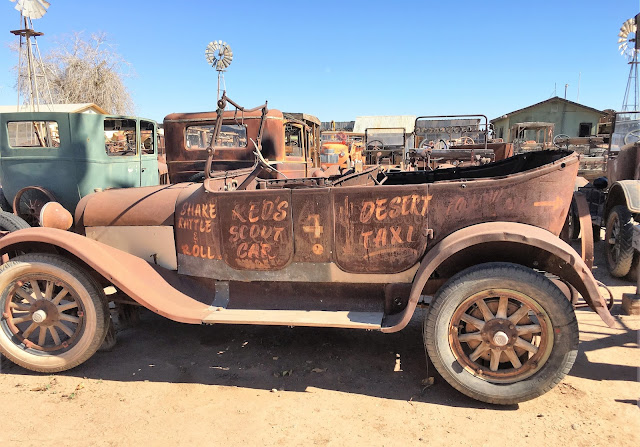 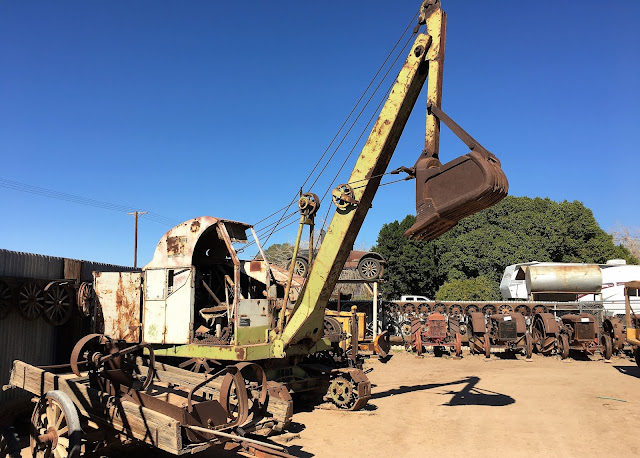 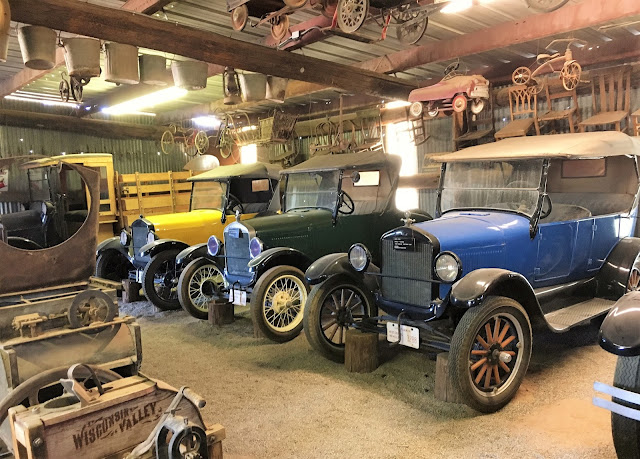 There were lots of buildings with interesting things in them and one had a replica of an old living room complete with a piano. 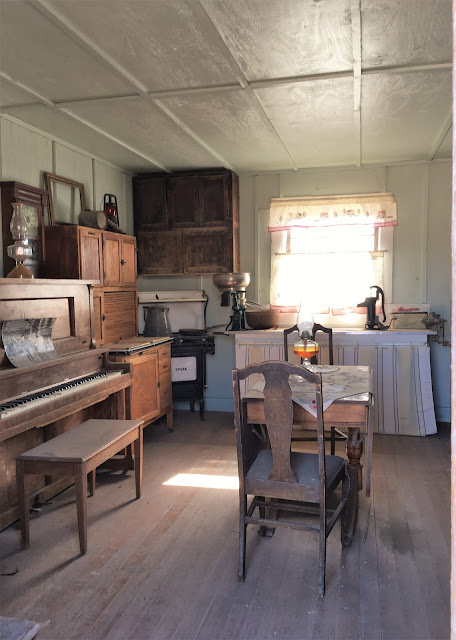 It reminded me a lot of my grandparents old house and it had that old house smell that I remember so well.  Being a tinkerer on the piano I was drawn to it.  Before I could tickle any ivories, I was drawn to the picture!! 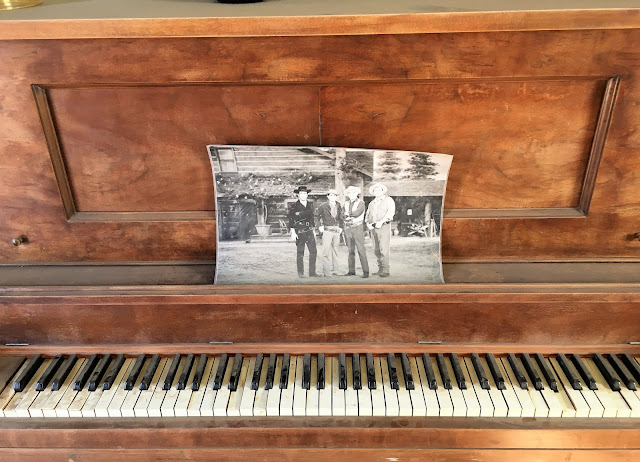 How ironic that there should be a picture of the whole Ponderosa clan.  Anyone that is my age will recognize Lorne Greene (Ben Cartwright) and his boys from Bonanza, or Ponderosa.  Lorne is my namesake of course so that made my day. 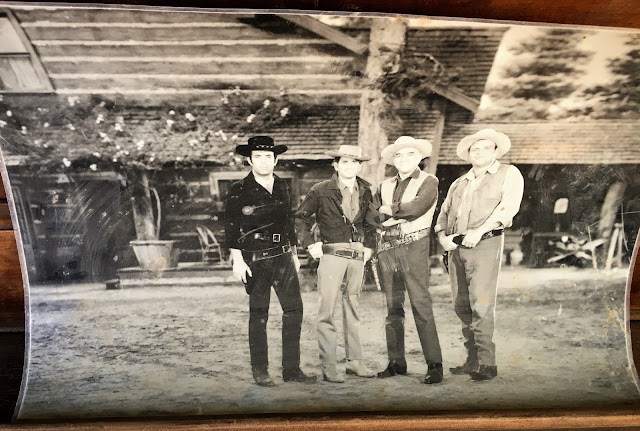 After that little moment we moved on to the rest of the museum.  There were lots of old cars and trucks and busses there and not many of them had been restored to any extent. 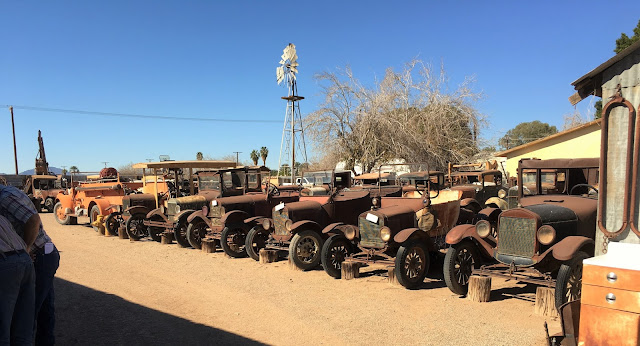 I saw Johnny around the corner so went to ask him a question.  I asked "what percentage of these would still be considered in running condition"?  I was flabbergasted when he replied "100 percent".  He said that every vehicle was driven into place by him at some point, and he said with a new battery and a little choking they would all start.  How amazing is that.  To prove it Johnny said there was one over a piece that he had just taken a battery to, and he would start it for us.  And guess what??  A couple cranks and a little advancement of the magneto and away it went.  It purred like brand new. 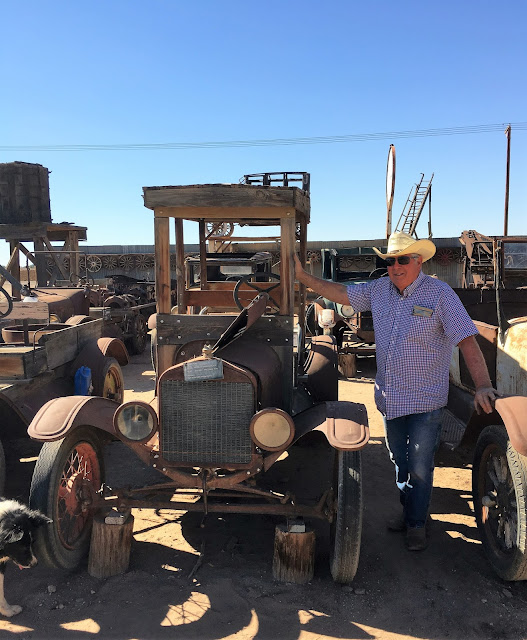 Over in the corner was an old gas station and something caught my eye. 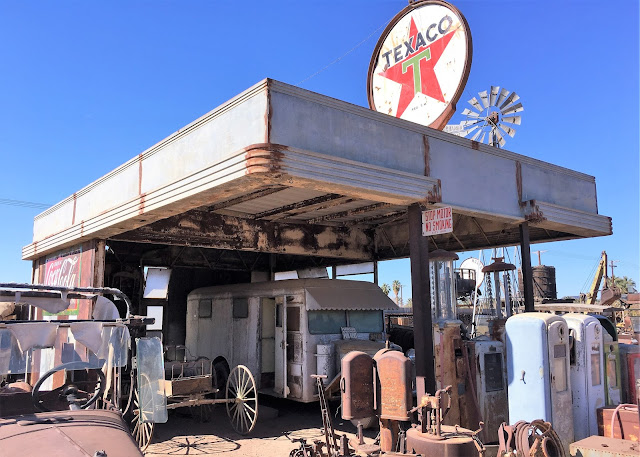 Heres what the sign said in front of it. 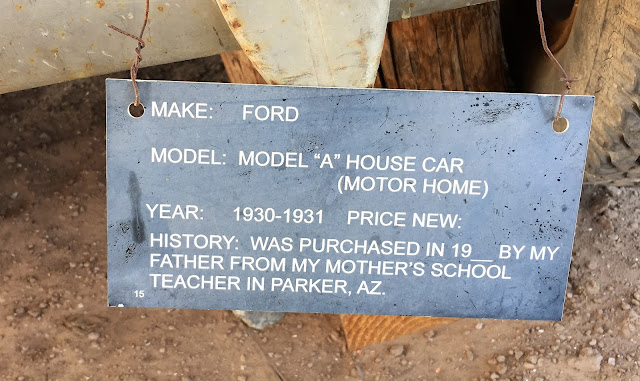 For all us RVer's, here is our history in pictures. 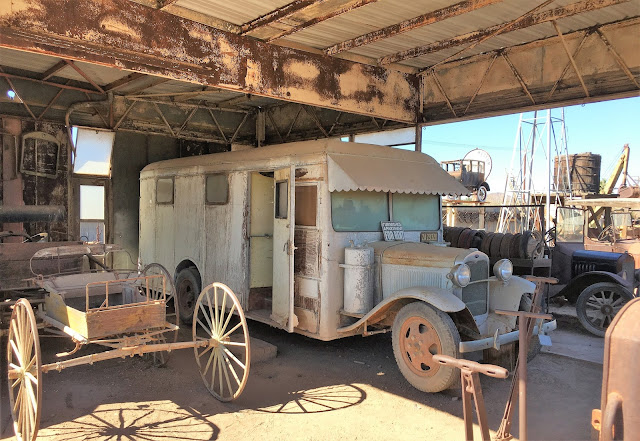 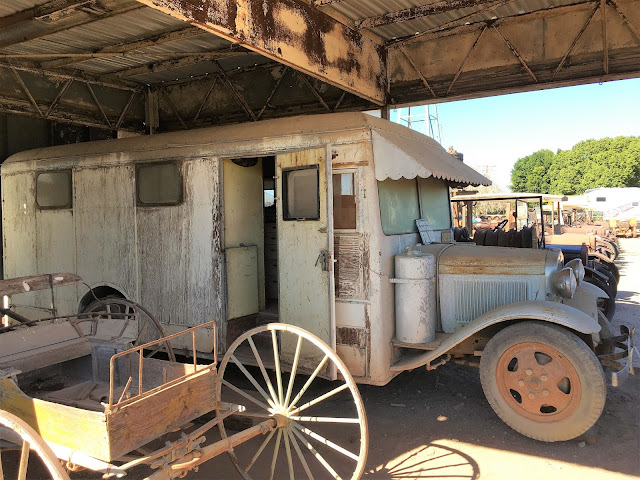 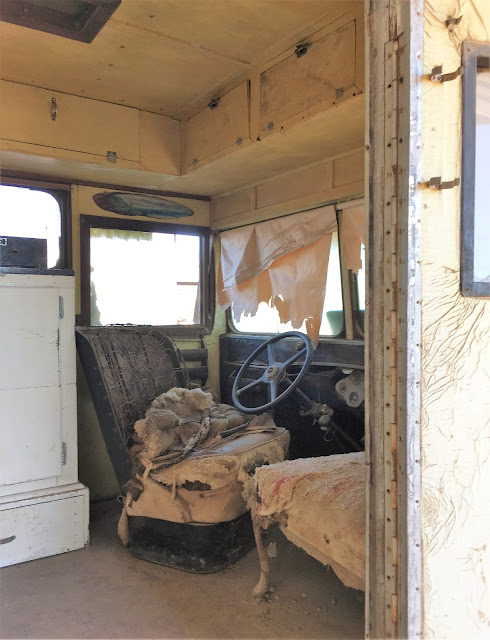 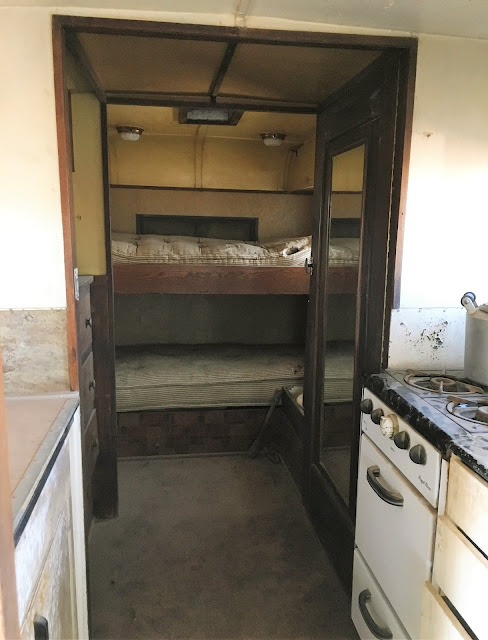 After the tour of the museum, we headed into Yuma to get the truck washed.  We found a nice little car wash on 24th. 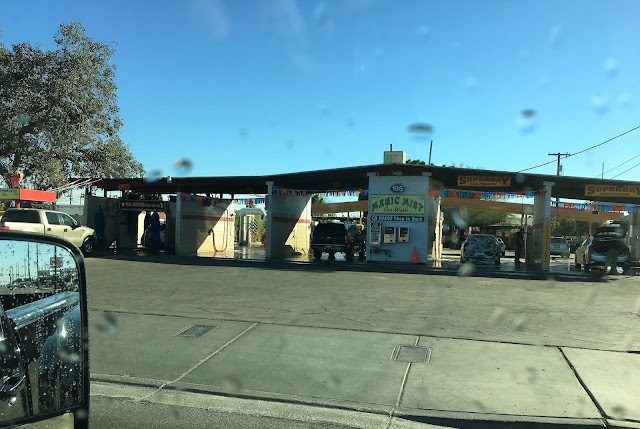 When we headed out for Ogilby Road, Harold said lets go see the dunes just down the interstate from the junction of I-8 and Ogilby Road.  We saw lots of dune buggies tearing up and down the hills and drove west for about 10 miles checking it out.

We turned around and headed back, and Harold looks out to the south and says "What is that out there"?

I'm sure your eye is drawn to the vault toilet at first, but look a little farther in the distance.  I am talking about the long dark line.  I was not aware of the magnitude of the existing US/Mexican wall.  For any of you that think that the current US President has come up with some really stupid idea of a wall between Mexico and the US, it is time to do a little research.  There is currently 580 miles of fence/wall between the US and Mexico and it was built beginning in 1994 under the Bill Clinton administration.  I guess I am just a dumb Canadian but there seem to be lots of people who are not Republicans throwing a lot of mud about a wall, when is was a democratic government that started what is here today because they thought it was a good idea.  How can such a good idea become so bad in such a hurry.  That is politics I believe and ain't nobody got time for that anymore.  Time to take care of business maybe.  Just an outside observation.  Check it out for yourself at Wikipedia story of the Wall. 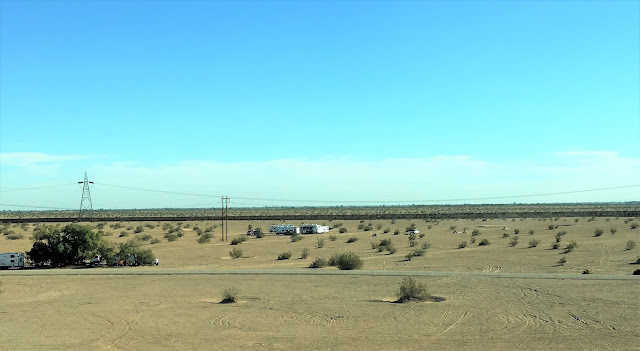 Based on what I'm told and the picture I found, the wall goes clear out to the ocean. 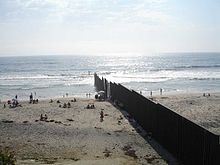 Speaking of Mexico, we headed out to the car races at Cocopah Speedway which is quite close to the Mexican border.  We love dirt car racing and this track did not disappoint. 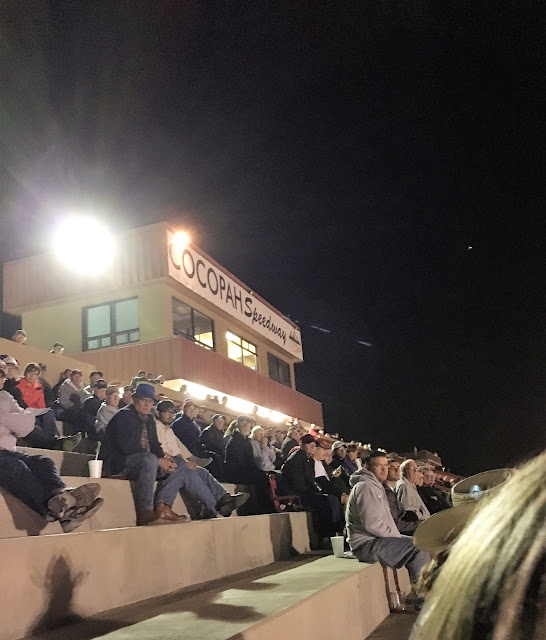 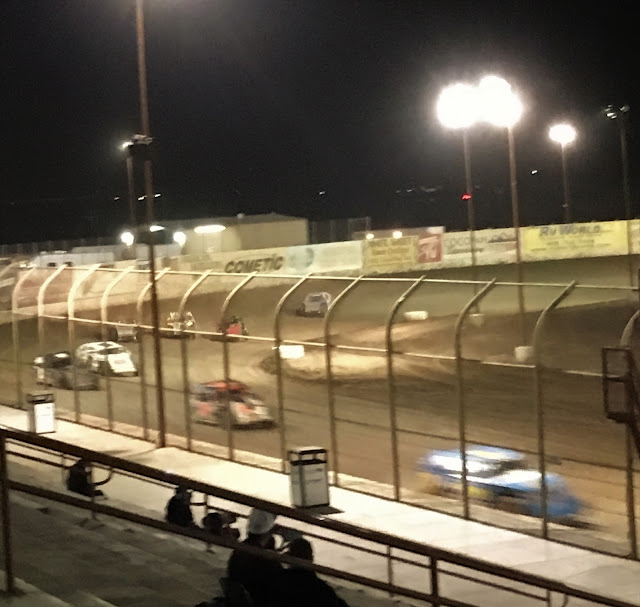 And unlike how we are supposed to teach our kids about winning and losing, THERE WAS A WINNER, and he got a trophy and some money.   And the rest went home losers and got nothing. lol 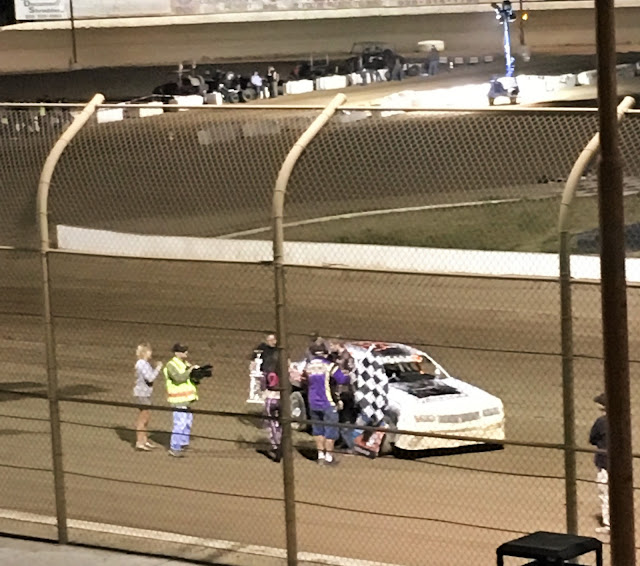 Ok, enough of my ranting.  Susan says its time to quit and go to bed.  And I did see a new bra hanging in the closet so the girls shopping trip must have been a success.  Goodnight.
Posted by Lorne Green (A Place Called Away) at 20:21:00
Email ThisBlogThis!Share to TwitterShare to FacebookShare to Pinterest