I told you yesterday that Kyra wanted to move before it got windy and she was so right.  Today was a nasty day with cool temperatures and windy so we are glad we listened to her.  We decided to head into Henderson to Costco to get some supplies and to kill some time.  Our first view of the Las Vegas strip from the hill out by Henderson was nice and always makes us think of wandering the Strip.

The girls got me to go into the store with them by telling me that today was a great day for samples.  There wasn't as many as I had hoped but the ones they had were quite tasty. 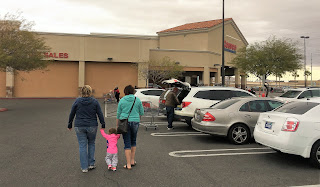 The jewelry department really surprised me.  I didn't expect to see these kind of prices in Costco. I'm sure the most expensive thing in the store back home is about $499.00.  I'm wondering what the girl who gets one of these for a gift might say when the guys says "I bought it at Cosco!!" 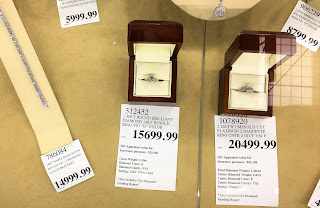 Susan stayed home this evening so that Kaitlyn and I could go walk the strip.  Kaitlyn has never been to Vegas so we wanted her to see the Strip at night.  We parked at the Flamingo and headed out on the strip. 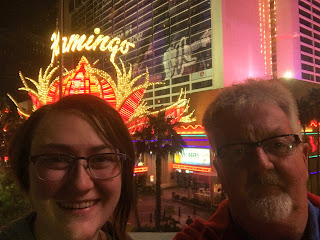 First plan of attack was the fountain show at the Bellagio. This is a standard tourist attraction on the Strip.  I always marvel at how Vegas just bleeds money. 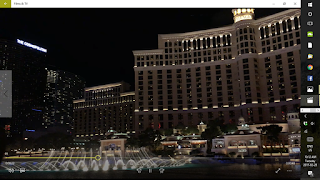 While we were watching the show an illusionist set up behind us.  He was doing a levitation thing which was quite impressive.  I don't mind putting a dollar in the bucket for this kind of entertainment. 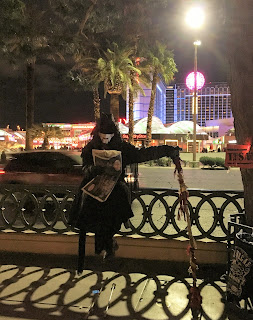 We walked  up as far as New York New York and across to the MGM and back down to Harrahs.   On the way we stopped by the Paris and decided to go up in the tower if it wasn't too expensive.  We checked the board and it said $14 bucks for Kaitlyn and $10 for this geezer so we thought that wasn't too bad.  We knew we wouldn't be up there long because it was quite cool with a breeze so we went in to buy our tickets.  The lady punches it in and says $39.00 please!!!  I questioned her mathematics but she said the rest was tax.  In hindsight we should have said no thanks but we were set on going and besides 60% tax is not that bad in VEGAS!!!!!  So be warned if you are going there, the price on the board is not the price you will pay in the end.

The lady in the elevator on the way up told us that the tower itself without the casino, cost $28 million to build in 1999.  She said that elevator fees alone paid for the entire construction of the tower in 2 years.  So that is $15 million a year to ride the elevator.  It has been running for 15 years since then so that is $200+ million dollars generated.  It is mind boggling to think how much money is taken in by all of the attractions and casinos in one single night.  Well we managed to drop $100 bucks and got nothing but a fridge magnet. 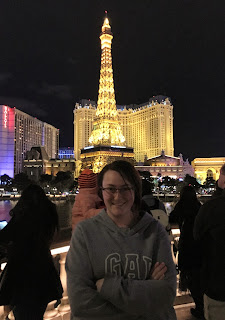 From the tower we watched a water show at the Bellagio and had a good view of the entire strip.  The whole atmosphere was not quite right tonight, because it was so cold and also it was a Monday, and there were very few people out and about.  We still enjoyed the experience but destroyed a lot of shoe leather in the process.  15000+ steps. 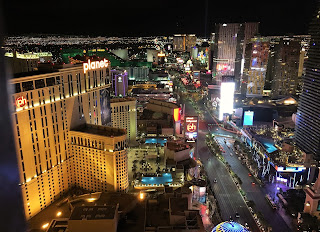 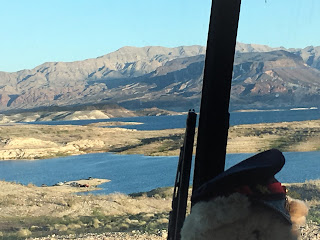 Posted by Lorne Green (A Place Called Away) at 10:22:00
Email ThisBlogThis!Share to TwitterShare to FacebookShare to Pinterest