How to make money if you own a campground

We are on day 2 of our journey from Magnolia Beach Texas to Tucson Arizona.  We hope to be there on New Years Eve day. As of this morning we still had about 750 miles to travel. 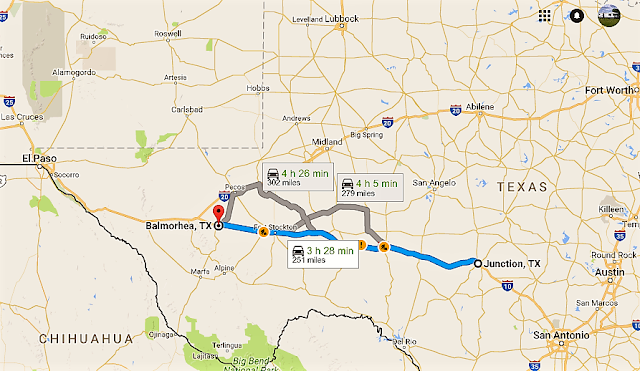 After all of the good experiences we had yesterday in Junction Texas and the nice spot in Junction City Park to rest last night, we got a sour taste from one over zealous public works employee at 7:30 am.  He basically made sure to tell us that we were not welcome there and we had parked in the wrong spot, the wrong way around, and that there were lots of people coming right away who needed our spot to park while they fish.  It was not that he was wrong in his facts per say, but his delivery was brutal.  So being a bit defiant, we postponed our departure for a couple hours to witness all the people coming to fish, and guess what??? Not one single person showed up by the time we left at 9:30 am.  A lot of places try so hard to promote their areas by expensive promotions and suit and tie dinners, and they forget that the guy who picks up the garbage can drive people away if he is not told that he is an ambassador for the town and area.  He is probably one of the first people they see and can make or break the experience for them.

The plus to the whole thing was that I met this neat young man named Roman from Moscow, Russia. He told us that he and his girlfriend are touring the USA for 6 months.  They are really enjoying themselves and share the theory with us that there is no better time to see the world and do the things you want to, than right now. They are basically traveling the same route as us so he promised to knock on our door if he ever sees us along the road.  Safe travels Roman.

Texas is a big state and there is a lot of different landscapes as we travel west.  This one shows some of the rugged terrain. 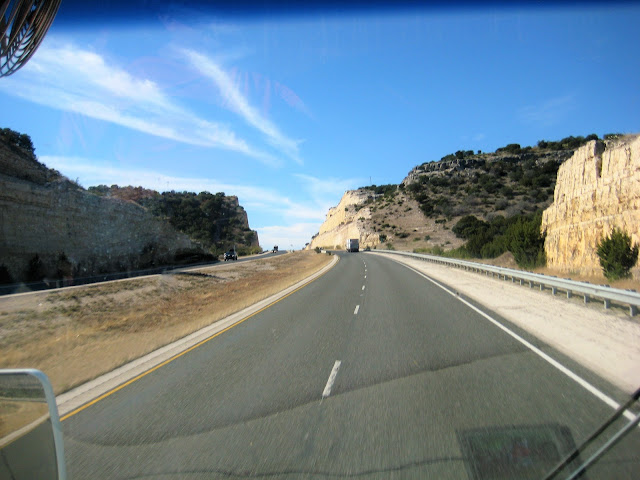 This blurry picture shows what the speed limit is on this interstate.  Sue will only allow me to do 60 mph.  The picture would have been really blurry if I was doing 80 mph. 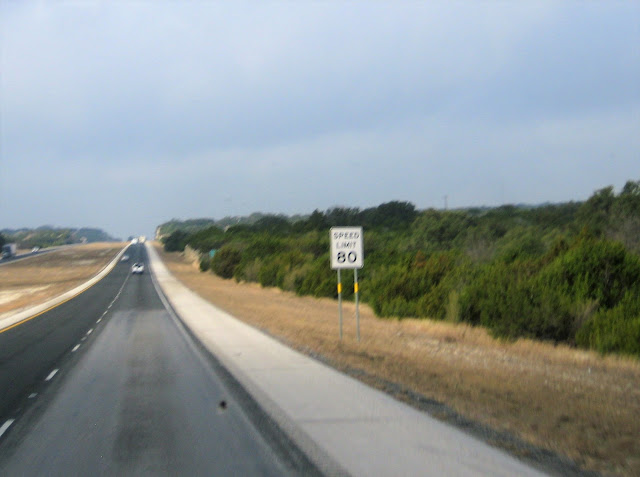 Once again Sue found us a great little spot by a lake.  Now in this part of Texas, a lake is a rare thing.  This one is a man made one with a big dam across the shallow valley.  I would guess it was put there for irrigation as there is lots of farm land around here.  To start out with, our Free Campsite app said that it was free to camp.  Just find a spot and camp.  Well as we get there, the signs say you must get a permit from the store.  So I stop at the store and ask the happy lady.."can we get one of them thar permits"??  She says..."are ya'll gonna need to hook up"? and I says "no".  Well that will be 5 dollars per person then for the day so I peeled out a 10 dollar bill.  I guess that is where the 5 bucks a day comes in.  Well she says, that is only good until midnight.  After that it is a new day and it will cost you another 10 bucks!!!!  Now that is a real entrepreneur if ever I saw one.  If you want to stay overnight, you have to pay for 2 days unless you want to get up and leave at midnight.  Wow!!!!  So it is costing us 20 bucks for the night, so we are gonna hang around a while tomorrow and leave in the afternoon to try to get our moneys worth.  Here's where we are. 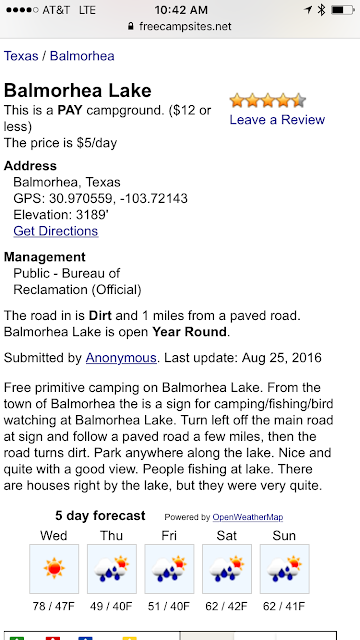 So I got to fly the drone some more tonight and got a nice shot of where we are camped.  There are lots of ducks, geese, mud hens, herons, coyotes, and a bunch of cows around here.  It sure sounds nice. 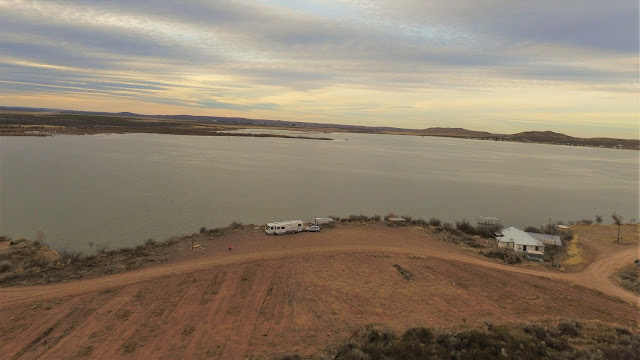 Sue took a couple shots of the lake as well. 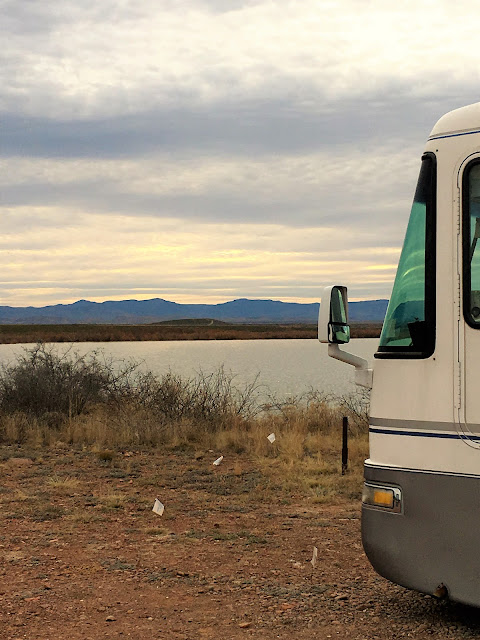 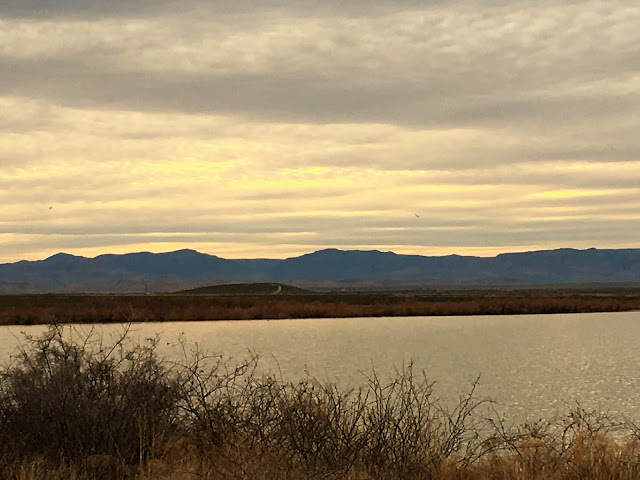 Tonight's view from our window.  I took the black tape off the window from Christmas and now am left with the glue to remove.  I looked everywhere but can't find the goo gone so will have to buy some tomorrow. 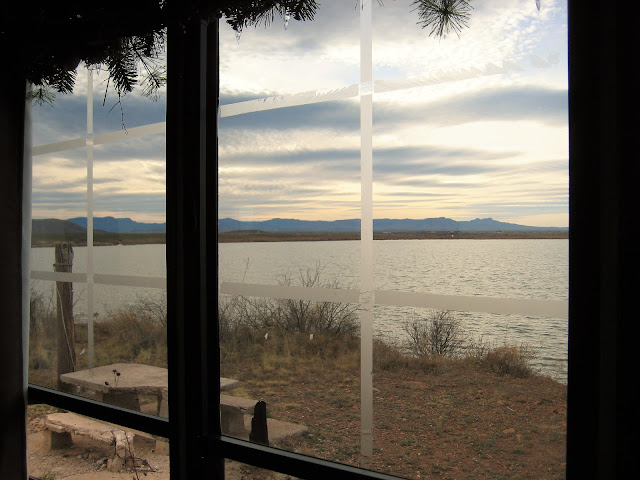 Posted by Lorne Green (A Place Called Away) at 18:59:00
Email ThisBlogThis!Share to TwitterShare to FacebookShare to Pinterest