Jesus was a Boondocker

Christmas 2016 has come and gone.  This was the first time we have been away from family and with the help of face time we survived.  The family back in Manitoba were all storm stayed where ever they were and did not get together as planned.  They are expecting up to 15 inches of snow there in the next few hours while we basked in 24C weather today on the beach.  Sue and I would like to wish everyone a very Merry Christmas. 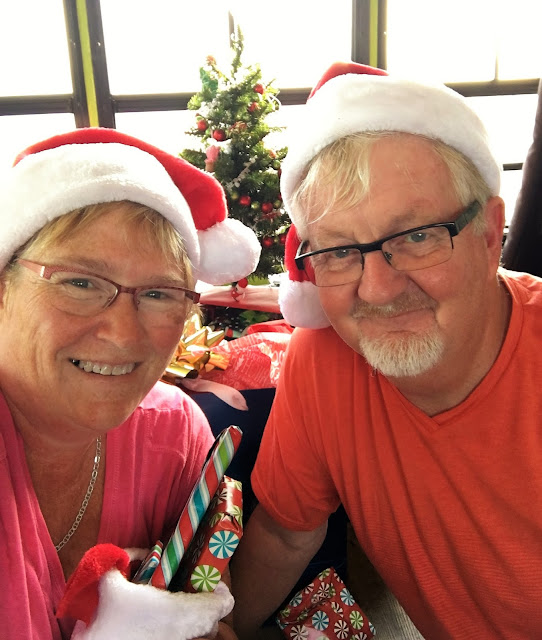 We both got our stockings first thing this morning.  Different types of stockings but none the less stockings.

Its times like these when we miss our little angel Clayton. This is the second Christmas without him and I like to think that he is smiling down on us like he was smiling at us on his first Christmas with us.  He was so happy with everything in life and I'm sure he is making everyone smile in Heaven.  We love you little man.

As I was listening to the Christmas story last night, I made a startling discovery.  Jesus and his family were Boondockers.  They didn't stay in organized hotels or campgrounds but rather stayed in a lowly stable.  There was no power or water or sewer and they had to fend for themselves.  They did not have masses of people around them but rather just the animals that were there.  And they had to go to their home state once in a while to pay their taxes.  So for all us boondockers, now we know the origin of what we love to do.

Let me leave you with the Christmas story as I believe in as being the true story.  It is good to hear it again and again.

The Story of the Birth of Christ
As told through Luke

Luke 2:1 And it came to pass in those days, that there went out a decree from Caesar Augustus, that all the world should be taxed. 2:2 (And this taxing was first made when Cyrenius was governor of Syria.) 2:3 And all went to be taxed, every one into his own city.2:4 And Joseph also went up from Galilee, out of the city of Nazareth, into Judaea,unto the city of David, which is called Bethlehem; (because he was of the house and lineage of David:) 2:5 To be taxed with Mary his espoused wife, being great with Child.
2:6 And so it was, that, while they were there, the days were accomplished that she should be delivered.
2:7 And she brought forth her firstborn Son, and wrapped Him in swaddling clothes, and laid Him in a manger; because there was no room for them in the inn.
2:8 And there were in the same country shepherds abiding in the field, keeping watch over their flock by night. 2:9 And, lo, the angel of the LORD came upon them, and the glory of the LORD shone round about them: and they were sore afraid. 2:10 And the angel said unto them, Fear not: for, behold, I bring you good tidings of great joy, which shall be to all people. 2:11 For unto you is born this day in the city of David a Saviour, which is Christ the LORD. 2:12 And this shall be a sign unto you; Ye shall find the Babe wrapped in swaddling clothes, lying in a manger. 2:13 And suddenly there was with the angel a multitude of the heavenly host praising God, and saying, 2:14 Glory to God in the highest, and on earth peace, good will toward men. 2:15 And it came to pass, as the angels were gone away from them into Heaven, the shepherds said one to another, Let us now go even unto Bethlehem, and see this thing which is come to pass, which the LORD hath made known unto us. 2:16 And they came with haste, and found Mary, and Joseph, and the Babe lying in a manger. 2:17 And when they had seen it, they made known abroad the saying which was told them concerning this Child. 2:18 And all they that heard it wondered at those things which were told them by the shepherds. 2:19 But Mary kept all these things, and pondered them in her heart. 2:20 And the shepherds returned, glorifying and praising God for all the things that they had heard and seen, as it was told unto them. 2:21 And when eight days were accomplished for the circumcising of the Child, His Name was called JESUS, which was so named of the angel before He was conceived in the womb.


Posted by Lorne Green (A Place Called Away) at 17:15:00
Email ThisBlogThis!Share to TwitterShare to FacebookShare to Pinterest