The Tale of Galena Gulch

Our travels today took us to near Boulder Montana by the name of Galena Gulch. This is near Basin where the Merry Widow Health Mine is located.  This is where people come to receive radon spa therapy. 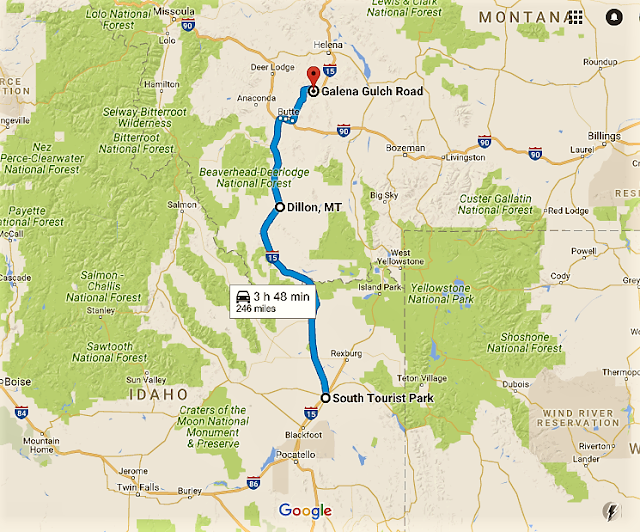 We started out the day in sunshine and looked out the window at the gophers playing by the Ponderosa.  I don’t think these guys have been awake very long because they were staying pretty close to their holes. 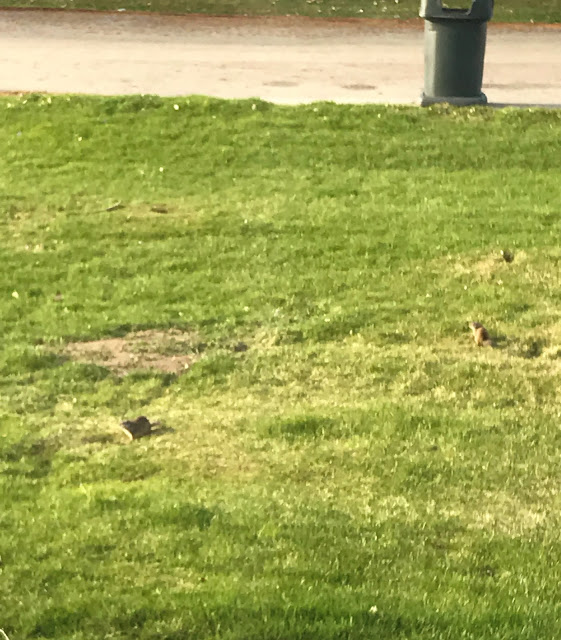 It wasn’t long before Charlie spied them through the window and wanted out real bad.  I quietly opened the door for him and he snuck out and then took off full gallop.  Sue almost got a picture of him running but only had one chance to get what she did. 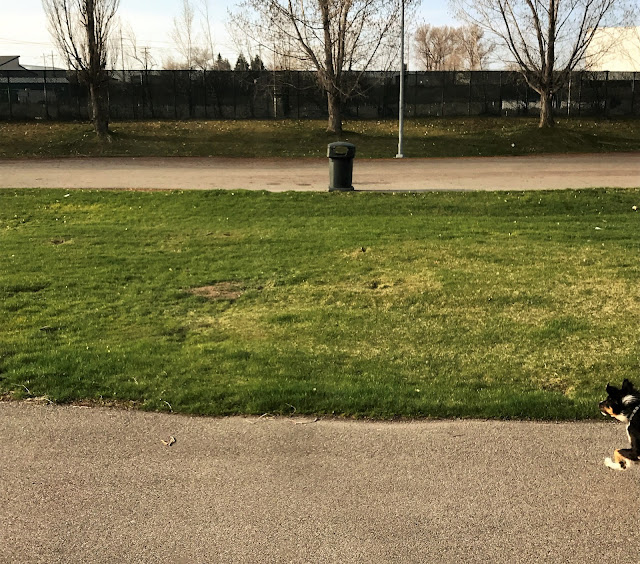 He spent probably 20 minutes out there sniffing in all the gopher holes and even did a little digging at one point. 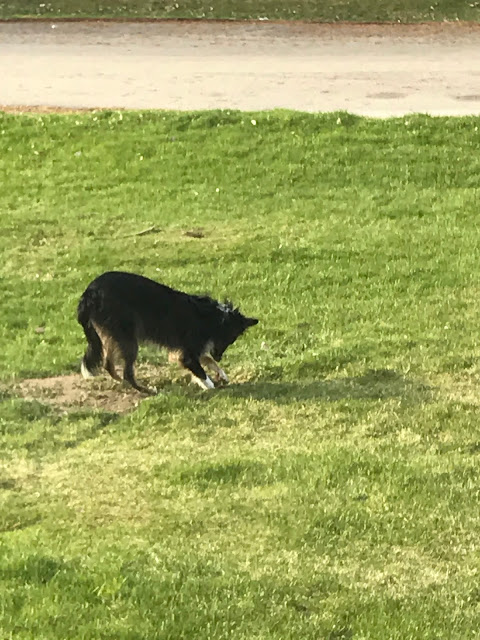 And we headed off with cell phone in hand to catch up on the latest facebook, and breakfast on the knee. 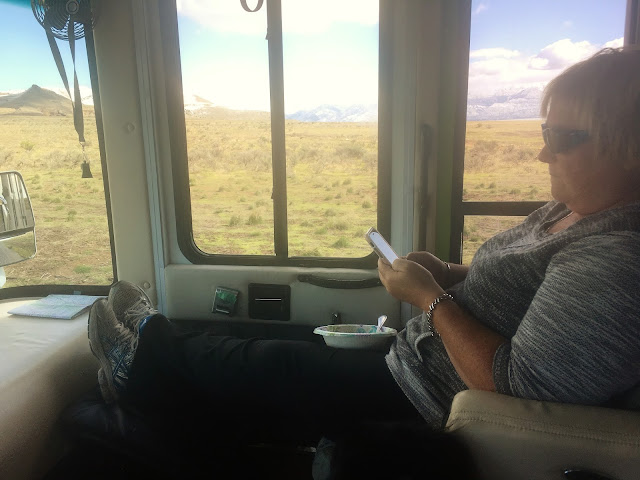 We climbed up the continental divide for about the 10th time this year.  This one topped out at 6800 feet.  It was about there where we caught up to the snow storm that has been plaguing the northern states. 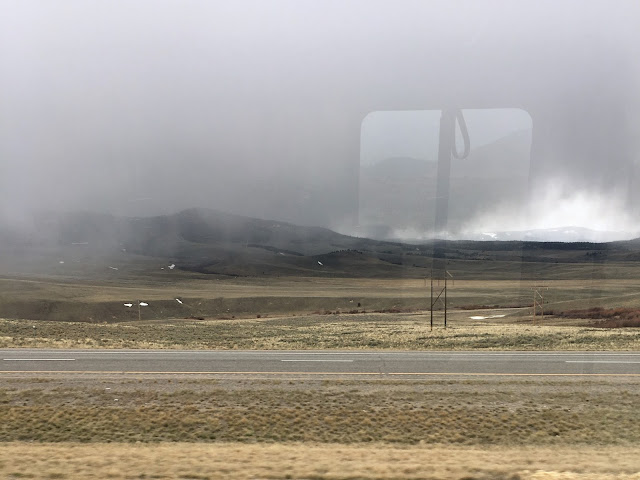 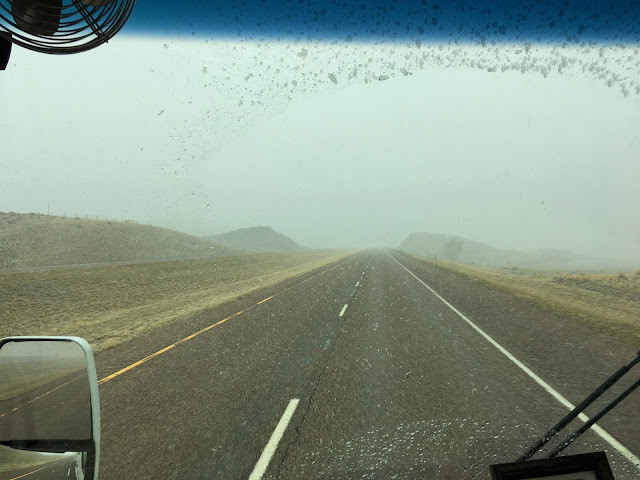 Further up the road we saw evidence of the snow that went through here yesterday but we were not too worried because we had left this snow in the dust behind us. 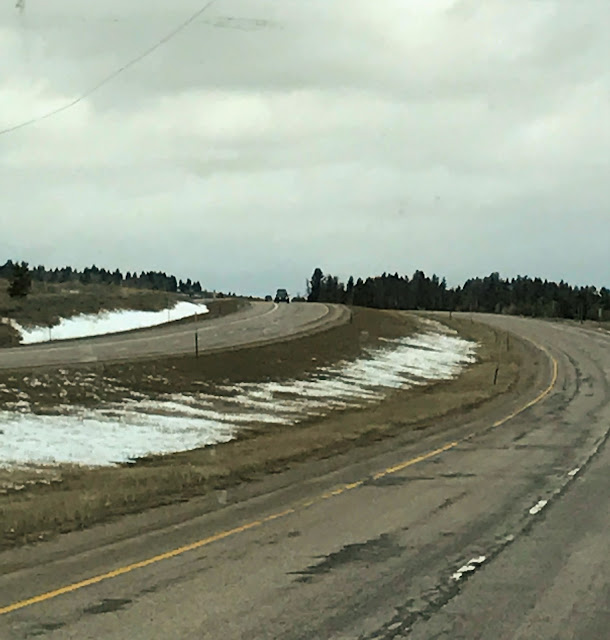 We are definitely in cowboy country and spotted the Stockyard Inn out in the middle of the prairie.  It looks like it is still an active saloon and the building beside it looks like it could be the jail.  Makes you wonder how many movies were made here.

Further down the road was what looked like an old abandoned school house from yesteryear. I almost bet that Butch Cassidy and the Sundance Kid went to school here at one time. 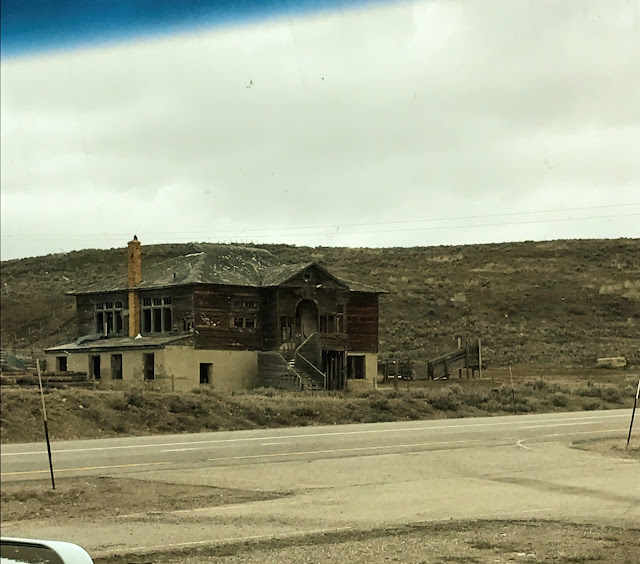 We headed down a tight canyon to where we were going to camp.  They had to cut a pass in the rock for us to get through.  It sort of looks like they just folded the mountain open. 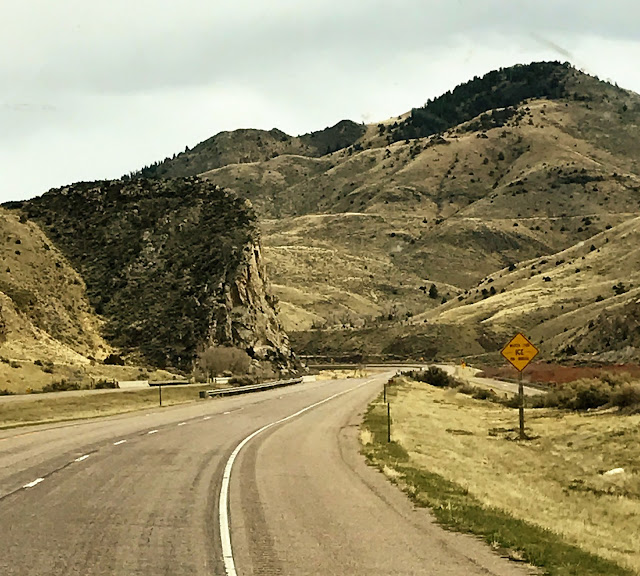 Sue has outdone herself again and found us a little hideaway near the highway, but far enough off along a winding road that no one else knows its here.  There was one bridge that made me look twice.  It looks like a 15 ton bridge to me, what do you think Harold?? 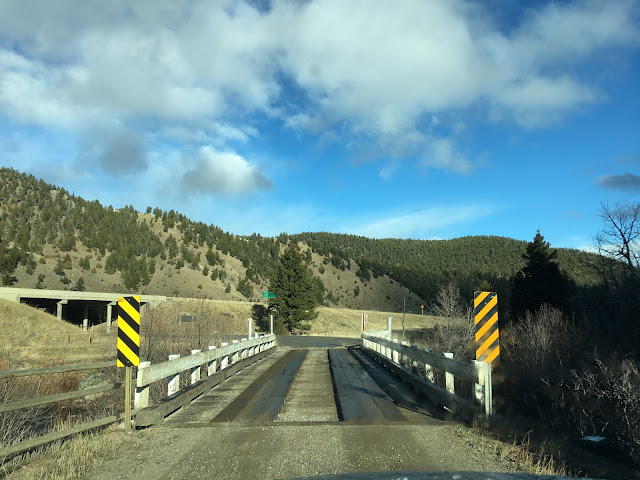 It’s a little piece of BLM land with a 14 day limit called Galena Gulch Recreation Area.  Wish it was warm and we might have stayed for a while.  It was 4C when we got here and going down to -5C tonight.  Brrrr. 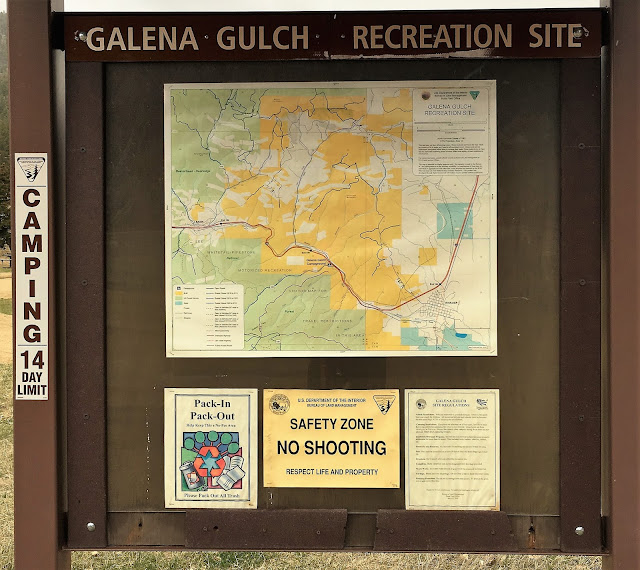 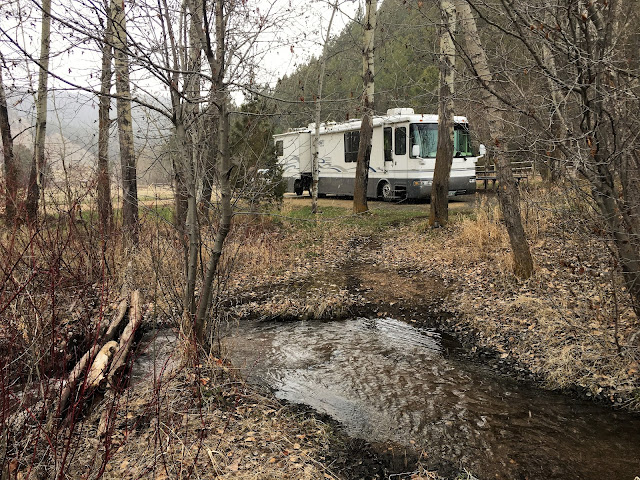 Charlie immediately bailed out of the Ponderosa and with his nose in the air, found a great big elk bone in the bush right near us.  I think people use this area to skin their hunting trophys and leave the legs etc. behind.  Lucky find for Charlie. After we got settled in we went for a drive to Basin which is about 3 miles up the road.  It is a little forgotten town that wants to be but never will be and as soon as we got into town a 4 x 4 truck followed us till we left.  He may have had a chainsaw, I’m not sure but I do know his girlfriend hasn’t seen water or a dentist in a long time. (no picture for obvious reasons).   I think we were the only two vehicles moving in town. 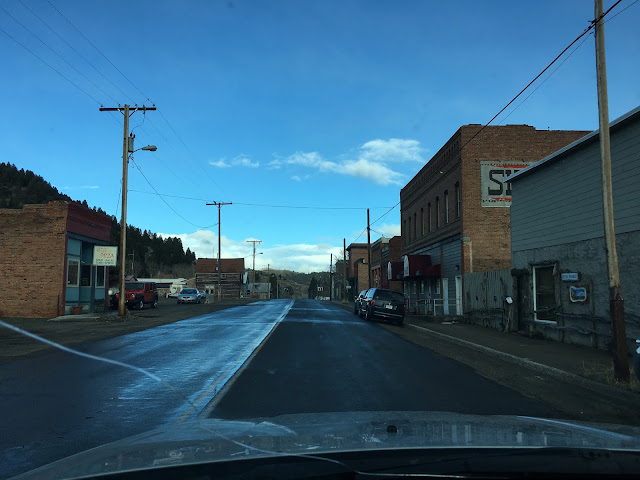 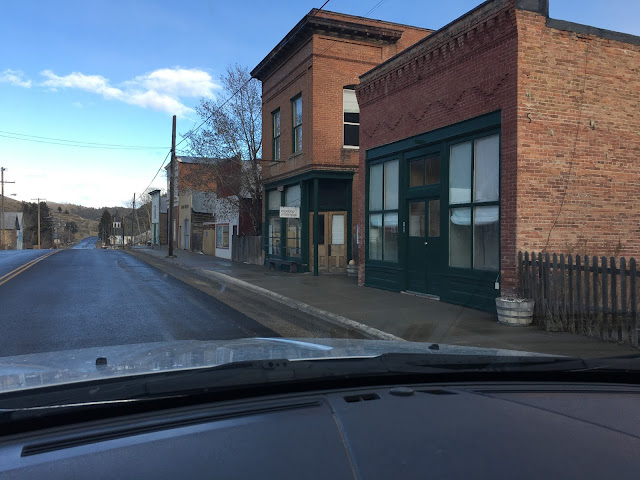 There was an old 4 room school that was obviously still in use and it was kept up quite well.  I didn’t think there were any of these still in operation today.   There was someone there and I should have stopped to see if I could look around.  But I didn’t!!!! 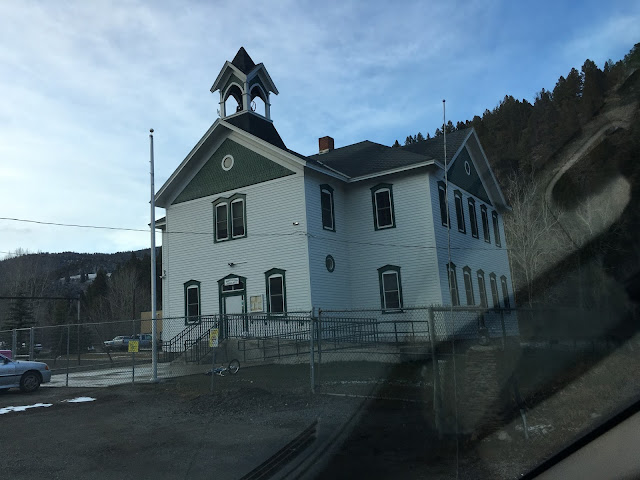 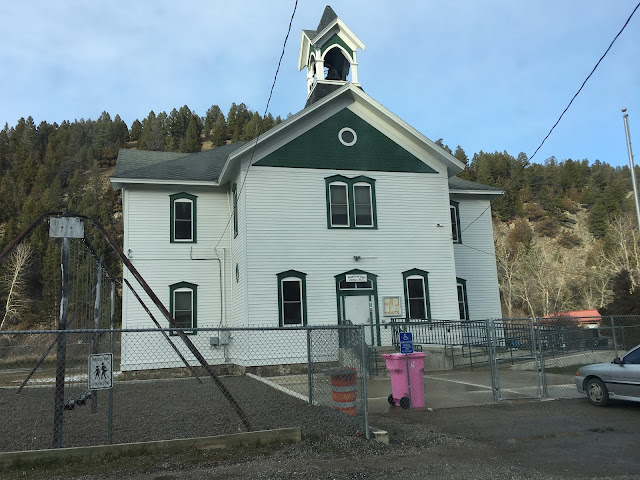 After a nice supper we settled in for the night with no internet or cell signal, just old fashioned movies and a book.
Tonight we are camped on the beach at Galena Gulch which is a few mile south of Boulder Montana at 46.25447N -112.18490W and this is the view looking from our window. 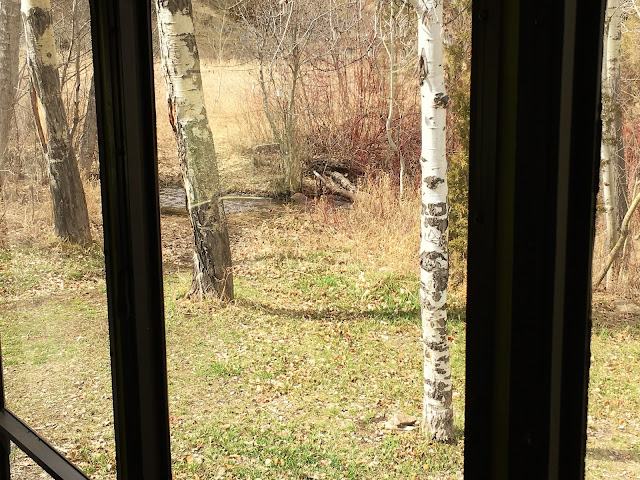 Posted by Lorne Green (A Place Called Away) at 23:18:00
Email ThisBlogThis!Share to TwitterShare to FacebookShare to Pinterest