WHERE ARE WE? Strang Nebraska
When I woke up this morning, I could feel the MH moving around from the wind.  We don't put stabilizers down on our overnight stays and with air still in the airbags, the MH likes to rock and roll.  Wind is not usually a good thing but, in this case, it was almost straight out of the north and we are heading south.  That will work.  There was a light skiff of snow on the ground when I took Archie for a morning walk, but the wind made the cold drive right in your skin.  It's still winter here!!!  We spent overnight in a truck stop and it was full when we went to bed.  By morning there were only a couple trucks left.  Today the high on our trip will be -3C. 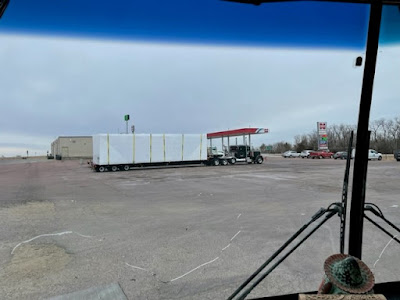 We headed south and when we got a couple miles down the road there was some evidence of ice that had formed overnight from blowing snow. 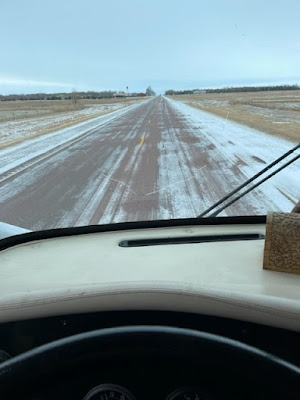 Further down the road we met a snowplow truck, and I began to think that this did not look good.  I was right.  The road turned from patchy ice to almost solid snow covered.  It was was not the really slippery ice but rather a snowpack, and we soon caught up to a plow truck.  He was dropping a little salt every now and again which would get the snow melting later, but for the first 400 kms, we had mainly snow and ice with a sort of track down the middle.  We just putted along and were quite fine.  If we don't know how to drive on this stuff, we should move out of Canada!!! 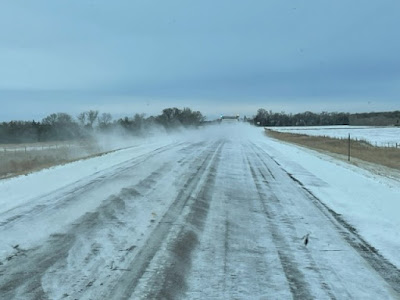 The hill down to the Fort Randall Dam was quite slippery and we had to use the lower road to cross the dam because of the winds up top. 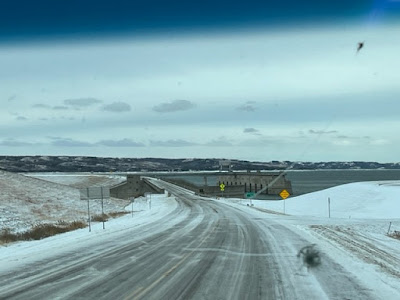 We noticed some semi's that are used to carry very heavy loads parked on the side of the road for the day.  I don't know how many tires were on the trailers, but it was lots.  Not a good day to carry multimillion dollar loads, I guess. 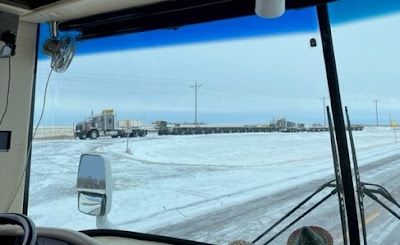 Archie is getting back into the travel routine and sits quite nicely on his mat on the dash.  He does like to bark at the odd cow along the way but all in all he is a good traveler. 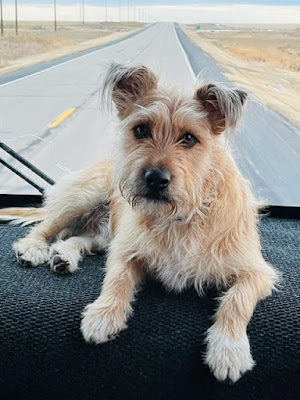 Nebraska sunsets are not all that spectacular with all the cloud cover.  We are looking for a low of -12C tonight so will have to run lots of heat.  Hope we don't freeze in our beds.  lol.  Goodnight!! 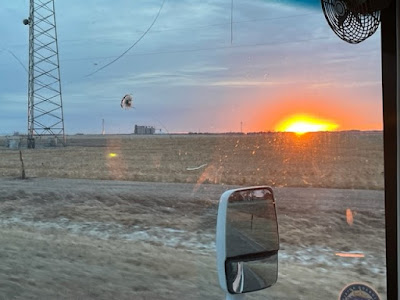 Posted by Lorne Green (A Place Called Away) at 18:45:00
Email ThisBlogThis!Share to TwitterShare to FacebookShare to Pinterest