Beautiful Lake in the Mountains

I have been having a terrible time getting internet that is strong enough to do a post so I am sadly behind. If you are interested I am posting the last 4 days today.  We have had some interesting travels and it may be worth the read.

We are trying to watch the weather and be in the best spot possible for the ugly weather that is going to plague us for the next couple days.   Starting on Friday the winds will increase and the rain may start on Saturday.  Now we are not against driving in the rain but as we go farther north there is a possibility it will turn to snow and I hate snow.  So we will head up to around Salt Lake City and see what happens from there. 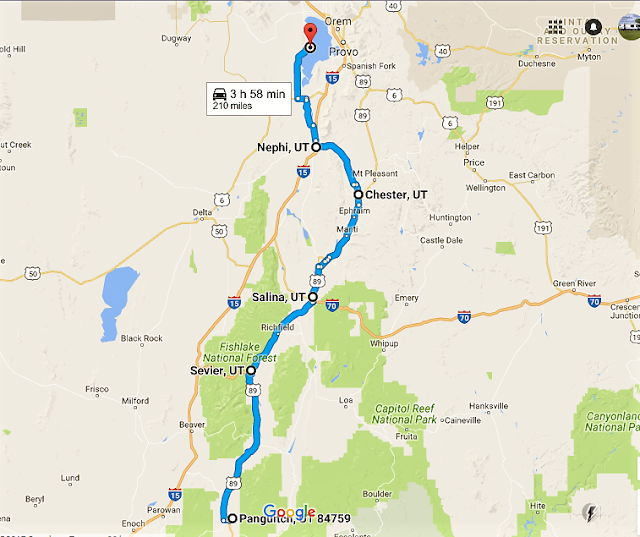 As we head north the landscape changes again to one of less desert and more sage brush and pine.  We are still following the mountains along and go up and down through some passes.  Our route kept us at between 4 and 7 thousand feet all day. 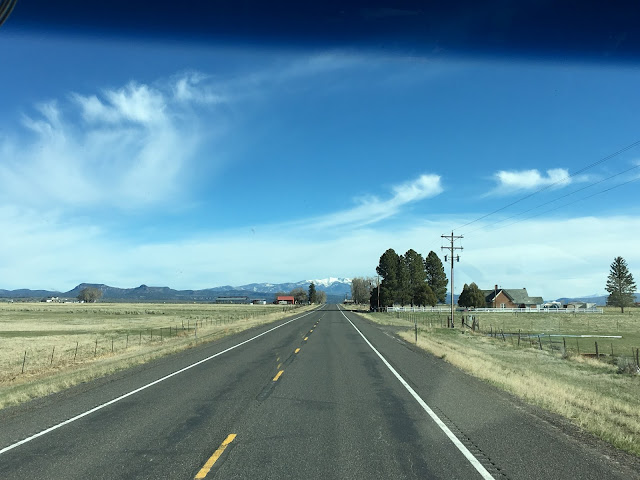 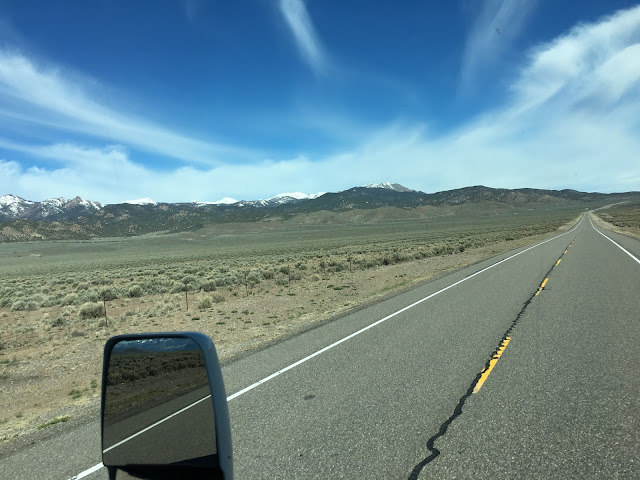 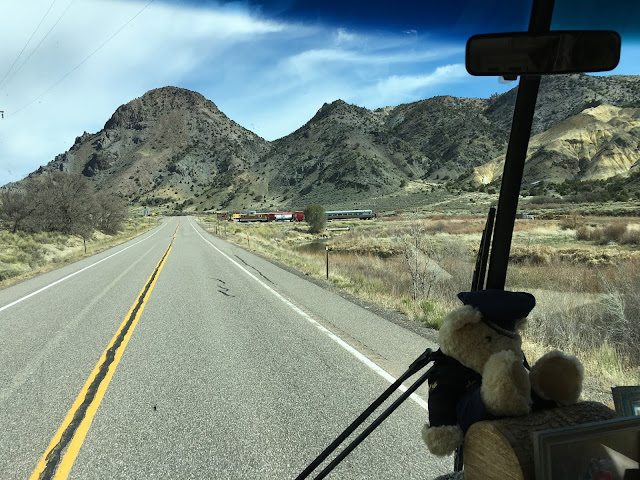 We came across a development out in the middle of nowhere that involved old train cars.  We didn’t stop but the sign said it was going to be a restaurant and motel I think.  Back in home in Rivers there has been a movement to make a motel from passenger train cars for quite some time. 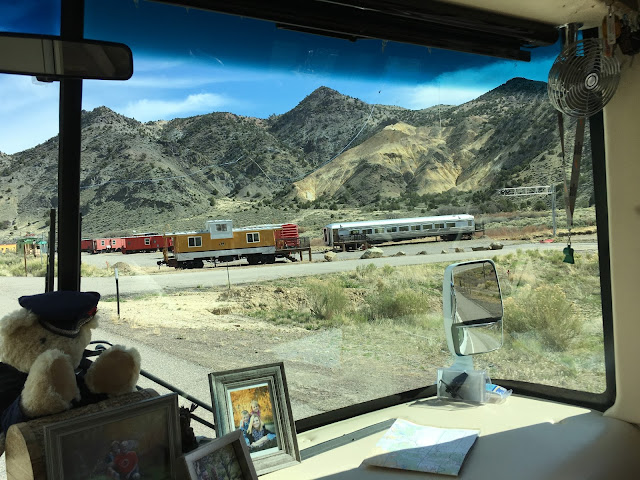 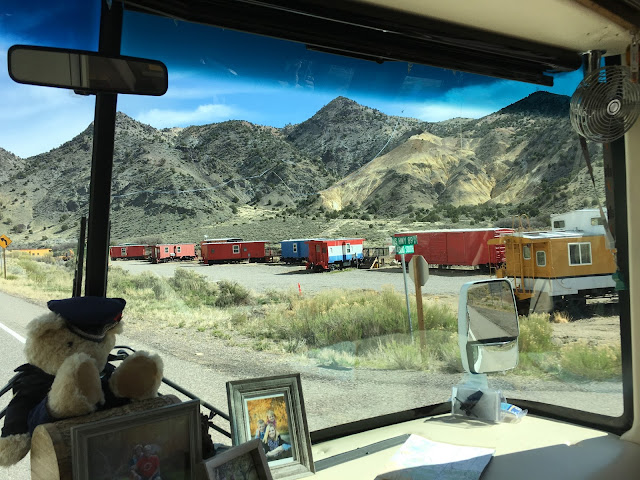 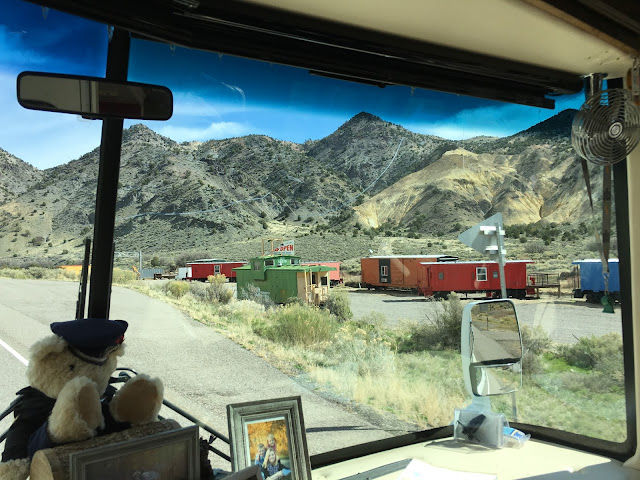 We followed highway 89 again today and stayed away from that freeway traffic on I-15.  We were on it for a bit and the speed limit sign said 80 mph.  Further down the road there was a state trooper sitting with his radar.   I can hardly believe that anyone would find the need to go over 80 mph.  So that is why we are on the slow scenic highway as much as possible. 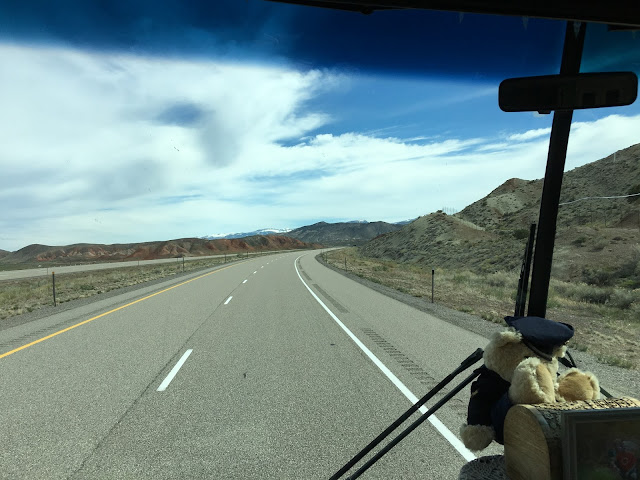 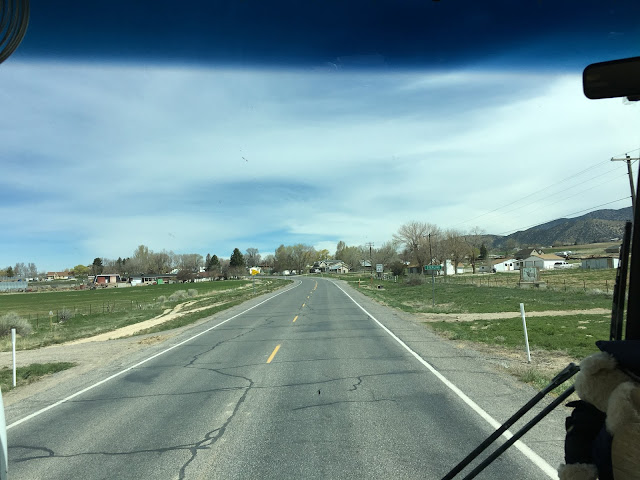 We do have to slow down for a lot of little towns along the way but that is part of the trip.  Some have nice downtowns and some have pretty churches. 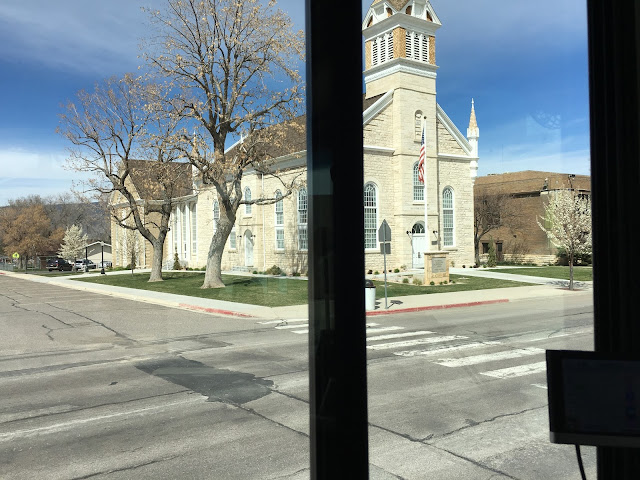 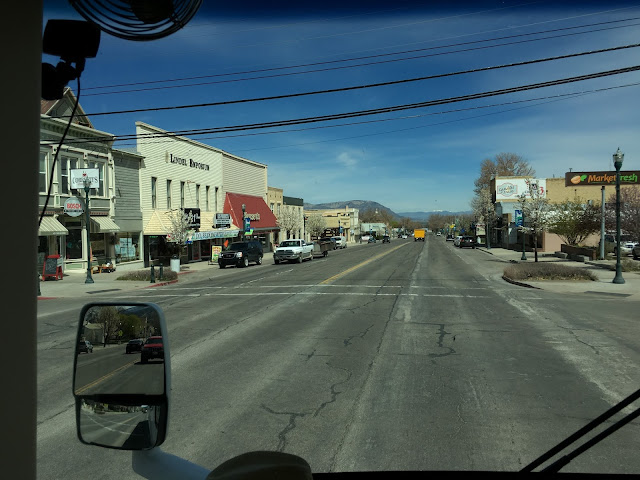 We went through one town where there was a huge tabernacle built on a hill outside of town.  I think it was like a seminary where Mormon ministers go to train but not sure.  I think it was in the town of Manti UT. 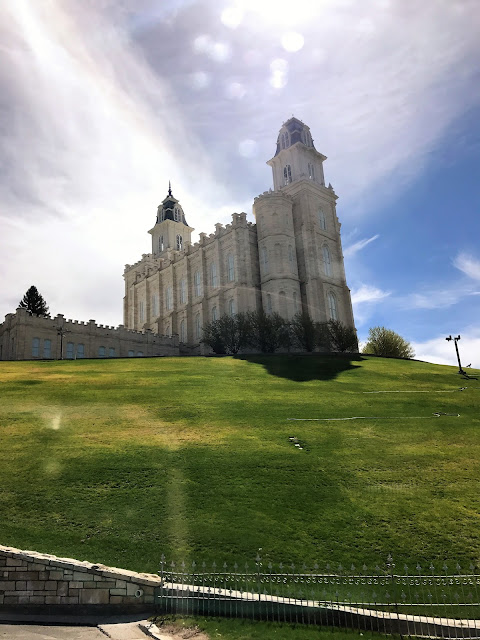 The countryside in the rural areas is gorgeous with the snow capped mountains in the background. 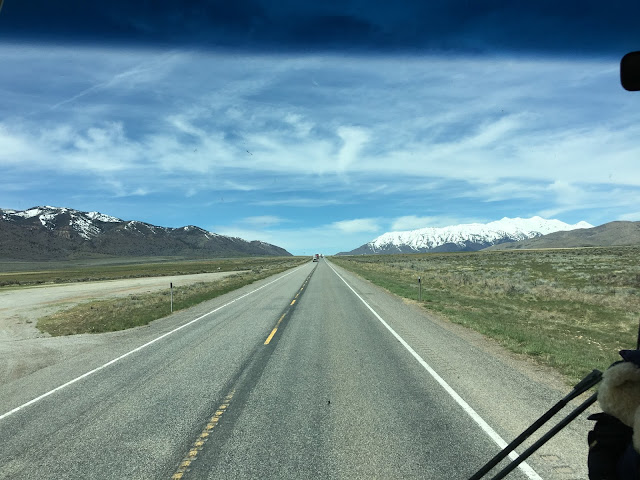 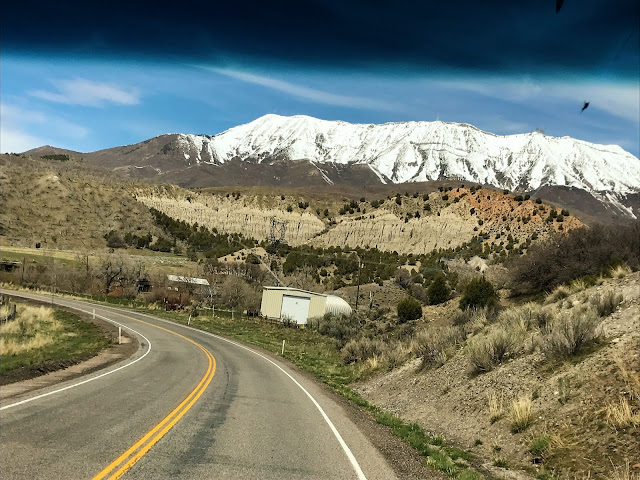 The temperature down where we were traveling was a balmy 26C.  Thats in the 80's F I think. 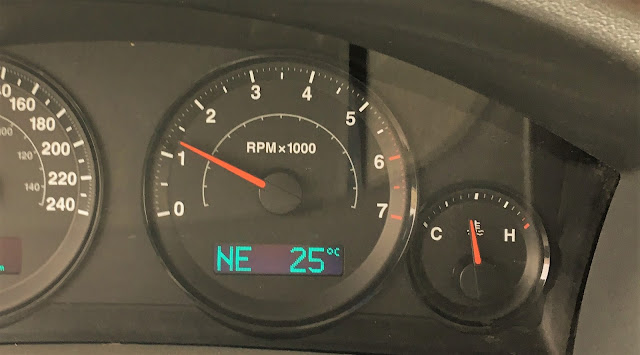 As we got closer to our parking spot the country got more rugged and the highway got narrower.  It turned into an interesting drive through a mountain pass with an average speed of 25 mph and down to 10 sometimes. 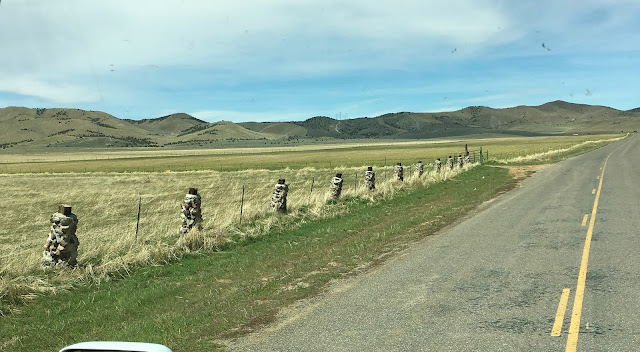 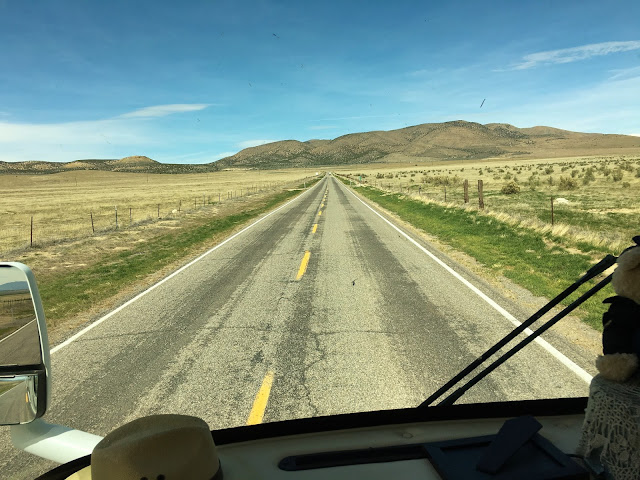 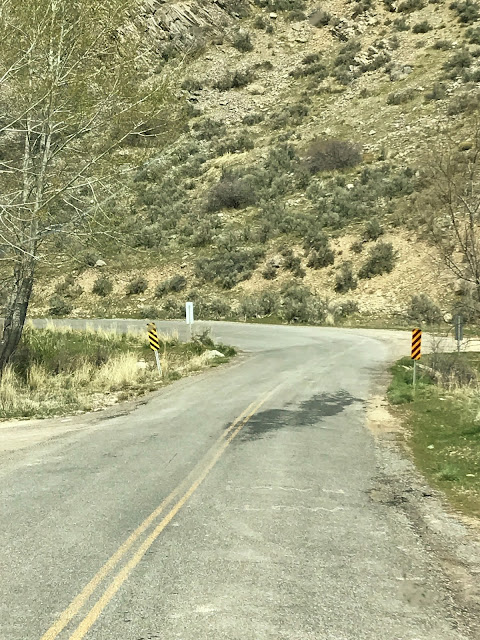 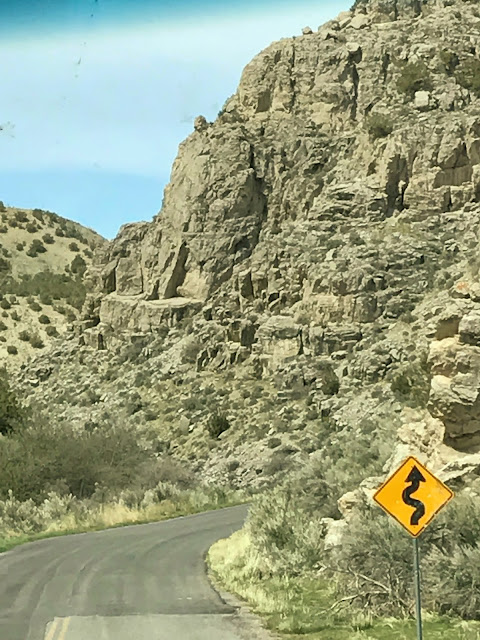 We got to our spot in time to spend some time relaxing outside and enjoying the beautiful scenery by the lake.  There is only one other person camped in this whole area so it is quite peaceful. 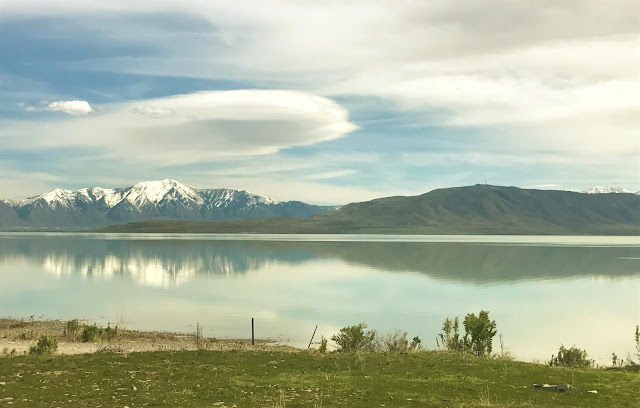 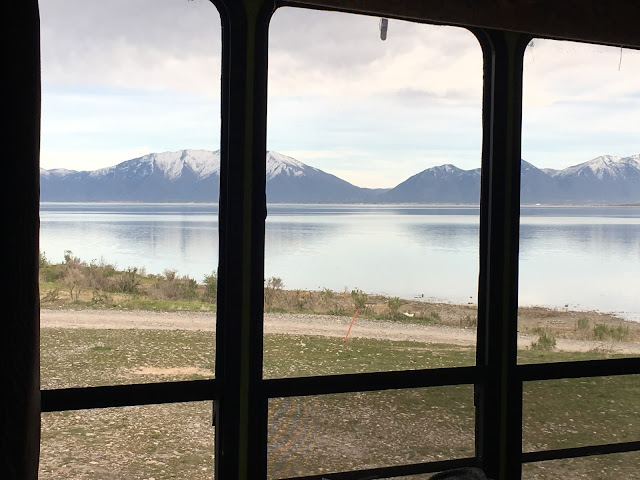 Posted by Lorne Green (A Place Called Away) at 12:08:00
Email ThisBlogThis!Share to TwitterShare to FacebookShare to Pinterest