We knew today was supposed to be rainy so we didn't get in a big hurry to do anything.  Life on the beach looked a little wet this morning. 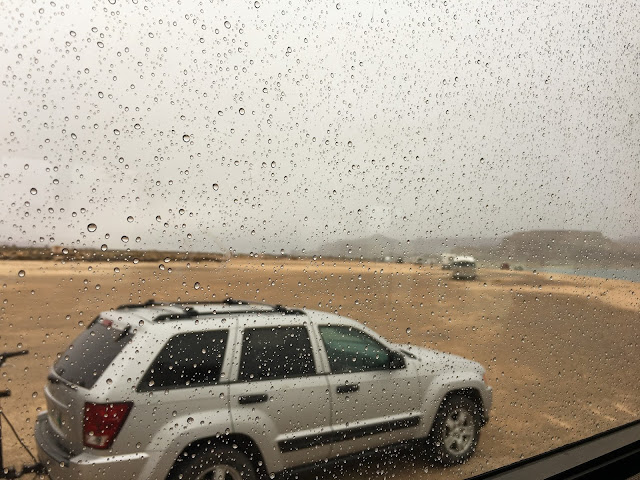 We headed to Big Water to pick up Kyra and then on to do some exploring.....indoors.  The first stop was the Grand Staircase Escalante - National Monument. 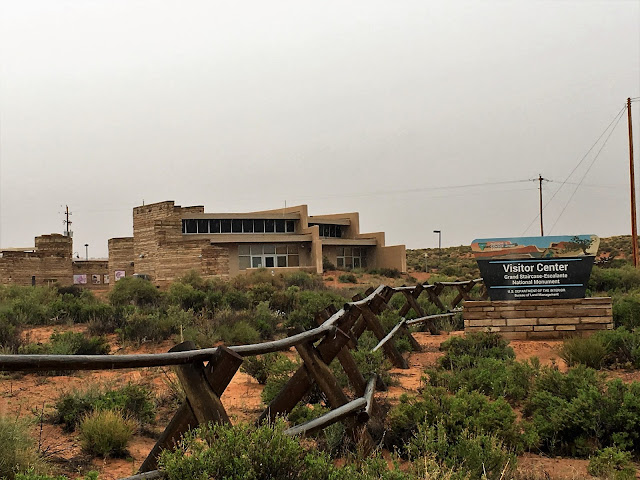 When we went inside there was a gentleman giving a bit of an orientation speech to a couple from Ontario.  He seemed to know a lot about the area and as he continued his talk got more in depth.  Now I have never been a fan of dinosaurs, not that I don't believe that they existed, but rather because they were so long ago.  This gentleman got my attention with his rendition of what had happened way back then.  We did learn that all birds are actually dinosaurs, and have not changed a whole lot over the years.  Hmmm interesting.  He also told us that this area is the current hot bed for dinosaur discoveries with about 4000 a year being unearthed. 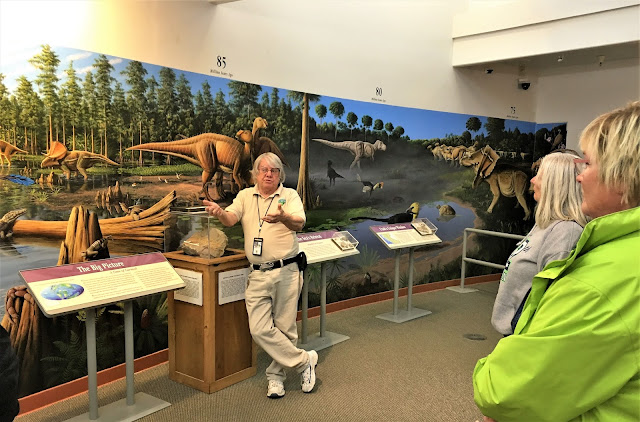 Then he shocked us with a revelation.  Apparently he had been roaming in the desert around here and came across a bone sticking out of a rock.  After a bit of checking it was discovered that this bone belonged to an ancient dinosaur which had never been seen yet.  This dinosaur showed that it had feathers.  Up to now everyone just assumed that dinosaurs were thick skinned like an elephant with little or no hair.  Now they are not so sure this was true of all dinosaurs.  So to make a long story short this guy had a dinosaur species named after him and he is pretty proud of that.  What a great story to be able to tell people who visit there. 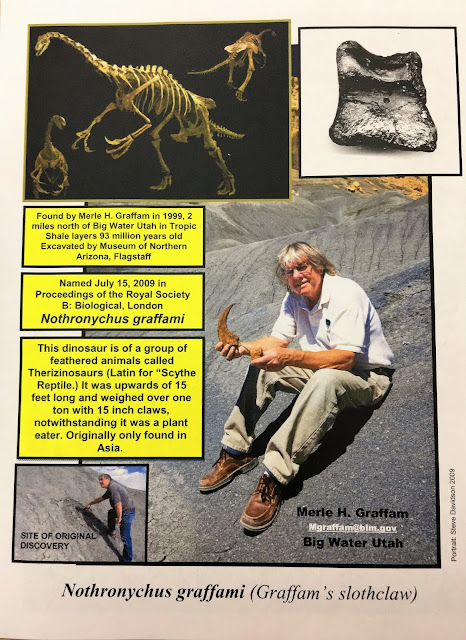 Mr. Graffam was kind enough to pose for a picture holding a likeness of the dinosaur he found. 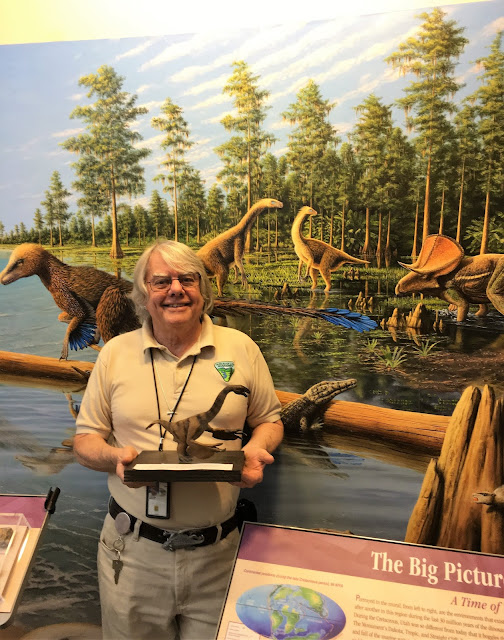 The pictures  are an artists rendition of what they might have looked like except no one knows for sure that the tail feathers were coloured blue.  That part just makes them look pretty. 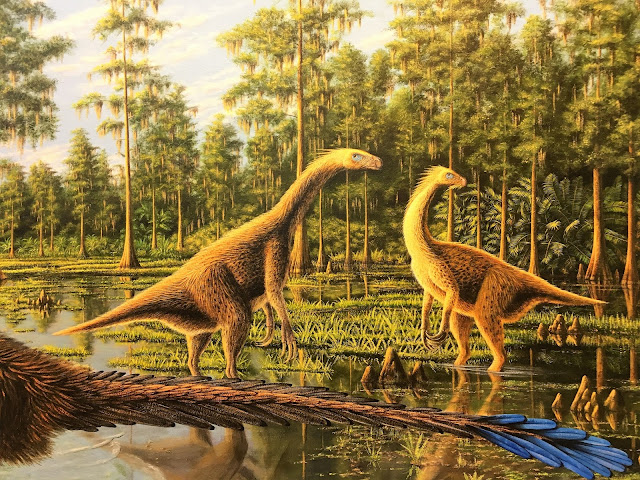 We got a few pictures of copies of some skulls that have been found in the Glen Canyon.  That is a a well known dinosaurs wife in the picture. 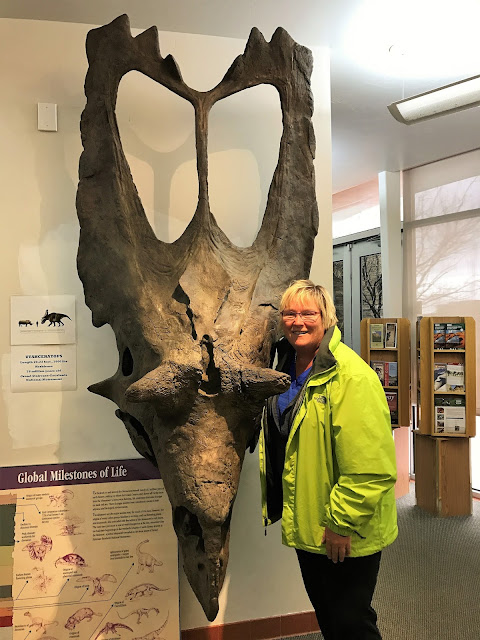 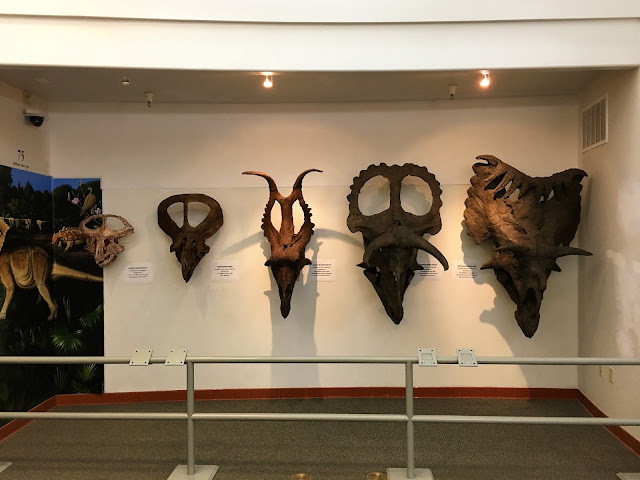 Then we headed into Page to check out the big hydroelectric dam there.  The girls were not interested in doing the tour down to the generating station for $5.00 so I didn't go, but I imagine it is similar to Hoover Dam which I have seen. 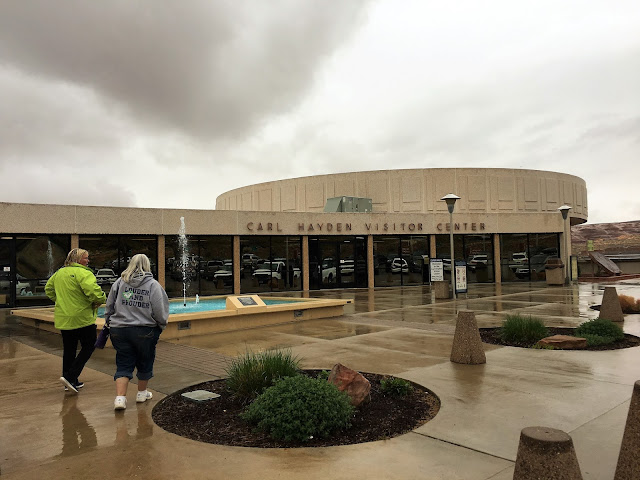 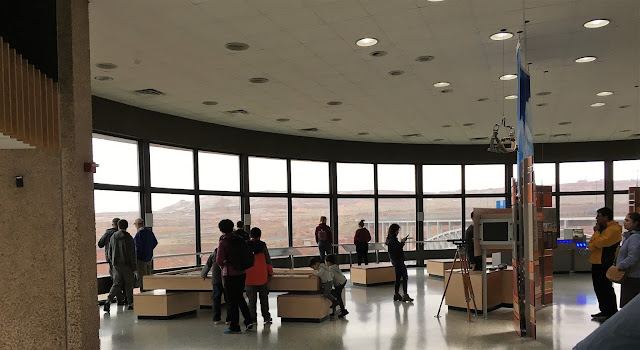 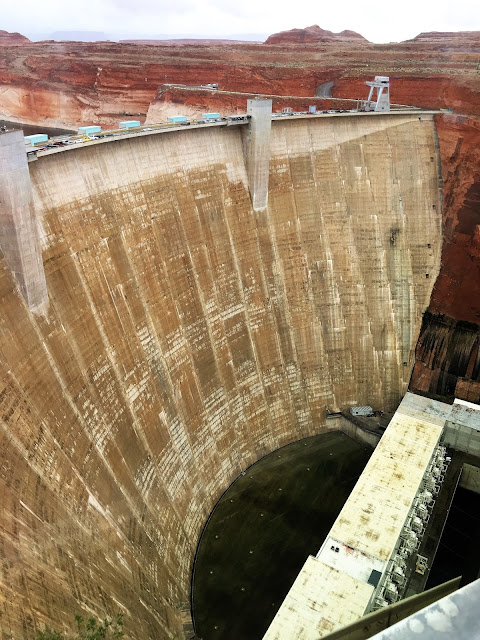 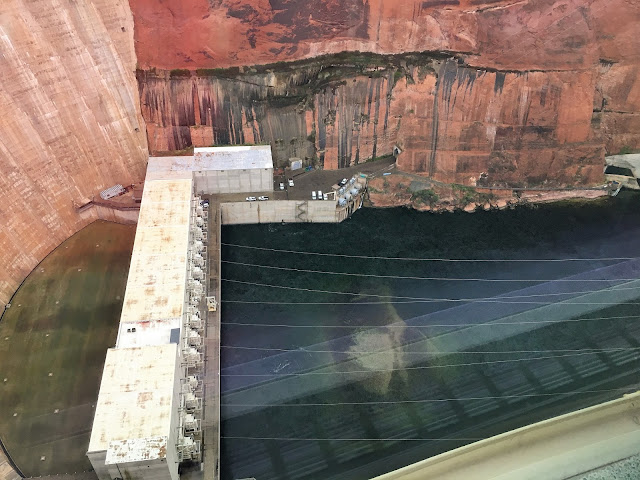 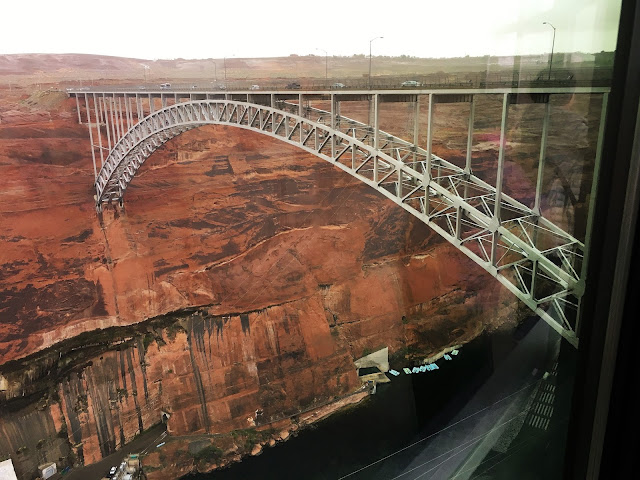 Had to take a quick shot of a nice old Mustang Shelby that was parked outside in the parking lot.  They don't make them like that any more. 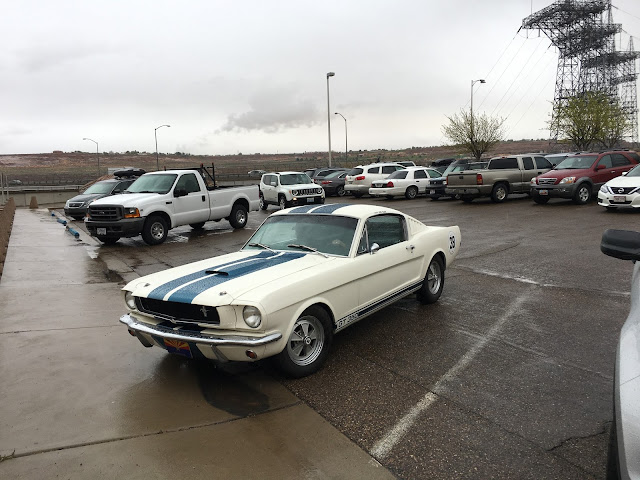 We figured out that the kids around here could sure have fun with a little blue paint to fix the sign on this Glen Canyon Dam security truck.  Heck I was even tempted to go find some blue painters tape. 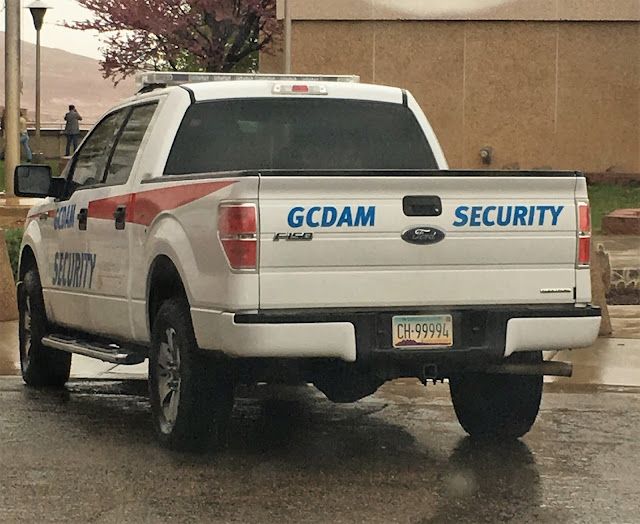 We took a little drive out behind the dam and saw some neat rock formations along with some nice white flowers that were enjoying the rain. 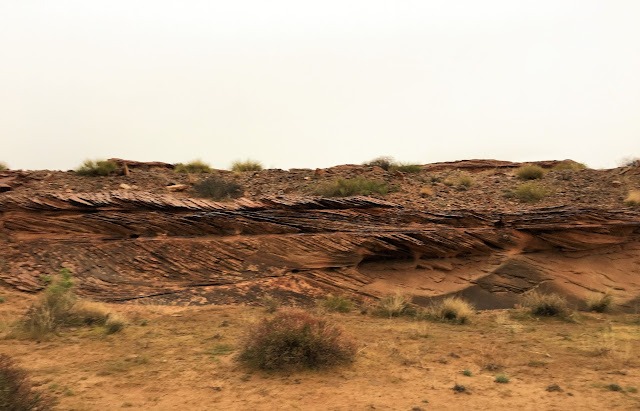 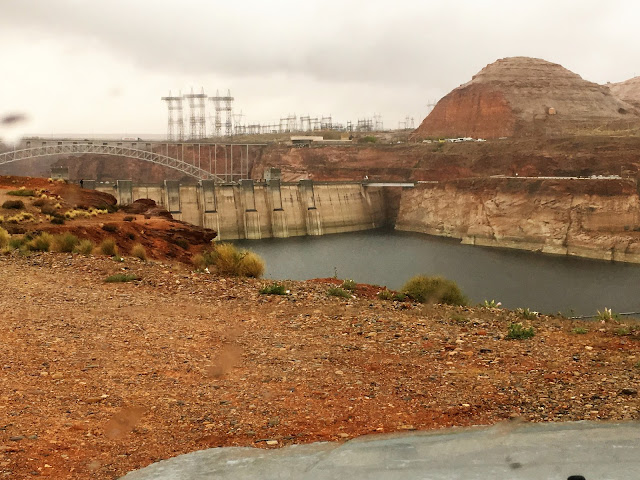 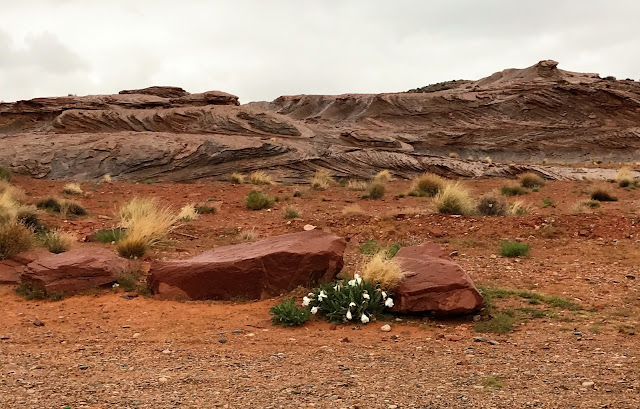 We arrived back at the lake before supper and things had not changed a whole lot.  The sun is supposed to shine tomorrow so that will make it better. 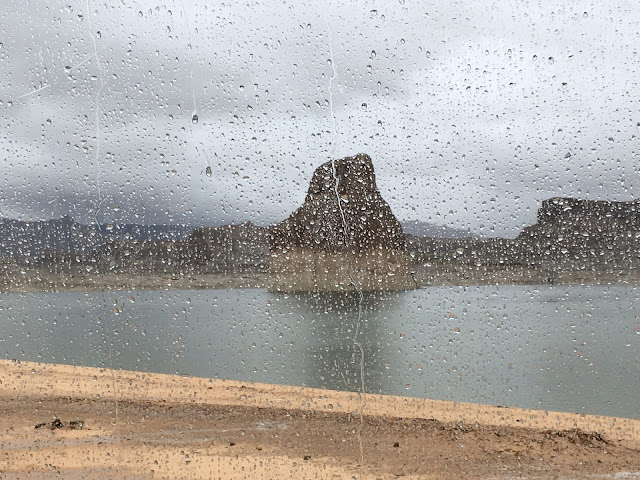 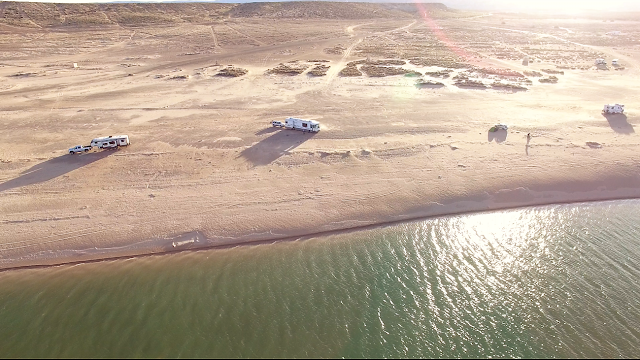 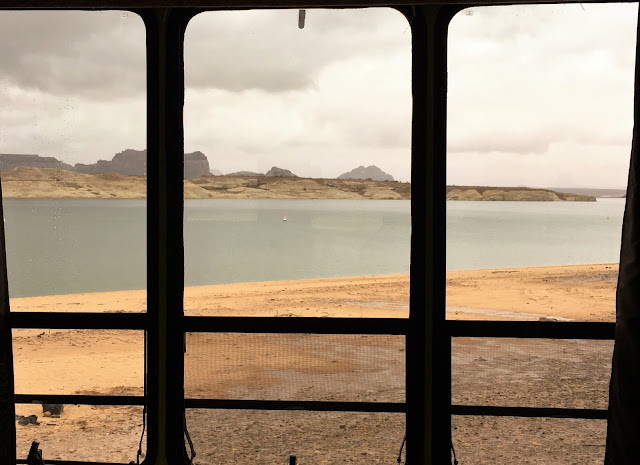 Posted by Lorne Green (A Place Called Away) at 20:51:00
Email ThisBlogThis!Share to TwitterShare to FacebookShare to Pinterest