A Gunfight in the Desert

We awoke again today to the sound of the Sandhill Cranes heading out to feed.  They sure make a racket.  We are heading down the road again today with the intention of visiting the historic town of Tombstone AZ and then on to Casino Del Sol in Tucson AZ. 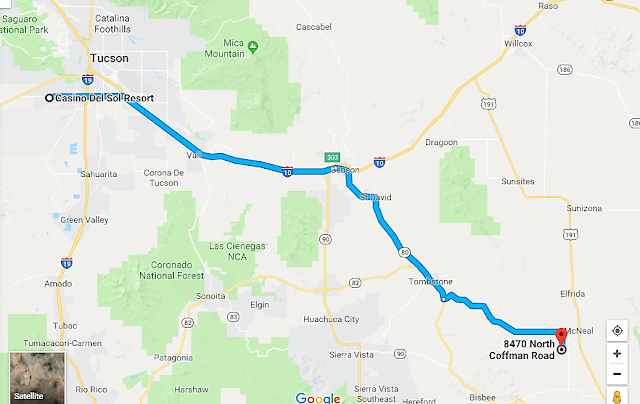 We decided not to take Highway #80, but rather to follow Davis Road to where it intersects with #80, just south of Tombstone.  It is a paved road with a few Cattle guards across the road but is in good shape and we just meandered along at about 45 mph.  It is really pretty ranch country the whole way. 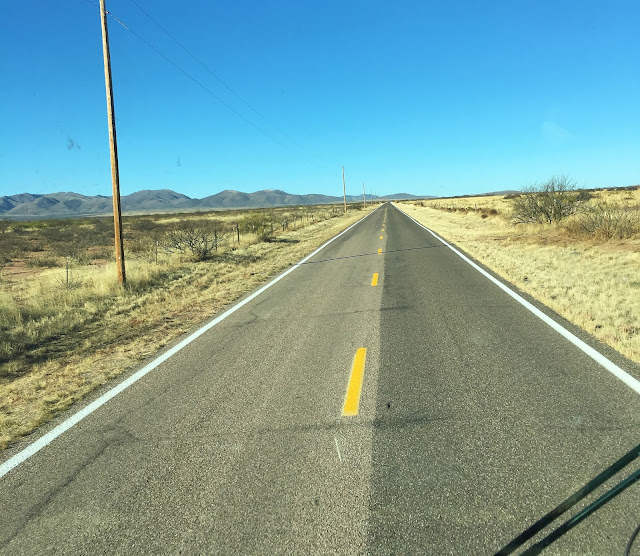 We only had about 35 miles to get to Tombstone.  It was a gorgeous sunny morning for a drive in the country.  We are starting to like these country roads.

Tombstone has a nice place to park the RV's down a steep little hill.  There were a few RV's there already which surprised me because it was only 10:30 in the morning. 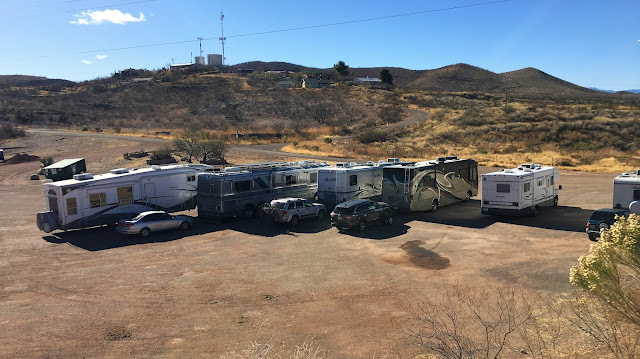 The main street in Tombstone was very quiet and there was a cool breeze blowing down the dusty street.  The sun was out so it didn't take long to warm up a bit. 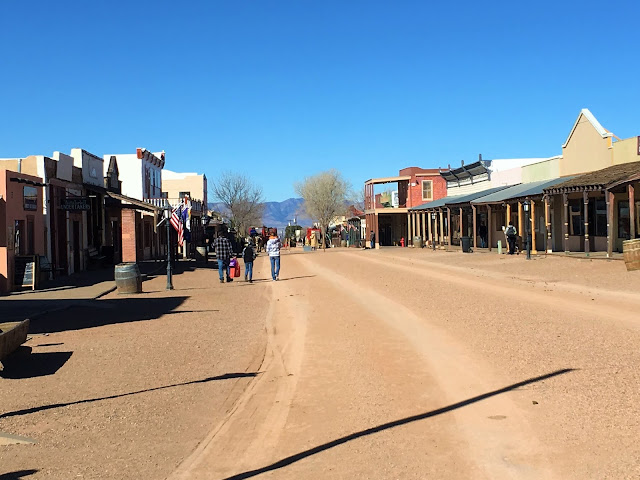 The first place I checked out was the Bird Cage Theater.  This is where Wyatt Earp and Doc Holliday played poker often.  Legend says that there was one game that lasted almost 8 and a half years and the buy in was 1200 bucks then which is like 30000 dollars now.  The players at the table changed often but the game never ended for over 8 years.  For $10 you could go in the back and see the poker table and all the history, but we decided that is for another time. 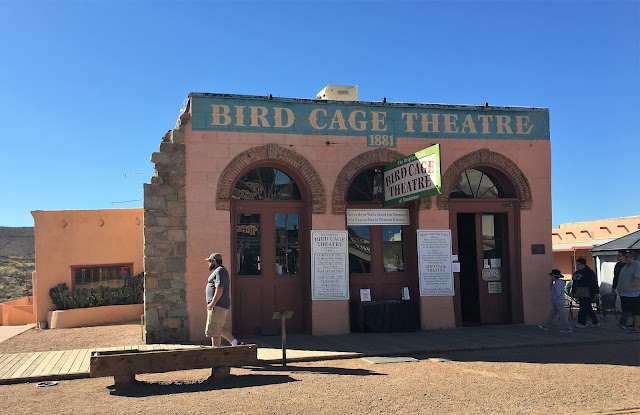 This was also a brothel and had rooms that they called cages which the call girls used.  Thus the name.   Lots of fights over the ladies erupted with lots of shots fired.  They claim there are over 120 bullet holes in various parts of the building.  One 45 cal bullet is lodged in the wooden leg of the bar. 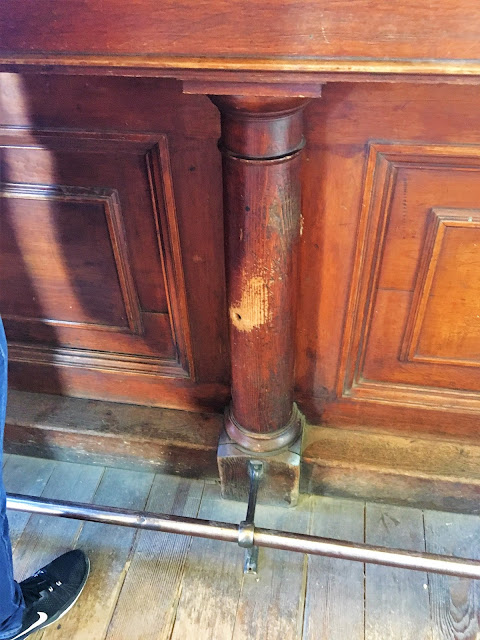 Farther down the street was a fun replica of a miners shack.  It is supposed to be a scale model of what they may have lived in.  The guy and his cat inside had been dead a long time because they were both skeletons. 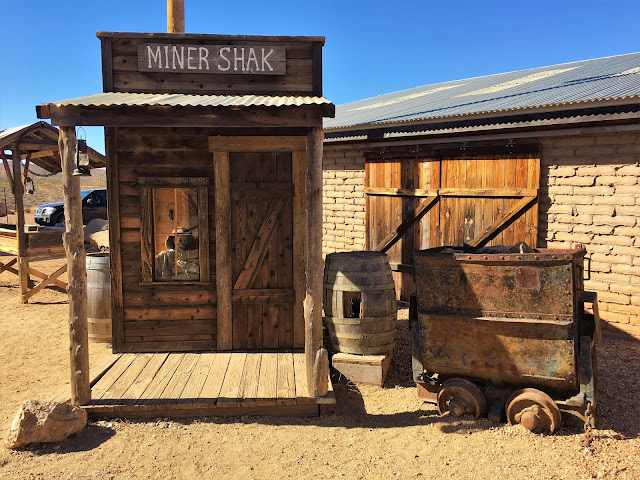 One of the signs in front of a brothel gave a bold warning to the customers from the big city.  There are probably a few building existing today that should have that sign on the front!! 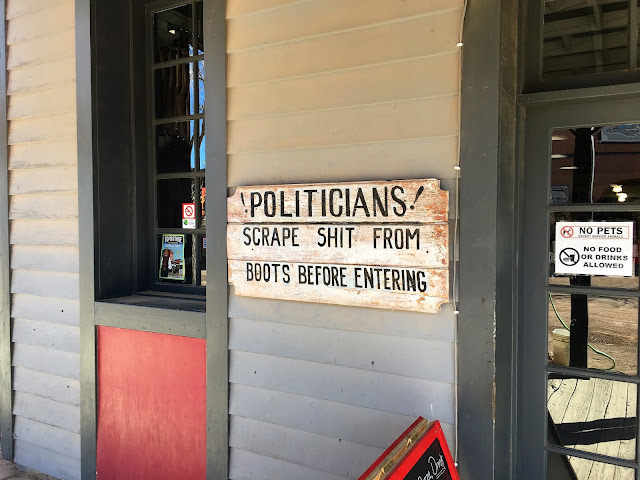 We decided to take in a comedy gun fight rather than the traditional gunfight at the OK Corral.  We will save that one for next trip.  The guys did a real good job of the fight and were quite entertaining.  The show lasted over a half hour.  Well worth the 15 bucks which included a trolley tour of Tombstone. 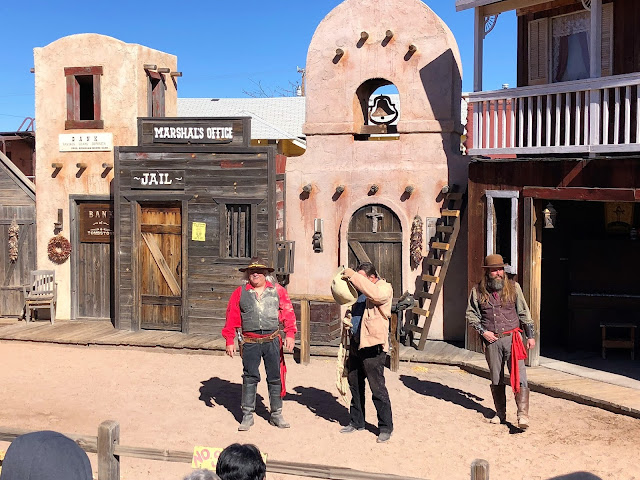 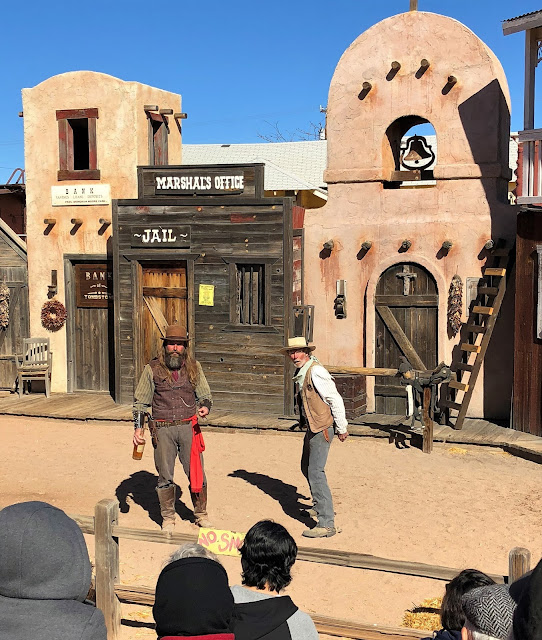 The trolley tour was very interesting and gave us an opportunity to see where some of the colourful characters of this town used to live. 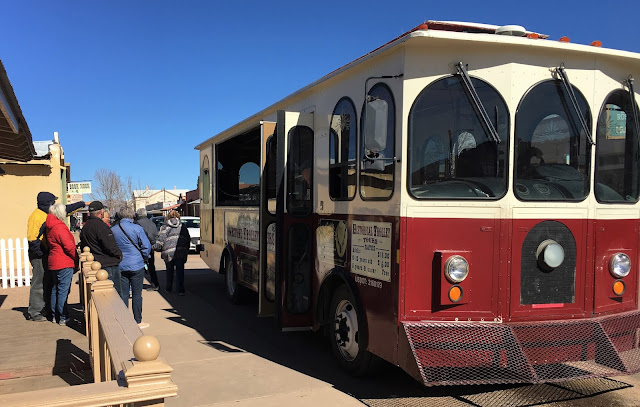 Our guide "Chuck" was a very good tour guide and loved to talk, which is a good thing if you are in that line of work.  He told a story of a guy by the name of Lester Moore who was killed in the town.  Ironically our friend Lessie's maiden name was Moore, which made her Lessie Moore, and she has a brother named Lester Moore.  Chuck was very interested in these facts and stayed after the tour to talk to us about that incident. 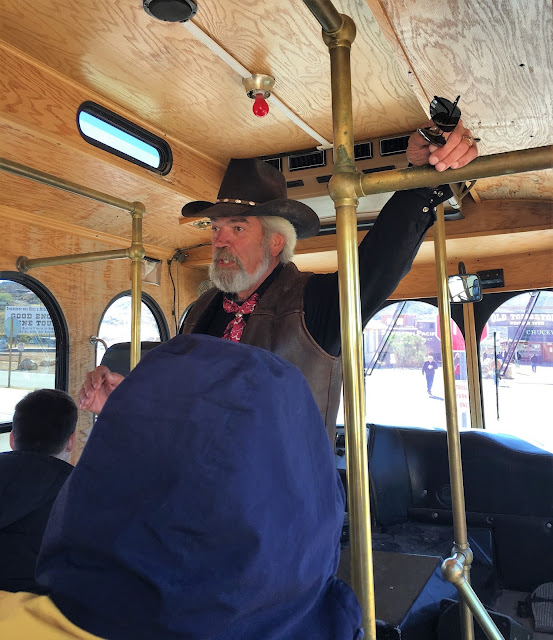 By they time the tour was over it was time to continue our road trip into Tucson to the Casino Del Sol.  They have a big parking lot out back which is held for RV's to park in.  By the time we arrived there were a lot of RV's already here. 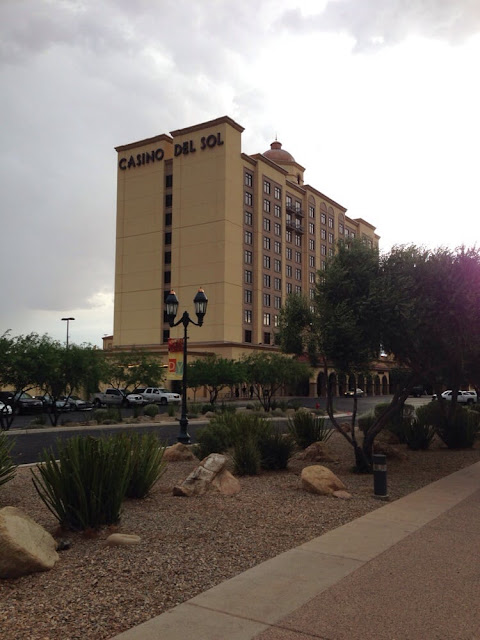 Rowdy and Missy met us in the parking lot and we went into the Casino for supper.  They have a great Mexican Restaurant where we had supper.  I didn't get a group picture but did get a picture of Rowdy and Missy.  Rowdy was in the midst of telling a story.  Sure great to see them again. 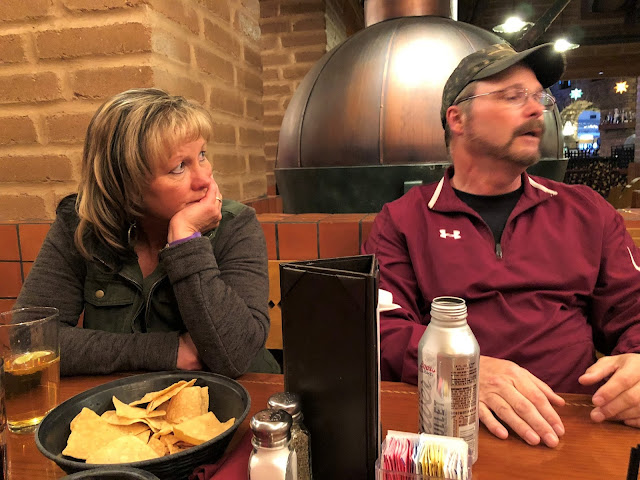 This casino is one that has the pretty sky for a roof.  It makes you think you are outside all the time. 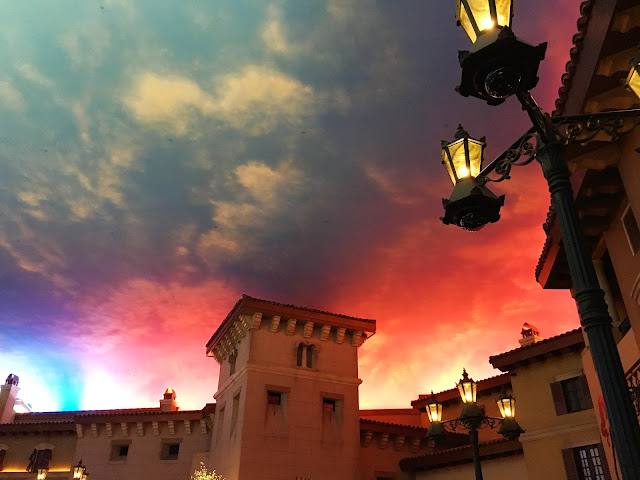 Winners of the night were Rowdy who after deducting what he put in the machines, netted $160.00.  Susan was in a close second with $140.00.  The rest of us had fun!!!!  Back to the Ponderosa we went where Lexi and Charlie were waiting patiently for us.  What good puppies. 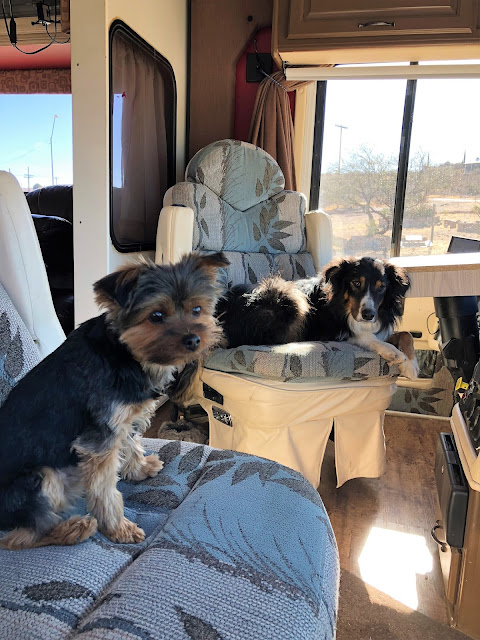 The view from our window tonight: 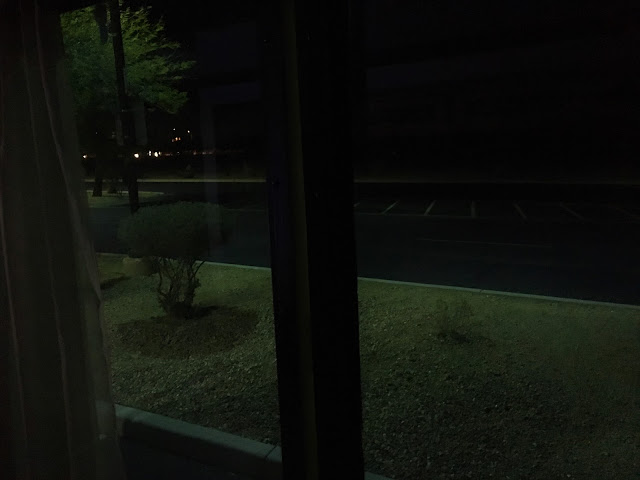 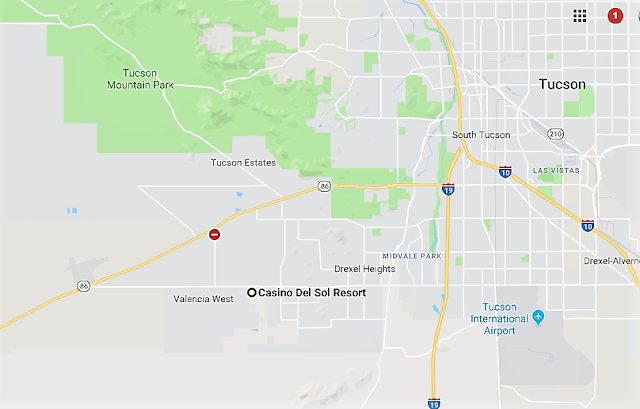 Posted by Lorne Green (A Place Called Away) at 22:25:00
Email ThisBlogThis!Share to TwitterShare to FacebookShare to Pinterest