We were on the road by 9 am this morning because we have not yet become accustomed to the time change to Mountain.  Our bodies still thought it was 10 am so no one was complaining.  First thing we did this morning while leaving was to get lost.  Bad timing on some lights spread us out and when you are depending on following the leader (us) and we get the green lights and everyone behind us gets yellow, you are not ready to start to navigate yourself, so by the time you try to get your bearings, you have blown by the turn you were supposed to make and find yourself in foreign territory without a plan.  As it turned out everyone ended up in the right place in the end and off we went on today's adventure. 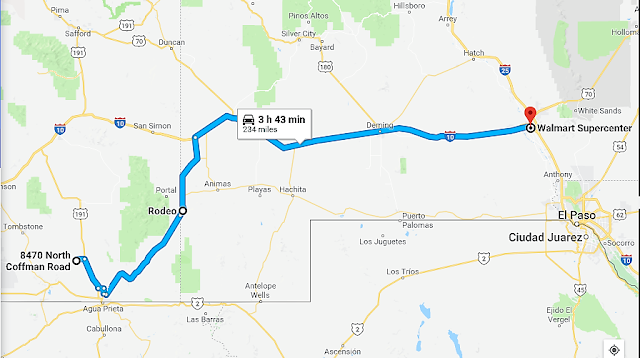 We followed I-10 to just outside Steins where we turned south on #80 highway which will take us down through Rodeo, Apache and on to Douglas, Bisbee, Tombstone, and back up to Tucson.  We have never been this way before but have read blogs from Al of The Bayfield Bunch and Doug of Miss Adventure Travels which made us want to explore this area.  If you want great pictures of this area, go to there blogs in late December and early January of this year.  They were both just in this part of the country.  The road through the mountains is spectacular, and we just diddled along at about 50 mph enjoying the scenery. 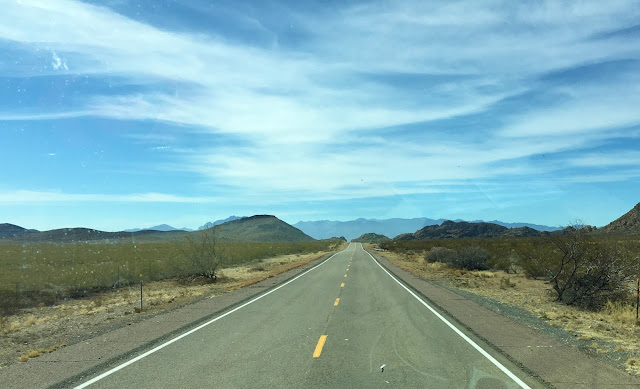 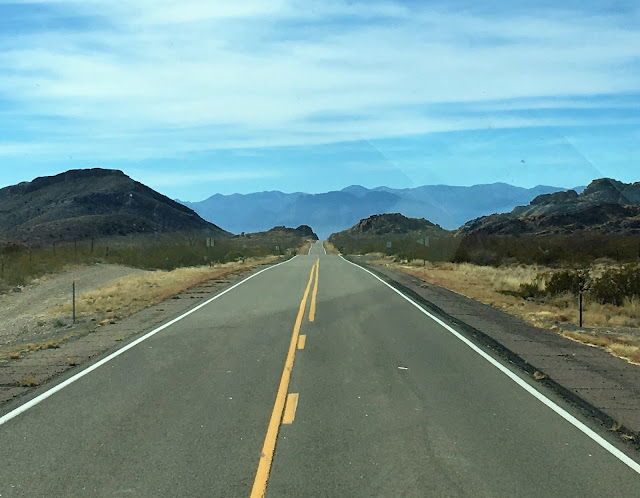 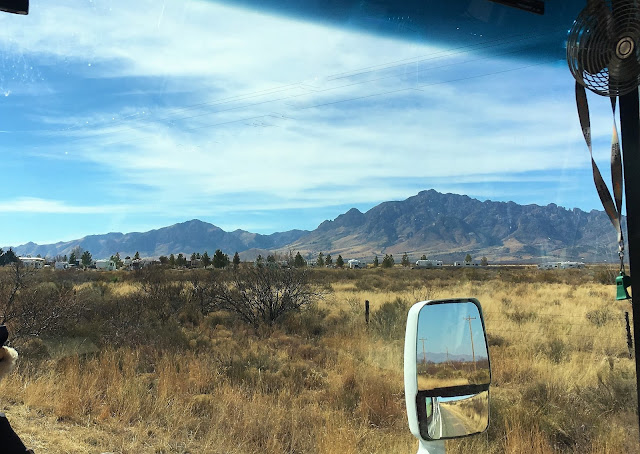 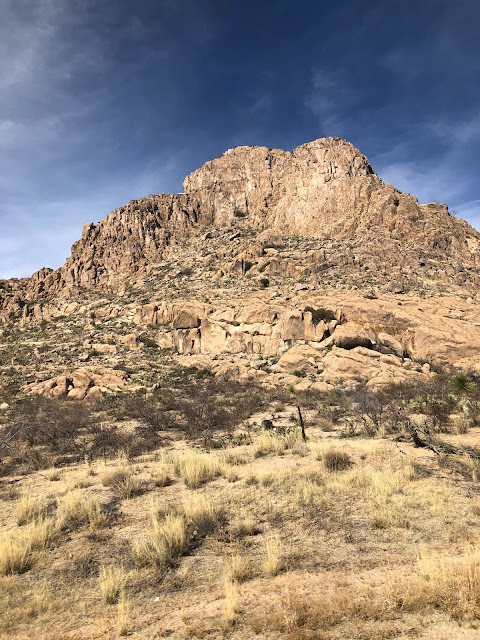 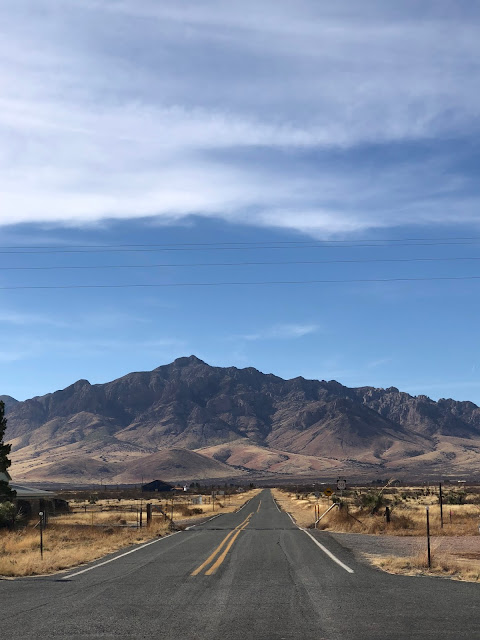 Down the road near Rodeo New Mexico, we saw a neat little museum by the side of the road.  It was called the Chiricahua Desert Museum and Apache Museum.  Inside the Apache museum is a small but interesting display mainly of Geronimo who used to hang out in these parts. 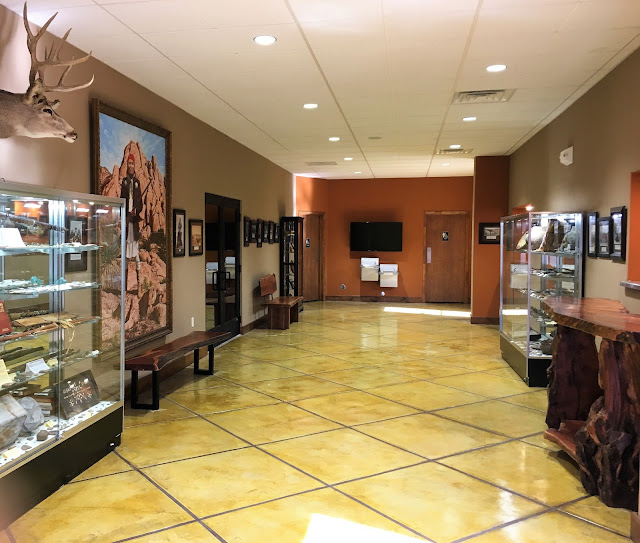 In the other building was a great display of desert creatures you might encounter in these parts.  There are many species of rattle snakes out here and just as many harmless snakes.  Susan was taking a picture of one of the rattlers and it decided it didn't like her and started rattling and hissing at her.  He really wanted to bite her bad.  Good thing there was glass there. 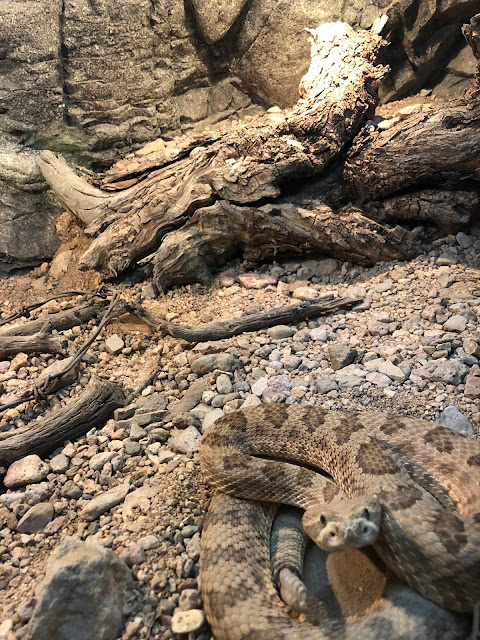 You can see that the rattler is moving lots because of the blur in the picture. 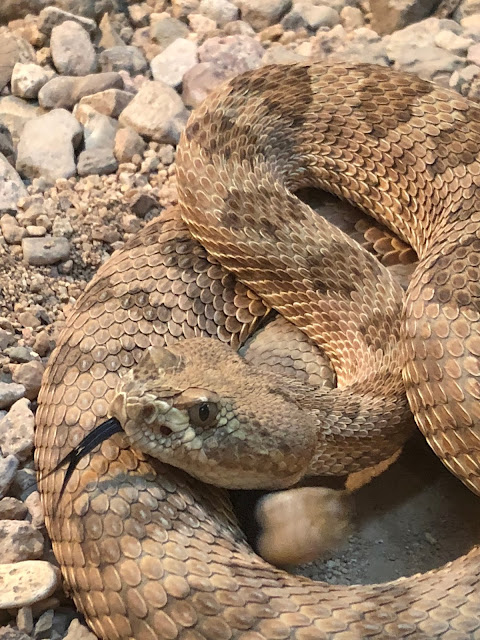 This is as close as Harold wants to come to a rattler!!! 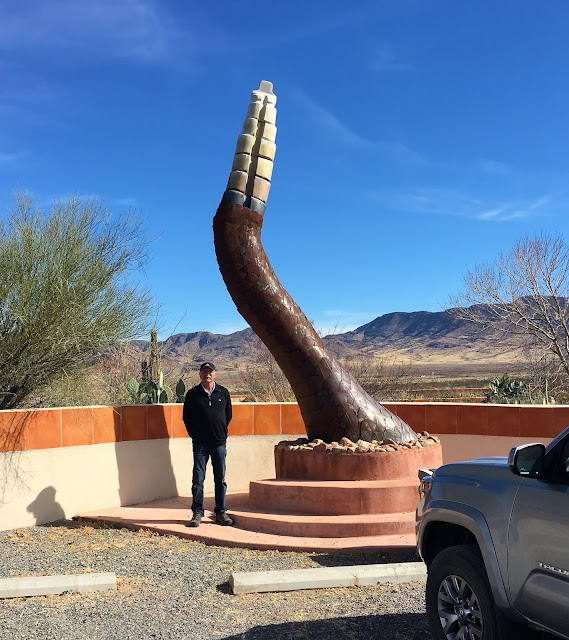 When we got out of the museum, the weather had really smartened up.  We must be getting close to Arizona by the way it feels. (Rodeo NM is 3 miles from AZ!). 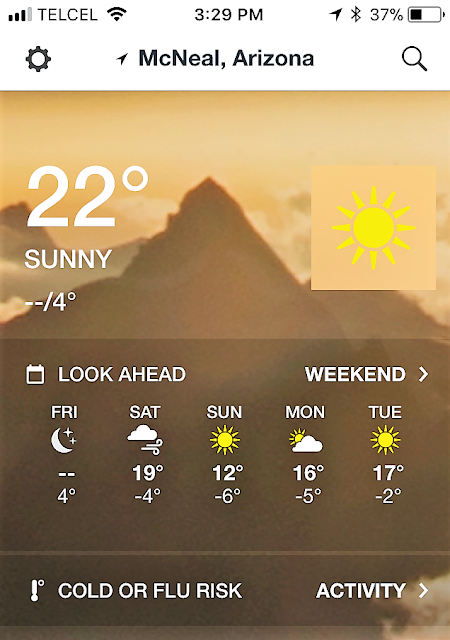 Sue has been working on a spot for us to hang our hats out here and she loves free.  She found us a spot that is called Whitewater Draw Wildlife Management area, that is famous for Sandhill Cranes who stop here on their migration.  There can be up to 30,000 cranes here at a time in January. We headed there for the night. 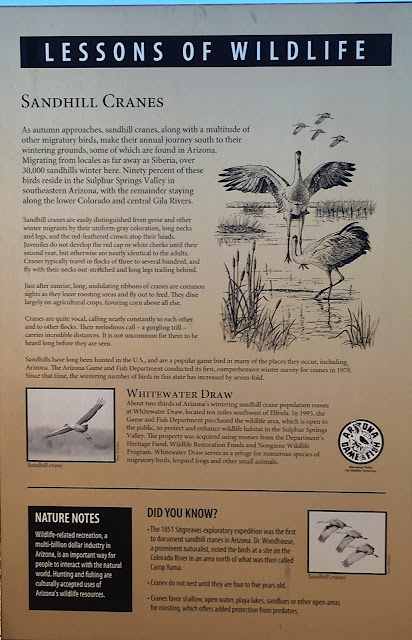 We couldn't believe our eyes when we arrived.  As far as the eye could see there were cranes.  If you have ever heard one they have an unmistakable croaky rumble and they just seem to do it all the time.  There is a nice camping area where you can stay for 3 days while you watch the birds. 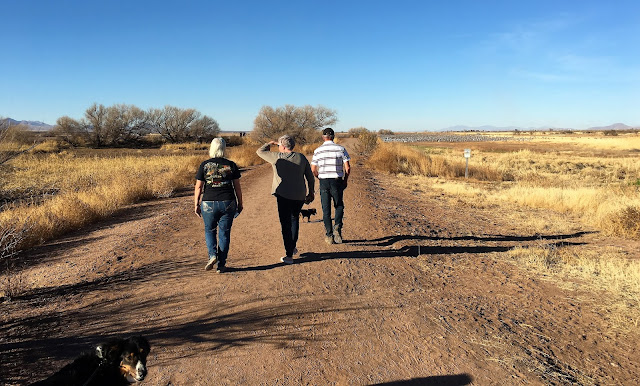 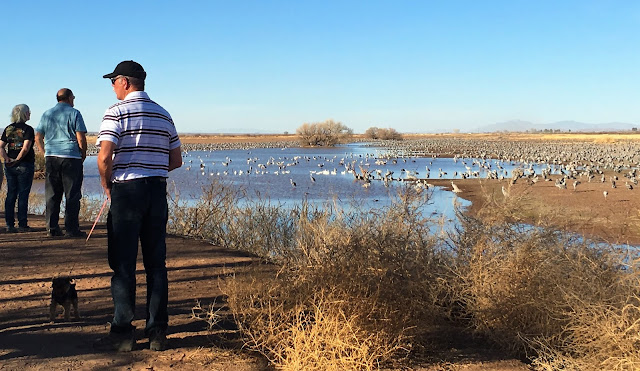 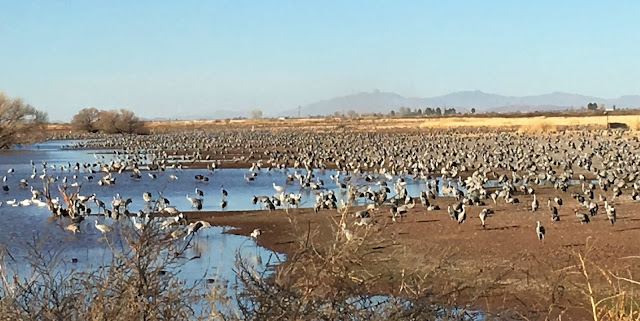 The Arizona Game and Fish Department estimated more than 23,000 sandhill cranes in the valley earlier this year, with the largest concentration of 15,343 at Whitewater Draw. Game and Fish conducts its annual crane count in early January.  The migratory birds summer as far away as Siberia.

Whitewater Draw usually has the largest number of cranes in the region. The cranes fly out as a group at dawn to feed, gleaning grain from farmers' fields. Most of the cranes follow this feeding pattern, but some linger in or near their roosts. They gradually return from feeding between 11 a.m. and 4 p.m. 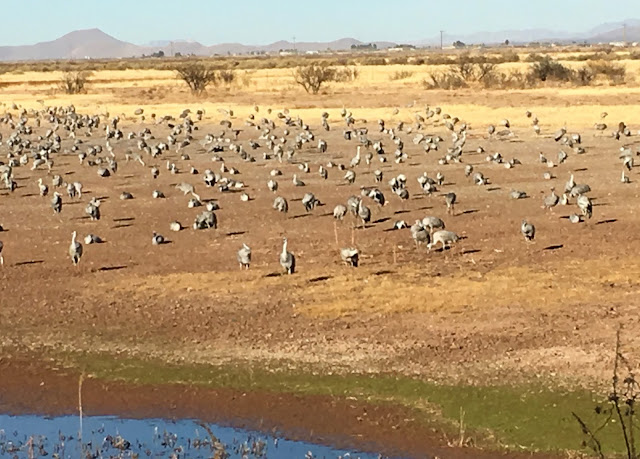 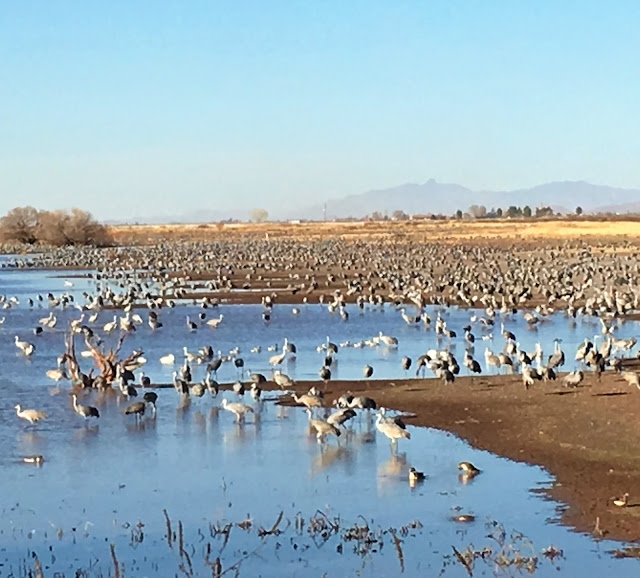 As the shadows started to lengthen, we decided we should go back to the RV's and enjoy what was left of the sunlight.  We hope to be up when the cranes all fly out to feed in the morning. 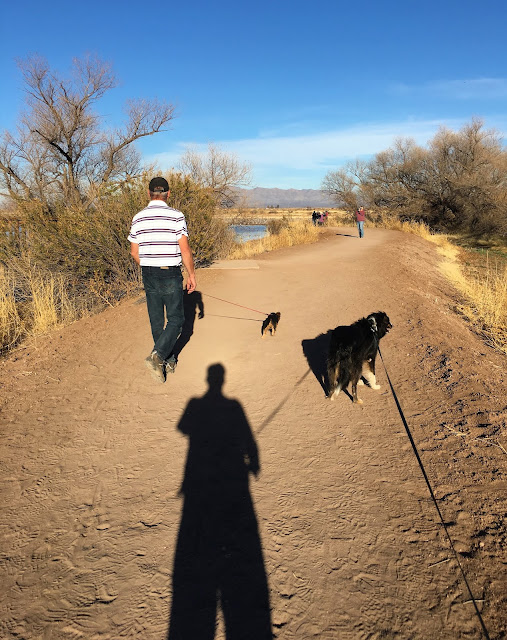 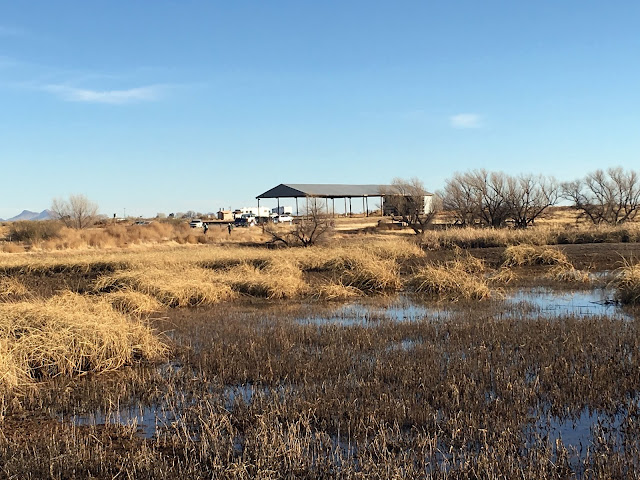 View out our window tonight as the Sandhill Cranes rise off the water. 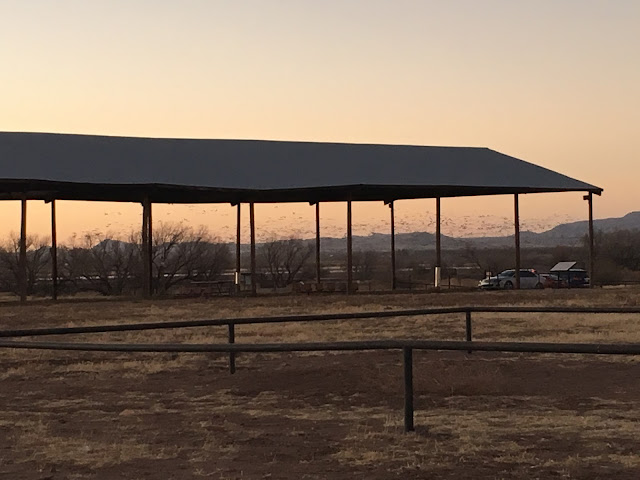 We have a picnic table out back and we enjoyed a couple refreshments and some appy's while we discussed our plan for tomorrow. 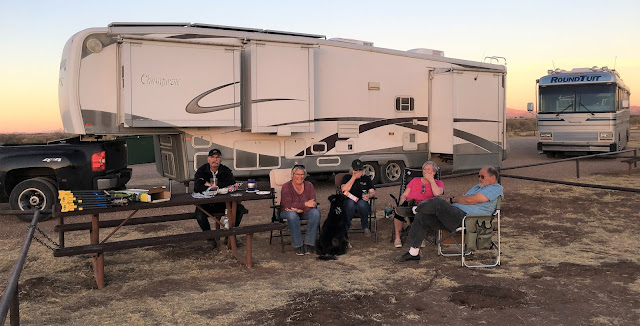 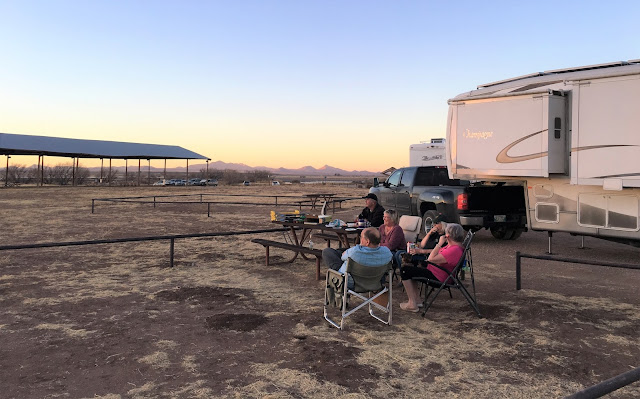 And now that we are back in Arizona I would be remiss if i didn't show a perfect sunset.  I don't think they are this pretty any other place in the world. 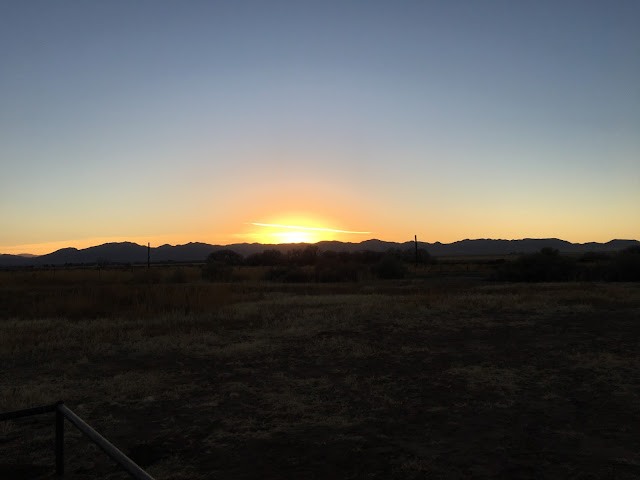 I can never decide which is prettier, the sunset or the purple mountains in the east.  Come to think of it, nobody has ever asked me to decide so I won't.  Both are breathtaking. 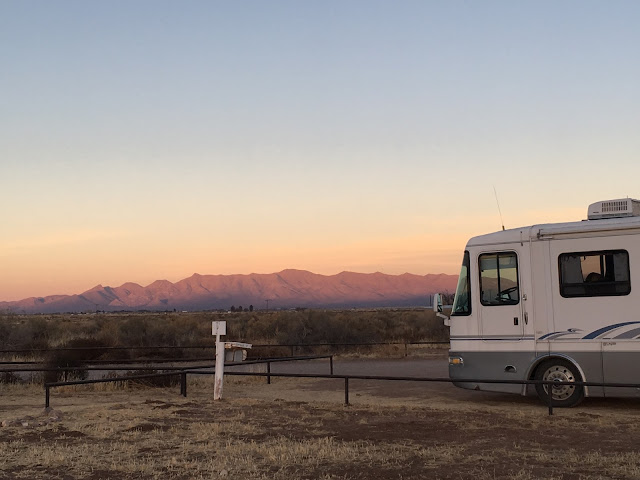 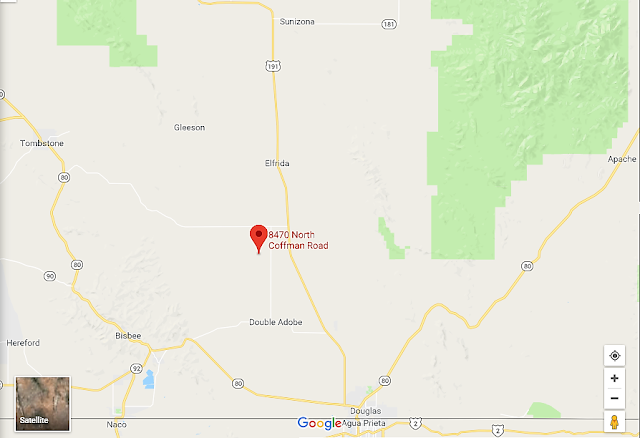 Posted by Lorne Green (A Place Called Away) at 20:05:00
Email ThisBlogThis!Share to TwitterShare to FacebookShare to Pinterest