And the headline reads: 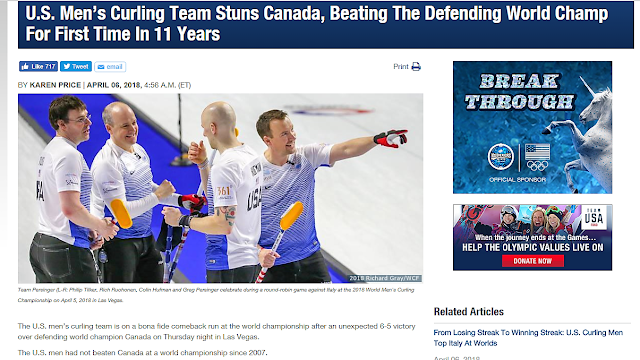 And wouldn't you know it, this was the game we went to see in Las Vegas today.  All morning long Sue and I have been preparing Ed and Lessie and Kyra for the big game tonight.  None of them have ever been to a curling game before so they wanted to know some of the basics.  I got out the coloured markers and some paper and went over the basics with them. 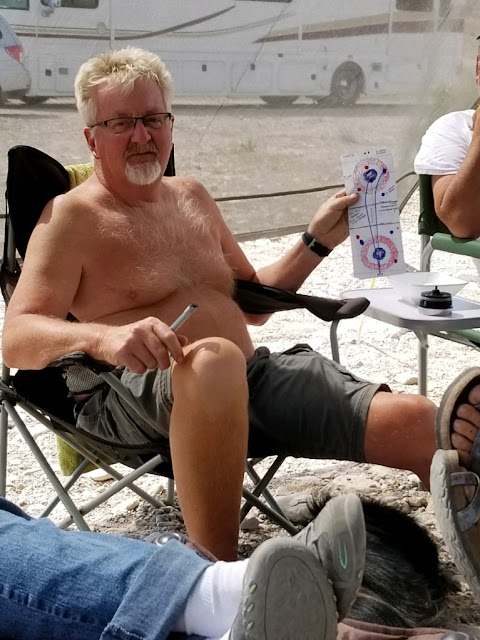 We also prepared them for the fact that the chances of the US winning was slim to none.   Well were we ever wrong!!  It started off with the US making some misses and I thought oh oh, here we go.  But then they got it together and Canada started missing.  It did make for a good game and the score was tied after 10 ends.  The US capitalized on a couple of half shots in the extra end by Canada and drew for the win.   Good for them!!!

We arrived at the Orleans Arena about 6 pm and headed in to the game.  It was about 27C outside so we had to carry our sweaters in. 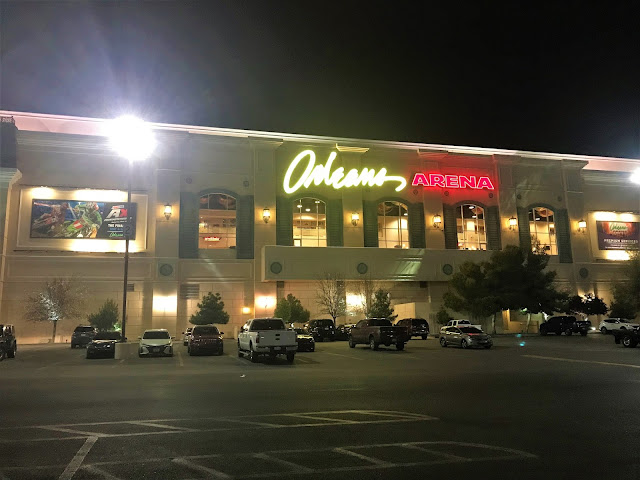 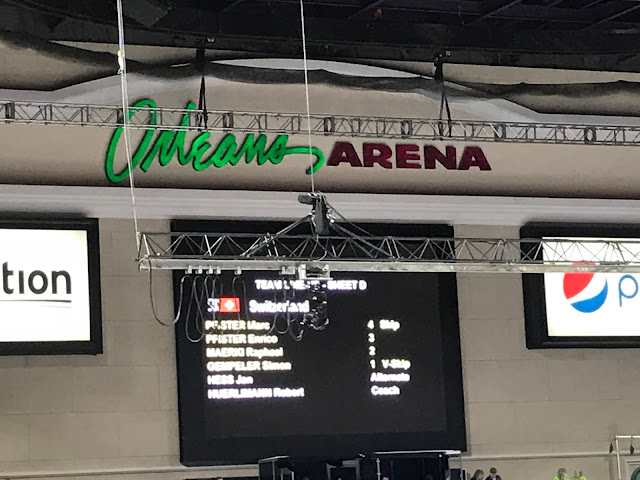 Tonight the US had some Vegas dream that there would be more US fans in the house than Canadian fans.  I'm not sure what they had been smoking when they put out that challenge and I sure hope no one bet on it, but the Canadians probably had them out numbered 10 to 1.  We even brought 3 Americans with us because we knew that the other few Americans might want some company.  It was pretty much a sea of red and white. 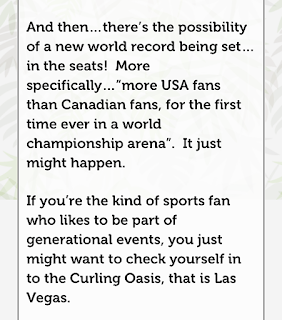 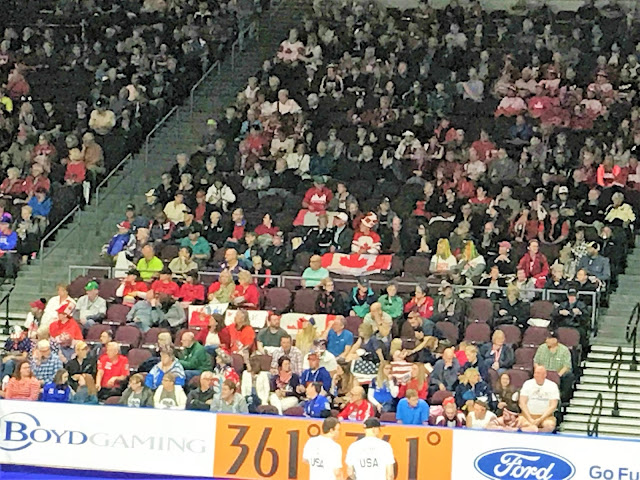 Because I didn't pay attention to which sheet the Canada game was on, we ended up on the other side of the rink.  It was still ok, but I went over to the other side to have a look anyway.  There were lots of empty seats.   They cant fill an arena for a curling event like us Manitoban's can back home.  This arena was similar to our arena back in Brandon for size. 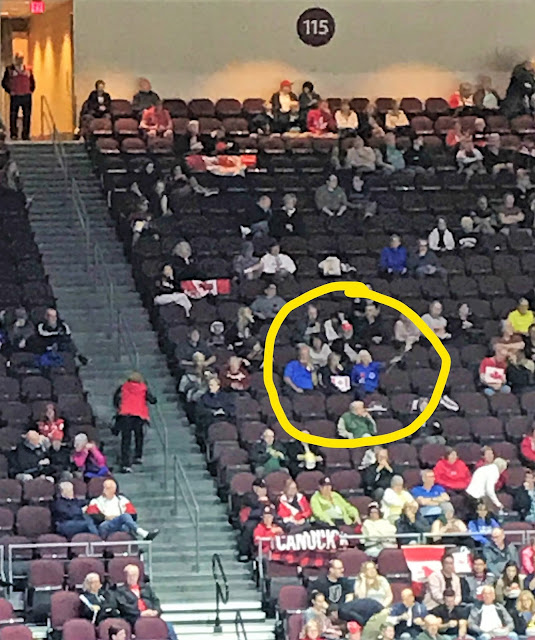 The layout was very professional and very bright as a curling arena should be.  TSN was broadcasting the game live.  I got a shot of Brad Gushue in the hack.  He is a great representative for Canada. 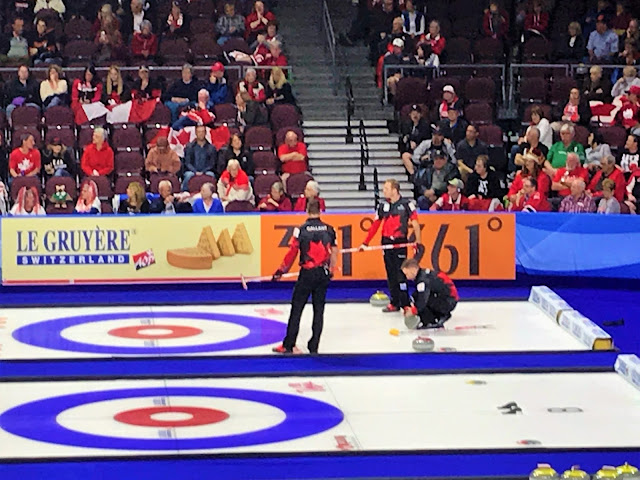 But the highlight of my evening was when I heard a hearty hello and looked over and spotted my good curling friend, Resby Coutts walking towards me.  Resby and I go back a long ways to when the Rivers Curling Club was very progressive and actively marketing itself in the curling world.  Resby Coutts was involved with the Manitoba Curling Association at the time, and my curling club com padre Les Wedderburn and myself had the highest regard for him when it came to securing name brand curlers to appear at our curling club for fundraisers.  Resby could always pull a rabbit out of his hat and get us the best of the best.   His faith in our club saw him present us with the opportunity to host a provincial event, and the 3 of us signed a contract to host the prestigious Provincial Target Juniors Championship in Rivers, over a glass of rum at a hotel in Winnipeg, when there was absolutely no support for allowing a rinky dink rural rink with no hotels to host this event.  The event was a huge success thanks to the overwhelming support we received from all our club members, and we set the bar high for all of the hosts who came after us.   Resby encouraged me to become a member of the Manitoba Curling Association and I sat on the Board of Directors for one term along with Resby and big names like Women's World Champion Jennifer Jones.  Resby served as President of the Manitoba Association a couple times and is now the President of the Curling Canada which was once known as the Canadian Curling Association.  He is here in Vegas to present the medals to Team Canada if they are fortunate enough to win this event.  It is guys like Resby who have faith enough to agree to a dream that was probably bigger than it should have been, but because of that faith and the huge success of that event, I believe the whole importance of rural curling clubs changed.  The big cities had to look at us as partners in the game of curling.   Thank you for your faith in me as well as our club and it was a pleasure to meet you again.  Maybe if we ever get over this warm winter kick I will become involved in curling again. 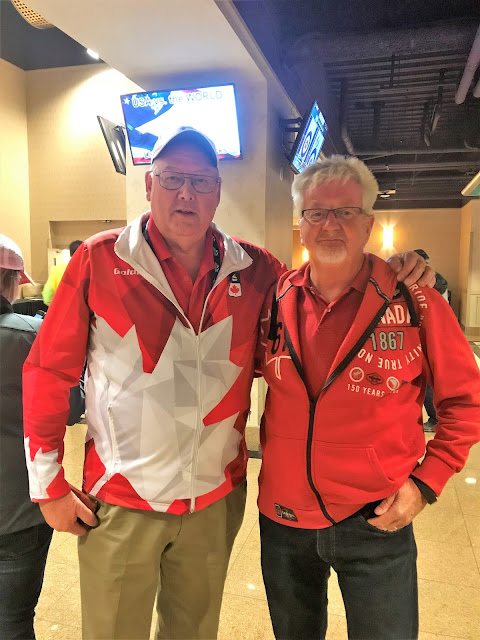 The view tonight comes from my seat at the 2018 Worlds Mens Championship in Las Vegas. 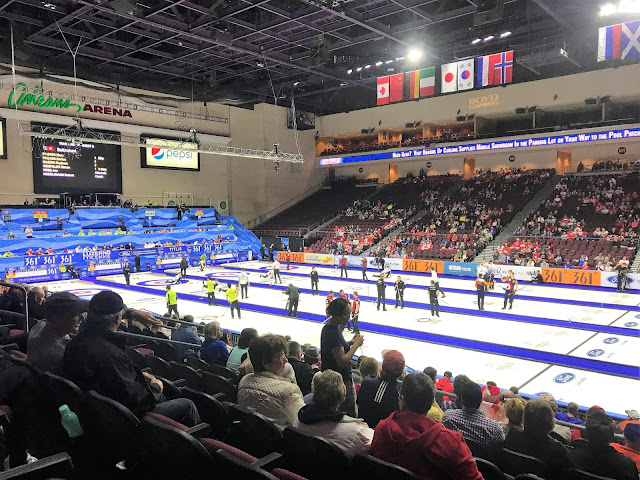 U.S. Men’s Curling Team Stuns Canada, Beating The Defending World Champ For First Time In 11 Years
Posted by Lorne Green (A Place Called Away) at 16:59:00
Email ThisBlogThis!Share to TwitterShare to FacebookShare to Pinterest