WHERE ARE WE? Romantic Escapes RV Park, La Penita, Nayarit, Mexico
NEXT DESTINATION?  Head for the USA April 1, 2020

Charlie and I took a walk down to the main fishing boat area near the Malecon.  One of the boats had just come in from fishing and had lots of Dorado on board.  It was interesting to watch them filet them and I asked why they did it in the sand rather than on a table.  The guy told me if you put sand on the fish it makes it easier to hold on to.  That makes sense and I guess the sand gets rinsed off in the ocean before going in their buckets. 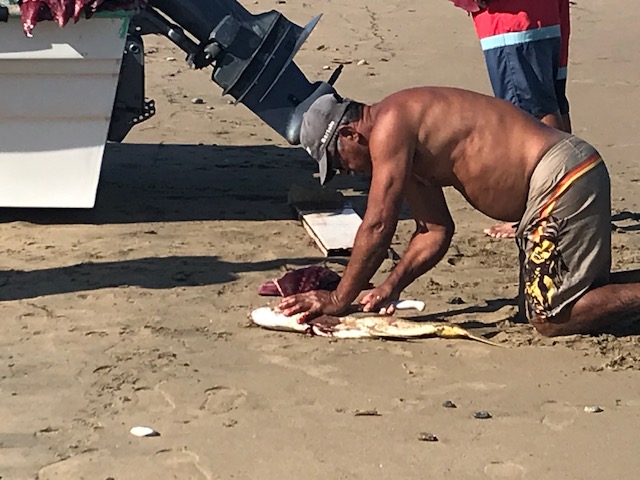 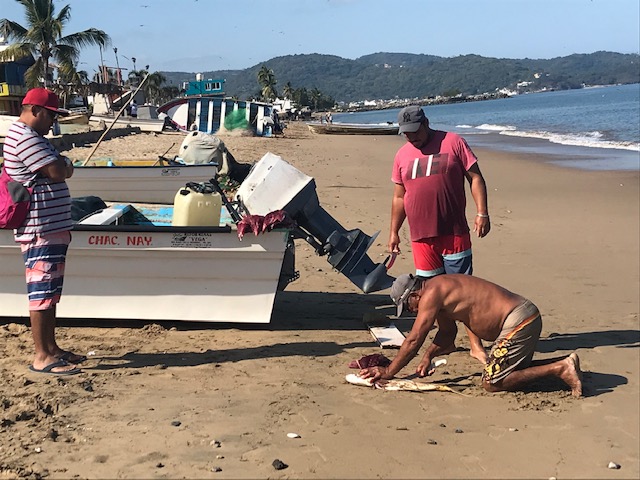 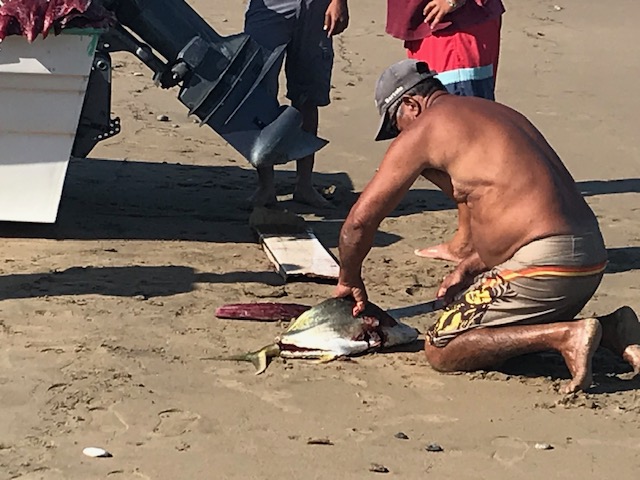 After he has all the fillets done he washes them in the ocean. 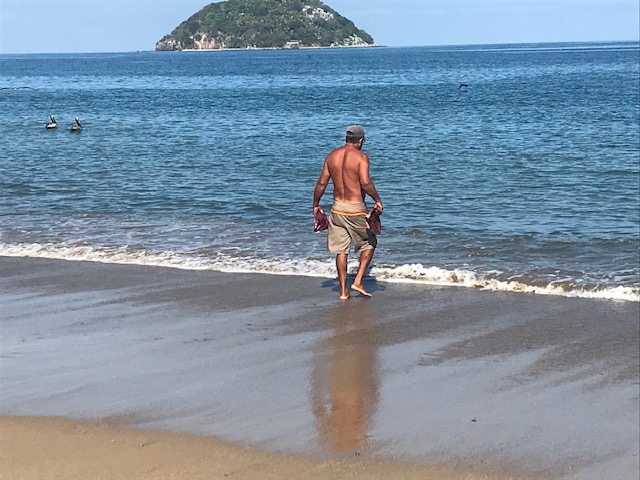 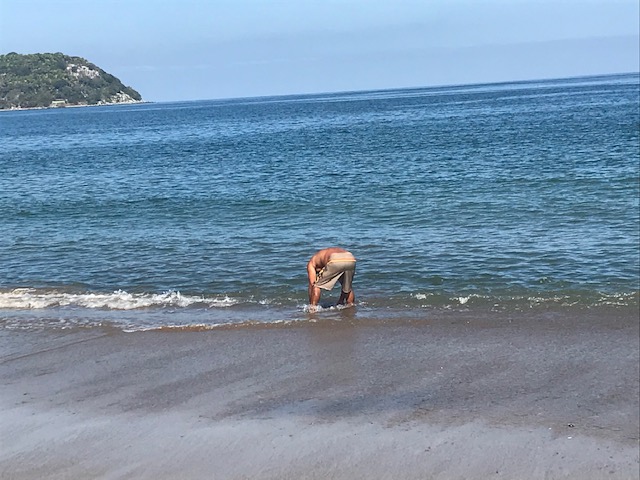 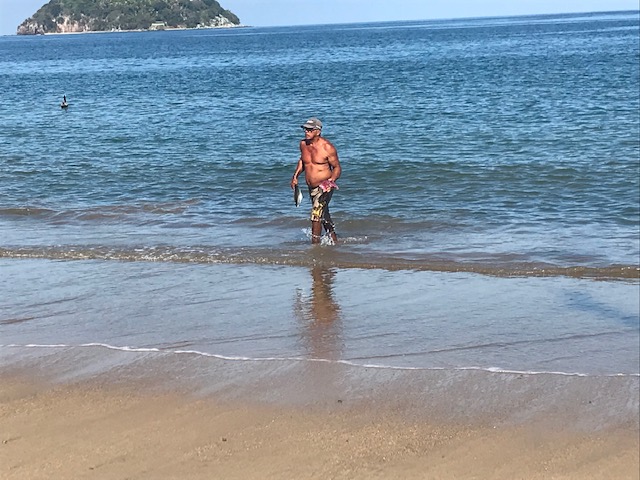 As I was walking home on the beach I noticed how green everything was getting.  Spring is here I guess.  The grass is actually getting quite long. 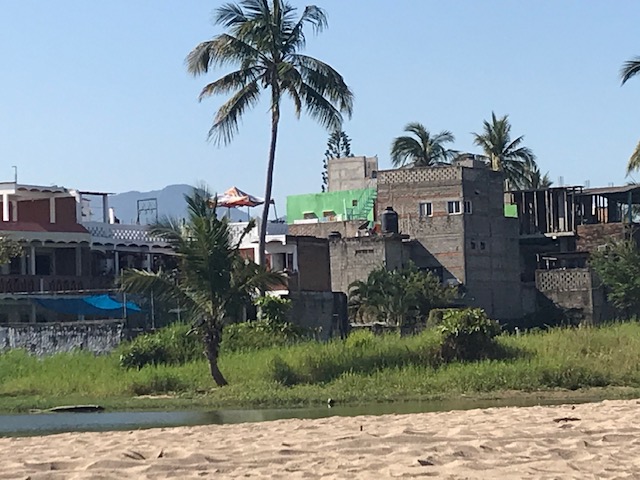 I thought I would take a walk up to the old trailer park to see how empty it is getting.  P & H apparently got away this morning because #51 was empty.  They had said they would drop over yesterday to say goodbye but I guess with Harolds dentist appointment and stuff they must have got too busy.  Safe travels guys.  See you back in Canada.  I did take a walk up to the top where we were most of the winter and discovered that George and Henny had left as well just shortly before I was there.  We enjoyed being their neighbours this winter and wish them safe travels as well.  There is no one left on snob hill at all!!! 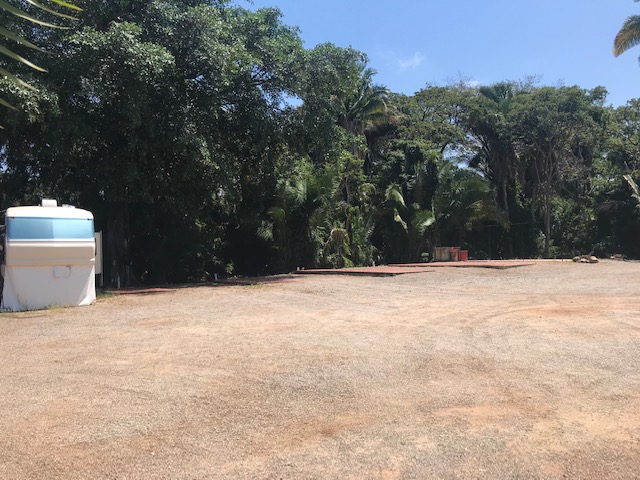 On the way back from the hill there were some boys in the water catching sand crabs.  I stopped to watch and they just dig in the sand about 4 inches deep and rake their fingers along and boom, they have a sand crab.  They then throw it to the guy on shore and he puts it in a bag.  They said they fry them with butter and they are good eating. 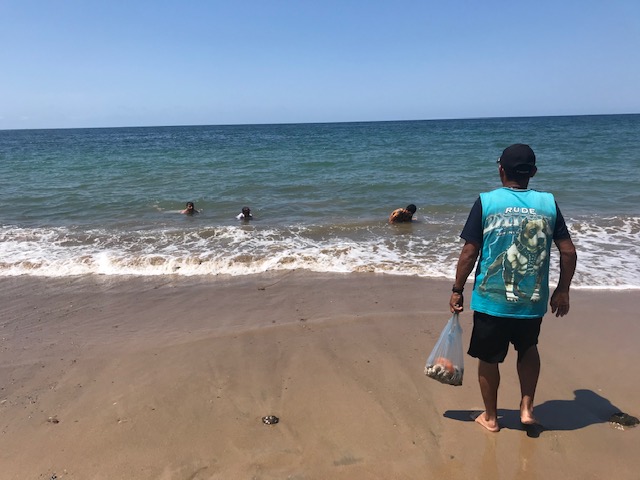 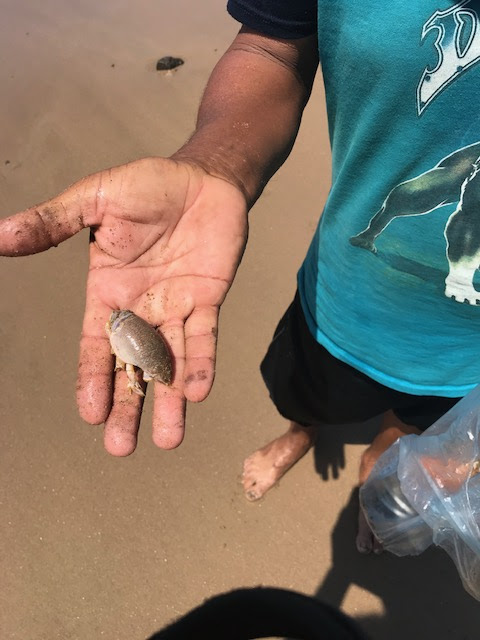 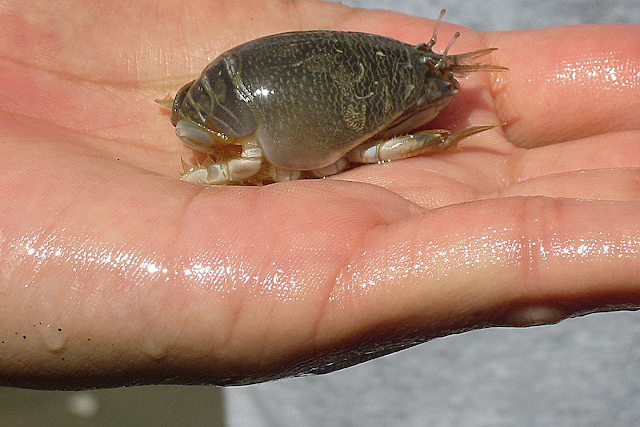 Then later in the day this guy came wandering down the beach with a throw net.  He was catching bait fish I think but he did catch one fish that would probably make a nice meal for his family.  He had a pail with him that he kept all the fish in so the birds would not steal them.  There are so many different ways to harvest the bounty of the ocean if you know what you are doing and the birds know most of the tricks as well. 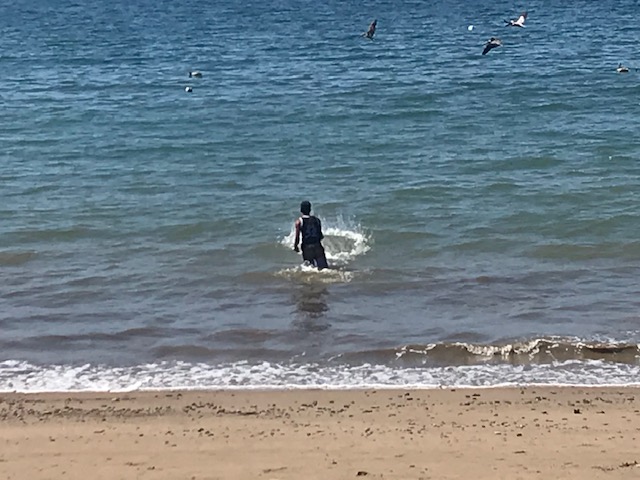 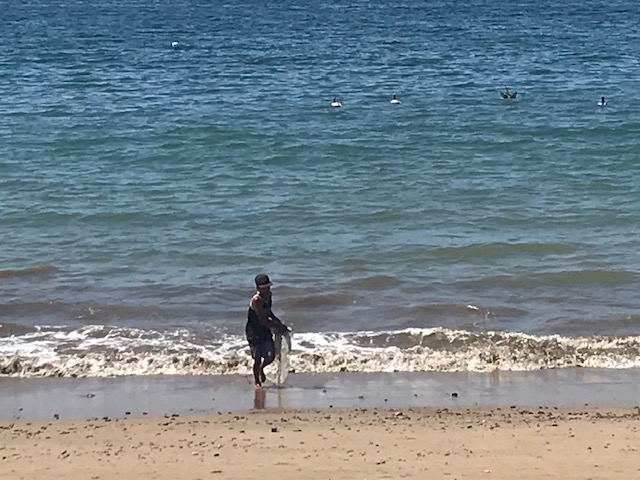 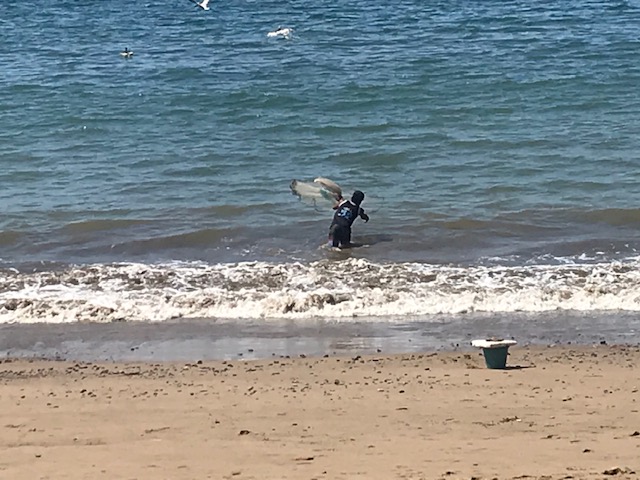 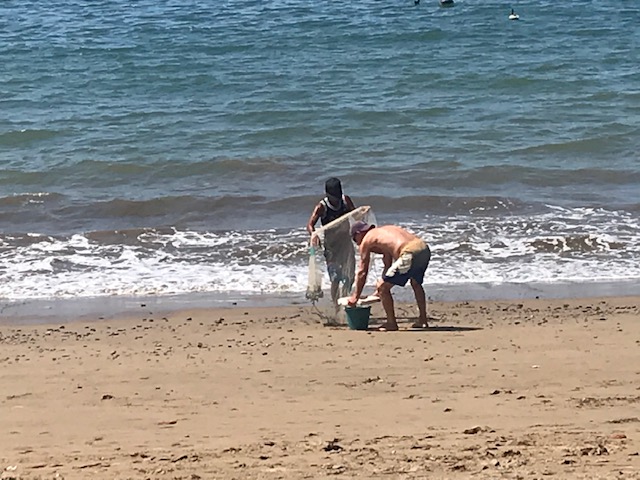 Sue and I headed down town for some supplies and we figure that the people around here have heard of the Toilet Paper situation up north.  These people will not miss an opportunity to make a buck and figure that all of the gringo's heading north will buy TP before they go.  There was no shortage in this store and when Sue went to the bano she said the stock room was full of it. Problem is that all of the gringo's were in such a panic to leave that they forgot to stock up!!!  We didn't even buy any!!!  If you want us to bring any back with us, 50 peso's a roll will get you some! 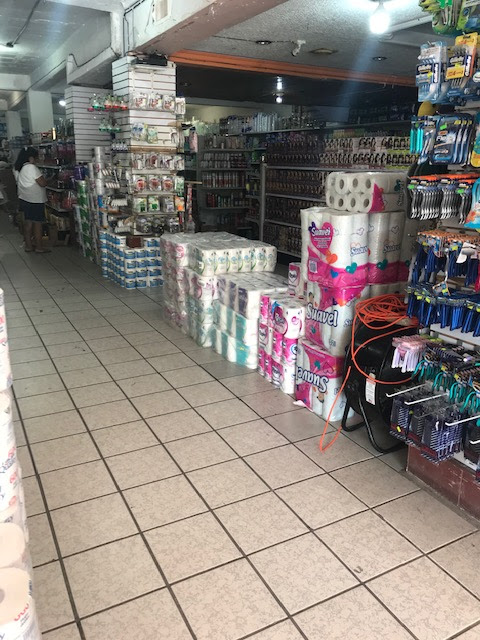 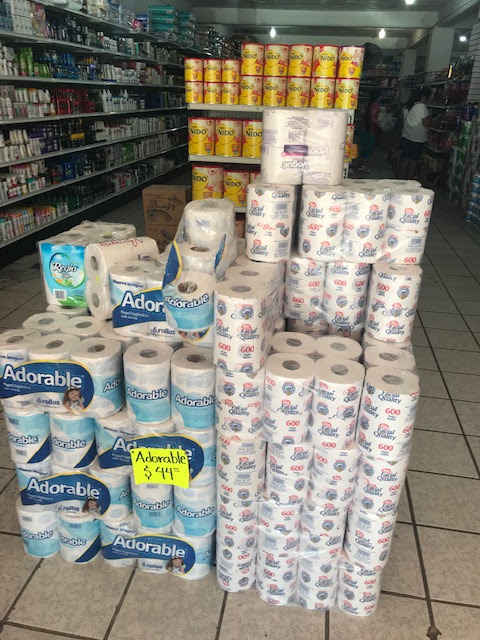 Our park is cleaning out as well.  Our friend Pierre who was going to stay here until the end of April left yesterday.  His family put the pressure on him and he decided to head home early.  Safe travels Pierre and Louise!!! 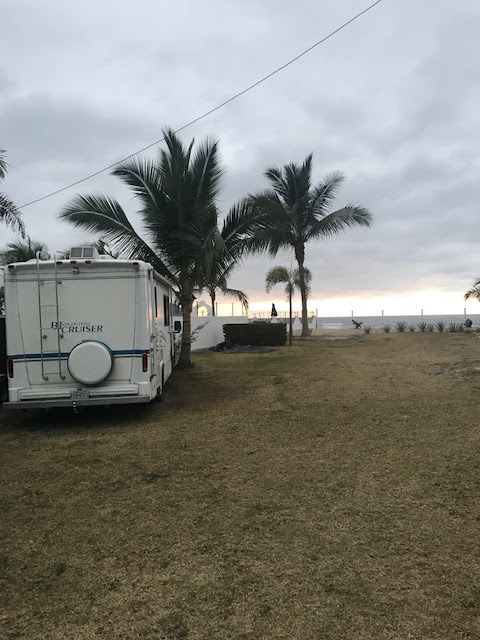 Charlie and I had nothing left to do except sit and enjoy the cool breeze.  Not a bad situation to be in.  Hope your day was as good as ours. 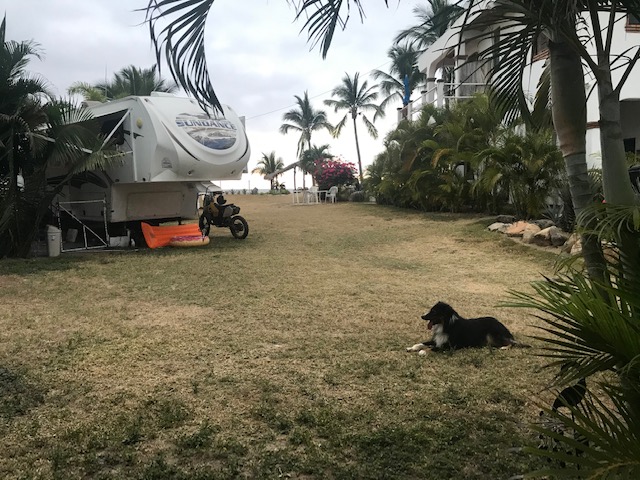 Posted by Lorne Green (A Place Called Away) at 10:42:00
Email ThisBlogThis!Share to TwitterShare to FacebookShare to Pinterest