Today the sun shone so we spent the day just soaking it up.  We didn't do much other than sit in front of the Ponderosa and relax.  Sometimes when we opened our eyes there would be a ship going by.


Once we looked up and a guy was unloading his boat right beside us.  The water gets about 4 ft deep really fast, but you can walk out quite a ways and it doesn't seem to get much deeper.  It makes it easy to launch a small boat. 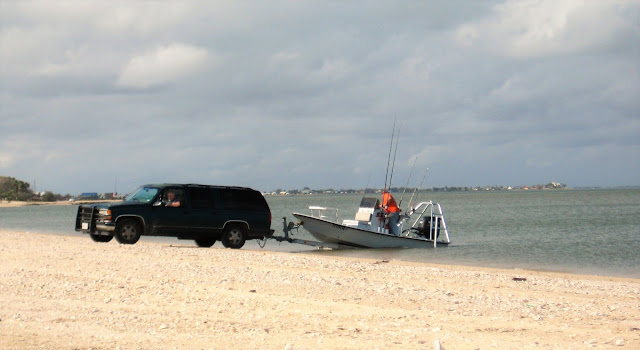 Late in the afternoon Charlie and I headed down to the Indianola Fishing Marina to see what was happening.  We went in and a lady worked really hard to sell me a fishing deal.  She said if I fished on her deck it would cost 5 bucks and I would have to buy a state license for 68 bucks. I said it would be cheaper for me to buy a fish dinner in their restaurant.  She said that as a matter of fact they had a 10 oz rib eye steak dinner on special today for $9.99.  So thats what Sue and I did tonight and it was really good. 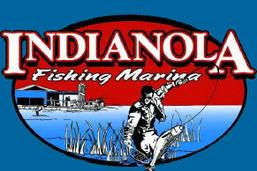 A little story about the lady that I was talking to this afternoon at the Marina where we ate tonight.  Now remember that we are in redneck country here and I love it.  She was a great lady and I could identify with her, because she had the same amount of teeth as I have.  She was asking me "where y'all frum?"  I told her and also told her we were parked on the beach down at Magnolia.  She said she lived down that way.  She saw my dog and was quite concerned that the dog didn't wander off the beach into the marsh because she said that as much as people say there are no salt water alligators..."there is, and thays big, and thays out to eat yur kids."   I guess I had better keep Charlie on a leash.

Our view out the window late this afternoon as the fog rolls in from the high humidity. 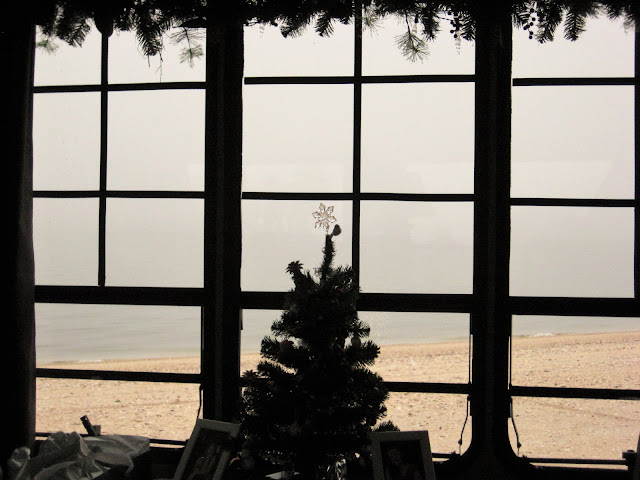 Posted by Lorne Green (A Place Called Away) at 20:53:00
Email ThisBlogThis!Share to TwitterShare to FacebookShare to Pinterest