Lots of action around today.  We are going to a Baptism today and here is a picture of all the candidates!!  NOT!!!  We will do that later.  But they did have a park pool volley ball tournament and it draws a big turn out.  They had 4 teams of 10 I think and they played in a double knock out tournament.  It was an awesome day weather wise with just a little overcast but temperatures around 25C.  Lots of hooting an hollering and splashing went on.  I'm not a volley ball player so I passed on encouragement from the sidelines. 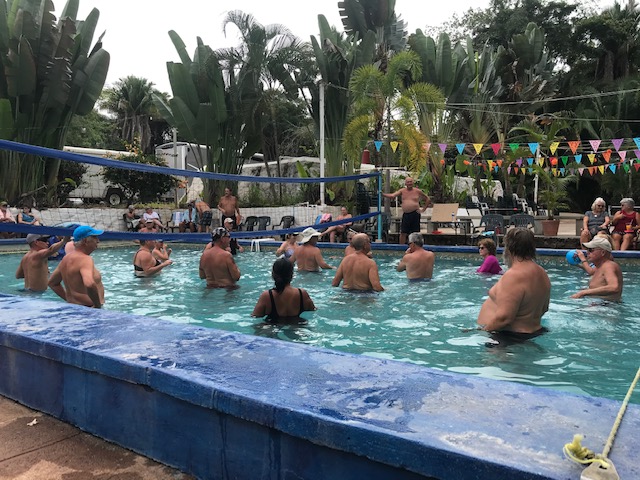 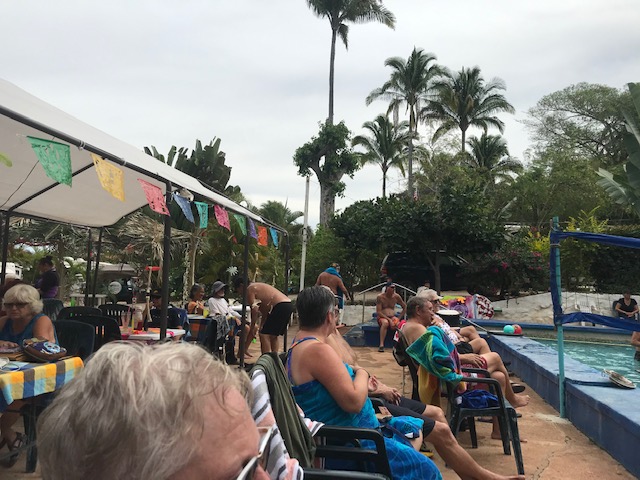 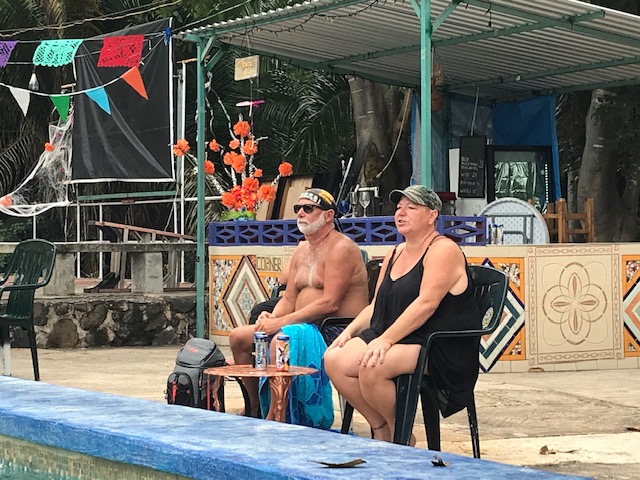 And of course the usual championship photo.  Not sure what the team name was but here they all are with bragging rights until next year!! 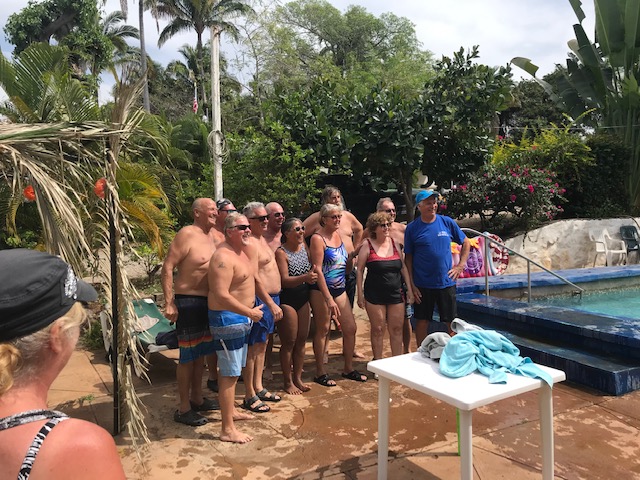 After lunch, Sue and I went for a little walk on the beach.  Here are a couple thinks we saw.  This stingray was washed up on the beach.  He was probably 8 feet long from nose to tail.  Something big obviously wanted him for dinner and won!! 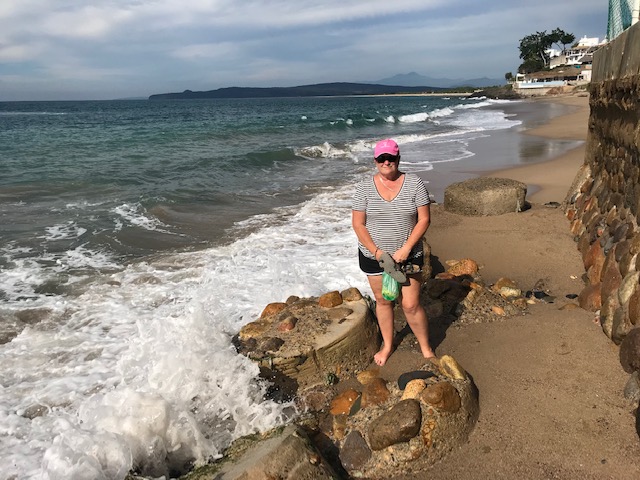 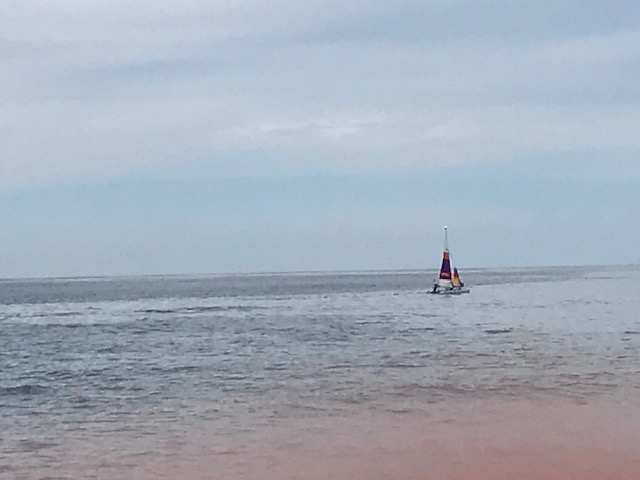 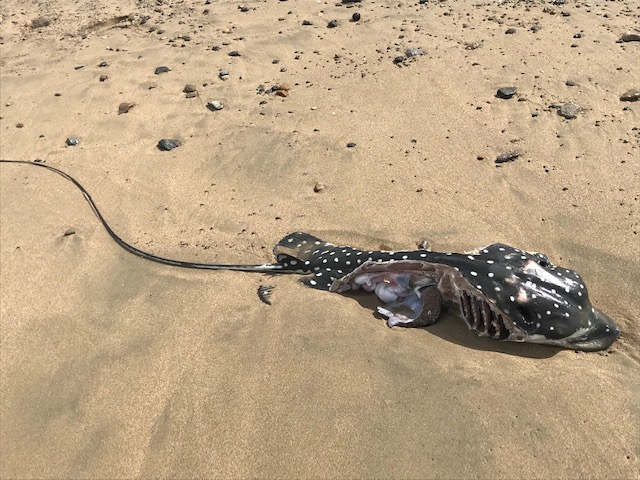 We had a special honour today.   Kenia's sister Itsury has a baby girl named Katerine who is 5 months old.  It is time for her to be baptised and in the Roman Catholic faith, that is a big event.  And so it was. 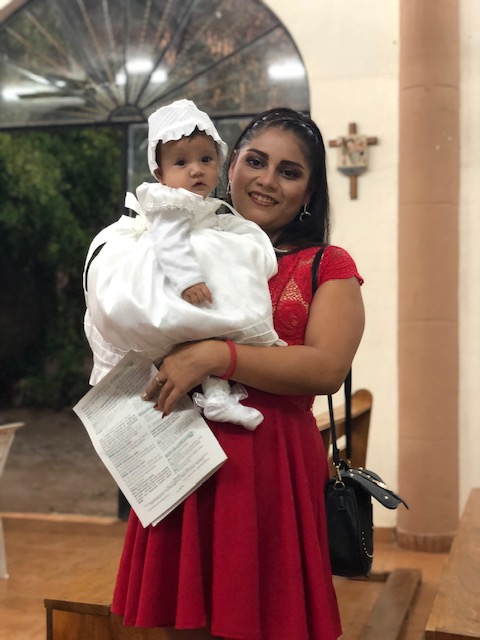 Kenia and Abuela invited us to be their guests at the ceremony and we were tickled pink to accept!!  We picked up Kenia, Oscar, and Gramma and headed to Chacala for the big event.  First thing was to attend mass and the baptism at the local Iglasia.  Of course the entire service was in Spanish but you know what?  Although we have only been here for 3 months we could pick out some of the words to figure out kinda what was going on. 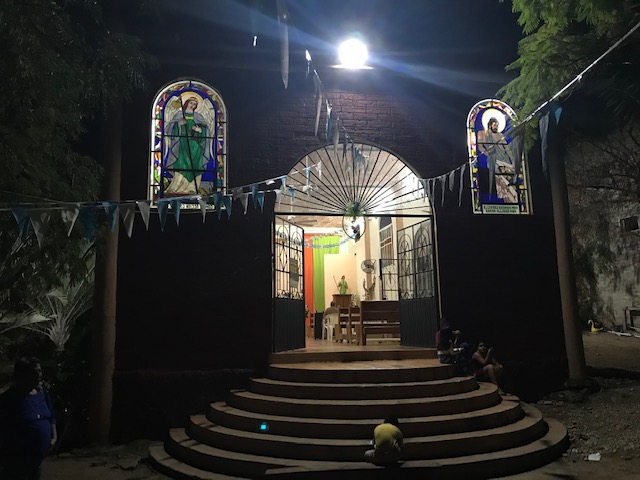 The church bell was tied up in a tree and Oscar really wanted to ring it. 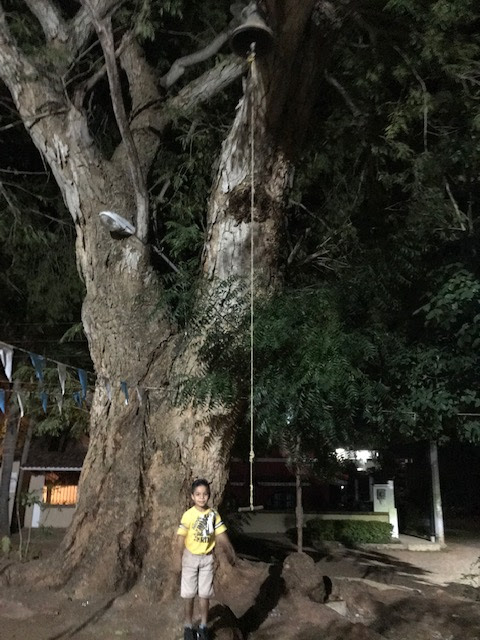 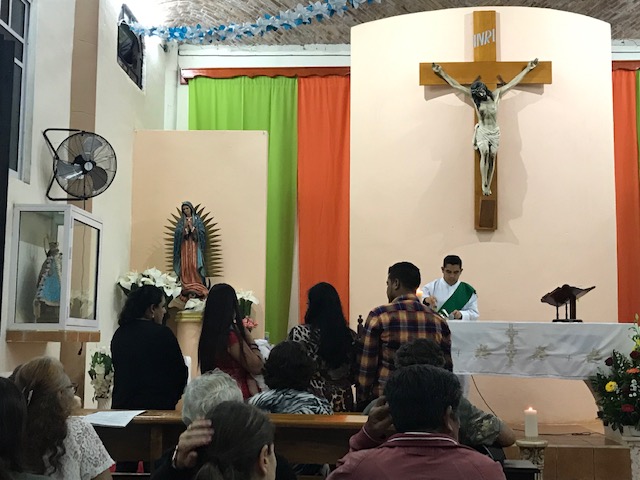 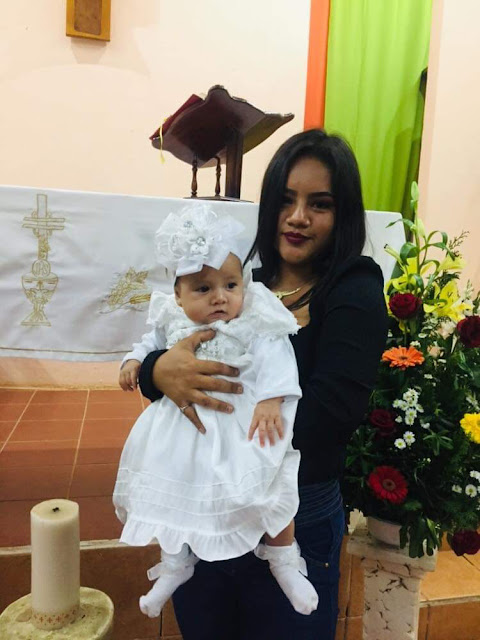 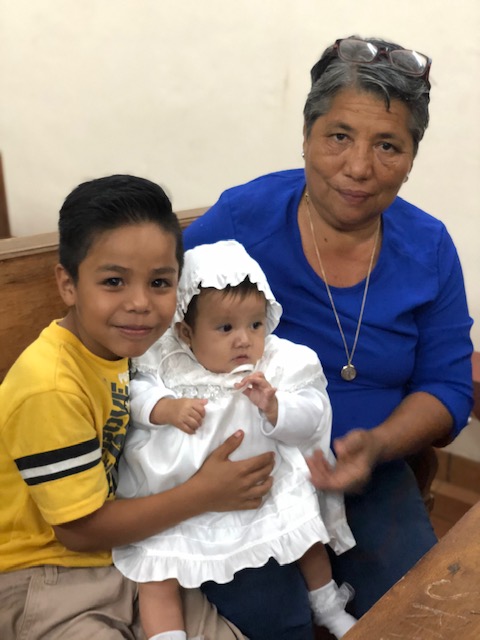 And of course some shenanigans from Kenia.  During the service I look over and there she is doing this. 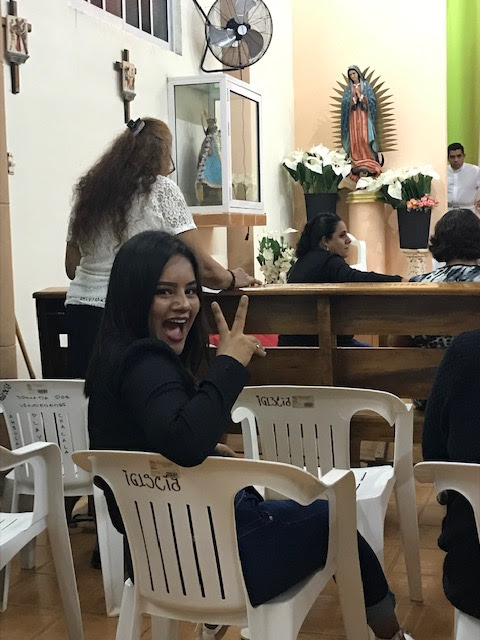 I shake my finger at her and bow my head reverently.  When I look up again this is what I saw.  Notice the look on the face.  Like a wayward kid!!  Right Sheri? or Kaitlyn? 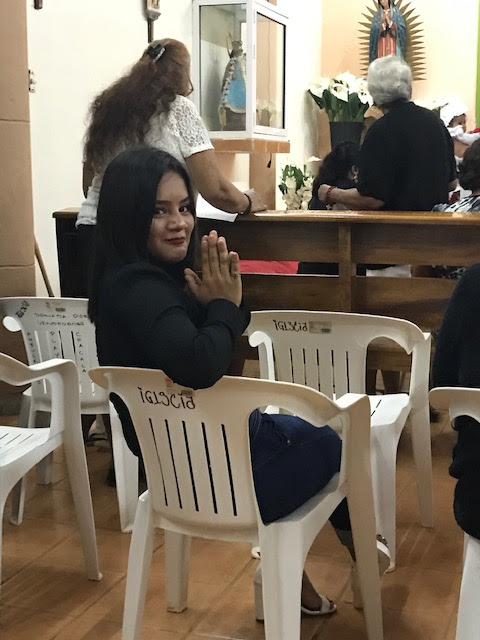 Well every good baptism has to have a good party after as well!!  An so it was!  We headed to the park for a great outdoor celebration.  Everyone chipped in and brought something to eat.  Carne, frijoles refritos y arroz con maiz. 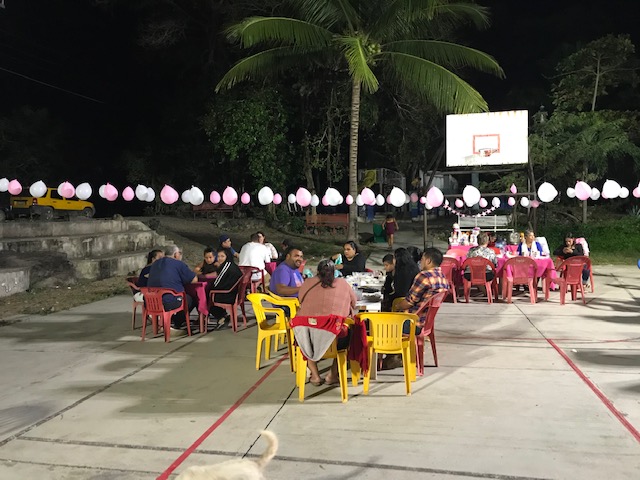 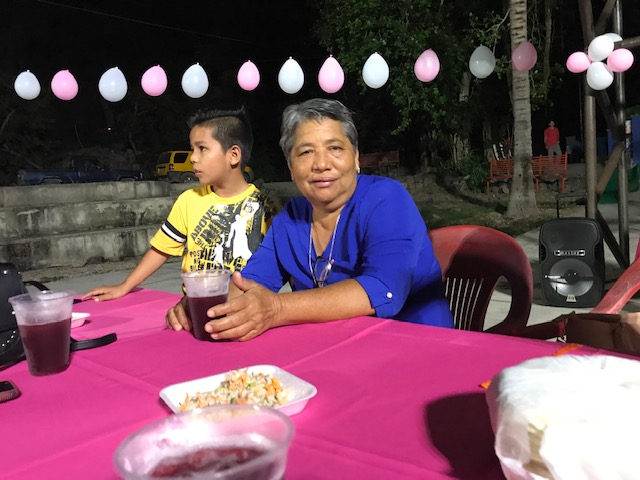 And some stringy cheese called caso oaxaca.  Any kid in the world would love it.  It is like our string cheeze! 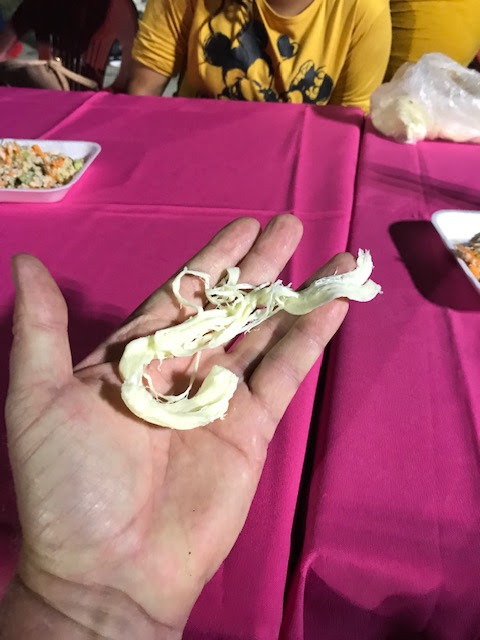 Things like this are why we came to Mexico and everyday never fails to amaze us.  We are coming to conclusion that the Mexican people are super caring and accept us unconditionally as long as we put in a little effort as well.  We are thankful for Cecie, Tina, Kenia, Karen and Oscar for introducing us to this great culture.  I should be saying "stay away because it is dangerous" because guess who is actually changing this country!!  Yup, the tourists.   And yes we are a couple of them, but we hope that we can come here and enjoy it without trying too hard to change it. 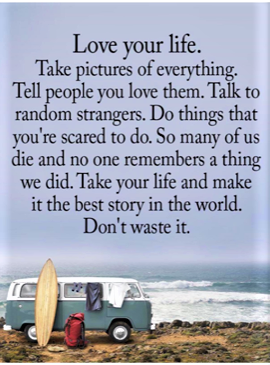 Posted by Lorne Green (A Place Called Away) at 16:22:00
Email ThisBlogThis!Share to TwitterShare to FacebookShare to Pinterest