Today was the last day of the Carnival here in La Penita so we all decided to go see the parade again.  It was supposed to be bigger than the one last week, and it was, but it was as slow as molasses in January.  When we got down town about 4:30 or so the streets were blocked off and the cars were mostly gone. 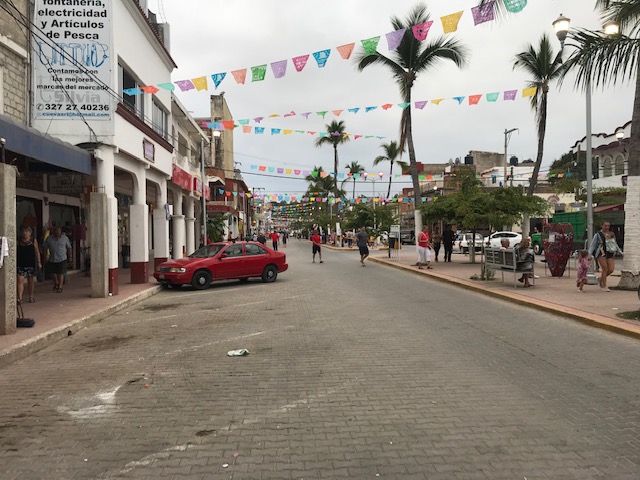 So while we were waiting for the Parade to begin we went for supper at Aloha Pizza with Pat and Harold.  Had a really good supper. 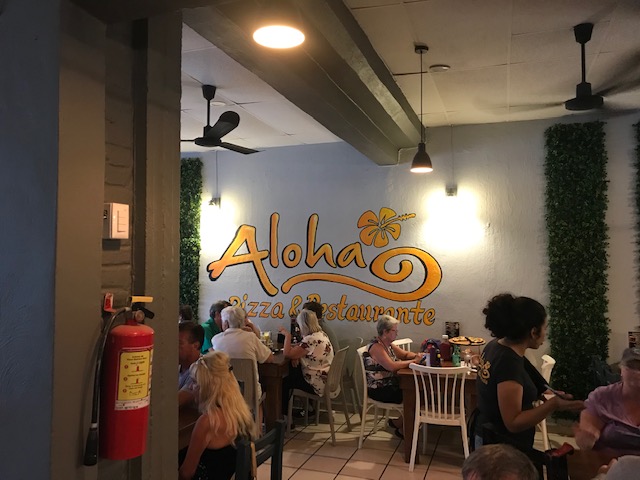 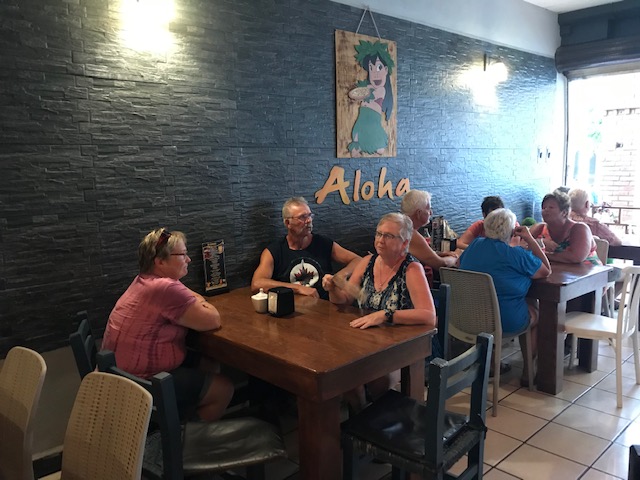 Everyone else had pizza and I had a pork thingy and was it ever good.  It was like half a pork roast with a baked potato and veggies.  I didn't eat my veggies cause my mom wasn't there to tell me to. 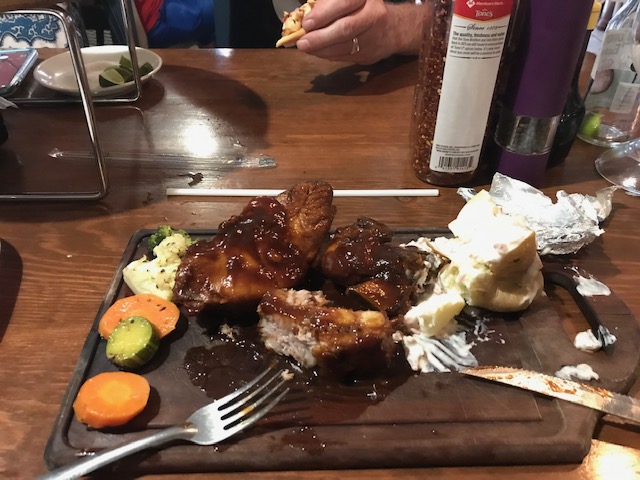 While we were eating there was a band playing outside and lots of people were starting to dance to the music in the street.  It helped to pass the time while waiting on the 5:30 parade which didn't start till well after 6!!  Lol.  That is how it is in Mexico. 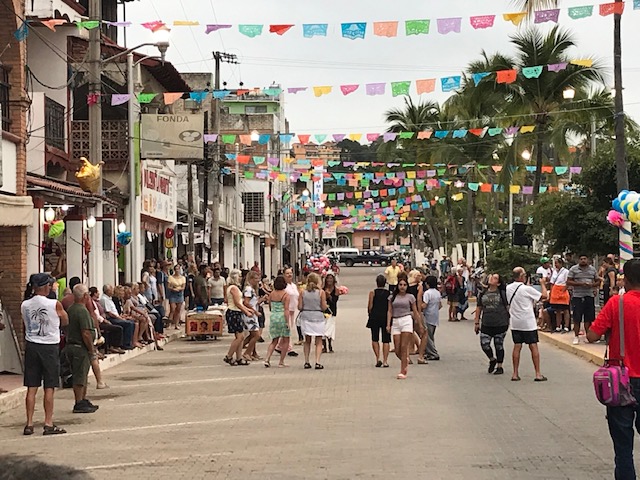 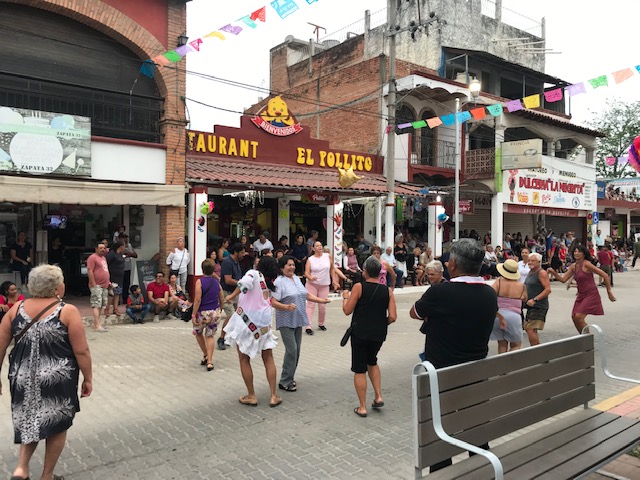 When the parade actually started, it moved at a snails pace.  You sort of looked at a float as it got in front of you, then went and sat down on the sidewalk until the next one came along. 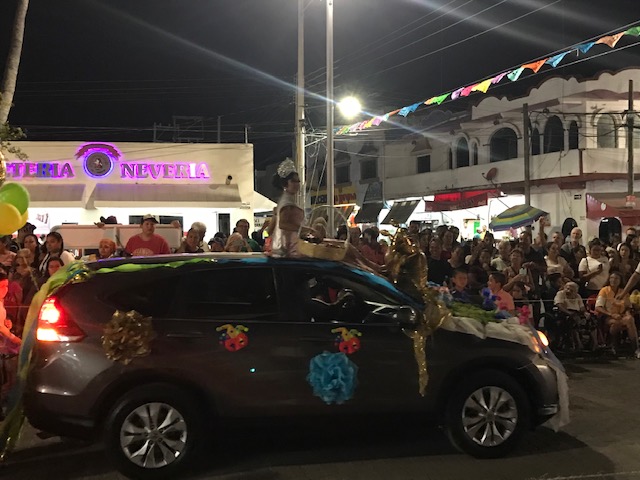 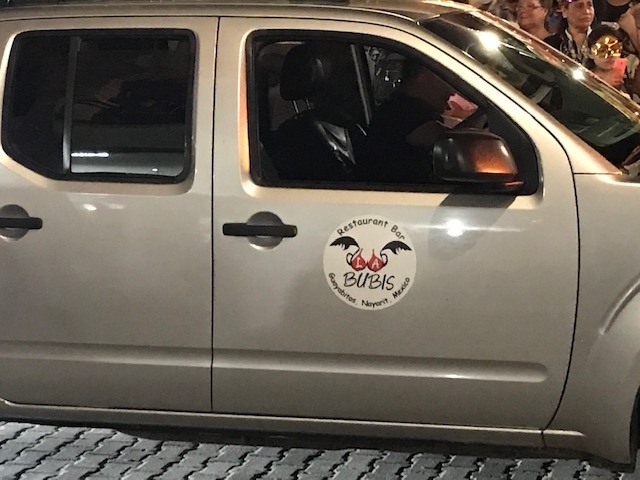 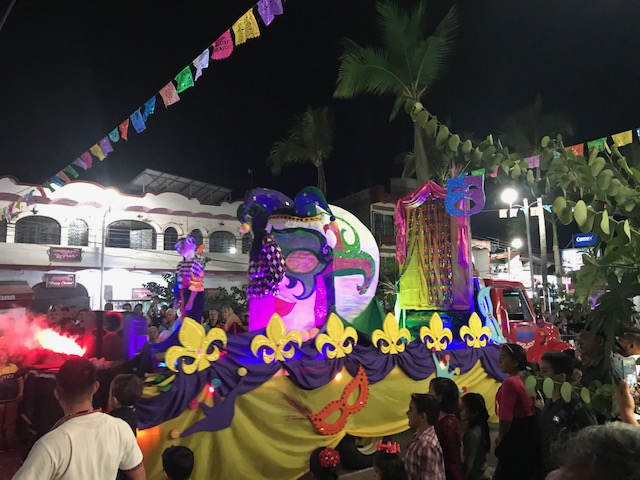 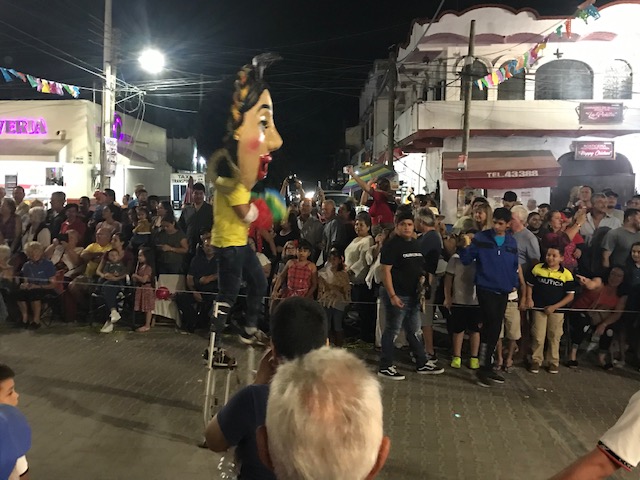 A few of the floats were bar floats and the tequila was flowing.  They just pour it straight down the hatch around here.  Not sure everyone was of drinking age but nobody cared. 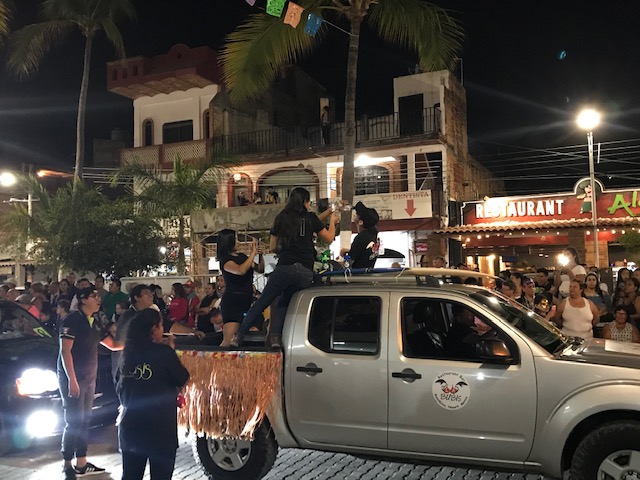 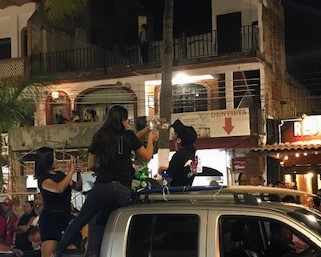 We were going to meet Gramma Tina, Kenia and Oscar at the Carnival and have some fun on the rides and games.  But before they arrived I had time to check out the Bano's.  Later in the evening there were probably 10,000 people in the town square and there was only 1 Bano.  It had one stall for ladies and one for men.  Can you imagine how many porta potties we would have to have at home for 10000 people!!!  I have no idea how they manage it here!!  Anyhow they charged 5 pesos to use the bano so if even half of the people used the bathroom that would be 25000 pesos total for the evening. 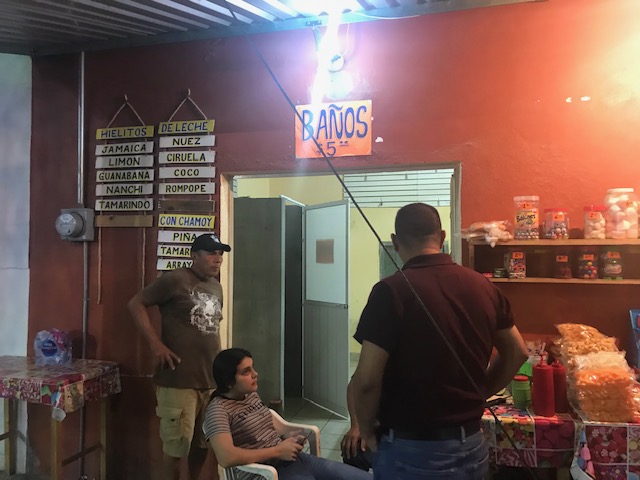 And there was lots of beer to keep the Bano's busy.  This was only one of the trucks of beer. 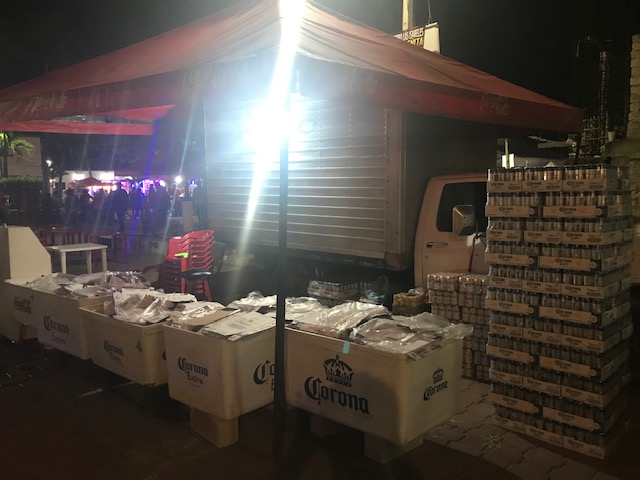 I got a picture of a Benita Senorita just hanging around! 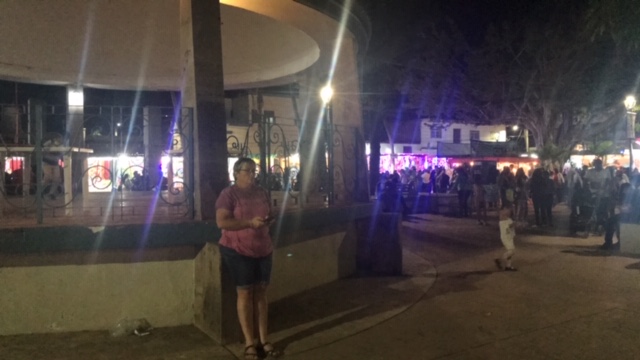 When our friends showed up Sue and Kenia went on the first ride.  The ride was crazy fast and went and went and went and the music was so loud that I was worried that my implanted defibrillator might go off because it was vibrating in my chest with the base of the music!!!  I had to move away around a brick wall before I couldn't feel it any more.  Sue almost woofed her cookies before the ride stopped. 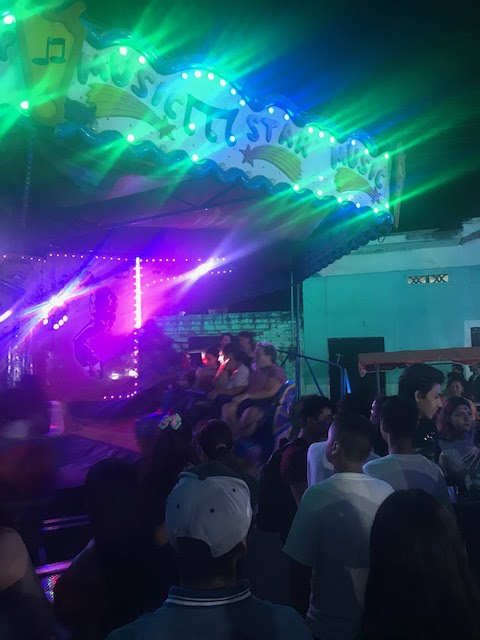 We found some rides for Oscar and some games for the rest of us to play. 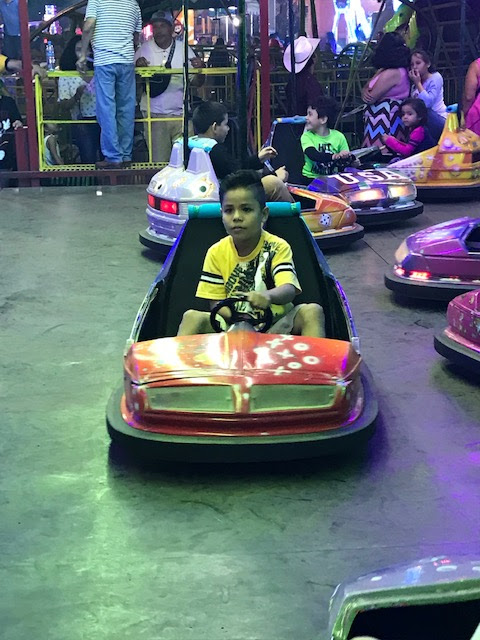 The gun game was real BB's and the poor guy running the game had to duck the guns being fired all around him.  He did real good for only having 1 eye. lol. 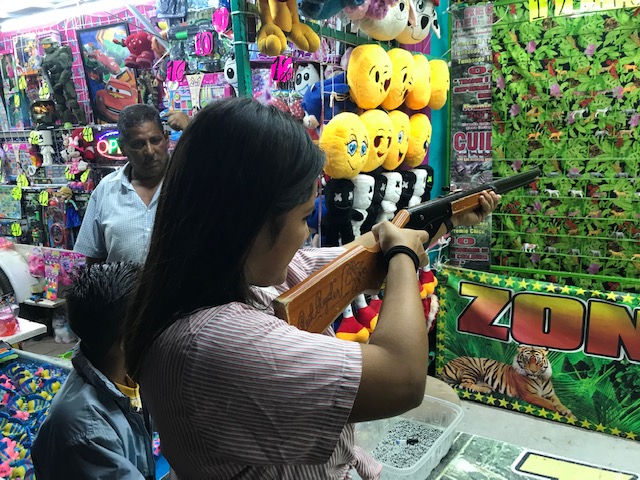 And the game where you got to throw 3 rocks at the beer bottles.  They had old tin sheeting behind so it made an awful racket when you threw the rock.  It was like SMASH, BANG, RATTLE when you broke a bottle.  Kenia won a free beer on the first throw!!  Good girl wouldn't take it and gave it to me.  Remember she is only 17!!!  Here she is winding up!! 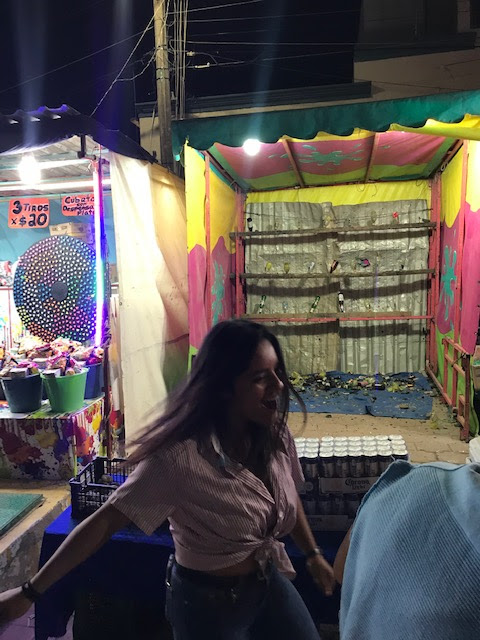 We had a great evening doing the Carnival and parted ways and headed home about 11:30pm.  Yawn!  That was about 3 hours past my bedtime.  Nothing makes you realize how old you are getting like hanging with some young folk at a Carnival!!  Hope your day was fun as well! 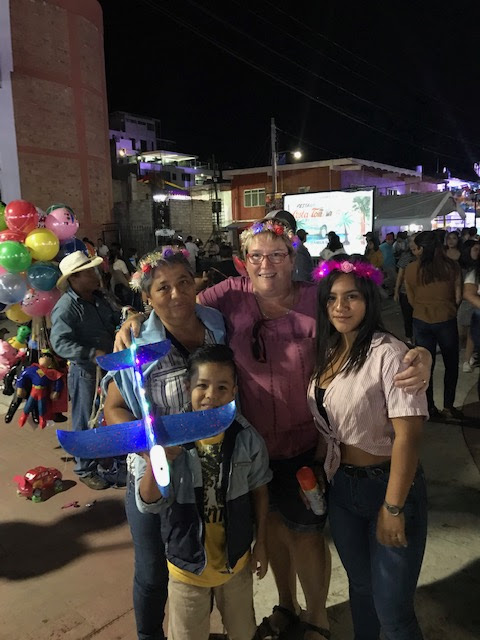