Friends leave and a Parade

Yesterday our neighbour Michelle came over to tell us that due to a family situation back home they will be packing up and heading out for home on Friday morning.  Her and Tim are from Pennsylvania so they have a lot of miles ahead of them.   Rob and Ann will be going with them for the first part of the way out of Mexico.  So there was a lot of hustling to get hooked up and ready tonight. 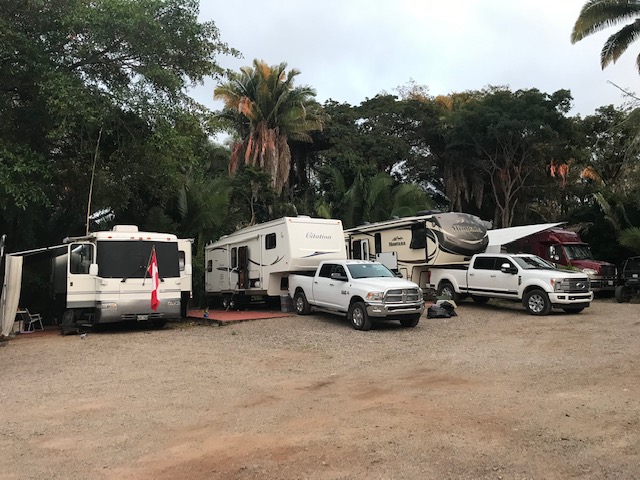 And then when we woke up this morning they were gone.  The northern migration has begun.  We wish both couple safe travels and we hope that everything at home turns out ok. 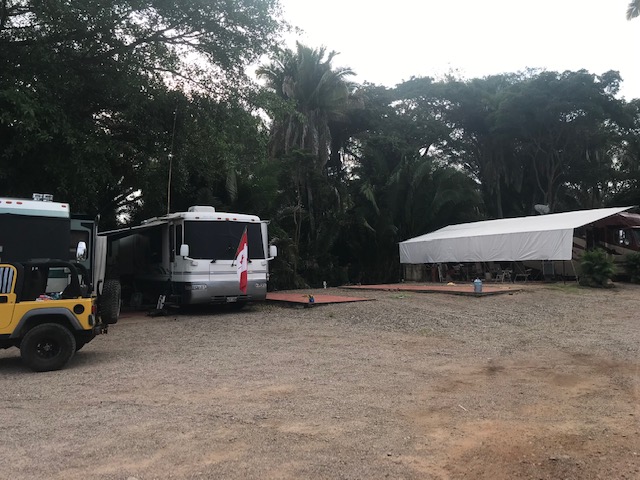 I got busy and defrosted the fridge today.  This is the first time we have done it since we left home, and with all the humidity here, I am surprized we didn't have to do it earlier.  We did leave it a bit long this time as the ice chunks were fairly large. 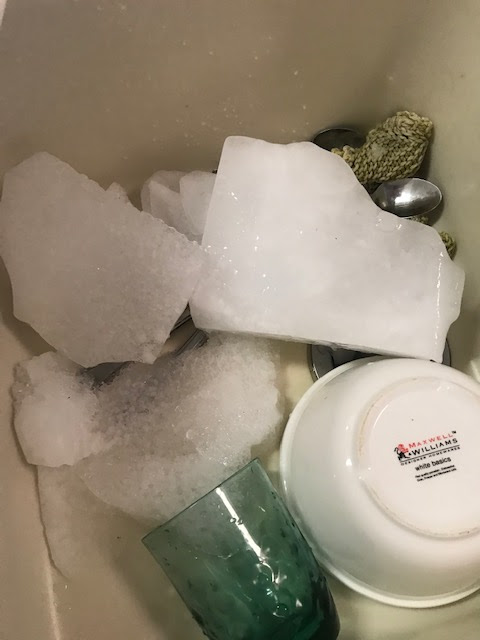 I did a little bit of energy savings while defrosting.  Sue was making beef jerky so she had the dehydrator going, so I robbed some of the heat from it and blew it into the fridge to speed up the melting process.  It worked quite well and in no time we had a clean fridge. 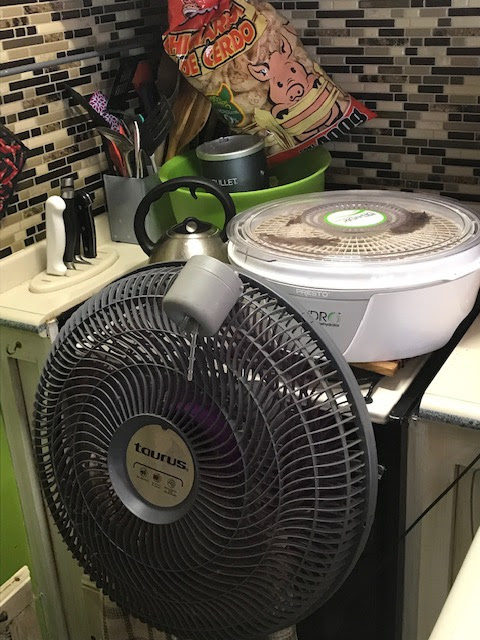 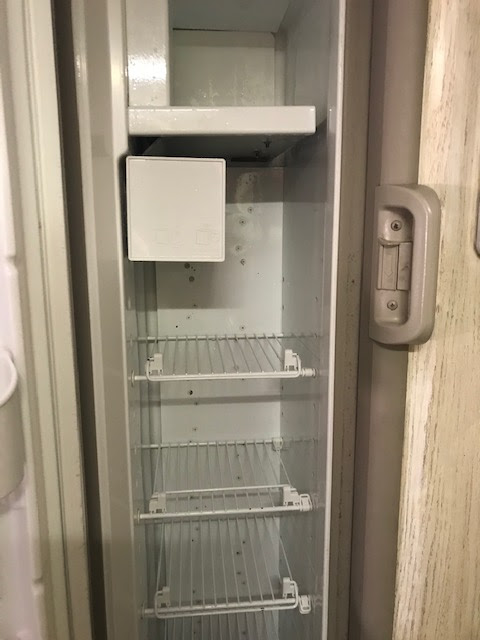 Later in the day was the good old Beer Can races.  Had fun today but didn't win a lot.  They were showing off some of the decorated cans.  People go to a lot of work to create them. 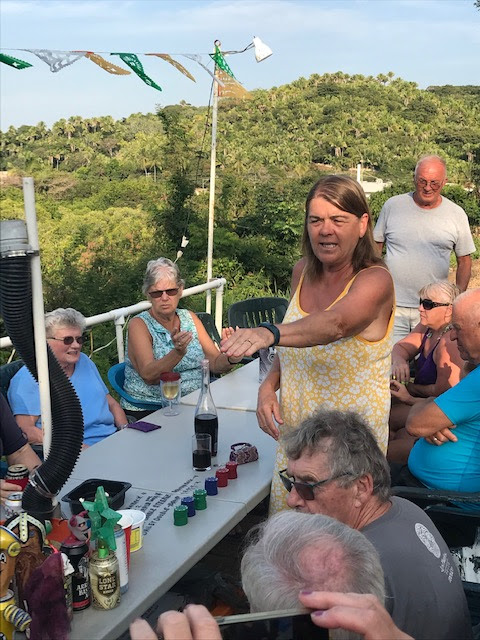 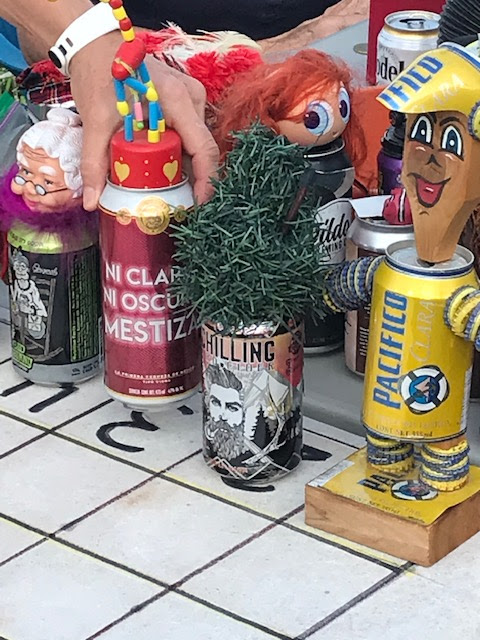 After the races Pat and Harold accompanied us downtown for supper and to watch a parade they were having for Carnival.  We went to a little true Mexican restaurant and absolutely loved it.  Before we went in at about 6 we asked when the parade started.  They told us right away, but that we could have supper first.  We splurged and had a couple tacos and some enchilada's which were excellent. 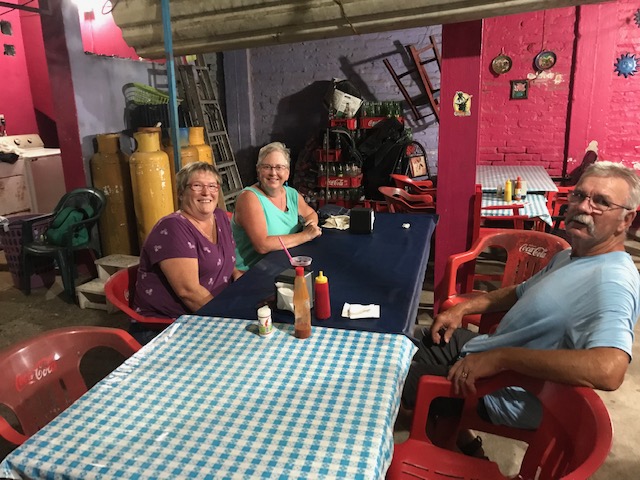 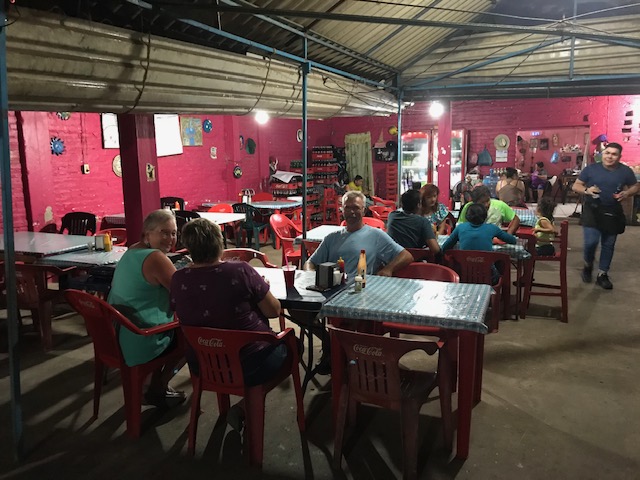 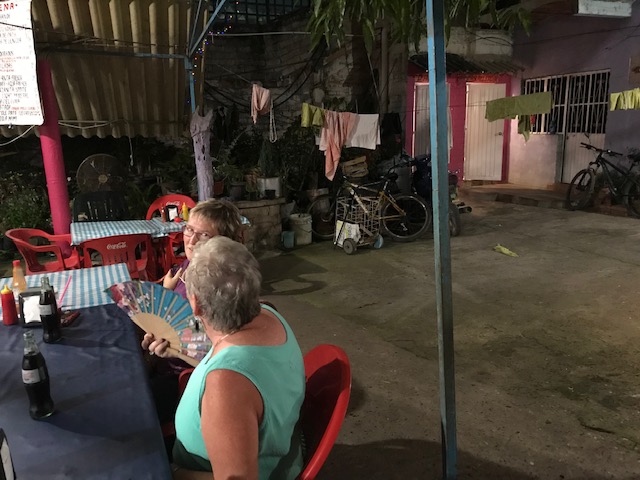 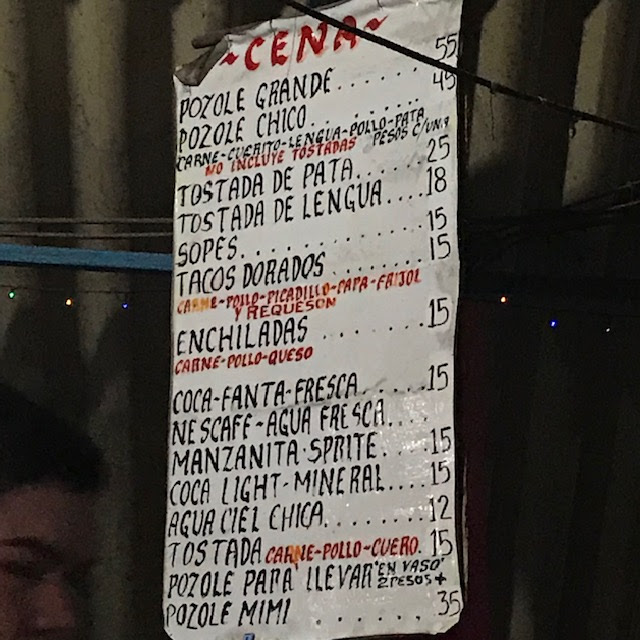 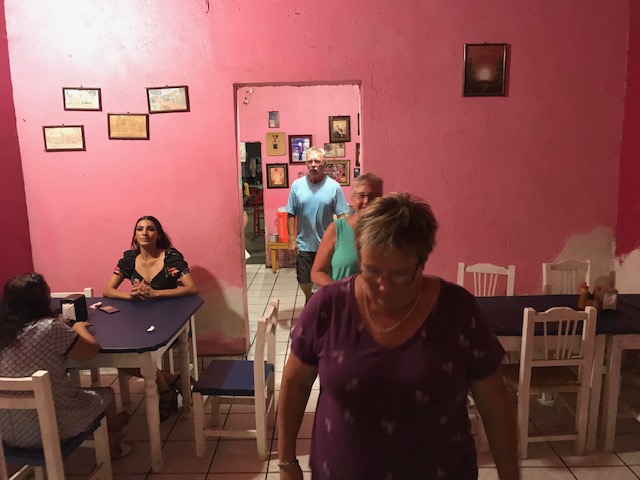 So we went and found a place on the street to sit for a while.  We asked them there what time the parade started and they said 7:30.  So we sat and chatted for a while. 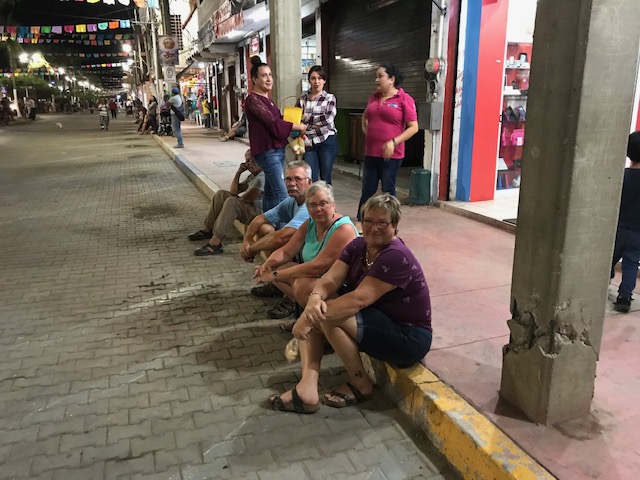 This cute little girl came along and smiled us out of a few peso's for a school project of some kind.  Then she wouldn't leave!! lol 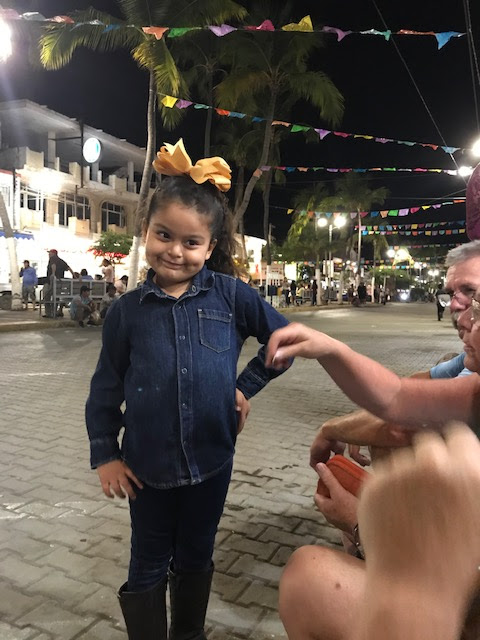 Finally about 7:45 the parade started.  A policia escort with  a band first with the Carnival princesses leading the parade. 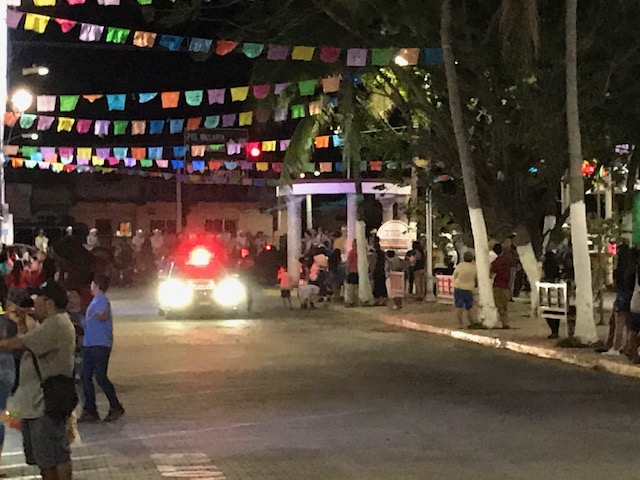 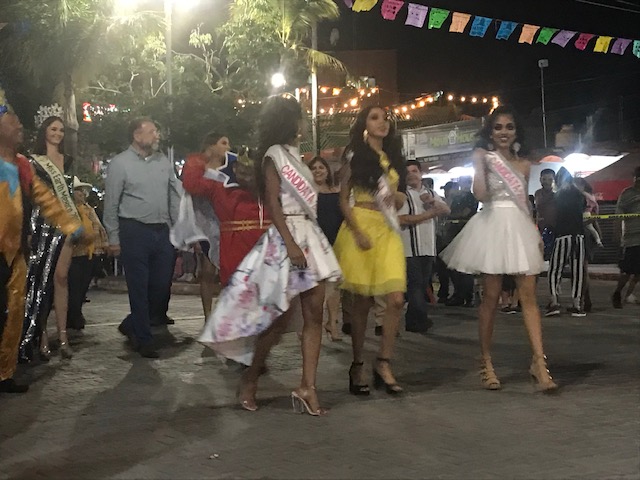 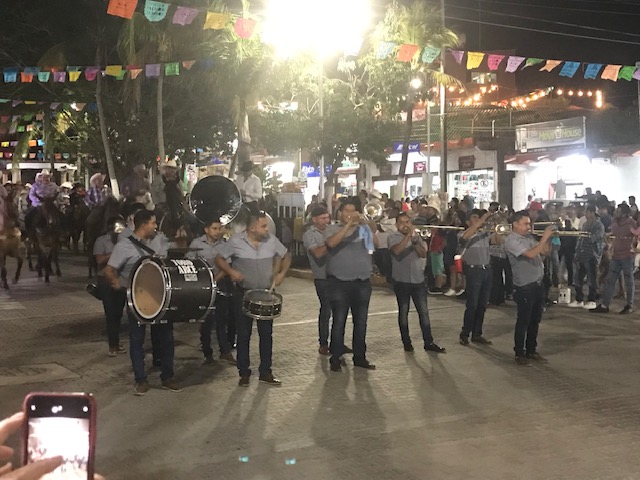 Then a bunch of dancing horses.  We didn't really see much for dancing but they did look good. 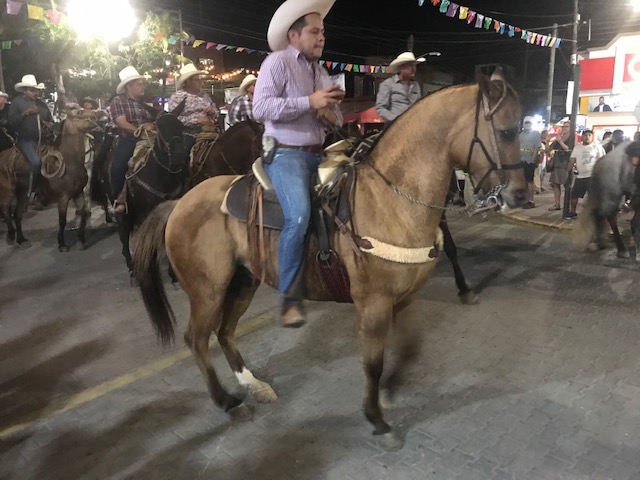 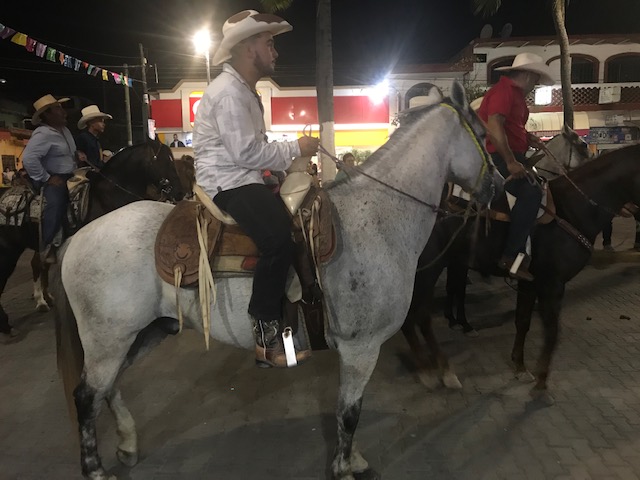 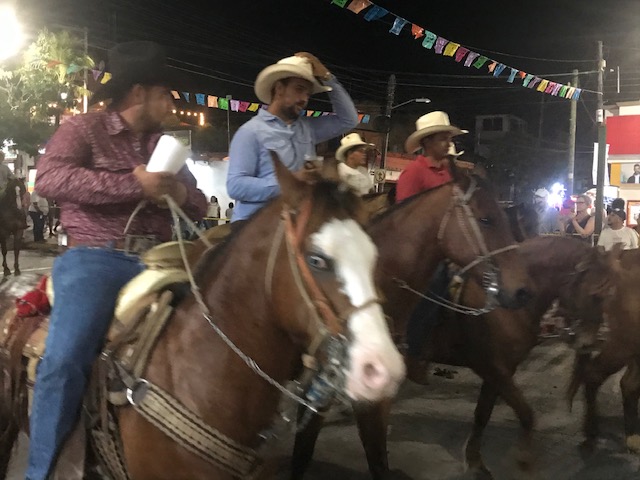 Another band and it was over!!!  Pretty short parade but it was to introduce the Carnival princesses.  The Carnival will be in town for the next 5 days and there is another bigger parade on Tuesday apparently. (We were told later that if we had of gone to El Centro, the dancing horses performed for a long time.  Sorry we missed it.)   Anyway we headed home because it was after 8 already and La Penita RV Park midnight is 9 pm!!

When we got back to the park the music jam was still going so I went over to take in a bit of the music.  Not a bad way to end an evening.  Hope your day was great. 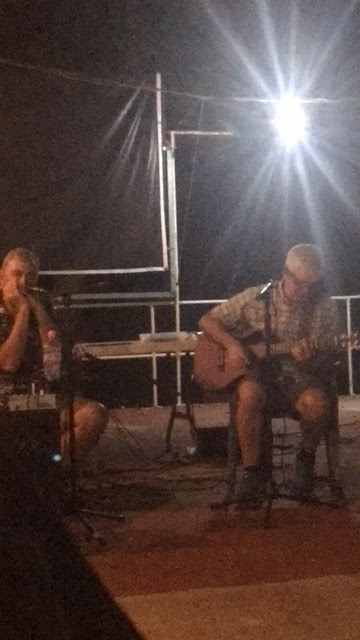