Valentines Day in Mexico is celebrated with joy and enthusiasm.  February 14 is celebrated as El Dia de San Valentin, but it's more commonly referred to as El Dia del Amor y la Amistad, the "day of love and friendship"!  That means if you want to celebrate like a Mexican, you shouldn't just focus all your attention on your beloved, but rather on your friends and family too!  I think I like that interpretation. 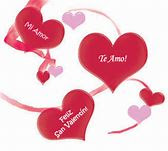 Another wonderful morning so I just took my time getting my morning chores done.  Guess what happened at 2 minutes to 10??   Yesssss the mechanic and his helper showed up to do my oil change.  In no time flat they had the oil drained and the filter off and not a drop spilled on the ground.  I was so surprised that I didn't get a picture of the guys at all.  One of the reasons it was so fast is because the back end of the motorhome is over a hill and the guys can practically walk under the back end so there was no crawling around in the dirt. 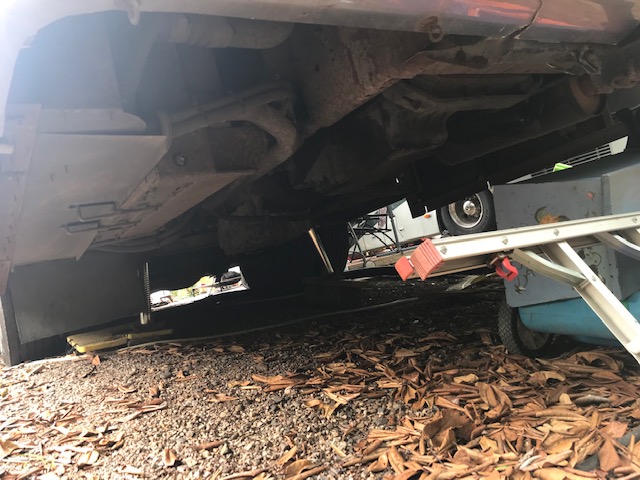 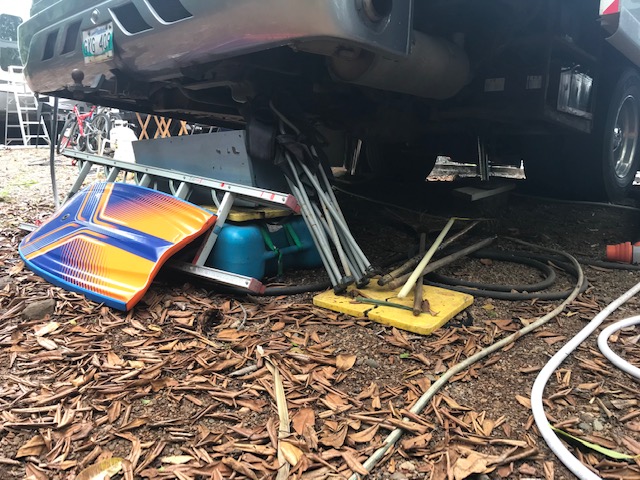 Then it was time to replace the oil.  Guess what?  After I told them it would take over 20 liters of oil they only brought 2 - 5 liter jugs of oil!   Ooops I guess we better get more.  On the phone to the boss, they don't have more oil anywhere.  Have to get from Compostela which is 20 or 30 miles up the road.  Ok no problem.  So off they went to get more oil!!!   The mechanic was firm when he said "NO START!"  Ok I will no start!!! 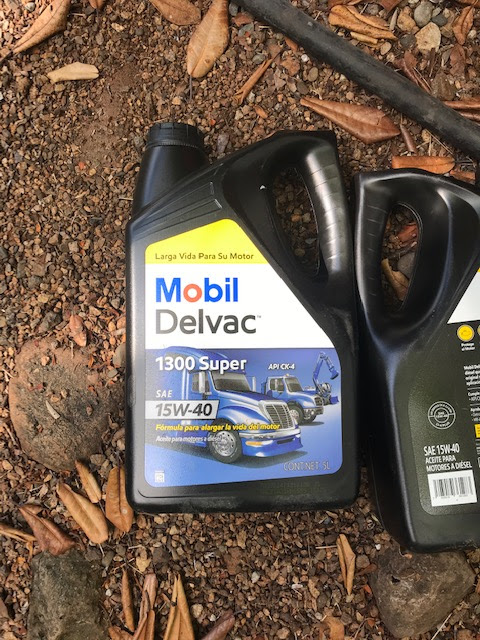 They came back in about an hour with 2 more jugs of oil which filled it to the add line.  Lucky I had another 5 liter jug to top it up with!!!  Oh well the job got done.  And looking back I realized that they did charge me for my jug of oil in the end!! lol  No tip for them!!  He was adamant that he will find me an antifreeze overflow tank somewhere so I sent him off on that hunt.  How long will that take??? 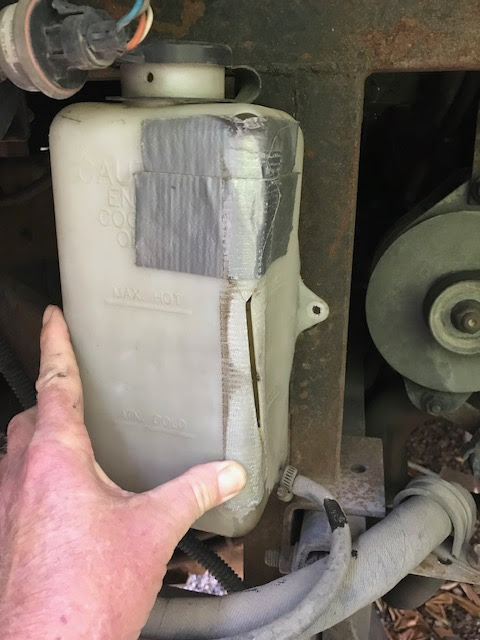 One of the highlight events of the park is the annual pig roast.  It used to be a full fledged pig roast but has been sized down to just a pork supper.  The big part of the event is the theme that is set a year in advance so people have lots of time to get costumes to wear.  This years theme was Day of the Dead which is a Mexican celebration normally held around the end of October.  The Mexican people go to great lengths to honour their dead and some of the tradition is to scare off evil spirits as well.
Judy is our decorator supreme and she did a wonderful job of setting up the memorial and invited all of us to bring pictures of our loved ones who have gone on before us.  We proudly placed a picture of our Grandson Clayton who is in heaven. 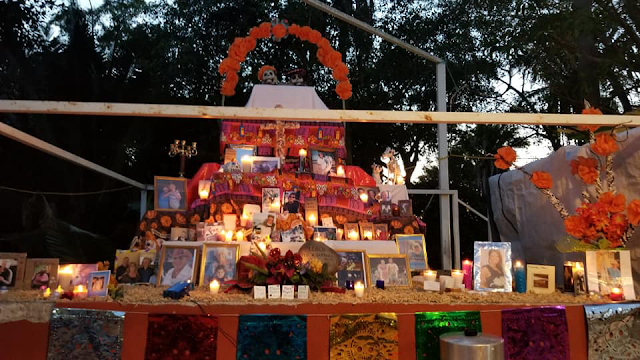 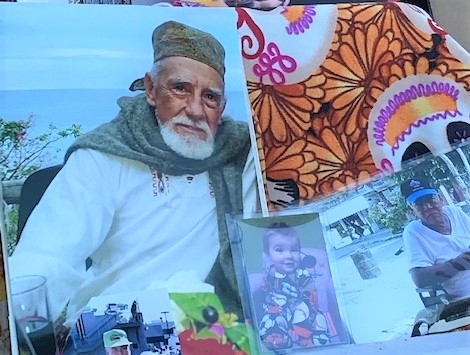 When I first heard of this as the theme, I thought maybe a feeble attempt at a costume would be about it, but boy was I wrong!!!  The park residents came out in droves with some of the most amazing costumes I have seen.  Good job everyone!!  I will share some pictures starting with Pat and Harold  who greeted us at the door!  Most of the newbies didn't have the opportunity to dress up because we didn't have all year to get our costume together, but we were all part of the celebration anyway! 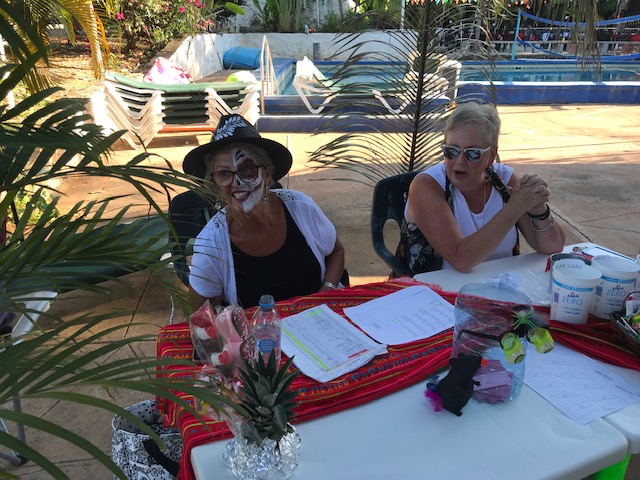 And Sue and I were a couple more of the newbies.  Sue had scrambled and got a couple masks off Amazon so we were a bit covered!!  We are not really sad but the masks make us look that way!!  Sue kept smiling at people and they wouldn't smile back and she couldn't figure it out for the longest time!! 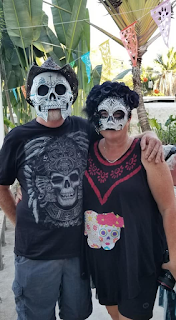 Sue also volunteered to be the portrait photographer for the event.  She took posed pictures of couples which she will touch up and give them as keepsakes. 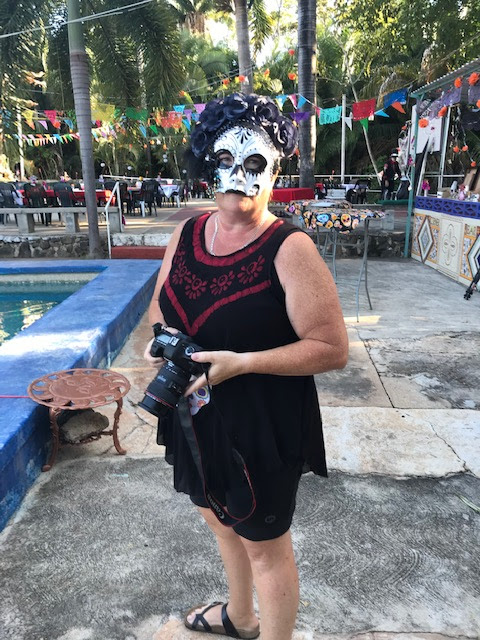 Here are some of the other costumes lots of which were spectacular. 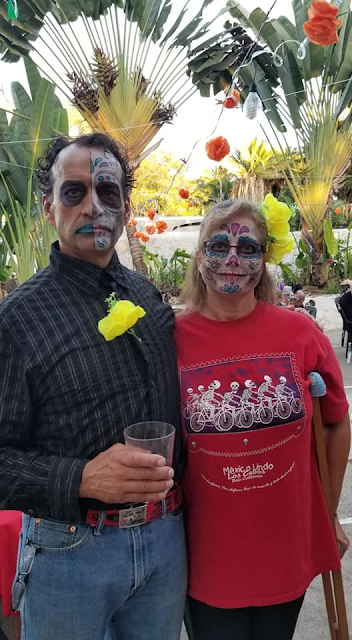 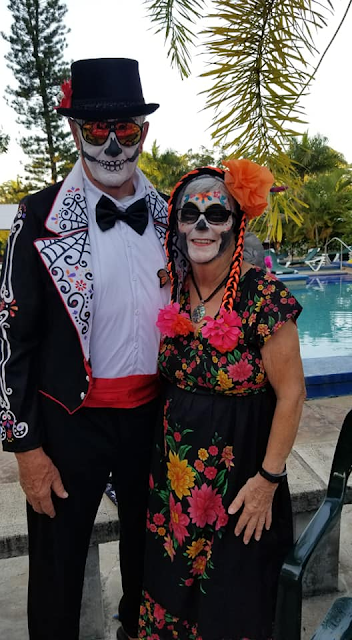 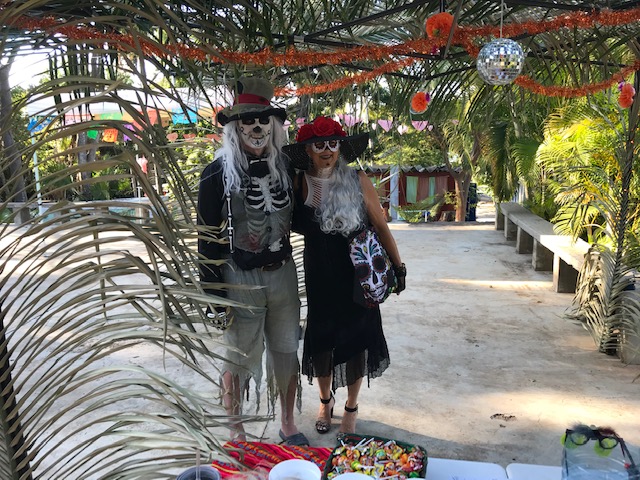 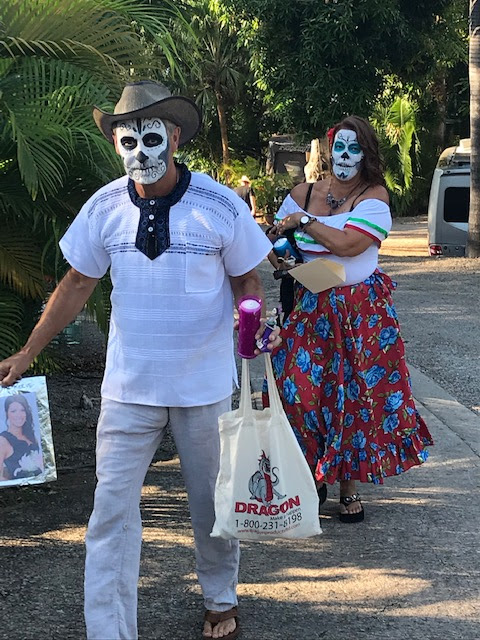 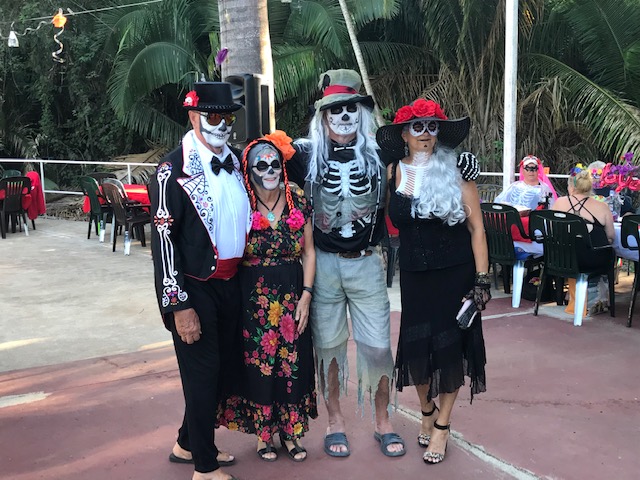 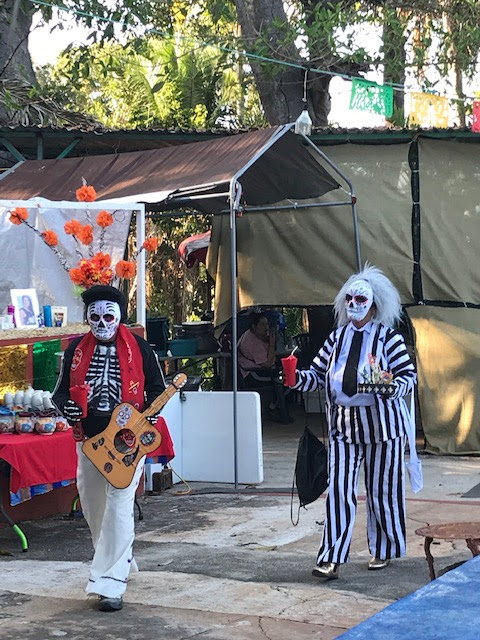 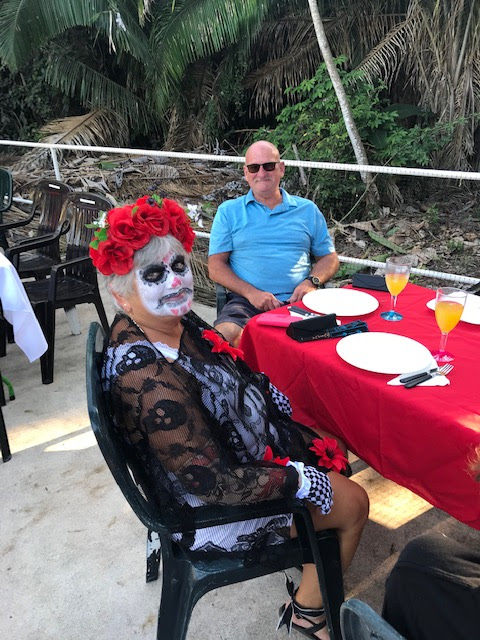 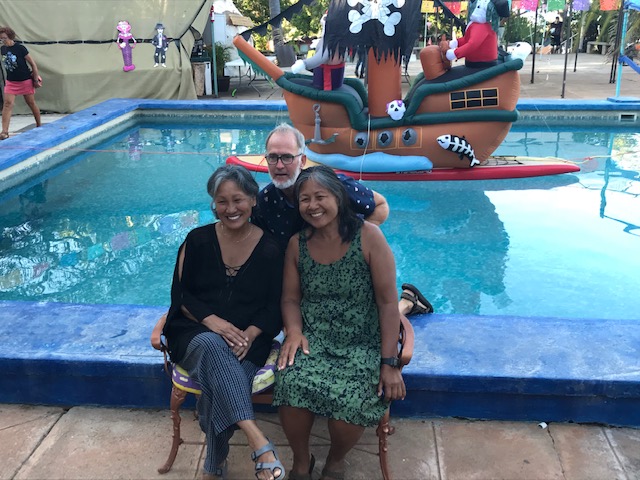 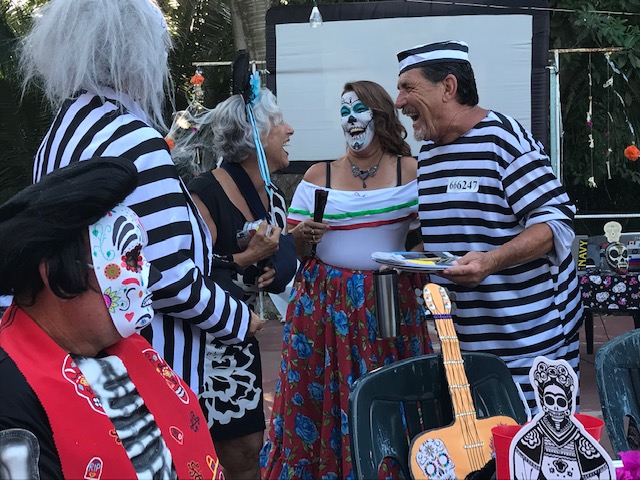 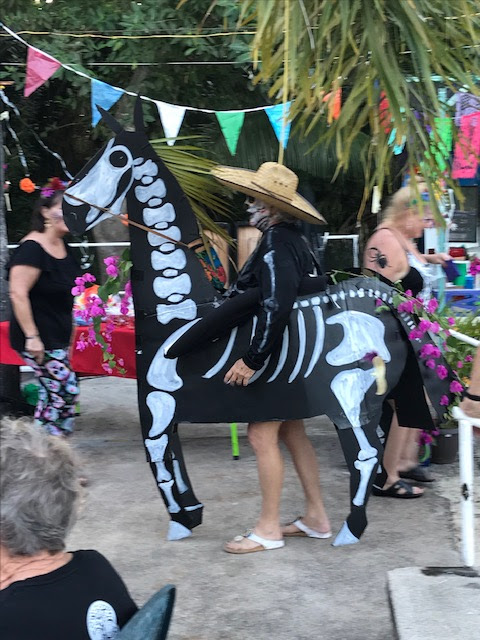 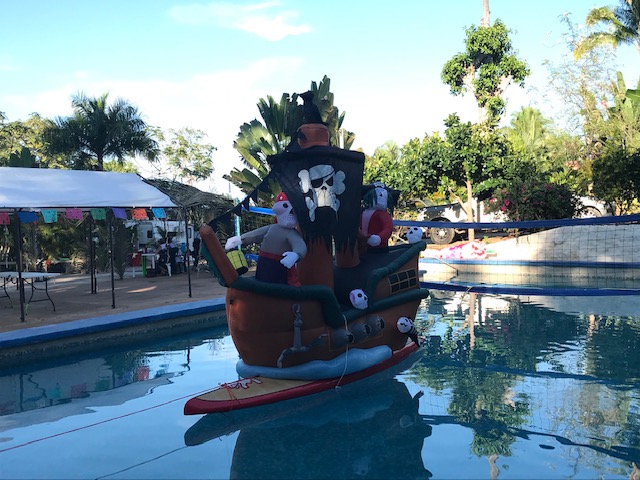 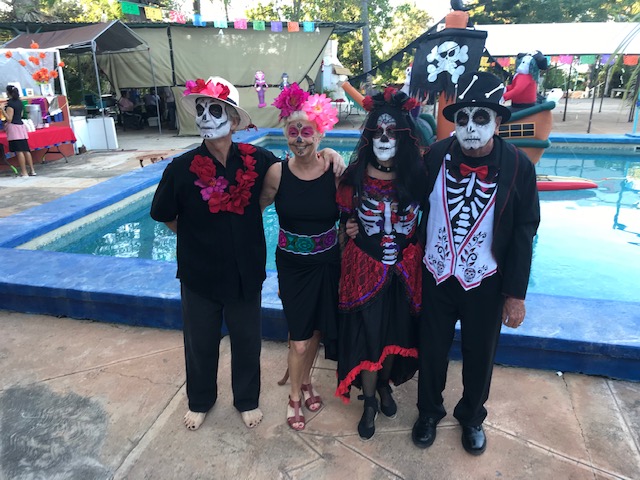 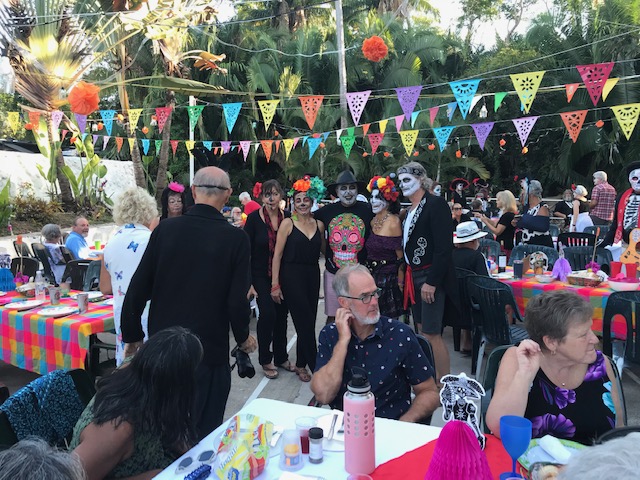 As usual Cecies crew did an awesome job and of course Kenia was there with her yummy cakes. 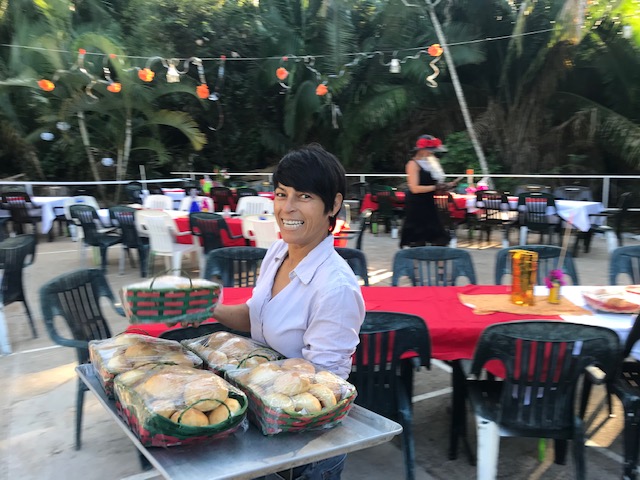 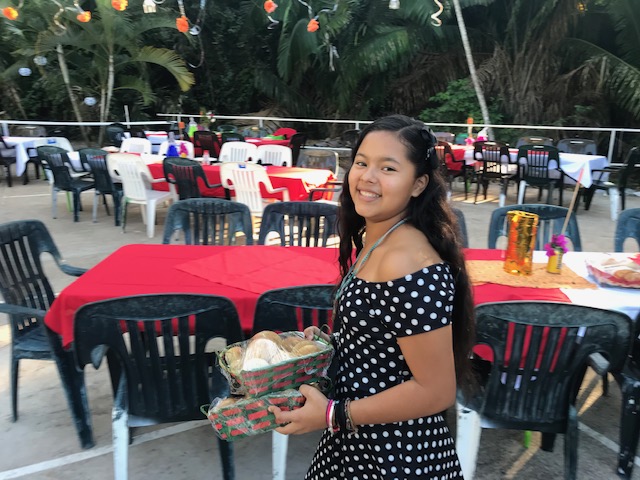 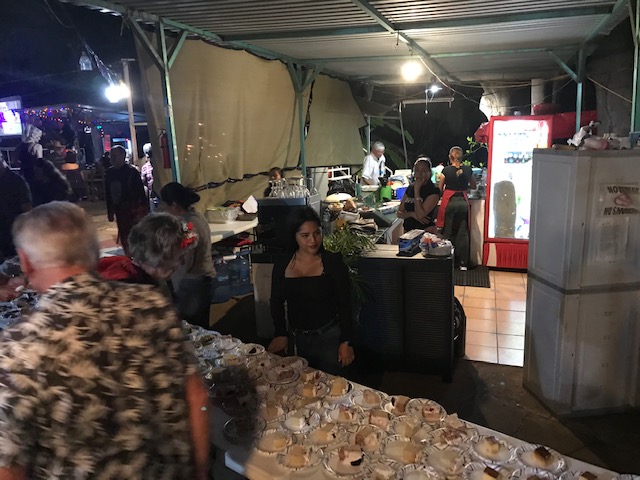 Jolynn and Brian were in charge of this event and just like all the other ones they look after, they did an awesome job!!  Although they were in charge, there was a great troop of volunteers that made it all happen.  What a great bunch of people in this park.  They even had a pile of door prizes!!

One of the funny things about this party where everyone paints their face is how many people were having problems accessing their cell phones!!  Why you ask!!  Well a lot of them have face recognition and the phones wouldn't recognize them!!  They were frantically trying to remember their passwords which they hardly ever use.  Too funny!!

Joe carried the party on till well after La Penita midnight (8:30 pm) spinning the tunes.  Everyone had a super time and went away with smiles on their faces.  Hope your day was great as well.
Posted by Lorne Green (A Place Called Away) at 16:05:00
Email ThisBlogThis!Share to TwitterShare to FacebookShare to Pinterest