We spent a lot of the day today doing what retired snowbirds do....nothing.  The weather is warm and the chairs are comfy.  The only bad thing is the continuous sound of traffic and sirens and loud motors.  Otherwise it is a nice park but because of the noise we could not last long here.  We are looking forward to going back to the beach where only the sound of the waves is heard. 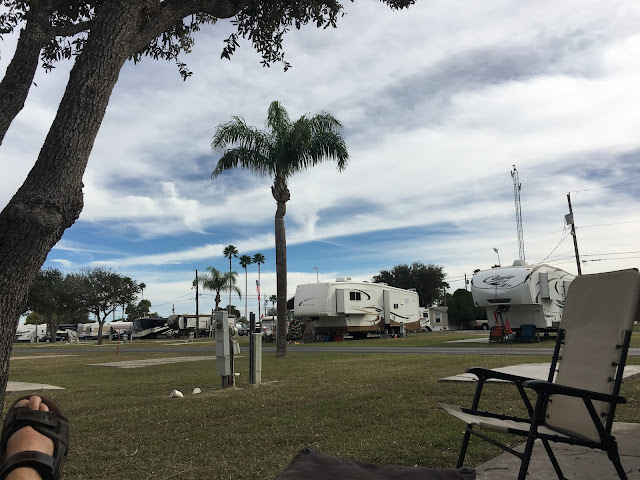 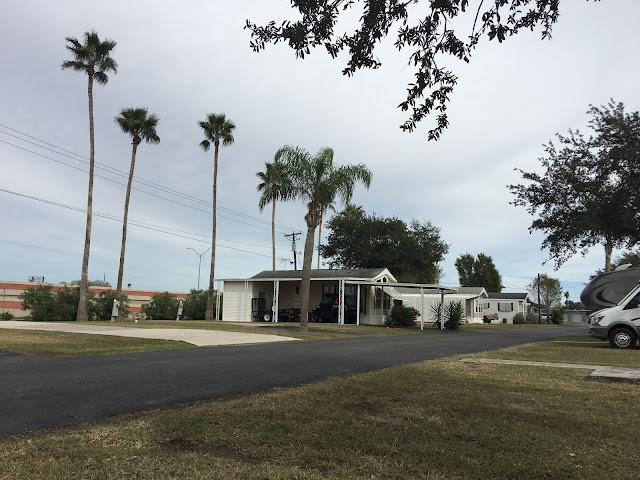 We decided to head out to a festival of lights in the town of Hidalgo.  Its about 35 miles down the road and apparently the festival is worth going to see.  On the way we decided we should have supper so we stopped at a Whataburger.  These burger joints are everywhere, but we have never tried one so today was the day to do it. 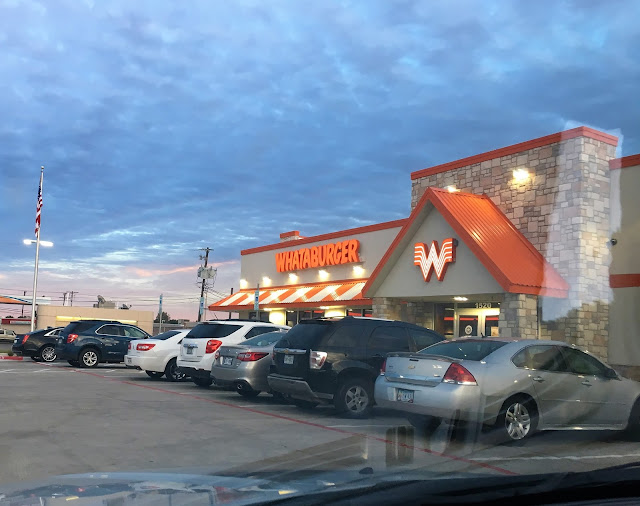 Sue had a double burger and I had a patty melt and they were both delicious.  Their onion rings were really tasty too and seniors get a free drink!!  Winner winner chicken dinner!!!! 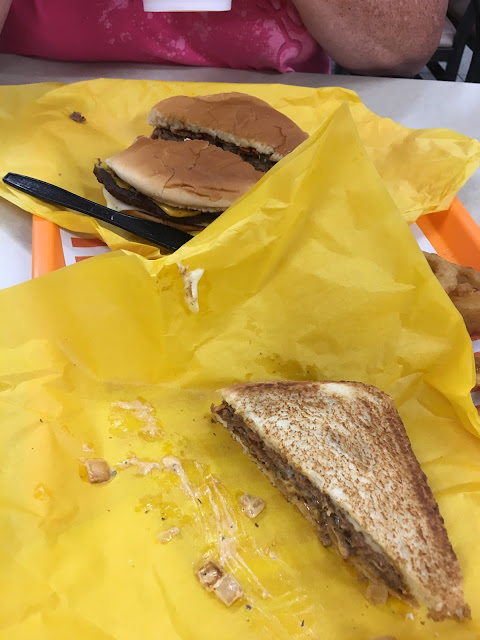 We continued on to get to the Festival before it was too late. They have a stage show but we wanted to take the trolley tour so we missed most of it.  I took a bunch of pictures so here they are. 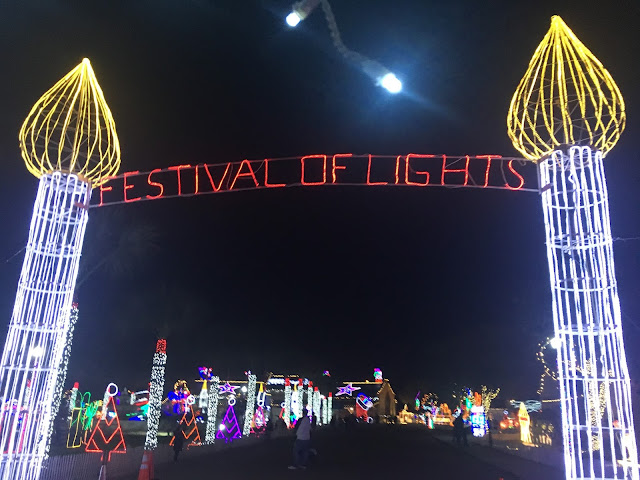 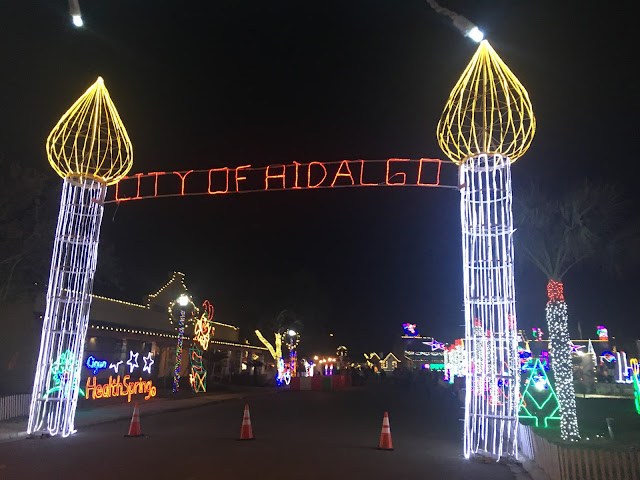 Every town has its claim to fame and Hidalgo is known for the largest killer bee.  Here is the story.

Killer Bees have been around since the 1950s, when some African queens escaped a South American lab and began flirting with the local gentry. Their volatile spawn migrated north, growing nastier with each succeeding generation. In October of 1990, they illegally crossed the US border at Hidalgo, Texas. Most towns would view this occasion with horror, something best left unmentioned in the hope that it would be forgotten. Happily, Hidalgo was blessed with a mayor who knew that killer bees bring honey as well as a sting. John Franz gave the media the buzz: Hidalgo was "Killer Bee Capital of the World" and proud of it. Within two years Franz had wheedled 20 grand from his city's budget to build the World's Largest Killer Bee. 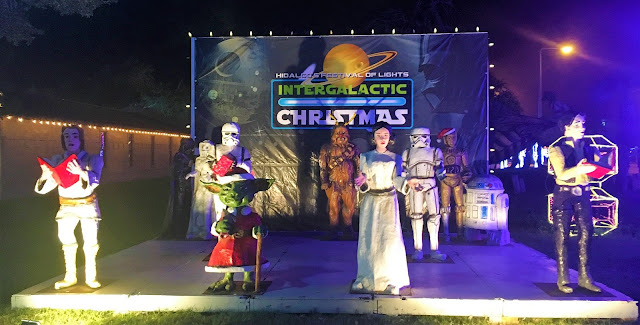 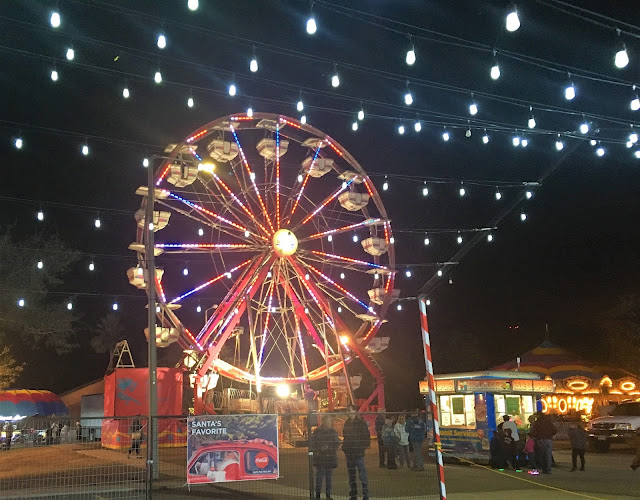 We jumped on the trolley for a 45 minute guided tour.  They were quite good at explaining what all the decorations were about. 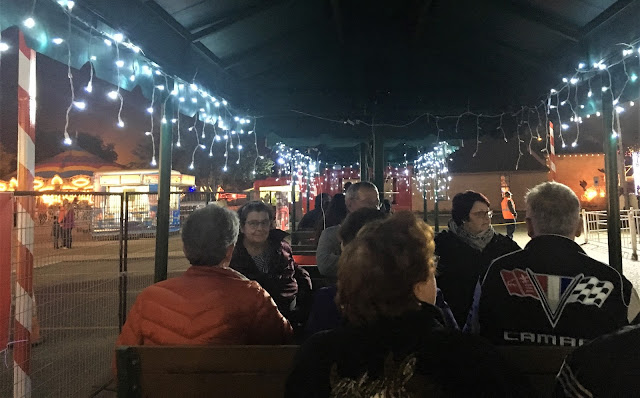 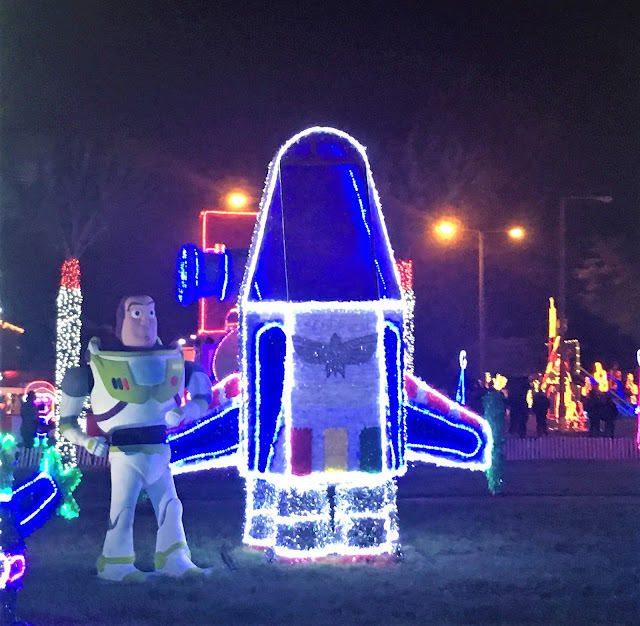 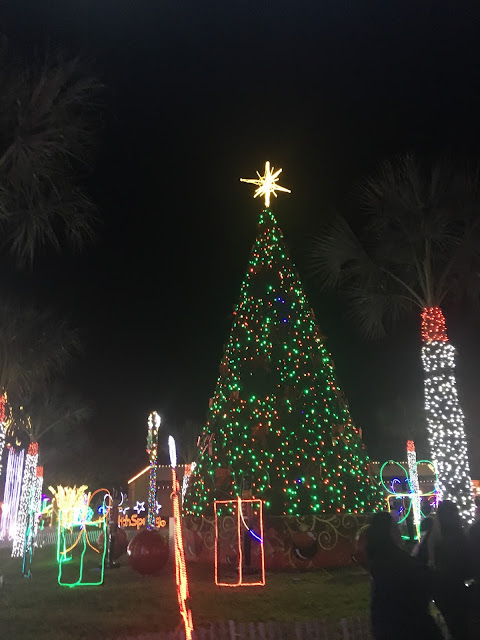 This is the house of Ramon Ayala who is known as the King of the Accordion.  He is a well known Latin performer and his house is right across from City Hall where the festival is based.  His children live in houses surrounding him and they are all lit up.   Ramon is the founder of the Festival of Lights and still gives out up to 2000 presents to less fortunate kids.  One year he gave away 2000 bikes!!!  He is the spirit of Christmas in Hidalgo. 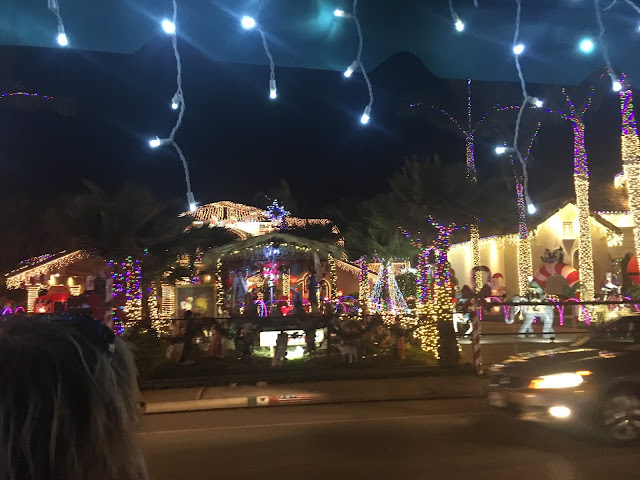 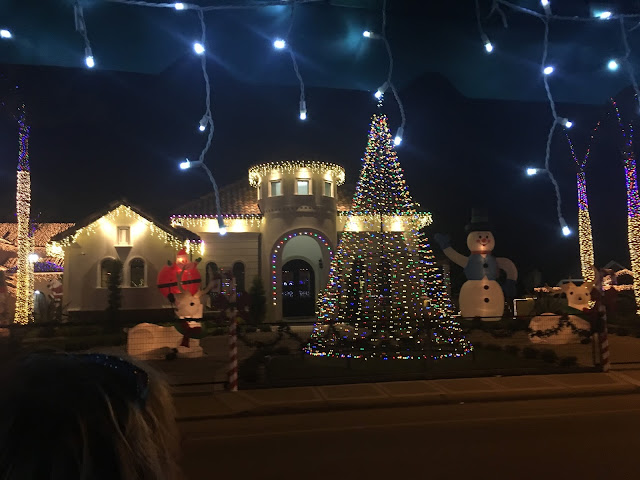 There were lots of theme areas from super heros to historic landmarks. 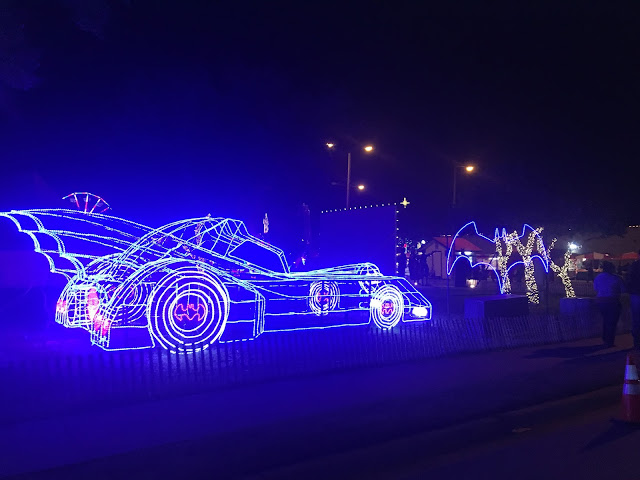 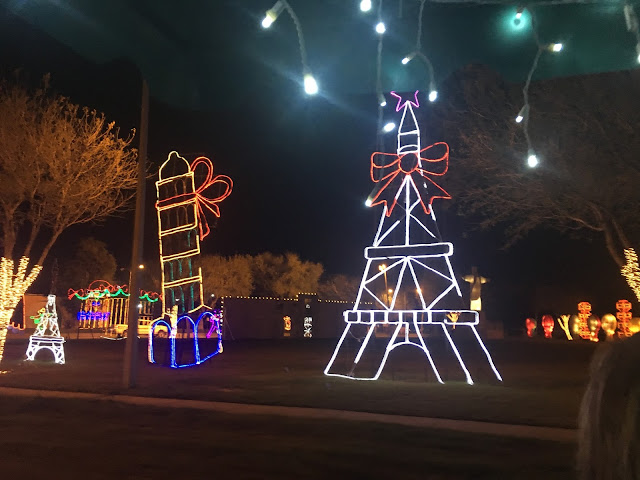 On December 16 and 23 they have a snow day at the school.  They get a machine and make a big bunch of snow for the kids to play in.  It is quite a hit apparently. 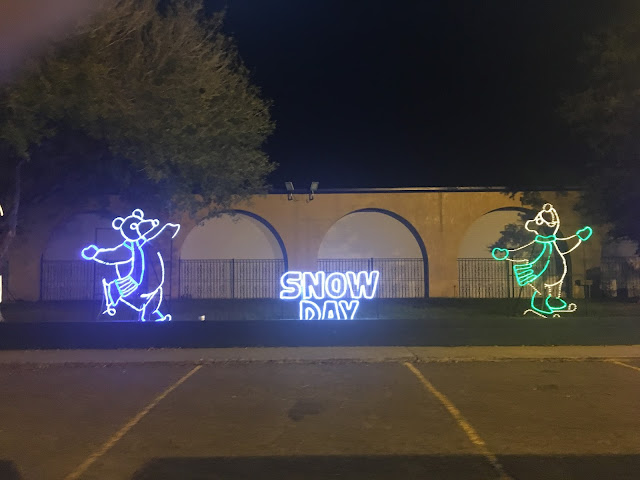 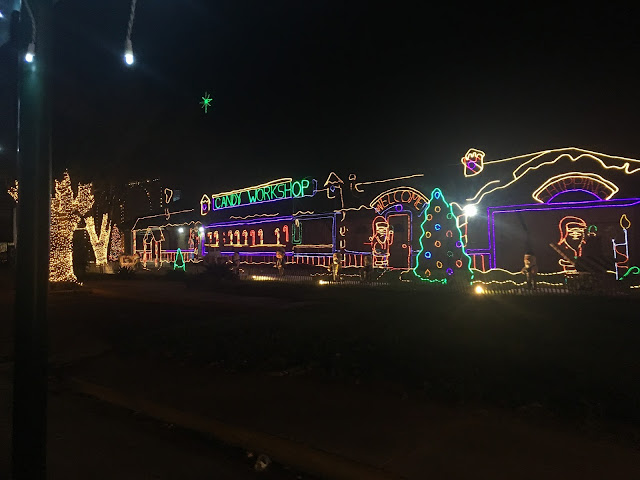 London Bridge is in Hidalgo as well as Lake Havasu. 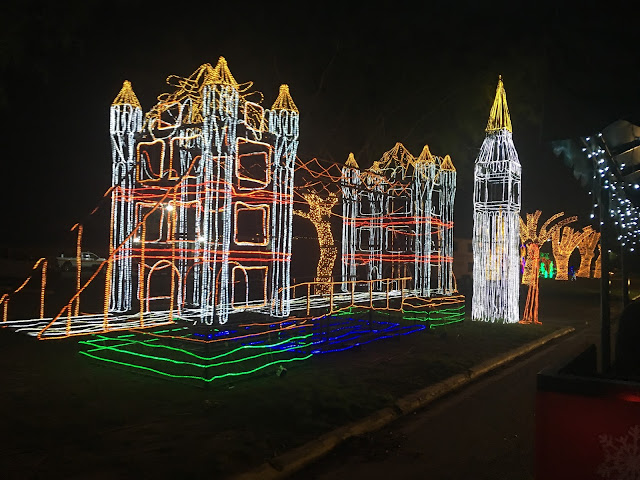 I always thought it would be neat to make one of these into a Motor Home. 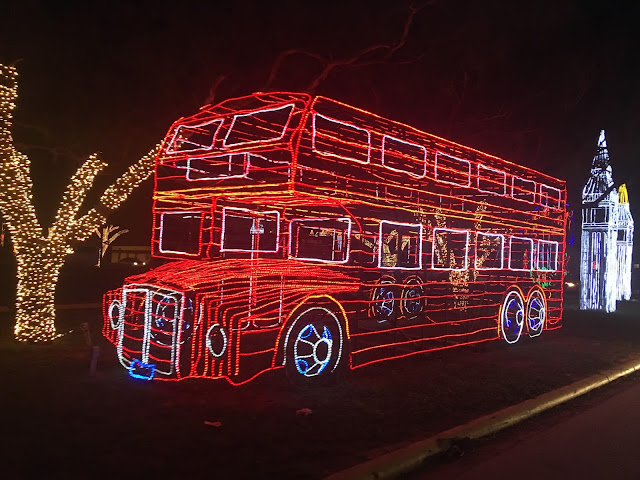 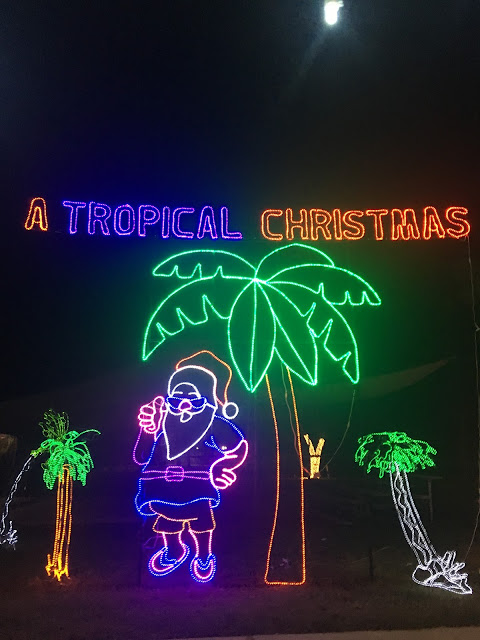 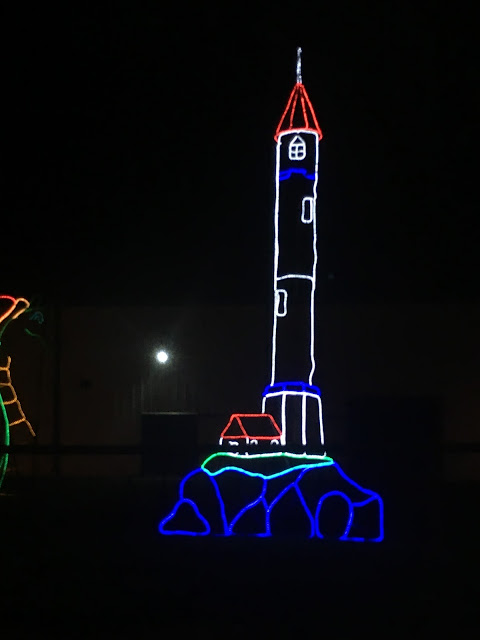 Houston is not that far away and is mission control for all of the manned rockets that were sent into orbit like John Glenn or the moon missions.  Famous words were always, "Houston, we have lift off" 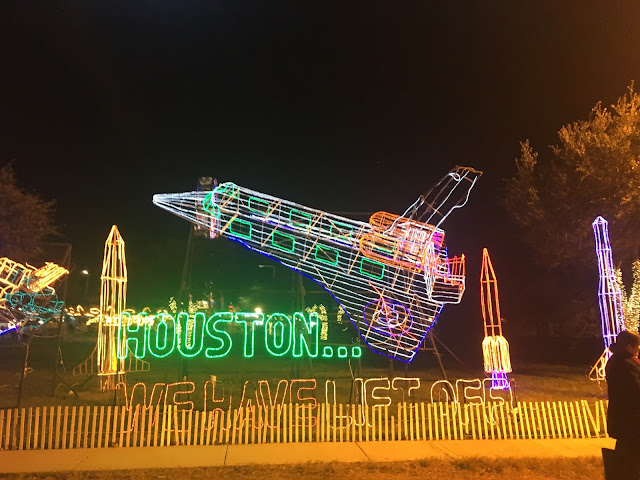 I don't have a view for you tonight but here's where we are tonight.

Posted by Lorne Green (A Place Called Away) at 17:46:00
Email ThisBlogThis!Share to TwitterShare to FacebookShare to Pinterest