Moving farther south to ride out the cold front.

We decided it was time to venture farther south to explore some of the area where we are going to meet Pat and Harold in January.  So we decided to head for Harlingen Texas which is just outside Brownsville.  As a point of interest, Harlingen has a population of 65000 people and boasts the lowest cost of living in the United States!!!   It's in an area they call "The Valley" but I haven't witnessed a valley of any kind around here.  We were at sea level when we left Magnolia Beach and we are at sea level here so there wasn't a lot of up and down going on in our travels.
The other reason to move was that the weather is going to turn cool and wet for a while so we want to get in a park somewhere and plug in to power to stay warm.

We didn't get a very early start and it was about 11 am when we said goodbye to our friends Chuck and Angela, who were heading out today too on their way to San Antonio Texas.  See you later!! Charlie had to go for his last roll in the sand before we left.  He finds a dead fish on the beach and rolls in it quite often.  Makes for some interesting smells. 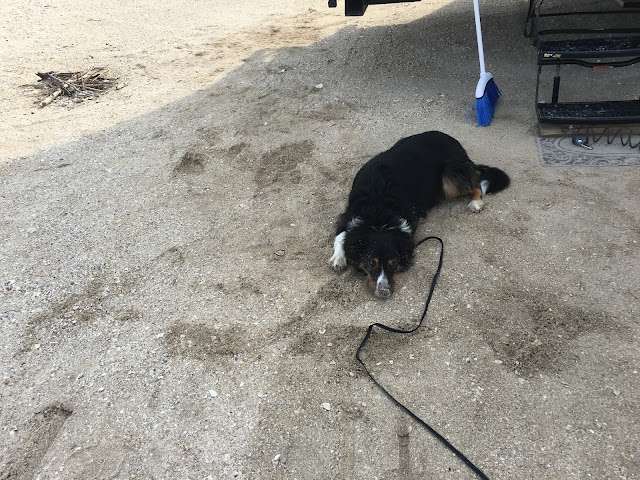 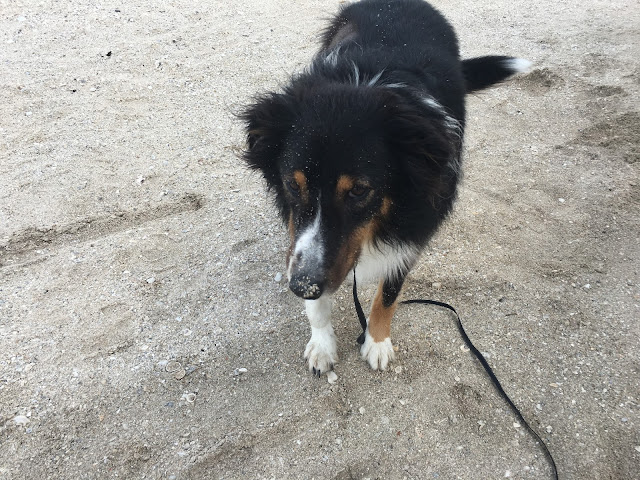 The beach will look awfully bare without us there.  We will be back! 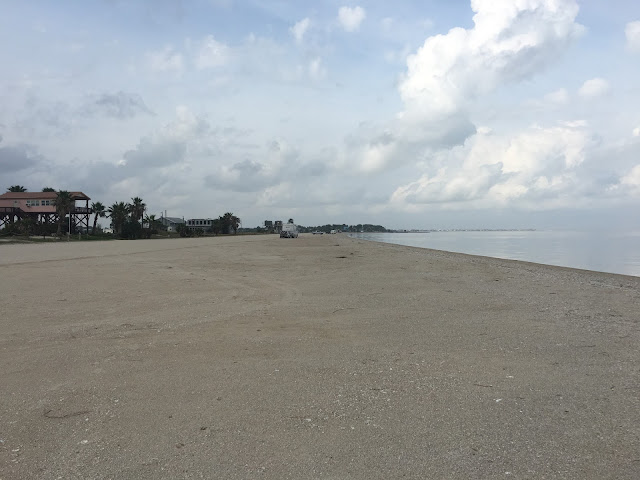 On our way out of town I just caught a glimpse of a field full of snow geese.  I guess these beautiful birds are why we got the nick name Snowbirds.  There have been lots of them around here in the last couple weeks.

Once we got down the road about 50 miles we passed an area where the power poles had all been replaced after being blown down by Hurricane Harvey.  This area apparently had high winds and the ground is already sort of soggy so the old poles got blown over.  They are all new poles now and you will notice how close together they are.  I imagine this would cut down on the wires whipping in the wind and taking out the poles. 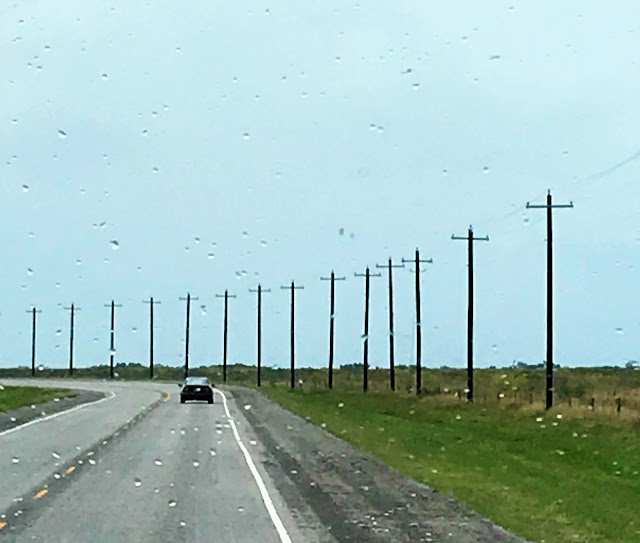 As we were going around Rockport on the bypass we started to see lots of rubble piled beside the highway.  Every house and yard had a pile as they tried to clean up the mess from the storm. 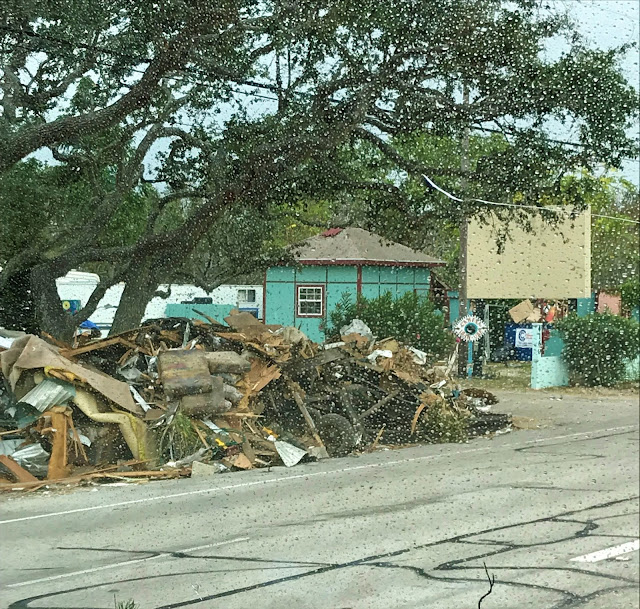 Further down the road, the center median which was 200 yards wide, was piled high with sorted rubble.  Metal in some areas, garbage in others, and wood and trees and burnables in others.  We didn't realize it soon enough for a picture, but they had a half a dozen huge incinerators burning and there wasn't even a single wisp of smoke from them.  We will get a picture on the way back through here. 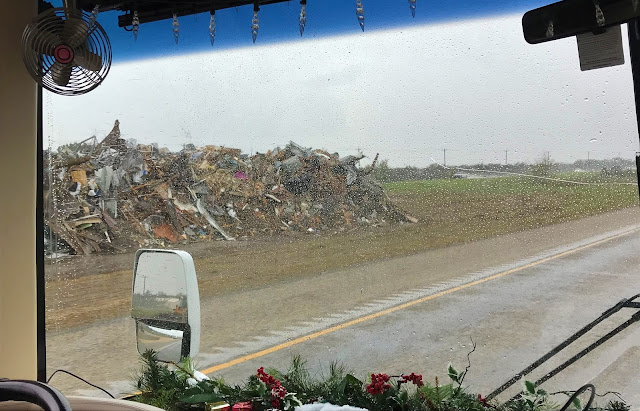 Further up the road the piles were high and wide and ran for 3 or 4 miles.  Hard to think of the amount of waste generated from the hurricane.  And there is still lots left to pick up everywhere.

As we got a little closer to Brownsville, some palm trees started to show up and things were not blown around as much. 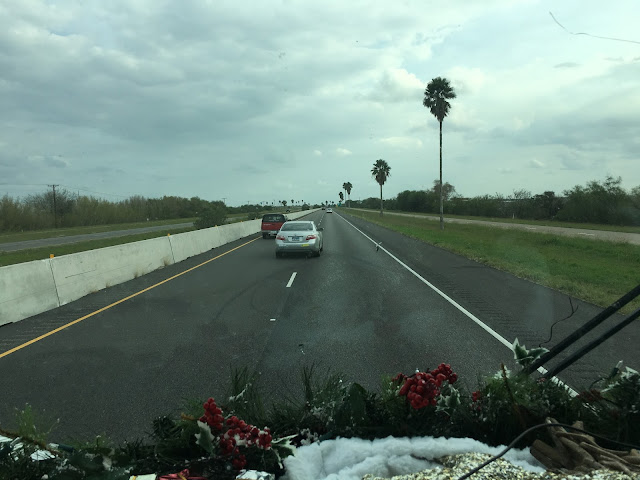 We needed some supplies so went in to ask permission to park in the lot and get the supplies.  The lady at customer service said we love to have RVers stay here because you all spend money in our store.  At least they get it.  We have yet to find a Walmart that does not allow overnight parking.

Later at night when I took Charlie for a walk we spotted these vehicles, I'm assuming bound for Mexico.  I think they were parked there for the night.

Can you see the smart car loaded on the little Toyota truck?  Now to do that they had to remove the box from the red Toyota and load it on the other little blue truck.  And the insides of the cars are all jammed full of extra spare parts of all sorts.  I'm wondering just how legal this is, but we saw a couple more setups the same on the road today so they must be following the law.

This evening was absolutely gorgeous outside, but you could tell that something was going to happen because all the birds were huddled in the trees and making a terrible noise. Charlie doesn't like the sound and has been on edge all evening. 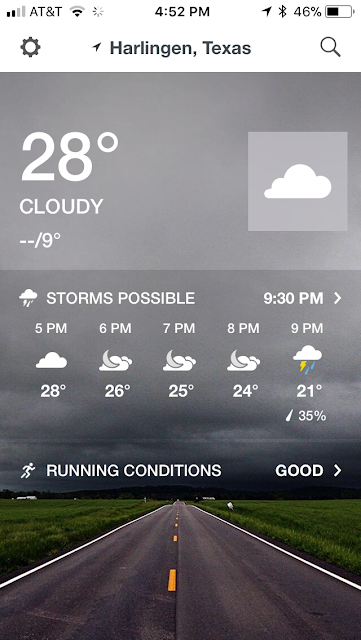 Here is the view from our window tonight: 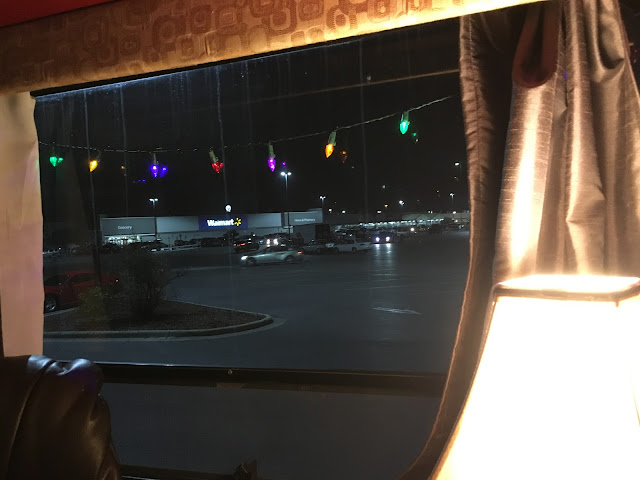 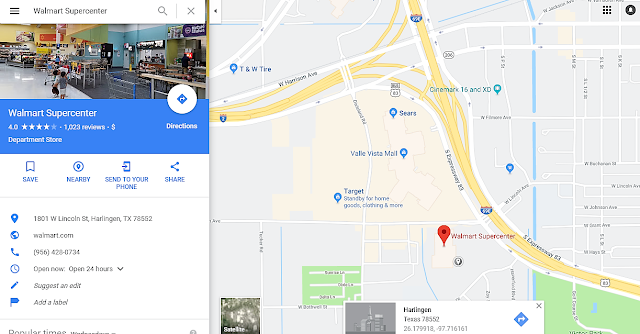 Posted by Lorne Green (A Place Called Away) at 17:50:00
Email ThisBlogThis!Share to TwitterShare to FacebookShare to Pinterest