RV Chat room is the place to be.

I want to do a little promotion for a chat site that I visit as often as possible.  It used to be the RV Dreamers chat site which was run and funded by Howard and Linda Payne.  These are the people that go around doing seminars on everything RV.  For years they have hosted a chat site on their page and a group of us have been going there each evening for a long time.  It was a place to talk about RVing and get some support from others on different issues.  It is a lot like reading a blog but way more personal. Over the years almost all of us have met in person somewhere in North America and it has been a platform for making friends from all over the continent.  For instance, I met Rowdy and Missy on chat a few years ago and we went through the "should we go full time" dilemma. We both retired about the same time and both went through the process of selling our houses.  We have become quite good friends, but we had never met them until this year.  If you have read our blog you know we spent the best part of a month living in the desert with them as they tried out dry camping.  We spent some time with Dee and Jim this winter, who we met on chat as well as Anna, Lessie and Ed and many more.  Any way about a week ago Howard decided our group was not worth supporting anymore and cancelled the chat room without even telling anyone.  (Most chatters have at some point donated to it, or attended his seminars or bought product from his Amazon site).  Thank you very much Mr. Payne for kicking us to the curb.  Anyway one of our chatters took it upon herself to set up our very own chat room and fund it herself so that our friendships would carry on through chat.  We are now hoping to attract more chatters to the site, so I am inviting anyone who would like to investigate it, to go to her blog "Tumbleweed" and click on the "Chat" button on the right side.  Someone is usually there starting about 8:30 EST.  You need to make up a name for yourself, either your own name or a fictitious one, and add your location to the end of it.  For instance mine is "Boo-Holtville CA.  If you don't see me there just mention that Boo sent you and they will give you the big welcome. There is no sign up or any obligation to stick around, but try it out once to see what you think.  I may even be there.


Now for the blog.  We kind of felt like a diesel engine on a cold morning trying to start with no glow plugs.  We just didn't want to get going.  When we finally did, it was a beautiful morning for coffee on the deck with P&H. 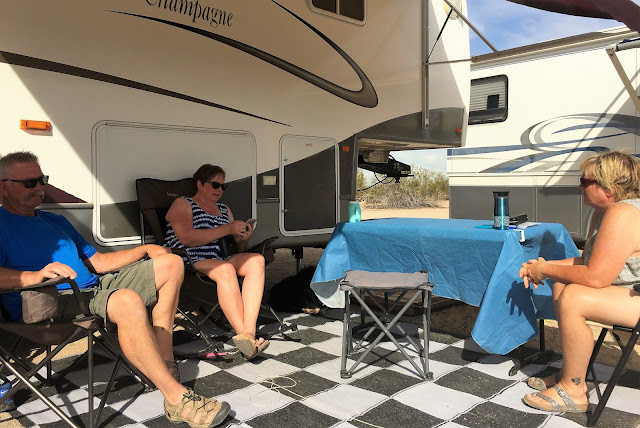 As we were sitting there, we saw a truck and 5er pull up beside us and stop.  It was Rick and Kathy who write the blog Its about time.  They were all packed up and heading to Nilan California which is up by Slab City.  We had a nice chat with them before they headed off on their journey. 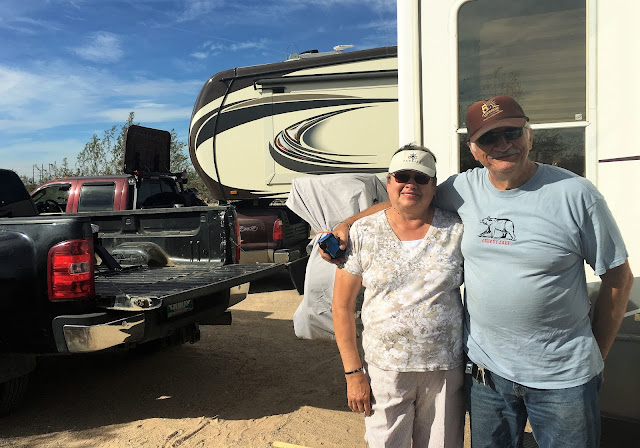 After coffee the girls went shopping and Harold and I went for a drive.  We headed out south through the desert until we found a highway just on the north side of the Mexican border.  Apparently there is sometimes some illegal drug running in these parts so we didn't want to get stopped and questioned by the border patrol.  We also remembered that we didn't have our passports with us which was a little bit dumb of us but we made it back to tell the story. 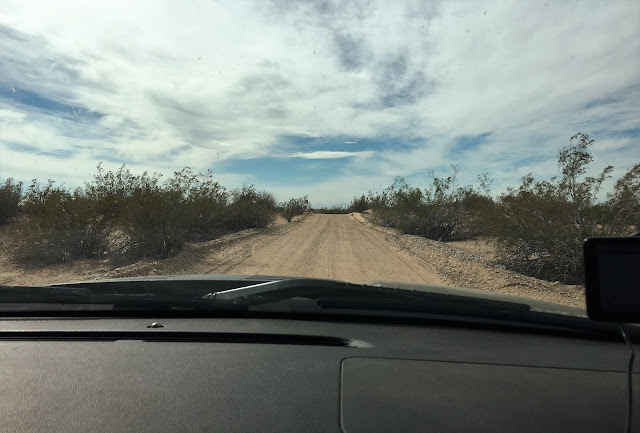 We decided to turn right, not left at this intersection,

However we did question what all the truck traffic was about.  I would imagine there is lots of produce moving north from Mexico at this time of year.

We checked out all of the irrigation around and found that they are growing mainly carrots, cabbage, lettuce, sugar beets, celery and alfalfa around here using lots of water to help it along.  We talked briefly to this gentleman who told us a bit about how the irrigation works but Harold's Spanish was lacking a bit. 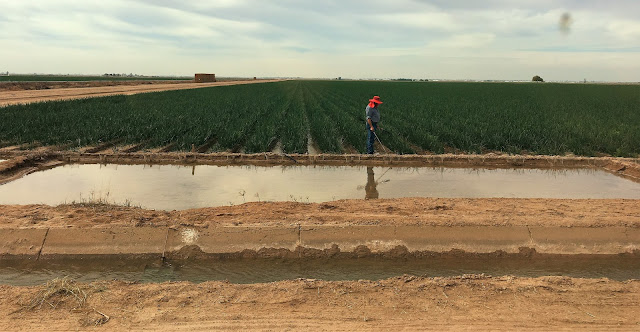 We saw lots of cattle operations and you could drive right  beside them on a paved road.  We haven't talked to anyone about this industry yet so can't tell you much about it. 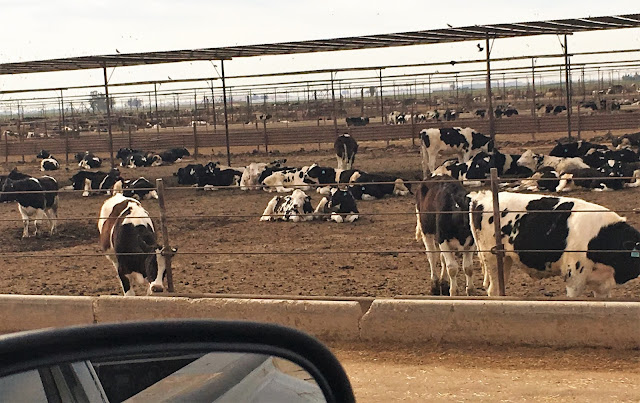 On our way home we passed this field of irrigated sheep.  Well I guess maybe they are not irrigated but they are certainly enjoying the lush irrigated fields.  I will wait to count them until later tonight.