A Day on the Rock

Dome Rock is a neat place to hang out for a while.  What a view from up here. We have a couple things planned for today and we are also anticipating the arrival of Pat and Harold with their new to them RV.  Can't wait to see it.  Today there is a cemetery walk at the Hi Jolly Cemetery and Ed and Lessie invited me to go along because Sue has no interest in seeing no cemetery!!! 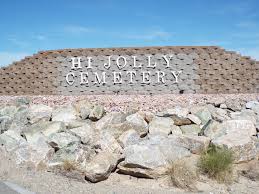 We got there, and there was a small crowd gathered for the tour. 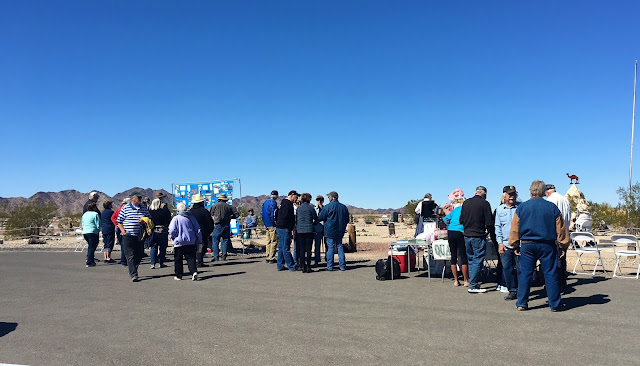 We were about a half hour early and they told us they were also running late so we had time to wander over to the Quartzsite Yacht Club.  I know, that's what I said, A Yacht Club in the middle of the desert??  Why yes.  And a nationally recognized club too.  For 49 bucks you can join and you even get a T shirt. 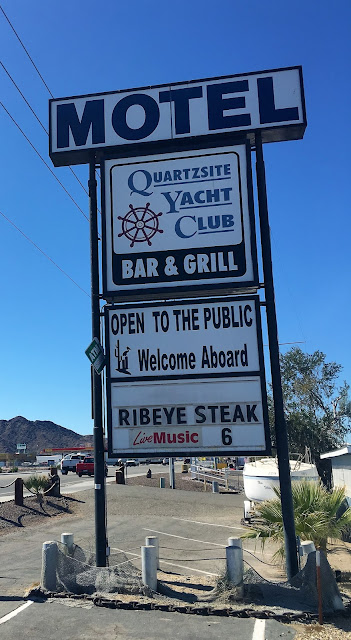 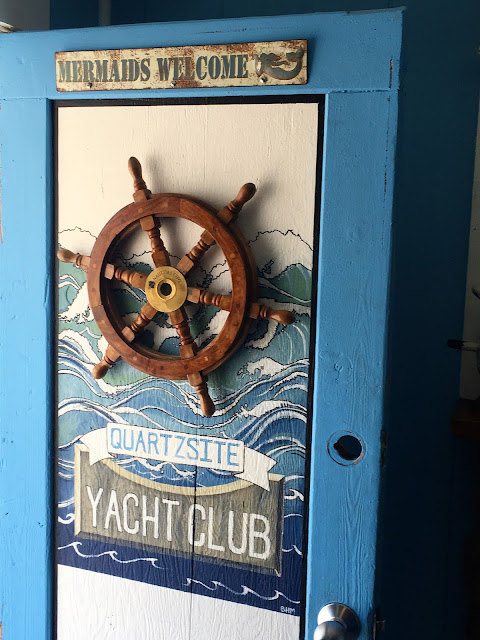 The Hi Jolly Outpost is the Motel headquarters and the nice guy there gave us a little history on the place.  His uncle owns it and he is just helping out for the busy season. 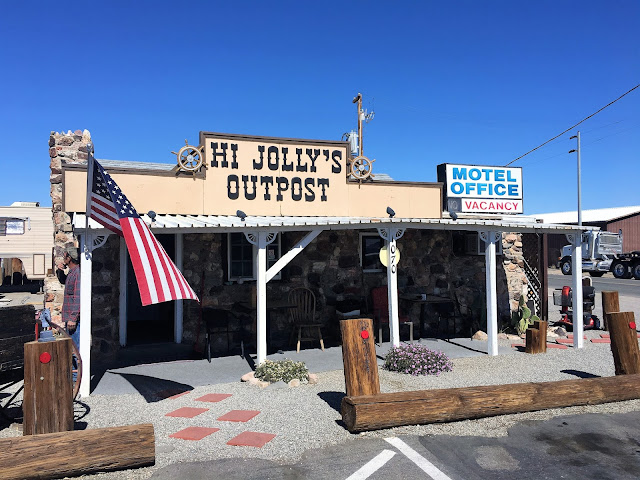 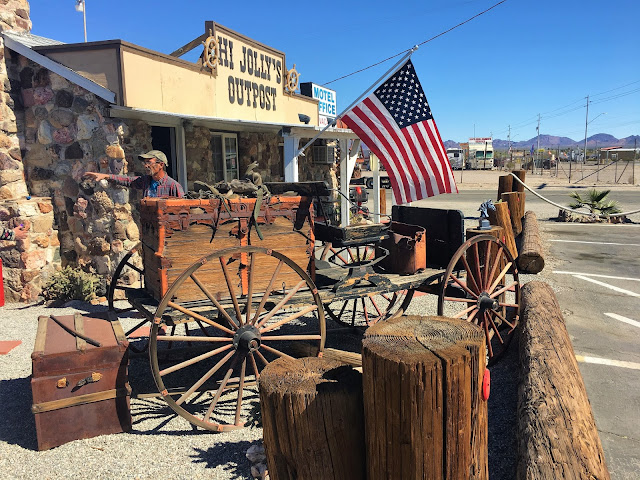 He told us that you can rent this 4 person boat for the night for $165 per night.  Not my idea of a good time but whatever floats or doesn't float your boat. 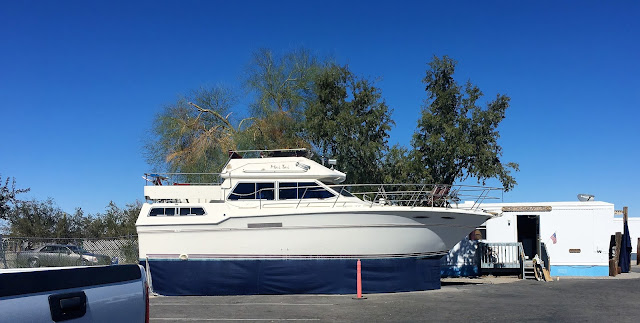 Right beside the Yacht Club was this great big piece of mining equipment.  It still looked operable but I think many a mans dreams have come and gone with every turn of the wheel.  I don't see my fortune being made with it anytime soon.  I would however like to know what the sales price is.  There is a telephone number on it so I may call and ask. 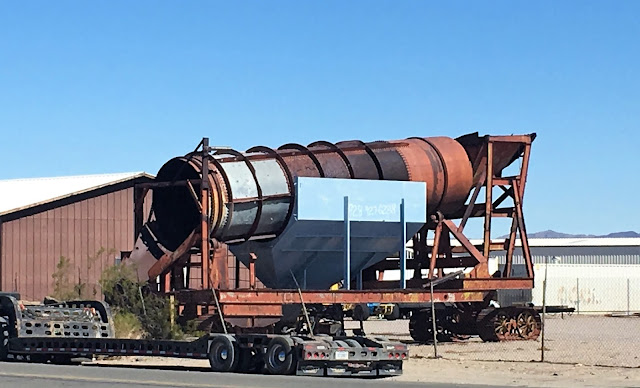 We had no trouble wasting a half hour looking around and it was time to head back to the cemetery.  A couple months ago when we were at Magnolia Beach, I think I made mention of the Hi Jolly monument they have at Indianola.  This is where Hi Jolly brought his camels to and then drove them overland to Quartzsite to participate in a government experiment which was to promote the use of camels for freight movement in the desert.  When the Civil War broke out, that was the end of that experiment,  and the camels were turned loose in the desert.  Hi Jolly is buried here in Quartzsite and a monument was erected on his tomb. 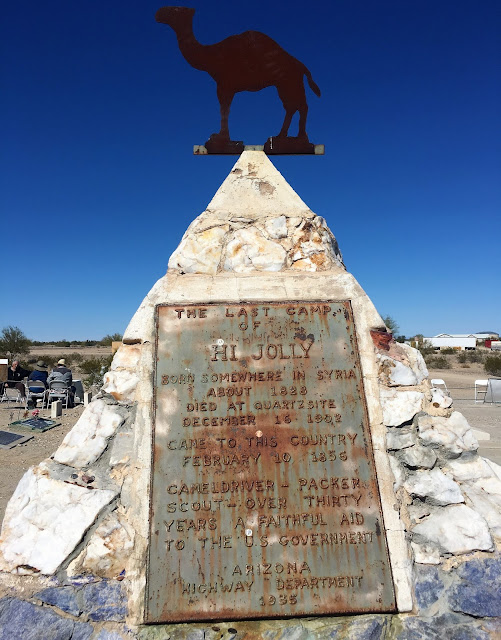 They had some people dressed up as some of the noteworthy people who were buried here.  We were impressed by the effort put into making this very informative for us.  This lady was definitely the drive behind it and she was running around all day keeping everyone in line. 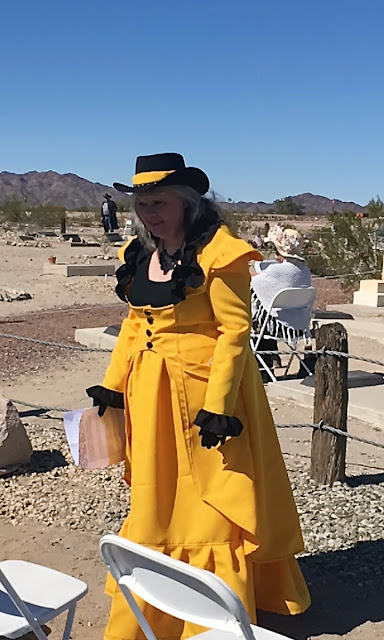 This lady was telling us about the family that ran the Hotel here in Quartzsite.  She had a colourful past and was quite the lady in the community. 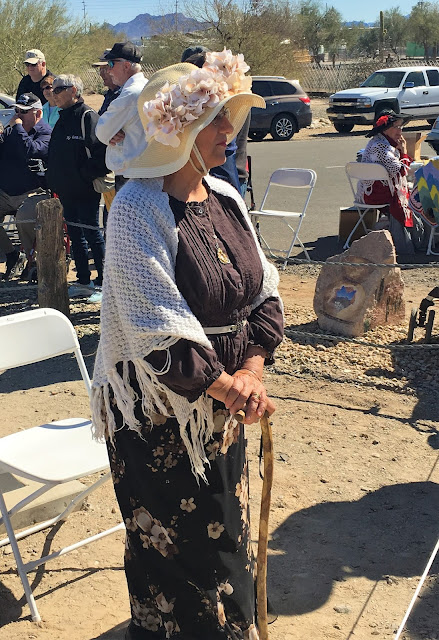 This gentleman is the actual mayor of Quartzsite and was here today playing the part of Buck Conners who was a well known Wild West Actor.  Buck is buried here and here is what Wikipidi has to say about him.

Buck Connors (November 22, 1880 – February 4, 1947) was an American actor. He appeared in 85 films between 1912 and 1941. The son of William L Conner and Leah Bowen, Buck was born in Streator, La Salle County, Illinois, and died in Quartzsite, Arizona.  Buck is buried in Hi Jolly Cemetery in Quartzsite 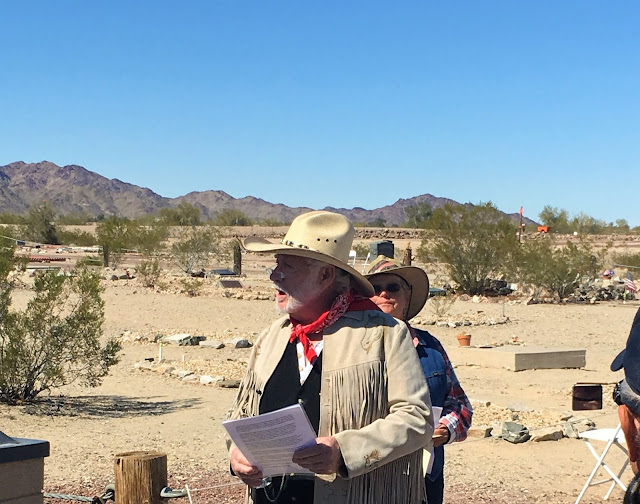 This gentleman told us about a travelling preacher who served this area for many years.  His story was quite interesting and when he closed his presentation with a heartfelt prayer, it became obvious that he was a minister in real life as well. 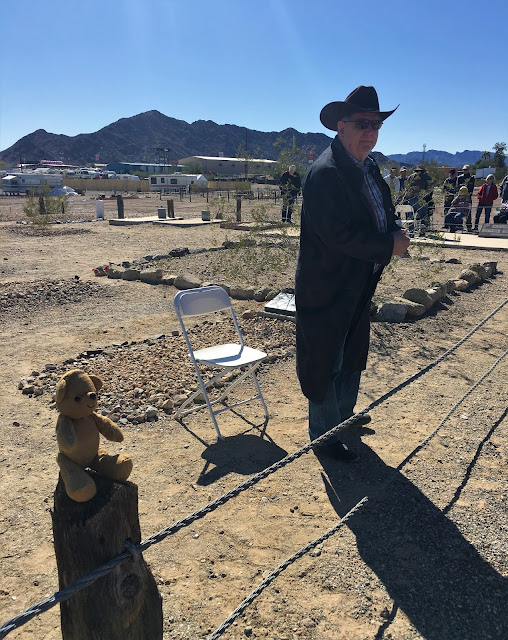 The best actor of the day was this guy who acted out a story of a recluse miner who was maybe not a socialite but rather a loner.  This fellow was the first auto accident in the community when he was run over by his own Model T while attempting to start it with a crank.   Maybe or maybe not!! 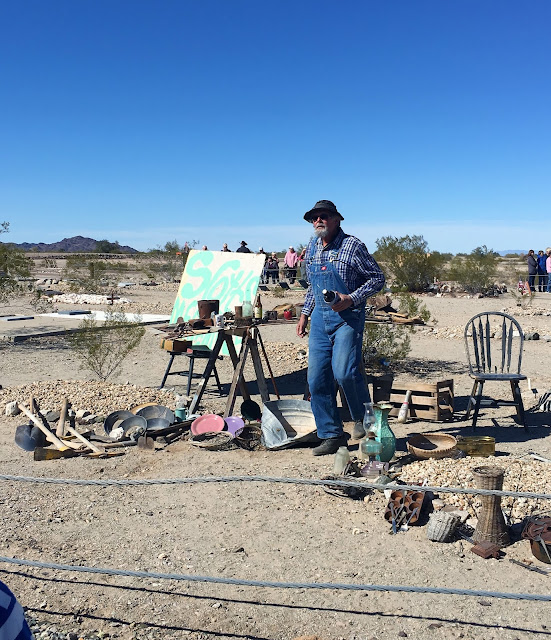 There was one grave with a wooden head marker and I didn't find out whose it was.  I'm sure it was a colourful character from around the area. 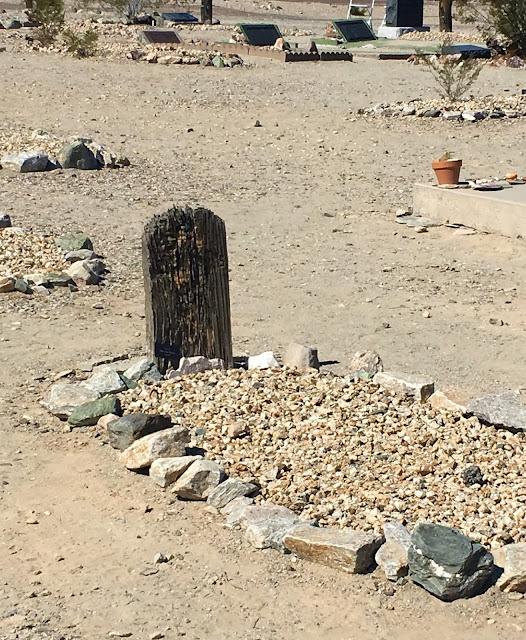 The whole tour took well over and hour and was very interesting.  It is neat when a group of volunteers put on something like this and I love all of the effort put into it.  Thanks!!  We headed for the hills and when we topped the ridge by Dome Rock we saw it for the first time!!  The new Alfa Gold which has already been named "Goldie". 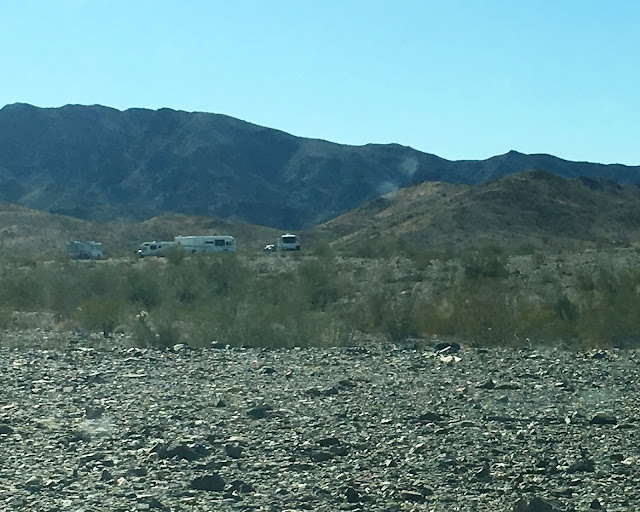 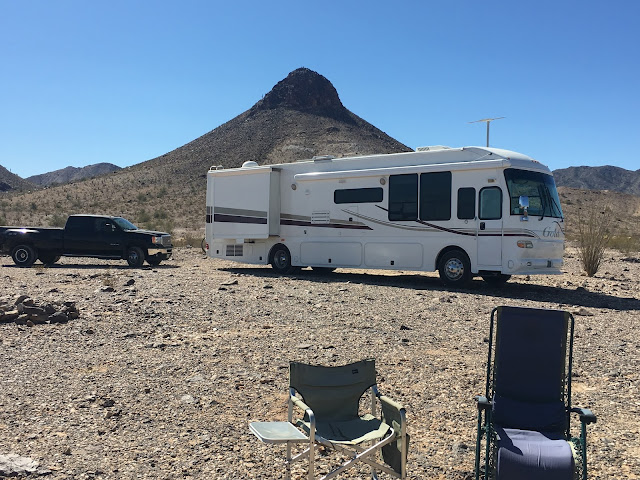 She is quite the unit and I will do an entire post on her soon.  It was nice to enjoy happy hour with our friends back in the circle again. 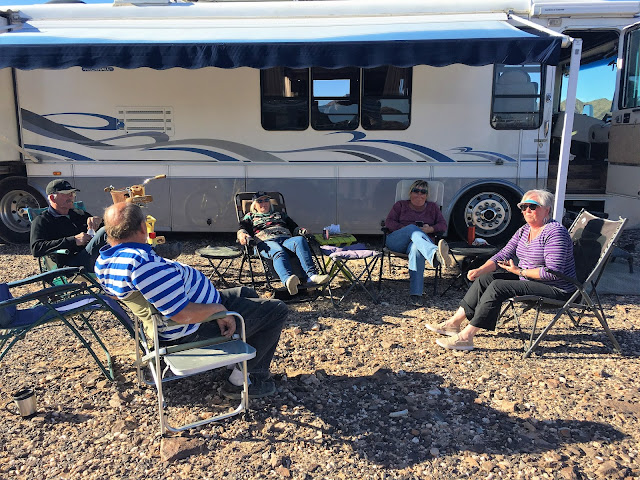 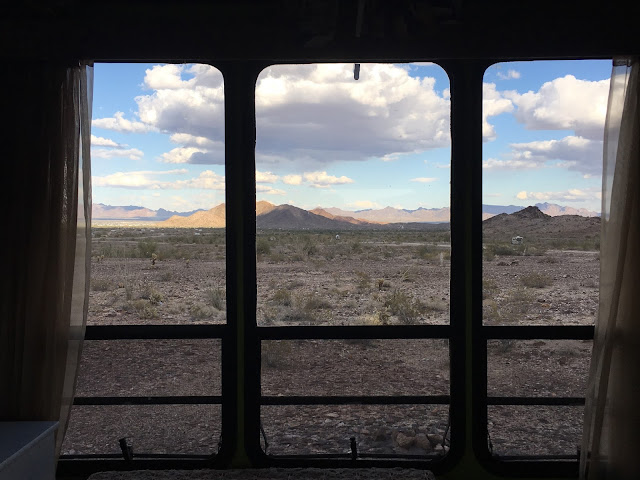 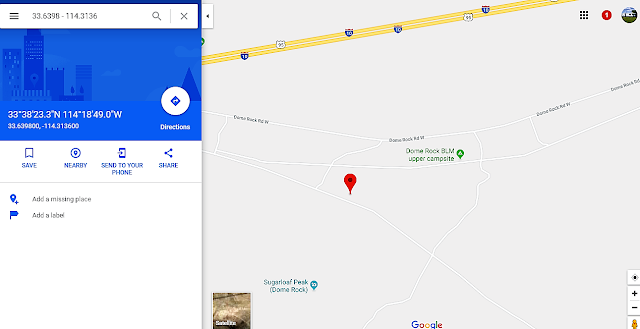 Posted by Lorne Green (A Place Called Away) at 20:16:00
Email ThisBlogThis!Share to TwitterShare to FacebookShare to Pinterest