Today was Sues Birthday and it started off much the same as any day.  Come to think of it most of the day was just like any other day.  lol.   Sue had decided to take me to the stock car races in Yuma for her birthday.  Of course I made the sacrifice and said yes.  Ed and Lessie had not been to car races in a long time so we brought them with us.  First stop (after a bathroom break behind a tree along the road, because it is and hour and a half to Yuma with no bathrooms along the way) was the Arizona Marketplace in Yuma.  We like this Market because it is more RV orientated than the Mesa one. 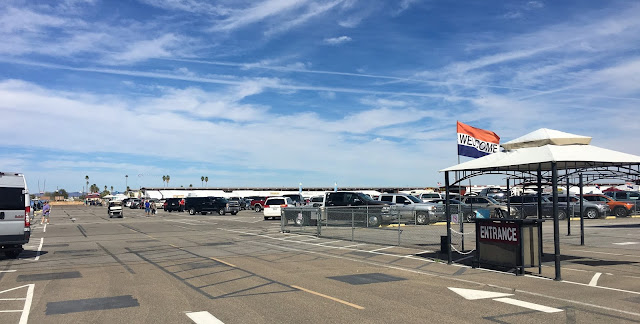 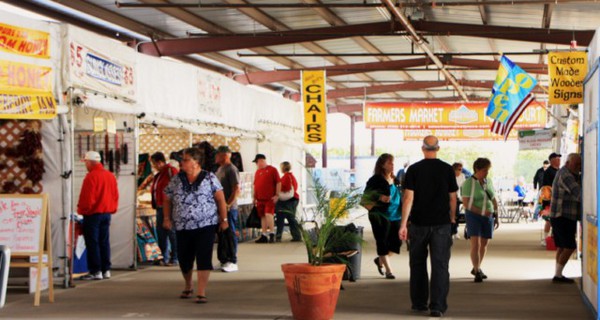 As always there is some form of entertainment around the lunch hour.  We didn't stop to listen today. 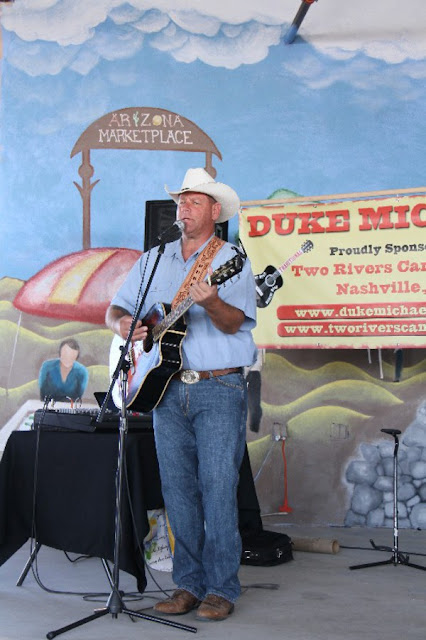 We picked up a few treasures in the couple hours we were there and got our daily dose of exercise.  A quick stop at Walmart and then it was senior supper time.  My watch said 4:00 pm.  The reason for the early supper is that we want to be at the racetrack shortly after 6.  Guess where Sue told me I could take her for her birthday supper? 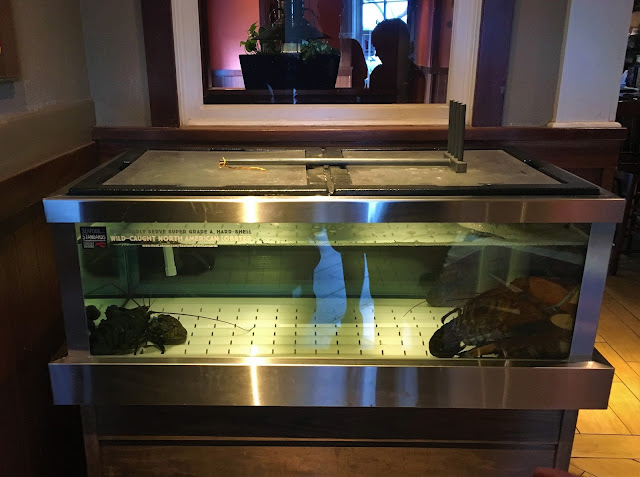 Yup you guessed it, Red Lobster. 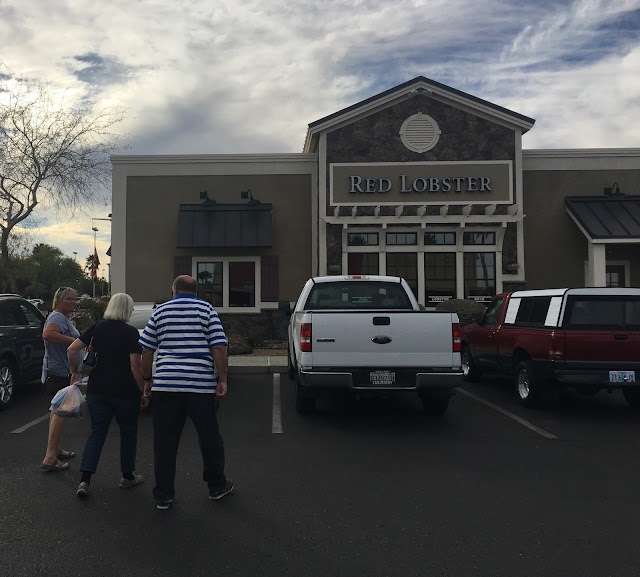 I had a card and Sues Birthday present ready to present to her.  All week she has been trying to find a brown permanent marker to touch up some scratches in the floor in the Ponderosa.  Well it was like it was my super lucky day because when we stopped at Walmart, there were a package of markers with.....you guessed it, a brown marker in it.  Whew, that was just under the wire because, as of 3:30, I had nothing for her yet!!!  I think she was thrilled!!!  She even mentioned to the waiter what her darling husband had bought her.   The waiter quickly responded that it was a lovely present and probably a way of me saying that she must have made a  permanent mark on my life!!!  It was the perfect response.  Almost brought me to tears, and was worth a fist bump to him from me.  Sue mumbled something about making a permanent mark on me tonight when I was sleeping!!!  Glad she was pleased.

It was a really nice supper and Sue even got the free desert without the staff singing to her as per her request.  They told us we really didn't want to hear them sing anyway. 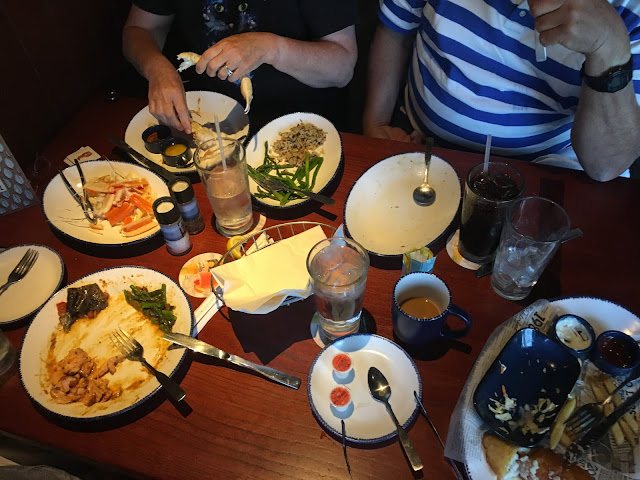 We headed out to the Cocopah Speedway and got there about 6:30.  We found some good seats about half way up and settled in for a fun, noisy evening.  It was fun watching Ed and Lessie anticipating what was to come. 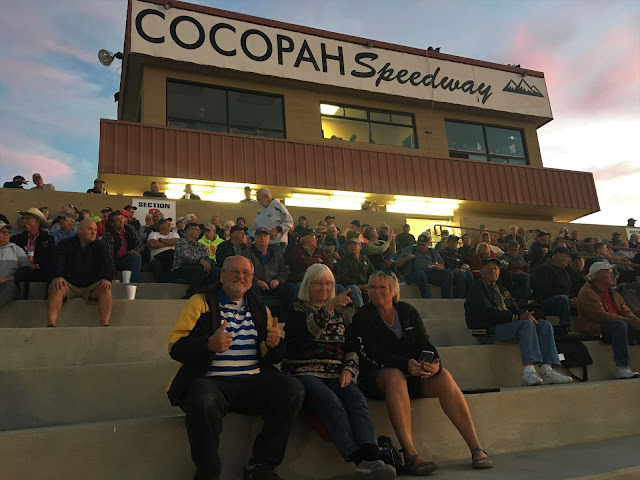 I caught a neat picture of a cowboy in the setting sun. 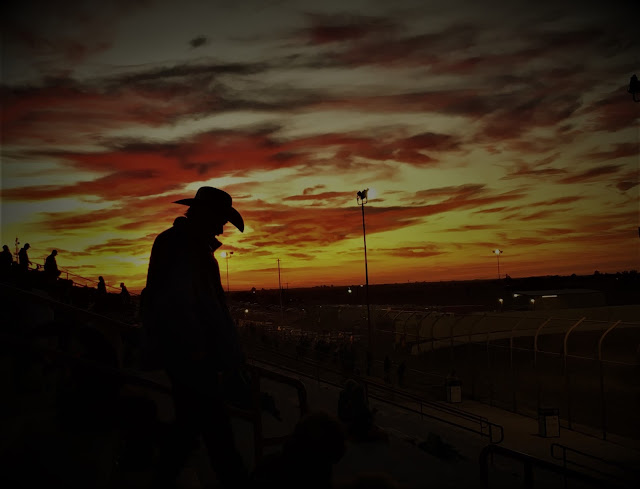 It was soon time for the noise and the excitement. All night long we picked cars in each race and kept track of our points.  3 for a win, 2 for 2nd and 1 for 3rd.  Sue ended up with 18 for the most points and I had 10 for the least points.  Ed and Lessie were somewhere in the middle. 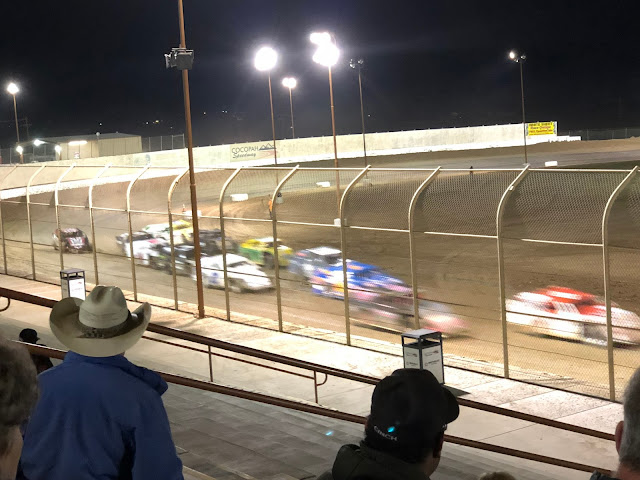 It was so much fun watching Lessie getting right into the racing.  She seemed to love every #7 that came out and did very well with them. 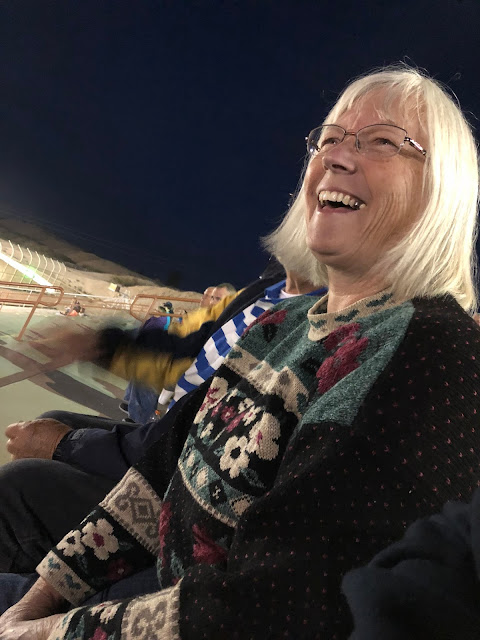 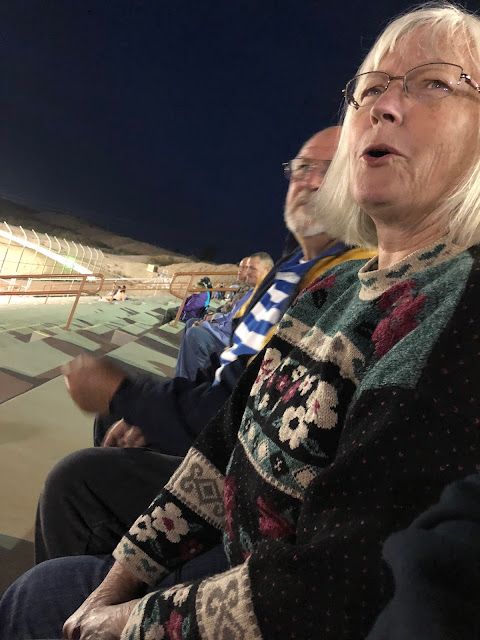 When it came time for the last race, there were some people in front of us who were doing a little wager on it.  A guy (arrow #1) was collecting $2.00 to enter, winner takes all.  They asked us if we wanted to join in and the girl next to me (arrow #2) assured me it was legit and even helped me pick a car.  We picked #755 which was driven by Jeff Taylor.  Now because we know a Jeff Taylor at home, we thought maybe it would be good luck.

So the race started and low and behold our guy was in second place quicker than you could say "Jack Sprat"!!   He stayed in second for most of the race.  It sure made it interesting.  There was a battle the whole race between the front runners.  At the end of the race things got all messed up and we finished out of the money.  Actually a car from Saskatchewan won the race and the ladies (arrow #3) collected the money.  Probably 40 bucks or so.   It's neat that we can go to a strange place and meet people as nice as the young lady that helped us.  She made us feel like a part of this little group and for a short while we were part of this racing community.  Thanks whoever you are!!

After a wonderful day with excitement, celebration, and good company, we headed for home.  I will use the sunset at the racetrack as the view from where we sat this evening. 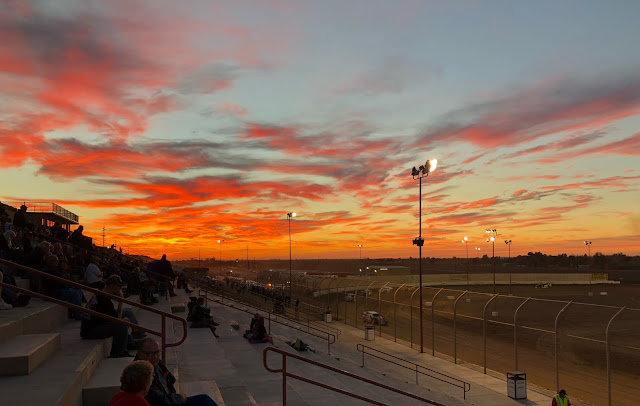 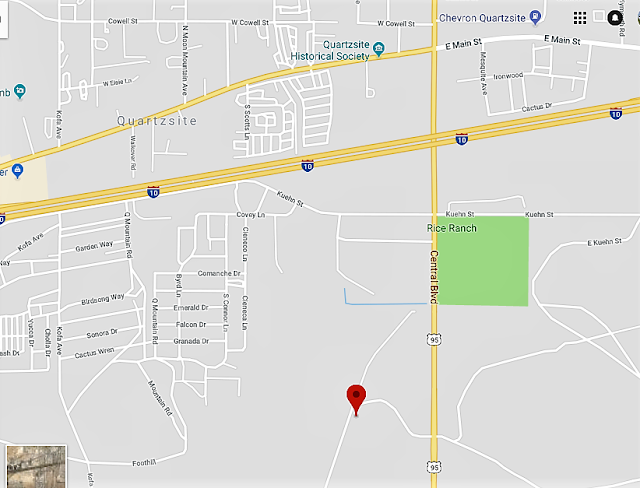