WHERE ARE WE? La Penita, Mexico
A pretty slack day here at the ranch!!   Not much happening as long as you were not into poking a crocodile with a stick.  He was not in a good position to approach because all escape routes were blocked off.  Nobody died in the taking of this picture.

It was another nice warm day and after supper I headed up to the big RV Park for the music jam.  Being there for the music reminded me of CJ's music in the park and a little twinge of "hitch itch" went through my veins.  I have to check myself back to reality and look at the pictures on Facebook of the shack that were posted today.  There will not be Music in the Park for a few days I'm sure. 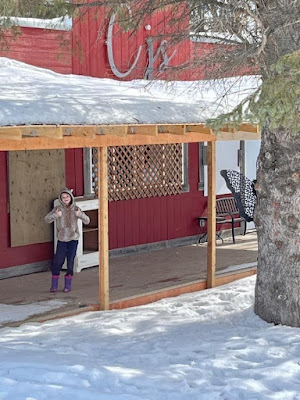 The lineup was similar to the one 2 years ago with Del, Doug, Tom, and Michael.  They are all good players and singers and each one brings a different flavour to the evening.   They take turns playing and singing and lots of times they accompany each other which adds a little flair. Normally there are 6 or 8 jammers but some of the other jammers have already headed home. 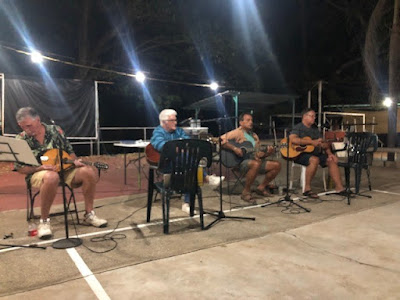 Last night at supper I requested Del to sing his "Don't look good naked anymore" song and tonight he obliged.  He is a bit of an entertainer.  Thanks for that Del. 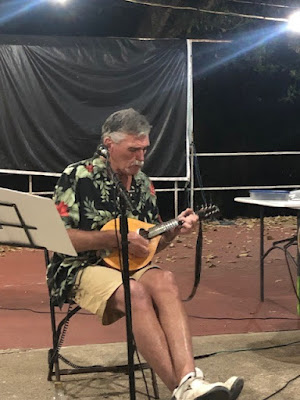 A surprise performance was in store tonight.  George and Henny have their daughter Brenda visiting them from Manitoba, and about half way through the night she asked if she could sing a song.  Wow!!  She is a true performer and can sing like a bird.  She has that easy listening voice that keeps you spellbound.   Apparently she was a performer at Celebrations Dinner Theater in Winnipeg for 8 years or so.  Thanks for performing for us Brenda!! 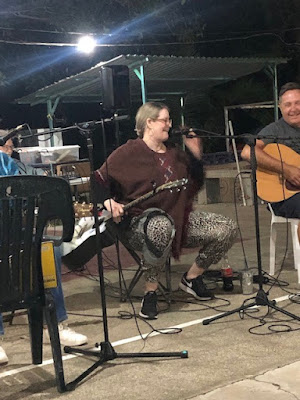 This was the last jam for the season I think, so there was a good toe tapping turnout!!  They played for almost 3 hours.  And the cost was......nothing!!!! 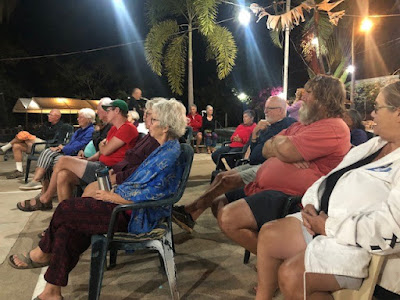 By the time I crept home through that creepy graveyard I showed you the other day, I was exhausted so went straight to bed.  Hope you had a great day!!
Posted by Lorne Green (A Place Called Away) at 14:22:00
Email ThisBlogThis!Share to TwitterShare to FacebookShare to Pinterest