Today we got a big surprise.  When we parked last night at Home Depot I didn’t get time to talk to the manager about staying the night.  By the time we got back from the hospital, it was after 7 pm and the store was closed up tight.  Not a car in the lot.  Only store in town still open was Walmart.
I thought that was strange.  So I said to Sue, let’s move a little closer to the store to get better Wi-Fi because they won’t open until noon on a Sunday.  Well when we awoke at 8 am the parking lot was half full of cars!!!  They open at 8 am on a Sunday morning, as does every other store in town.  I guess I learned a lesson about checking the store hours before assuming anything.

Once we left Owen Sound we were on the Saugeen First Nation.  We decided to stop at a gas station along the way that had easy access in and out.   We found a nice one with an open space around it and as we pulled up a guy came racing out to fill us up.  He was beaming as he announced that he had just opened his station Rootes Gas Bar a week ago, and that I was the very first motor home he had ever filled.  He was worried that he didn’t know where the fuel cap was.  What a great guy, and we got great service, so if you are ever a few miles west of Owen Sound (French Bay Rd) stop at Rootes Gas Bar and Fillerup.

We continued on down the east side of Lake Huron and started getting into country that seemed familiar.  That’s because fellow blogger Al of The Bayfield Bunch has taken pictures of almost everything up and down this coast.  He is awesome with photography and you need to go look at his pictures.  He even has albums on the sidebar of things like barns.   Anyway, Al has headed south ahead of us so we couldn’t stop for coffee with him.  I did think of him with every Tim Hortons we passed.  A few times he has mentioned him and Pheebie heading to Godrich to watch the ships loading salt in the port so we headed down there.  Sure enough a big one was just getting ready to load so we watched for a while.

One of the things that I thought about was how much the fuel bill would be to fill that puppy up.  These two trucks were working hard to make the bill as large as possible.

I wonder if our MH would fit and they could ship us to Newfoundland. 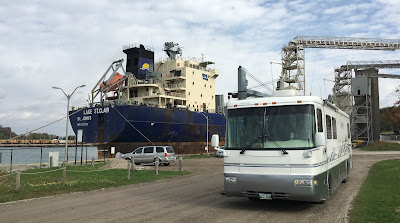 We went for a drive down the beach and saw the gorgeous old station that has been fixed up into a restaurant.

Also as we were leaving we went around the biggest round about I have ever been on and the Hotel Bedford was on the corner.  Very pretty town.

I guess Godrich must be dog friendly cause there was a huge dog on this guys lawn. 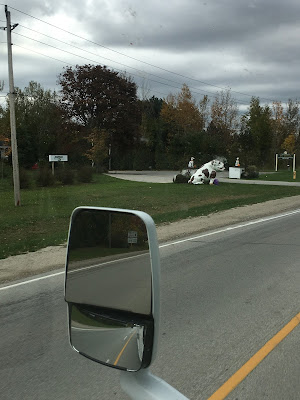 We gave a big salute on the air horn as we went by the town of Bayfield.  Hope to catch you again some time Al, Kelly, Pheebs. 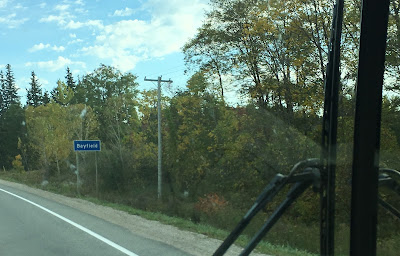 Something we noticed were the occasional wind swept tree.  It was like it was defying death and saying “Bring it on wind”.  They only seem to be near the lake or Georgian Bay. 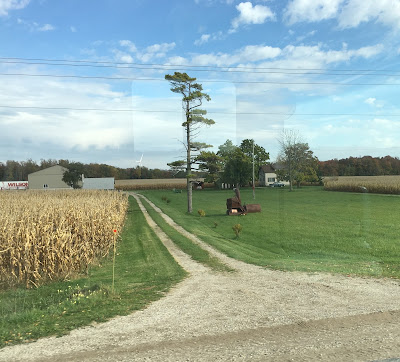 We have noticed a few signs protesting the wind turbines here.  Not sure what the protest is about but it seems no matter what happens on this earth, someone doesn’t like it, so good for you for speaking up.  There are thousands of turbines as far as the eye can see.  I think they are here because of why the tree looks like it does.  Is windy here!!! 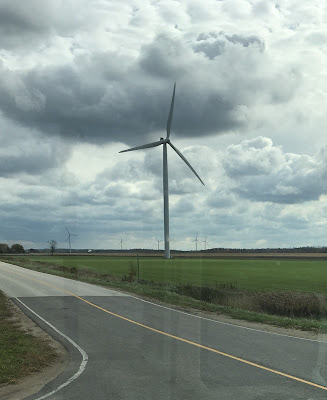 Sue never ceases to amaze me.  She looks over and says do you want a spot on the beach tonight.  Guess where we are?  Smack dab on the shore of Lake Erie.  How nice is that??

We have an awesome view of the lake and houses along the shore of Lake Erie from our front yard. 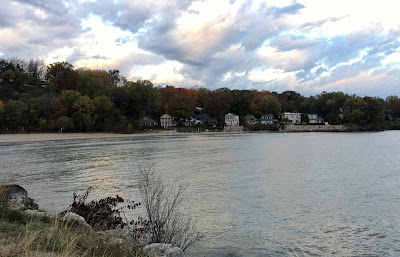 Lots of trails around here and we are only a block from the resort town.  We will walk down town tomorrow morning to check it out but tonight Charlie and I went for a little walk behind the motor home.  We were a little surprised as we were looking south over Lake Erie toward Michigan at what we saw, so I says to Charlie, Charlie it looks like maybe they have started the wall already?? They haven’t even had the election yet!!!

On our walk we ran across a rather weird plant.  It’s a weed I’m sure but it looks like cotton. It has white fluff inside and brown flat seeds.  Any one have an idea?

Well it was an awesome day as usual.  I think Sue is starting to recover.  She was giving me heck like old times today.  Hope she is better tomorrow. 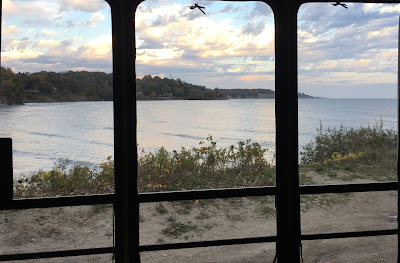 Posted by Lorne Green (A Place Called Away) at 10:27:00
Email ThisBlogThis!Share to TwitterShare to FacebookShare to Pinterest