There's a hole in the bucket

Today Sue spent the day with her sister just doing nothing.  They watched some movies and had some snacks and that was their day.


I decided today would be the day to hunt down our elusive water leak.  We have been losing a small amount of water for a long time, and the reason I know is because every once in a while the water pump would cycle for no reason at all.  On the trip down to Ontario I also observed a small wet spot on the ground under where the hot water tank is, after we had parked for the night. So today i got in there and got dirty.  I checked all the water lines leading into the tank and they were dry, but when I removed the panelling around the tank it was quite wet in there.  That told me that I had to remove the tank.


The removal took a couple hours because I didn't rush.  I have learned that sometimes it better to look and think before tugging and pulling.  This was obvious here because there were lots of wires and lots of screws holding the tank down in very odd places.  And not to forget that gas line to disconnect.

I was lucky in that most of the wires were long enough that I could deal with them after I got the tank out in the open.

After removing the insulation it was quite clear that the tank was leaking along one of the weld lines.  I prodded around and am quite confident that the tank has not rusted significantly so I believe I can clean up the spot and reweld it.  I will pressure test it on Monday to confirm the exact spot it is leaking and get it welded up.  Will continue this on Monday. 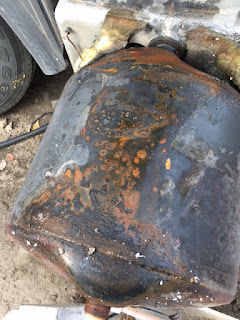 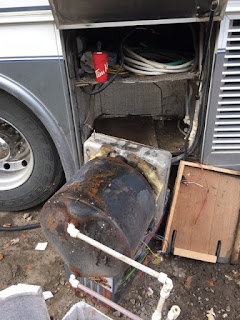 We are still enjoying the beautiful colours of fall.


Posted by Lorne Green (A Place Called Away) at 08:01:00
Email ThisBlogThis!Share to TwitterShare to FacebookShare to Pinterest