On to Cottonwood AZ.

Moving day started out cool but nice.  Susan has been after me to get some more practice with the drone so I got it charged up and did a flight.  I still need a lot of practice figuring out what the best angles are for taking the best pictures.  I also have the ability to play with the exposure in flight but haven't mastered that skill yet.  Here are some pictures of where we were parked this morning near Williams AZ.  It was a really nice setting in the pine trees on the edge of a pasture like clearing.  Reminds us of home on the farm.

Today we are heading to Cottonwood AZ, which is south of Flagstaff for a number of reasons, but the one I like is to get some heat before we start our trek north where we know it will be a couple months before we get to bake in the sun again.  With the exception of  Thursday, it looks like nice weather in Cottonwood. 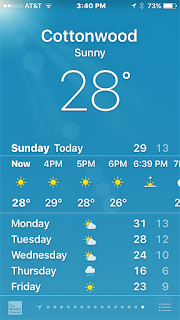 We headed out about 11 am and had to do the nasty chores like dumping, water, fuel and propane in Williams before heading east on #40 highway.  It is without a doubt the roughest highway we have been on in the USA.  It is better in the passing lane but the road is quite busy so you don't get much chance to travel there. 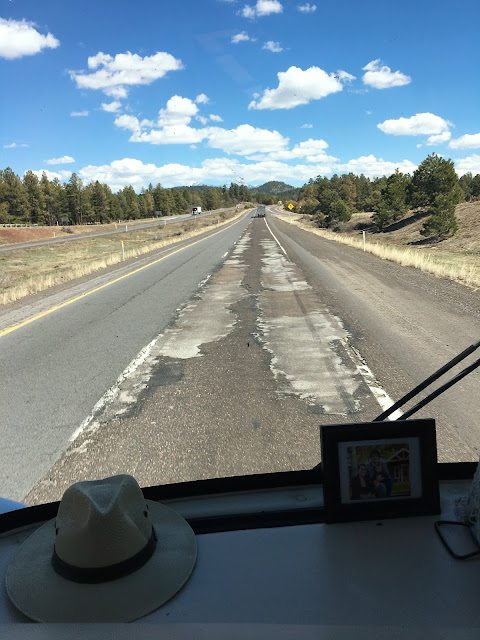 We arrived in Cottonwood just in time for Happy hour and while we were sitting around I got the drone out again and took some more pictures.  I think I may be banking some brownie points today with 2 drone flights.   The spot we are in is on the edge of a gorge and we get quite the spectacular views from here. 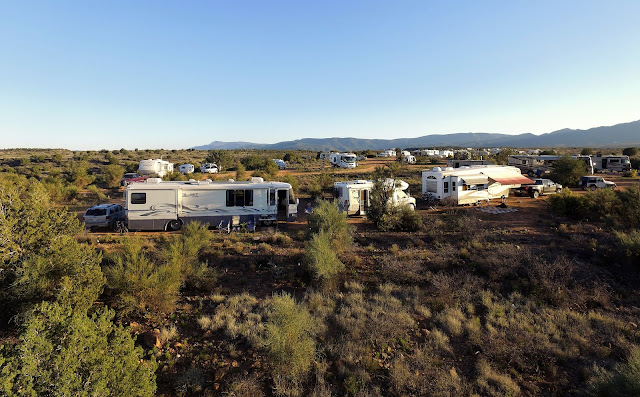 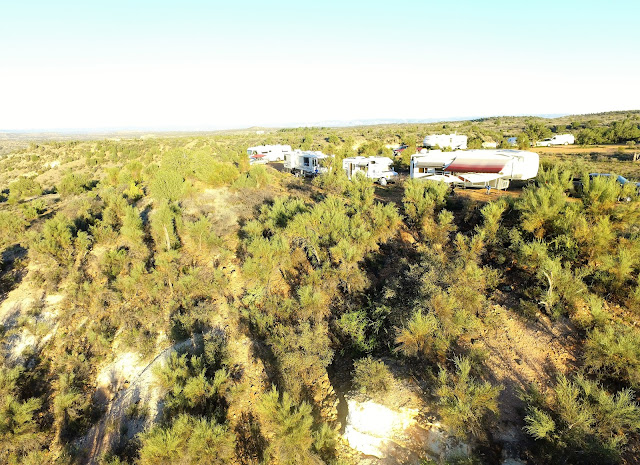 The view of the red hills of Sedona from our front yard is spectacular.  We will go up there later this week. 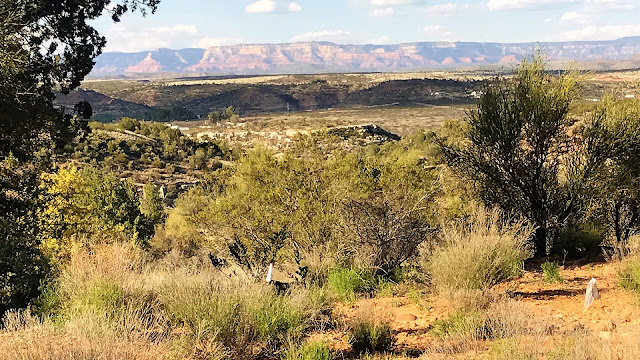 After supper Sue and I headed in to Cottonwood for ice cream.  We looked up in the mountain and there was Jerome nestled way above us.  We were immediately drawn to it because we have been to Jerome in daylight, but never at night.  Although most of the stores were closed the bars and restaurants were doing a good business.  The Grand Jerome Hotel is a mystical building on the highest part of the mountain in town.  It used to be one of the biggest and best hospitals in Arizona years ago so there is an aura about it.  They say over 9000 deaths have occured there. 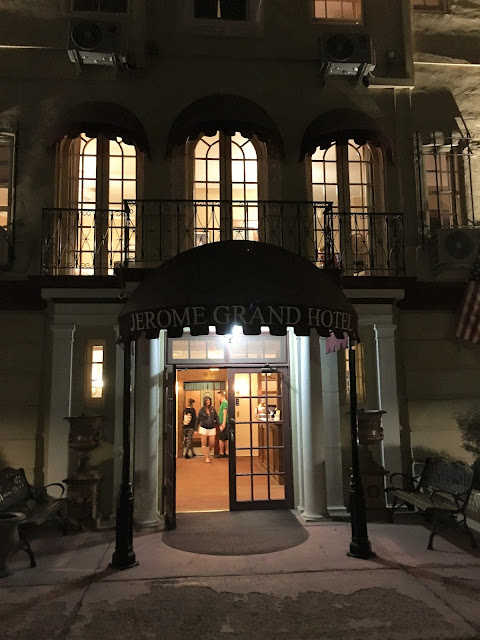 Outside the hotel was a fruit tree of some sort in full blossom.  Oddly enough it is the only one I have seen in blossom this spring.   It was right under a street light which made it quite spooky. 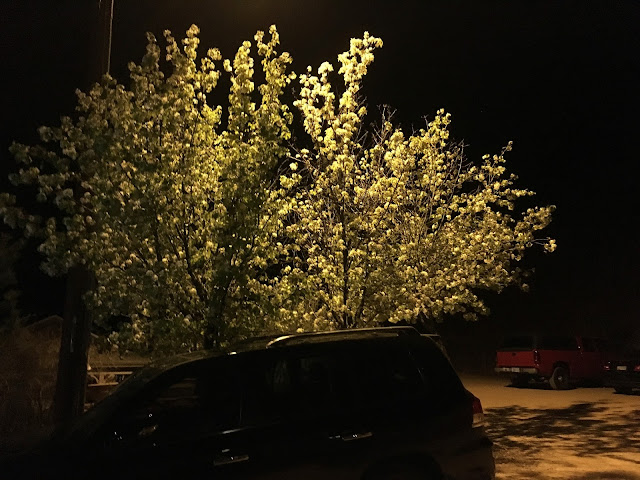 When you walk up to the edge of the street at the hotel you can see for miles down into Cottonwood in the valley below.  It is quite spectacular. 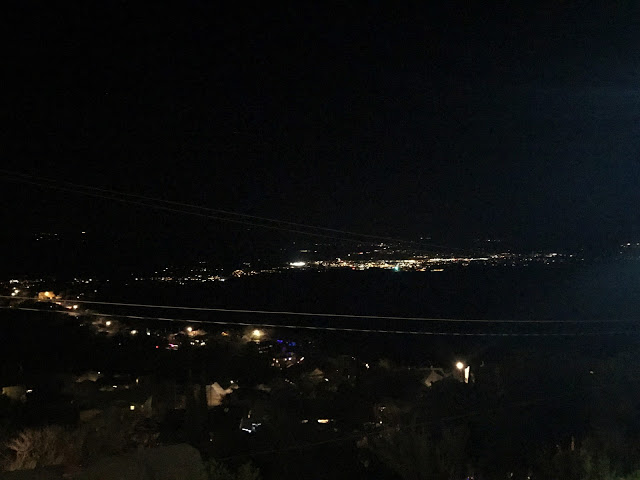 We headed back down the twisty road, through Cottonwood and out to the turn for the Thousand Trails Campground.  We are not staying at the campground, but our boondocking spot is down that road a little ways.  In the next few days we will return to Jerome in the daytime and will share more photos then. 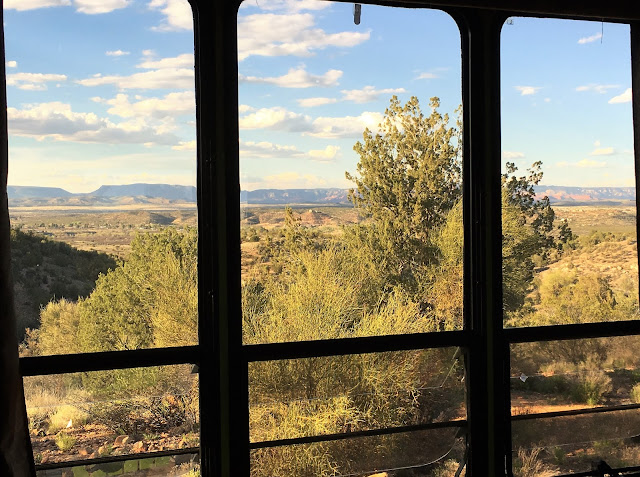 Posted by Lorne Green (A Place Called Away) at 23:01:00
Email ThisBlogThis!Share to TwitterShare to FacebookShare to Pinterest