We got our Kicks on Route 66

We headed down the road again today and decided to keep with the Route 66 theme.  It is a quiet road with some nice country to see.  Its like a break from the Interstates but does take a bit longer.  Time is not a factor for us so we like the back roads. 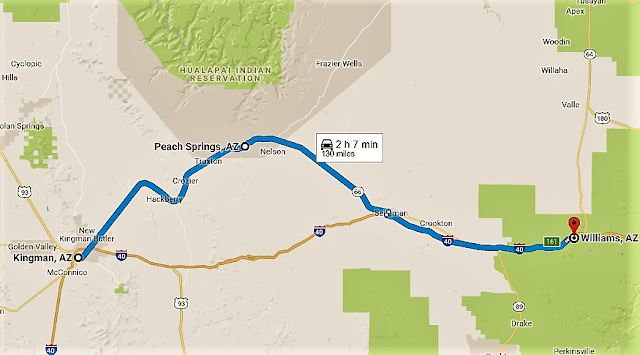 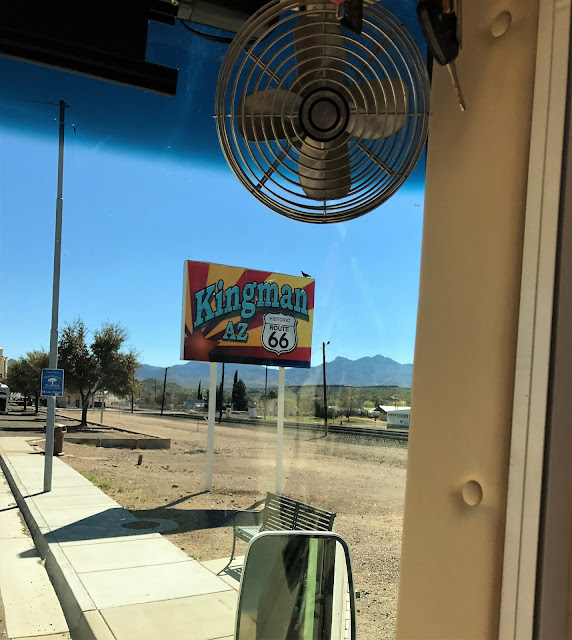 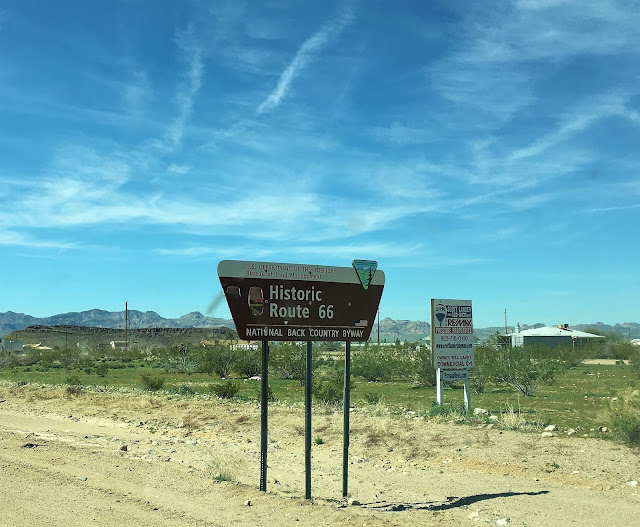 North of Kingman is the airport.  This airport houses a lot of commercial airliners which are in storage much the same as the aircraft at the boneyard in Tucson.  I had hoped to do a tour of this one, but apparently that is not possible, so this photo is as good as it will get.

First stop along the way was the Hackberry General Store.  I had read about this place on some blogs and reviews and they all recommended we stop to see what they have.  What a neat souvenir store and lots of different memorabilia. 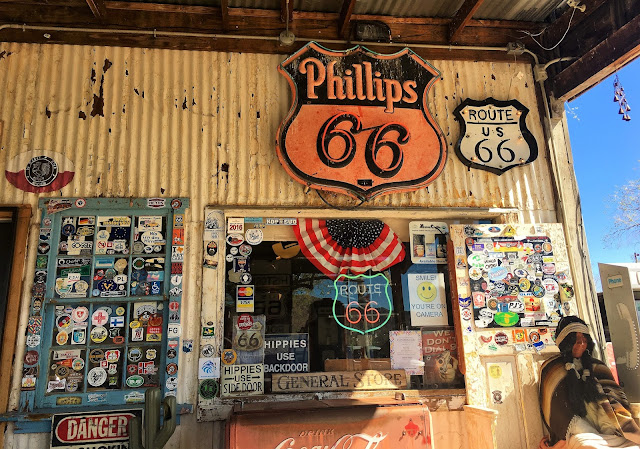 The Sheriff was there somewhere cause I saw his car outside. 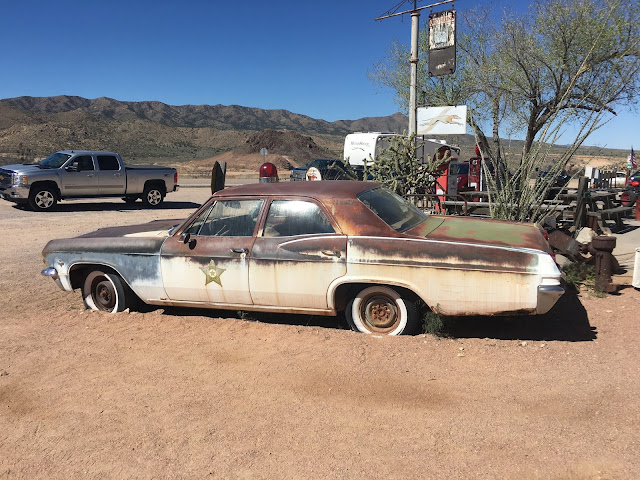 There were a couple of interesting characters working on a 1949 Ford 1 ton in the garage. 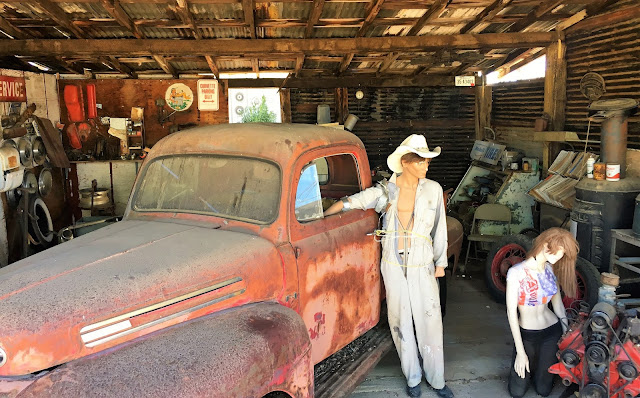 I was a little concerned that the service was not that good here because it looked like this car had been waiting a long time for gas.  However the service inside the store was great. 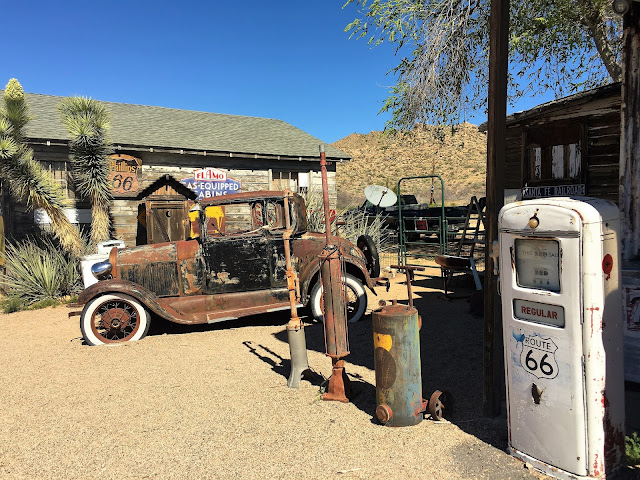 I just had to put on a hat and vest and make a pass at the pretty young thing at the bar.  Don't think she cared much for me by the look on her face, or maybe she was just surprised that I make a good lookin cowboy!!!


The gentleman at the counter said I owed him $100 bucks for borrowing the props to take the picture, but agreed that if I mentioned this place and its owner Amy Franklin in my blog he would wave the fee.  He told us that Amy was the newest owner of the place and we hope she does well with this venture.

Make sure if you are able to take a drive up Route 66 from Kingman to stop and see Ray.  He is super friendly and was able to talk Sue out of a few dollars for trinkets.


Next stop was Grand Canyon Caverns.  I had read a little about these Caverns and everyone said it was worth the time and admission to see.  So we decided to see for ourselves. 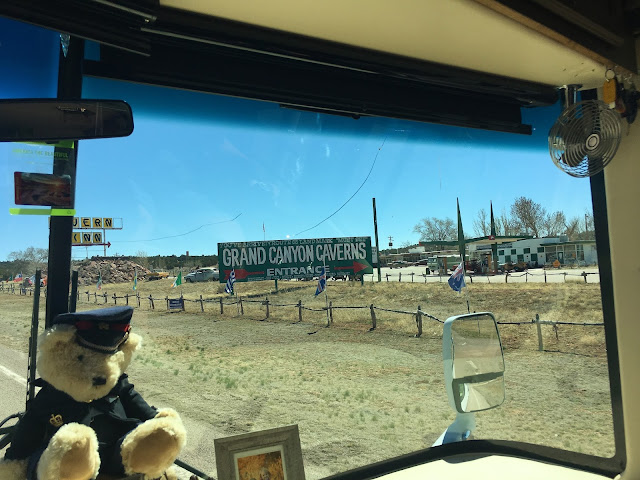 The speed limit up the road to the caverns was 25 mph and I was glad I was watching my speed when I saw the speed trap. 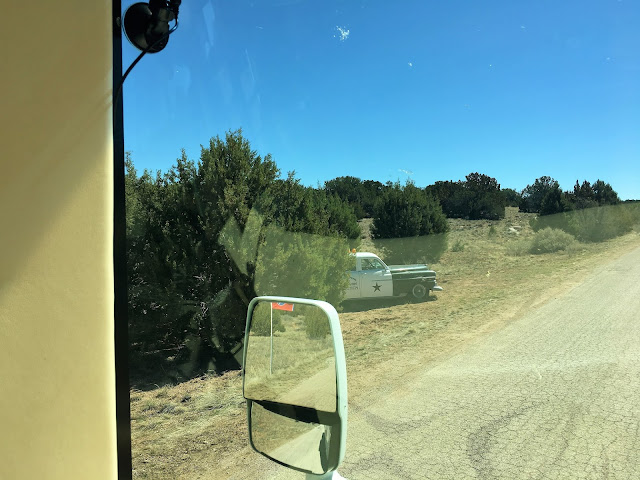 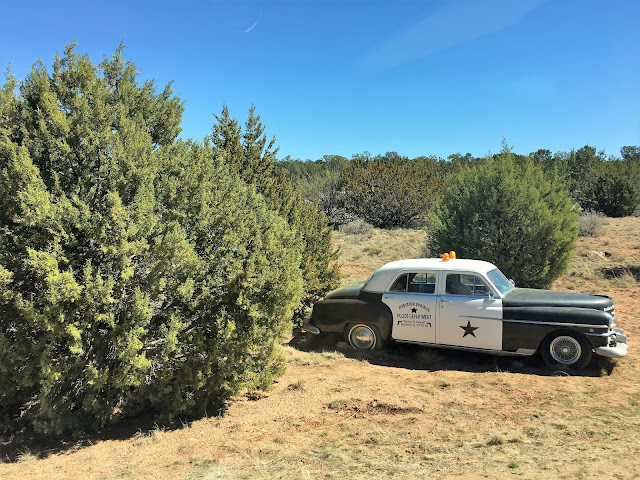 There was plenty of room in the parking lot at the Caverns for lots of RV's.  We went to check on a tour and the girl said half and hour.  We had time for lunch before going. 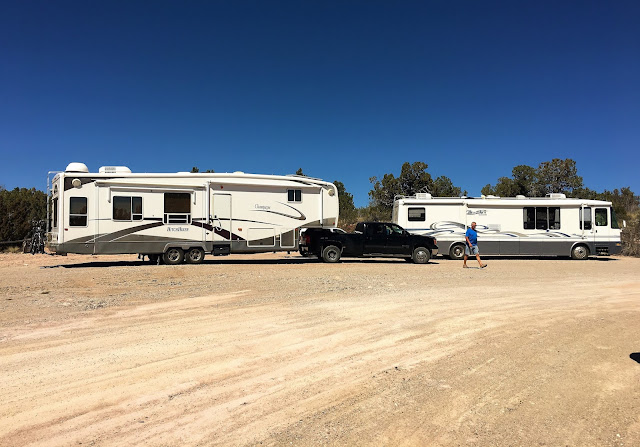 We checked out some of the stuff they had around the yard and in the building.  Our friend Rowdy would be proud to know that I am helping out around here if there are any fires. 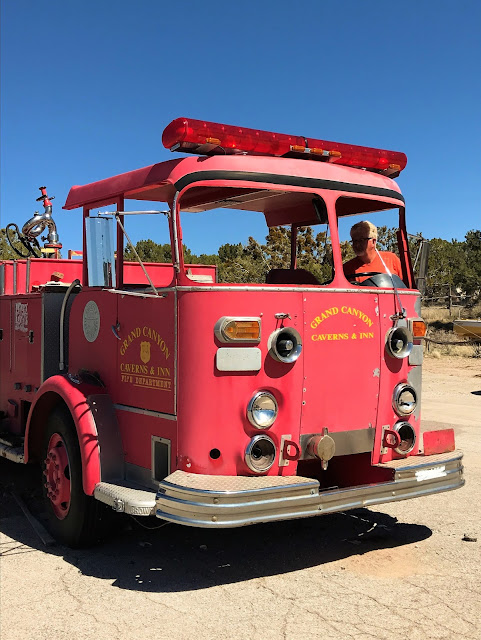 The original tours were a little less appealing as they used to give you a coal oil lantern and tie a rope around your waist and lower you 220 feet into the cave. The customers were called Dope on a Rope. 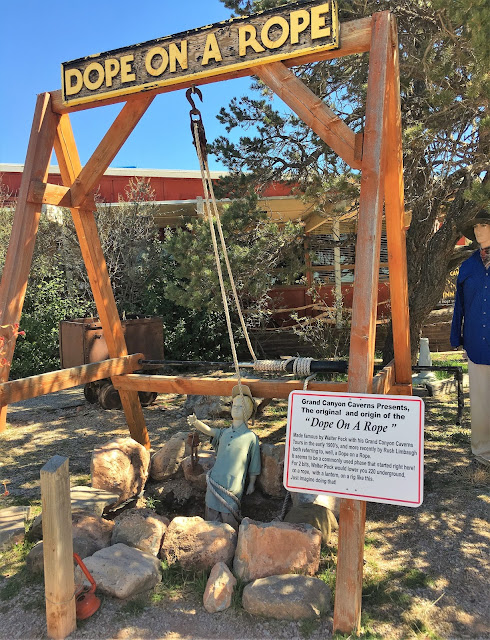 When we got inside there was a full size wooden carving of a man.  I think it looks like someone I know but I can't think who.  Maybe its you? 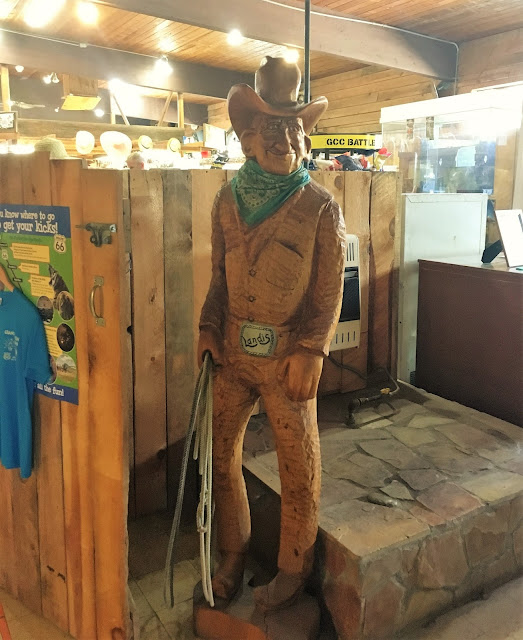 They took us down 220 feet in an elevator to the Caverns below.  Very pretty but these were very open caverns unlike any others I have been in before which were quite small. 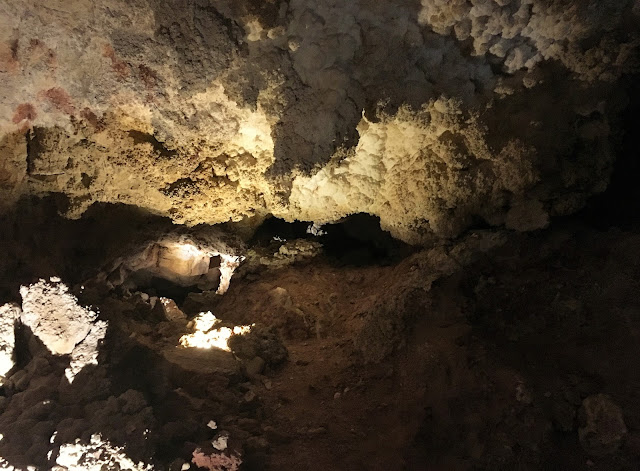 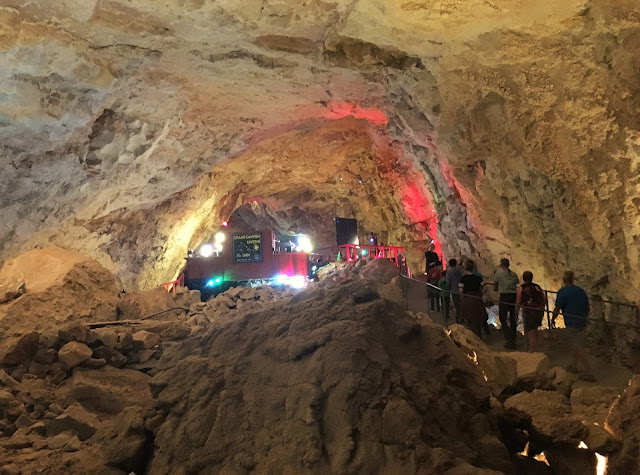 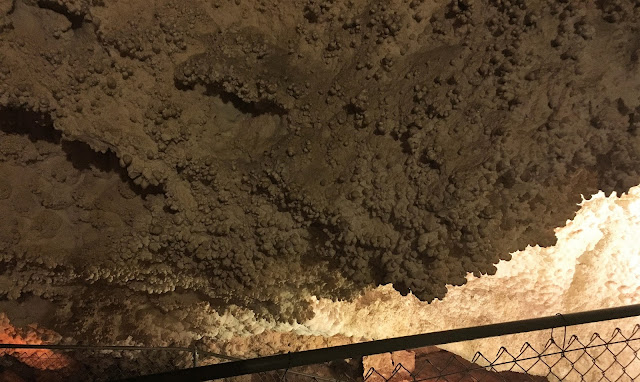 For $800.00 a night you can spend it in the caverns special overnight accommodations.  I'm not sure I could do it though. 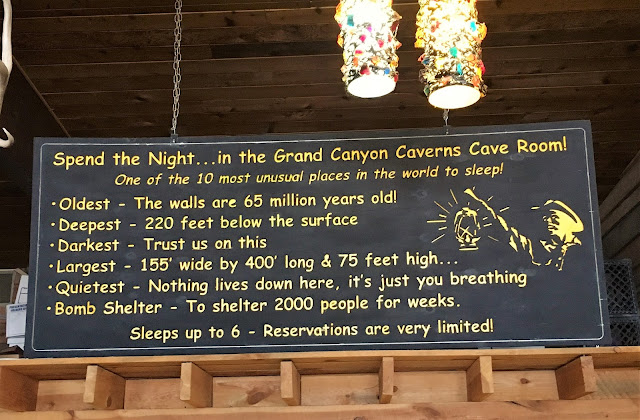 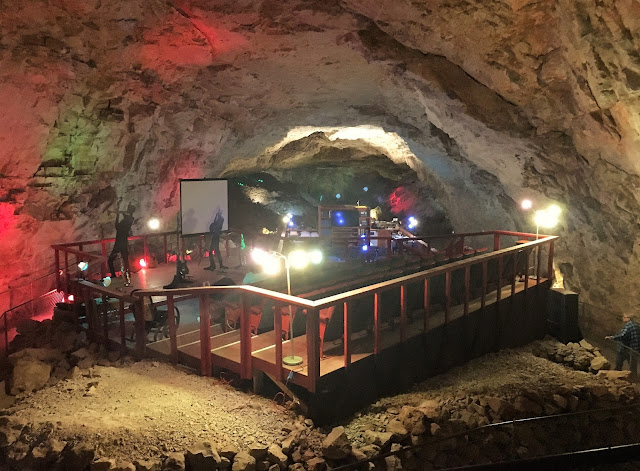 Back in 1962 when the Cuban missile crisis was on, this cavern was chosen as a fallout site for about 2000 people in this area.  They brought enough supplies for those 2000 people to live in the caves for 2 weeks. There are barrels of water, crackers, candy and cardboard potties stored here.  The guide said the food would all taste like dirt by now. 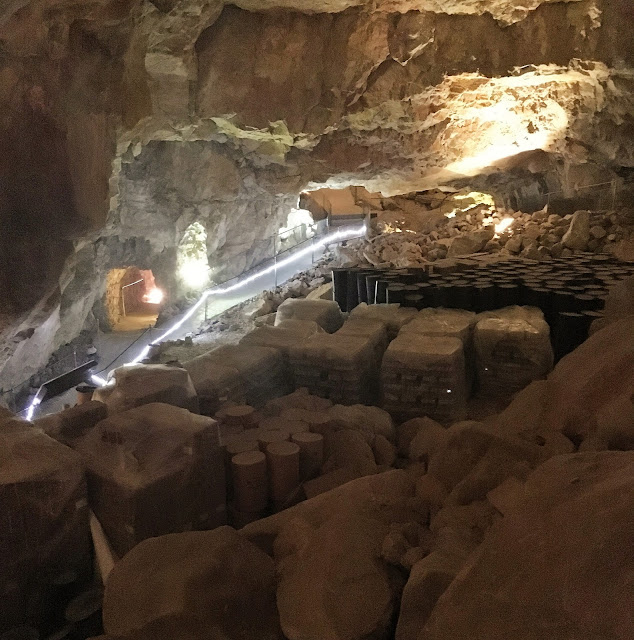 The whole tour took a little over 45 minutes and was quite informative.  The cost was under $35.00 for the two of us including taxes.  I would recommend this to anyone passing this way on Route 66.

Next stop was Seligman.  This is supposedly a Ghost town, but sure has a lot of tourist traps for everyone.  We didn't have a lot of time so the girls cruised quickly through a couple stores before we moved on. 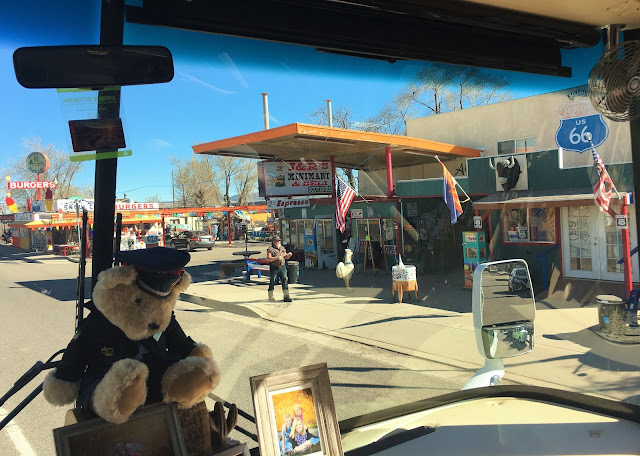 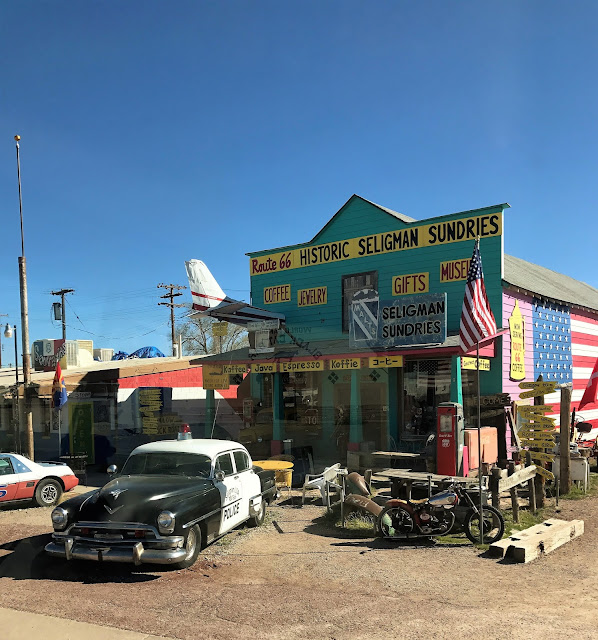 Harold and I checked out the jail.  We can only imagine who darkened these doors. 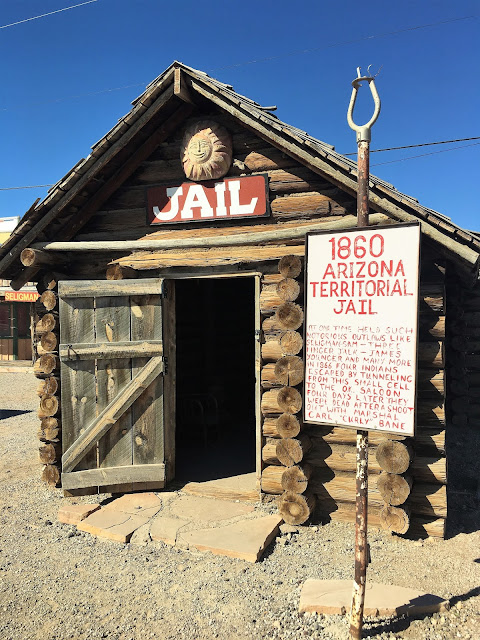 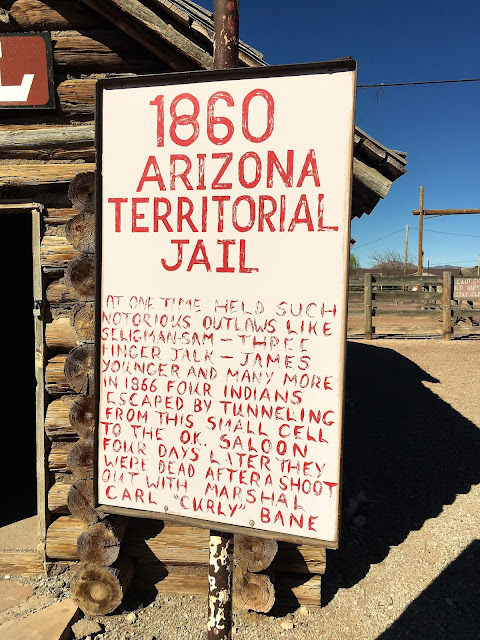 Our final destination today was a boondocking spot just north of Williams AZ on highway 64.  When we got to it, it was obvious that there had been a lot of snow there and it still wasn't dried up very well.  We had to be really careful getting to our site and watch for water puddles and mud and rocks. 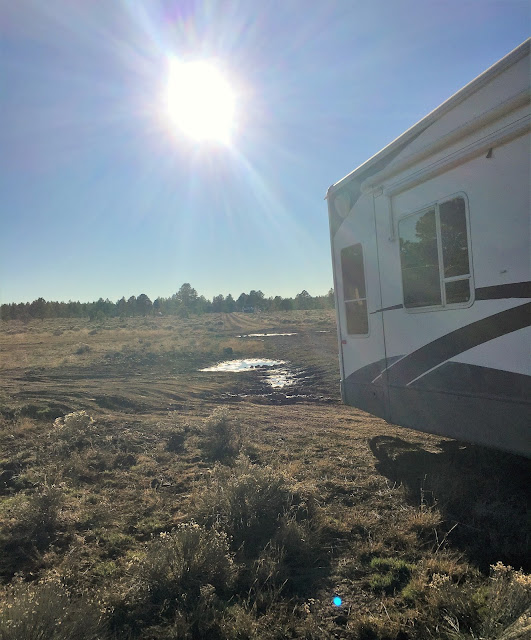 But when we got all settled in, it was well worth the troubles.  Reminds us of camping back in Manitoba with all the trees and grass.  Really pretty spot. 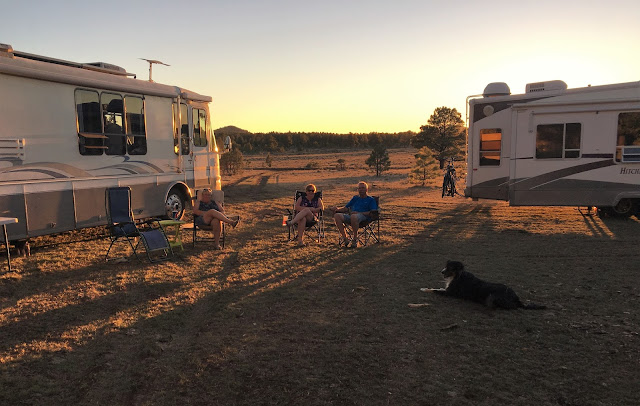 We had a wiener roast for supper and retired early because it got quite chilly, even with the fire. 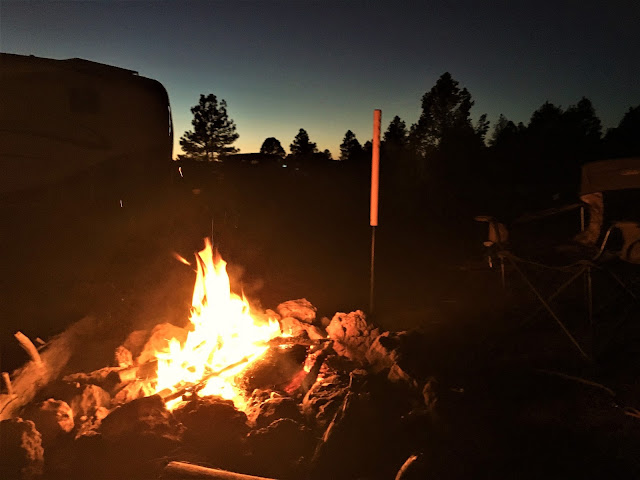 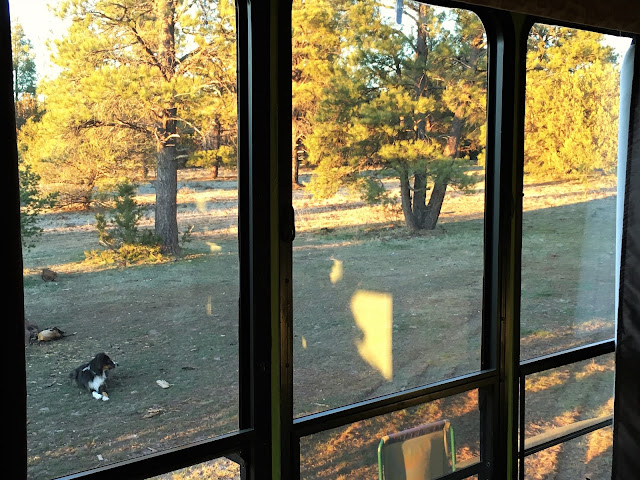 Posted by Lorne Green (A Place Called Away) at 22:08:00
Email ThisBlogThis!Share to TwitterShare to FacebookShare to Pinterest