Everyone needs a Buddy

Last night was a perfect sleeping night.  The reason I know that is because it was almost 9 am before I even opened an eye.  The ocean air does wonders for a persons sleeping.  When I awoke I could hear a dull roar outside interspersed with some clanging, and some latin music.  The oyster boats were back and they were close to the Ponderosa.  There were about 20 of them doing the oyster dance, going in circles raking the sea bottom.

A little later we saw a tug boat pushing 3 barges up the shipping channel. That is probably the longest boat we have witnessed on this bay so far.  Hope he doesn't encounter a cross wind. 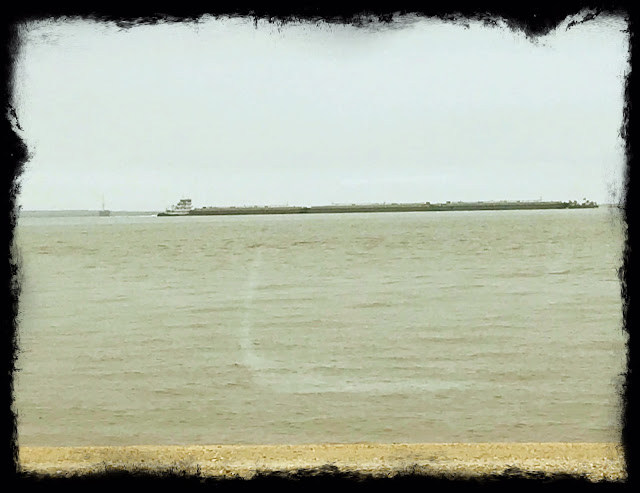 With all the rain we have had, there is quite a bit of water laying around.  The poor RVs on the right get splashed pretty good when the kids with the hot rod trucks roar through the puddle. 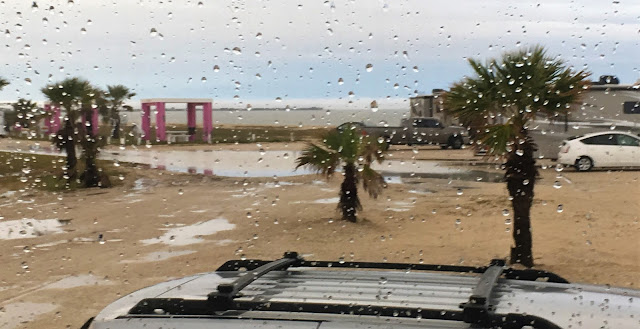 I told you we have been talking about a more efficient type of heat for these cooler humid days so we finally decided to get a Big Buddy heater which is made by Mr. Heater.  We talked to lots of people who have the Little Buddy and they are all happy, but a couple things made us go bigger.  One thing I liked was that the Big Buddy has a quick coupler for a propane line built in so we can T into our furnace gas line and run a hose off of it which will quick couple anytime we need to break out the heater.  And the second reason is that it is easier to turn down a big heater, than not have enough heat from a little one.  If you want one, they are a good deal on Amazon.  If you go through our link to purchase it, we would appreciate it. 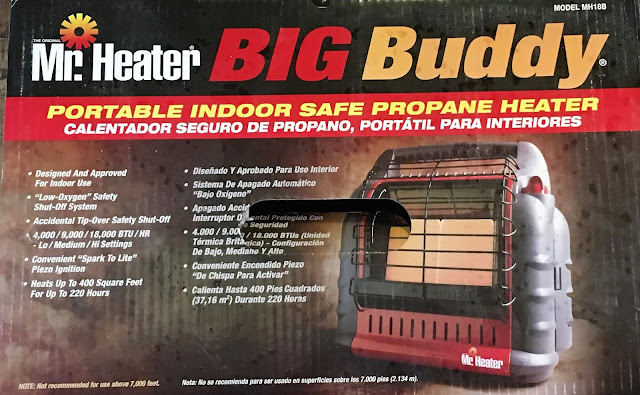 Here it is out of the package an ready to turn on.  Very simple to light, and hot so we will have to make sure it is away from flammable stuff.  Anything behind it is ok but in front and above it are the hot zones.

Now the Big Buddy comes with a 6 volt fan which can be powered by 4 D cell batteries or you can buy the 110 V - 6 V adapter  from Amazon as well.  From what I have read, the fan is a waste of time and the heater works perfectly fine without it. I tried it today and couldn't really tell the difference if the fan was on or off.  Probably better off to buy a regular fan if you want to move the air around.  Even on low the heat it puts out is quite good.  We will attach the hose to the furnace when we get one, but for now we are just running it on the little 1 lb bottles to try it out.  We do have a hose to hook it up to a 20 lb tank if we get a cold spell.

Being wet and rainy, and being on the beach produces great amounts of sand everywhere.  It is a full time job vacuuming and sweeping around here.  Charlie loves to roll in the sand and then comes in a jumps up on my chair leaving little sand dunes behind. 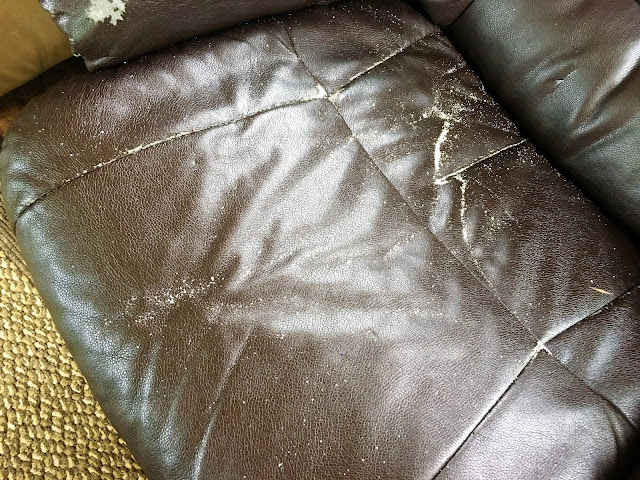 During one of the little rain showers that rolled through we turned on the Buddy heater and Charlie thought that was just great.  He snuggled up on his bed in front of it and went to sleep.  I was reminded of the poem, Night before Christmas.


Twas the week before Christmas, when all thro’ the house, not a creature was stirring, not even a mouse; (or a puppy).  The stockings were hung by the chimney with care, and the Big Buddy heater was warming the air;  Old Charlie was nestled all snug in his bed, while visions of juicy bones danc’d in his head.  When all of a sudden there was a growl and snort, poor Charlie had just woke himself and cut his nap short!!   Well it goes something like that I think!!!! 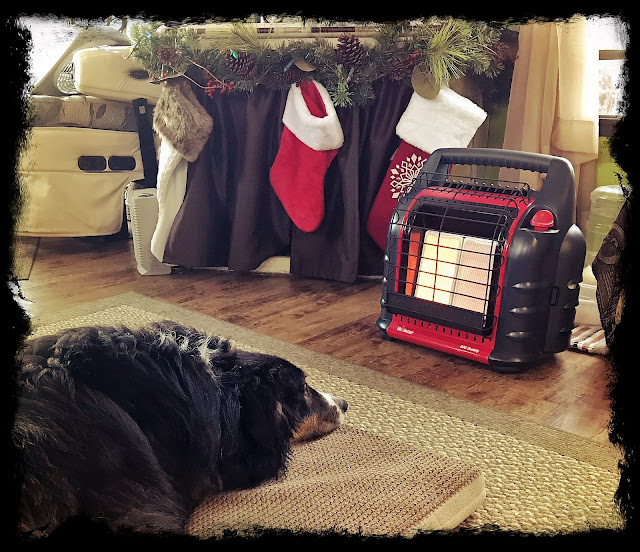 They say if your don't like the weather in Texas then just wait a minute.  We say that about Manitoba too.  Well one minute I was taking a beautiful sunset picture out the window, 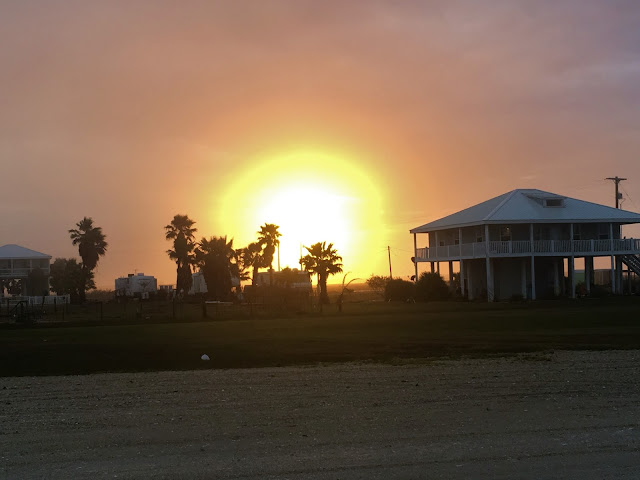 And not 2 minutes later a wall of fog came drifting over us from the bay. 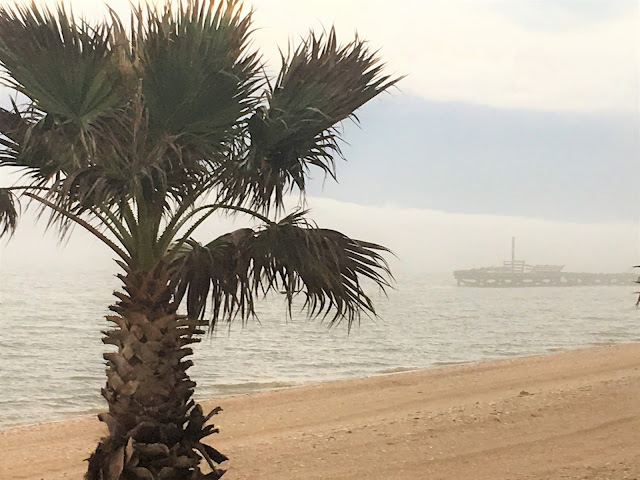 I turned back to the house and this is all that was left of the pretty sunset. 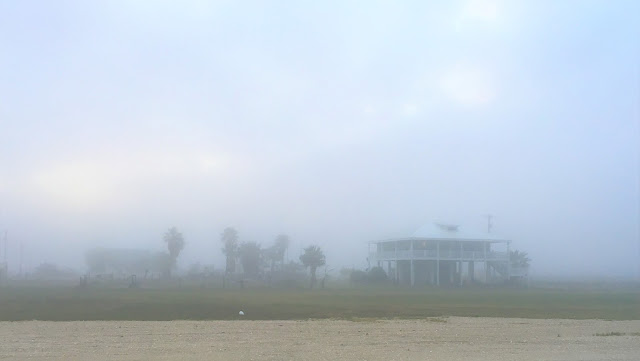 Here is the view out our window today; 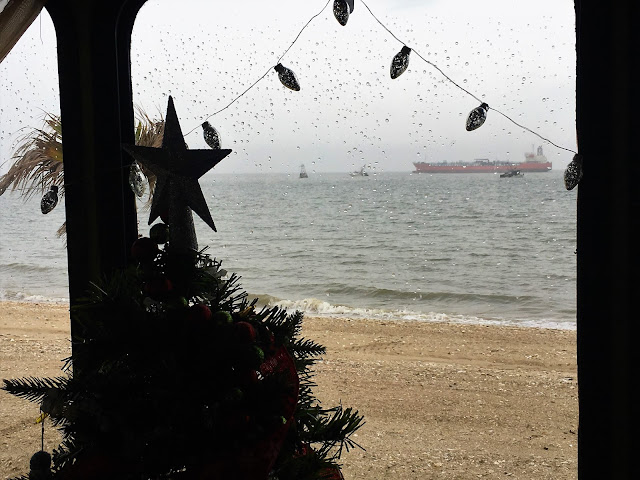 Our Location Tonight:  Magnolia Beach Texas  Boondocking on the Beach 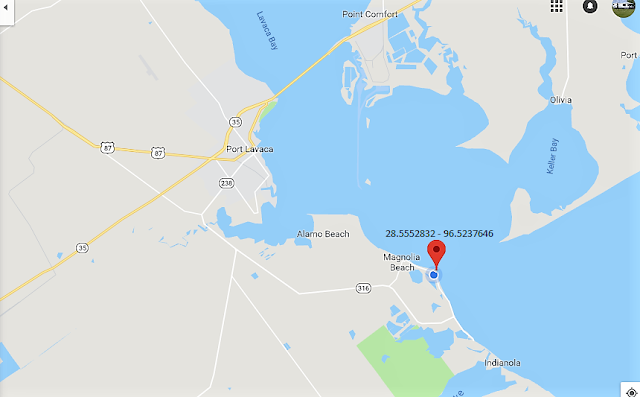 Posted by Lorne Green (A Place Called Away) at 17:38:00
Email ThisBlogThis!Share to TwitterShare to FacebookShare to Pinterest