A Trip to Guayabitos

We are experiencing a little cloud here right now.  It actually rained a little bit and they call it a significant rain if the drops connect on the concrete.  It has been 50+ days since we had rain so I guess a couple rain days are acceptable.  Actually a little moisture will settle the dust.  The daytime temperatures are 26 to 28C in the day and they are going down to high teens at night.  What a difference it makes for sleeping.  Ok enough of my whining!!  I'm guessing you aren't even listening any more!!!

Today we are joining P&H and Julie for a trip to Rincon de Guayabitos to see what they offer for the tourists!  It is about a 4 mile trip.  There is lots of stuff that nobody needs in every shop.  It is obvious that they all have the same suppliers.  This is the busy season for Mexican vacationers and the streets are full of stuff to buy. 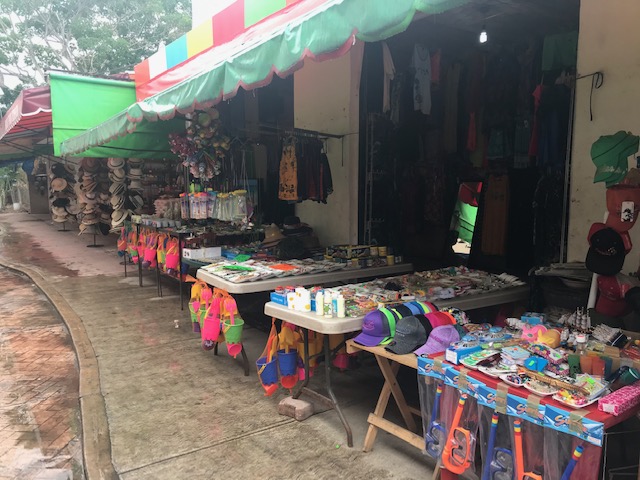 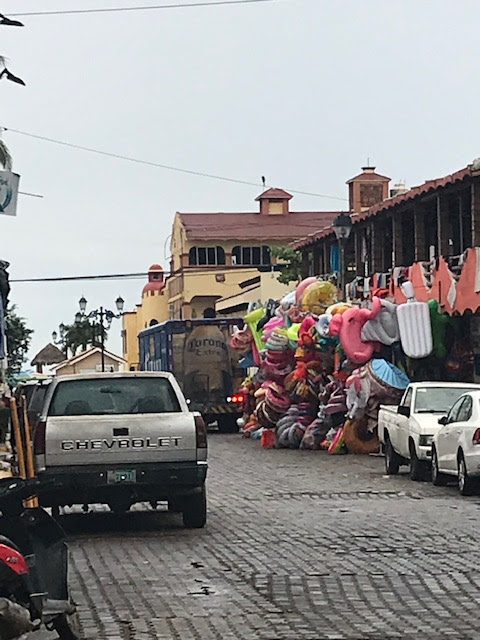 On the way there we encountered the jugglers again only this time they had included a few machete's to liven up the act.  We were in the front of the line of traffic so got a good show for only 5 pesos!! 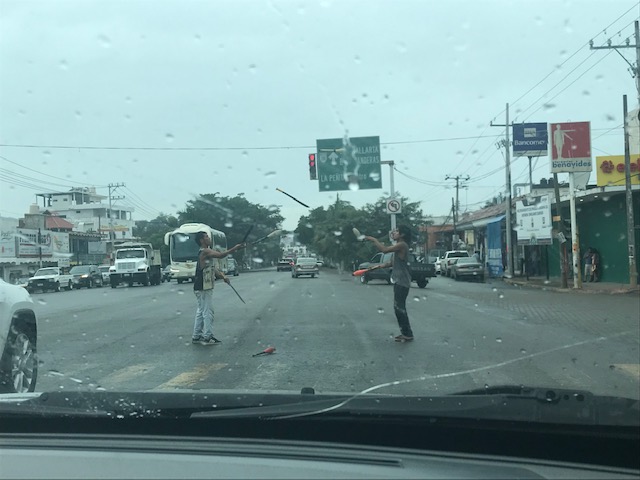 And a truck went by us with a big load of cable and a ladder.  Nothing abnormal until we saw the guy laying on the toolbox holding the ladder down and having a bit of a snooze in the rain.  I said to Sue that I could do a whole blog on the things we see down here that we would go to jail for if we tried them in Canada!!! 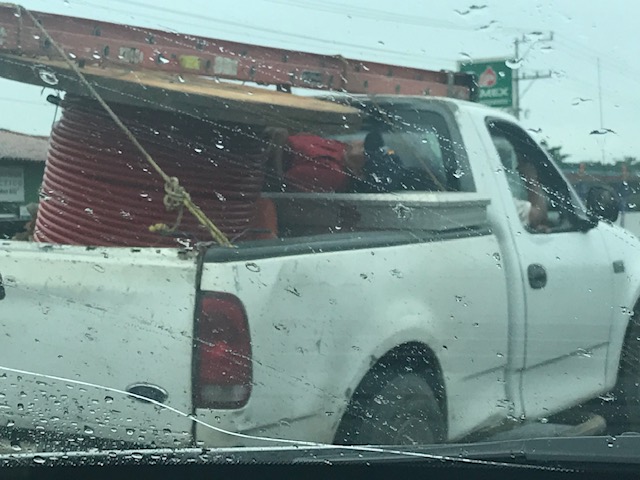 Harold and I headed down some back streets while the girls were browsing and found an old camper on the side of the road.  It looks like it had been there for a long time.  It seems you can just park your broken down stuff on the street and thats ok!!! 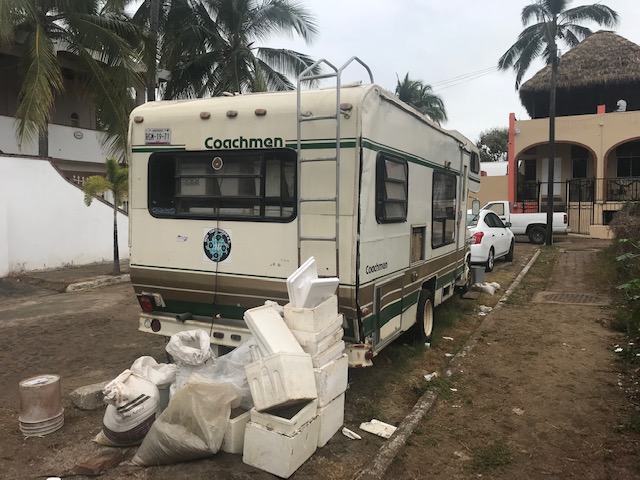 Like this old VW van that is on the main street, that has been here for a while based on all the flat tires. 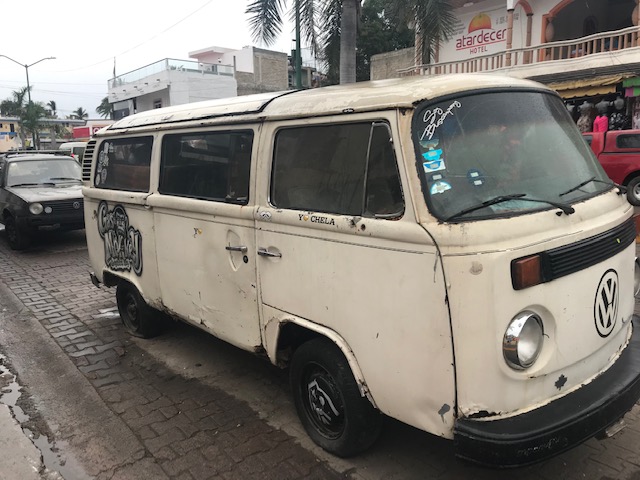 They start the kids early with fireworks.  These kids had a bag of crackers and the older kid was obviously the babysitter/life skills teacher.  He was getting the little guy to hold the crackers while he lit them and then he would throw them in the street.  Even the wee little guy did a couple.  It was fun to watch and they loved showing off for me. 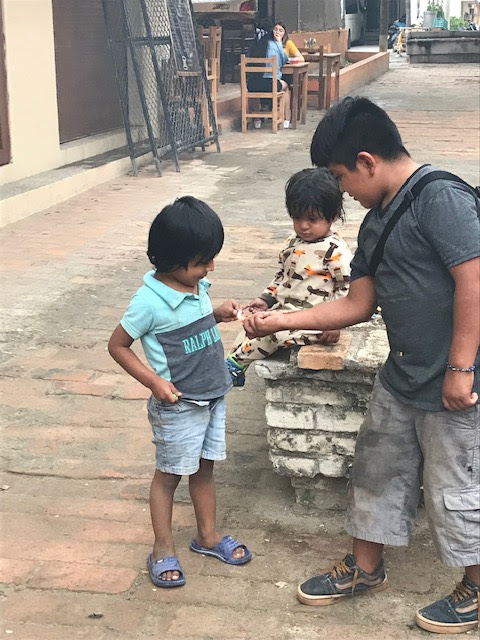 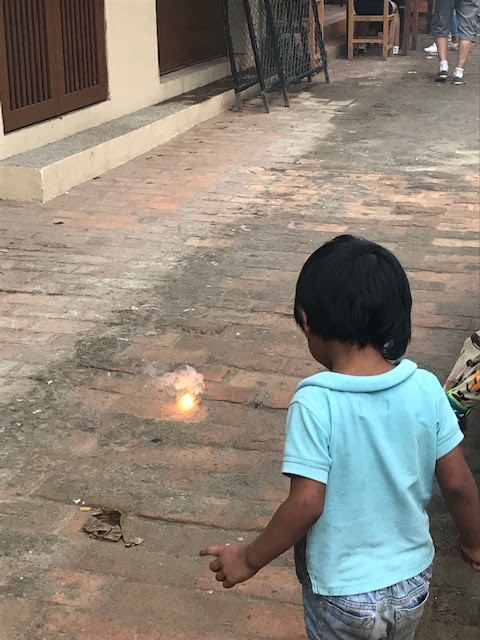 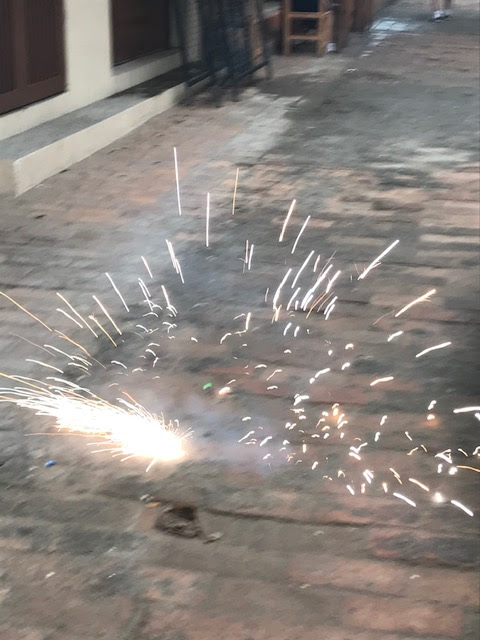 I am such a fan of the way they do things around here.  I know this is a bit dangerous, but these kids are learning great common sense skills.  They don't need a bunch of government labels or snowflakes stepping in to take them away.  The little 1 year old already knew that when he holds it and it lights, it is time to get rid of it!!  Sue kept saying OMG I wonder where the mom is??  They didn't need mom because they already knew what they were doing!!

We checked out the beach and I was surprised at the amount of people there.  There were hundreds of vendors selling every kind of food and trinkets possible.  Although it was a bit of a dreary day everyone was enjoying there time there it seemed.  Not a Gringo in sight!! 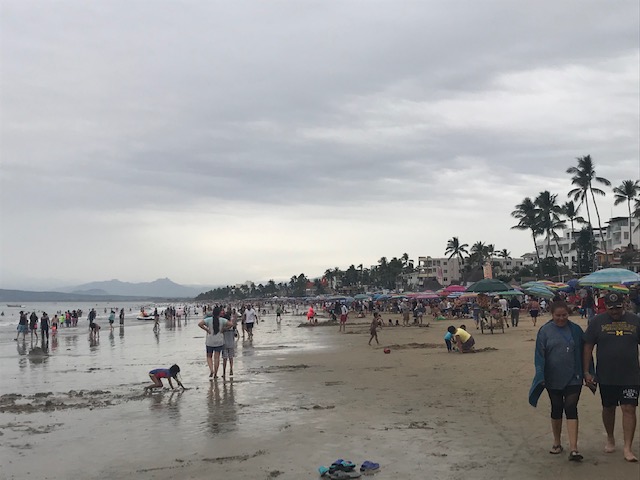 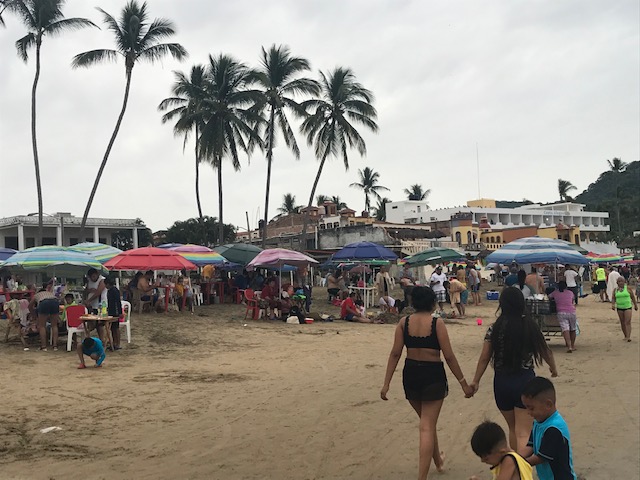 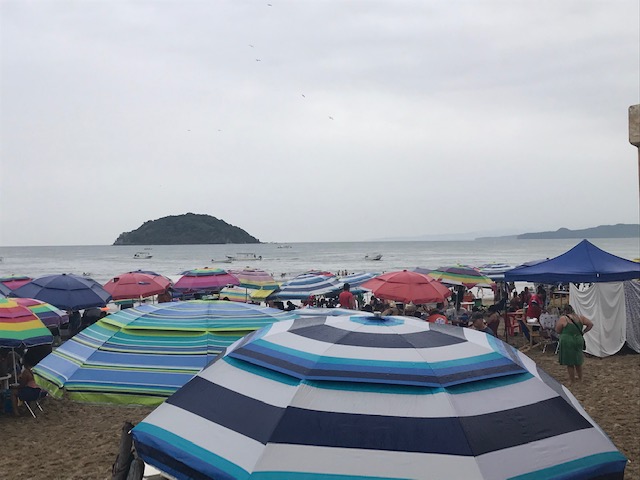 And as usual after walking the streets a person gets hungry so we had to find a place for a treat.  Sue and Pat had been to this area before so they knew of a little ice cream shop where they make the ice cream right in front of you.   So down the street we went. 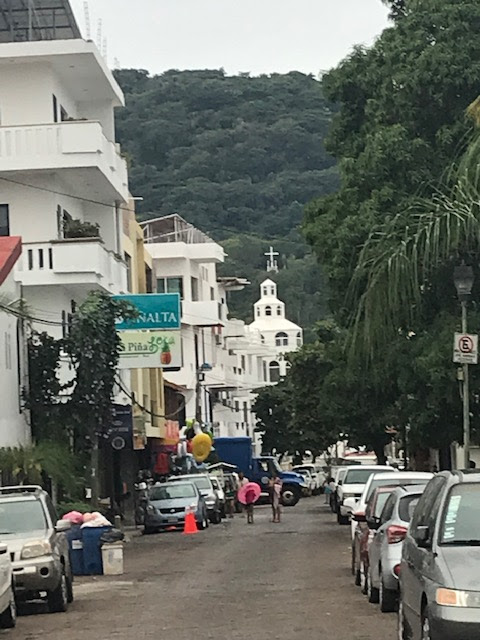 The shop was called Robbin Rollin because they make the roll up type ice cream treats right in front of you.  Here is the process on an Oreo cookie ice cream.

First you have to pick out what you want from the big menu. 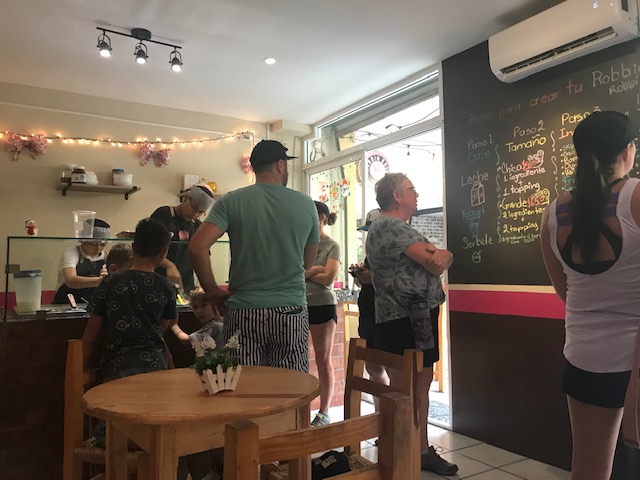 She puts some Oreo cookies on the metal table.  The table is super freezing cold by the way.  Then she breaks them up into chunks 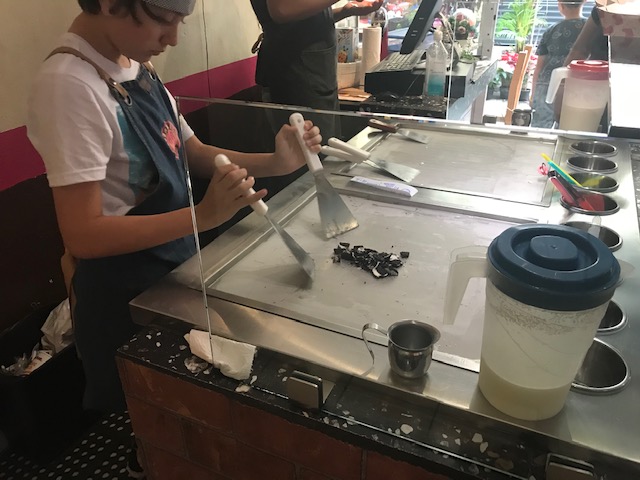 They add the ice cream mix which immediately starts to freeze. 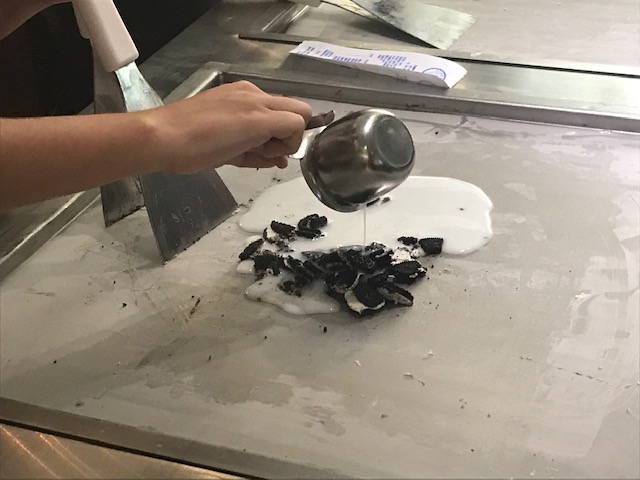 More chopping and scraping.  You can see the cream is starting to freeze already.  She works it lots with a rat tat tat action. 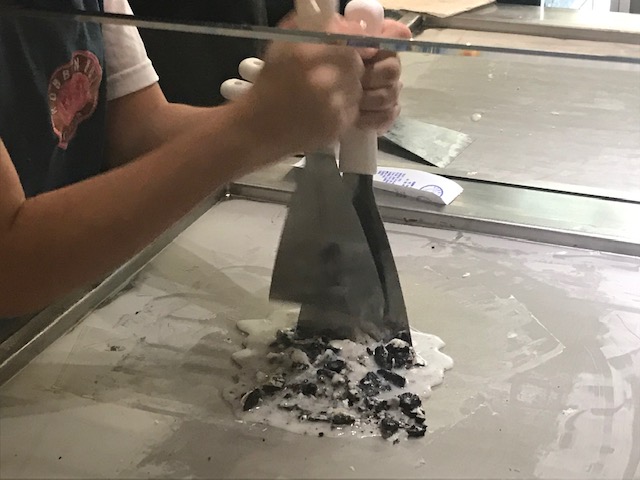 Then she spreads it all out nice and thin where it finishes the freezing process and then starts to roll it up into little logs. 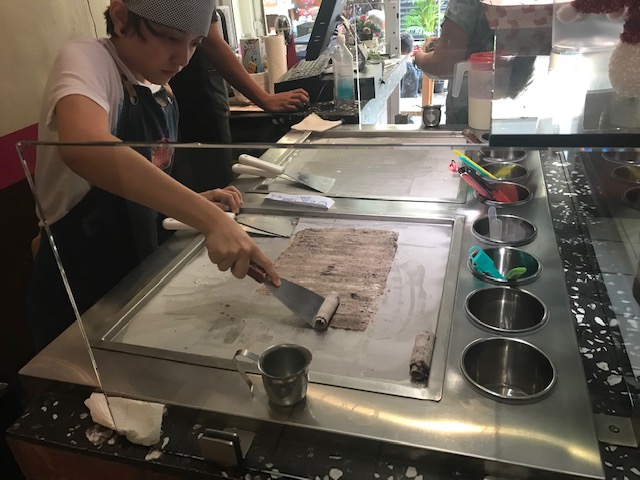 Topped with whatever topping you would like and there it is.  Julie timed the process and it took 4 minutes start to finish.  Maybe a new thing for CJ's?  Anyone want to donate $3000.00 for a freeze table? 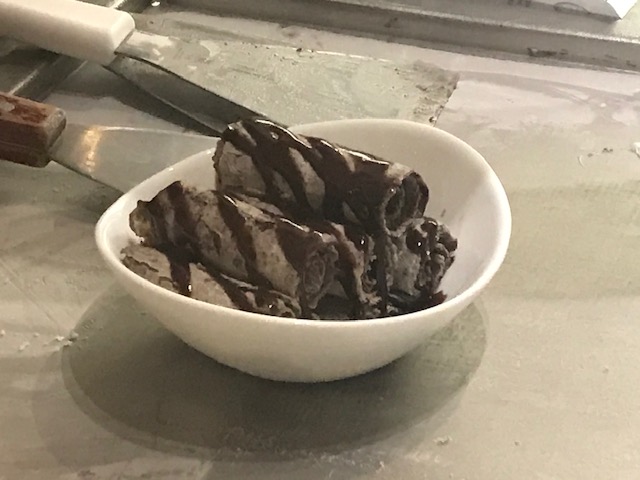 It wasn't long after we finished our treat that I heard the words coconut shrimp come up.  So we found Tonaka 11 and settled in for some supper.  We had a good meal but it was a bit expensive if you compare it to the supper we had last night.  Oh well!!! 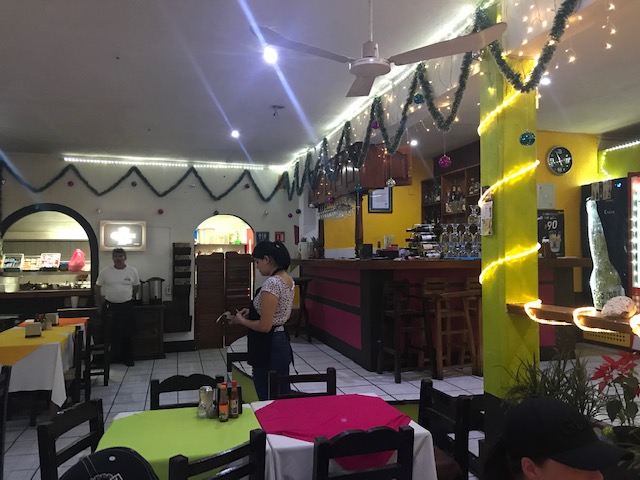 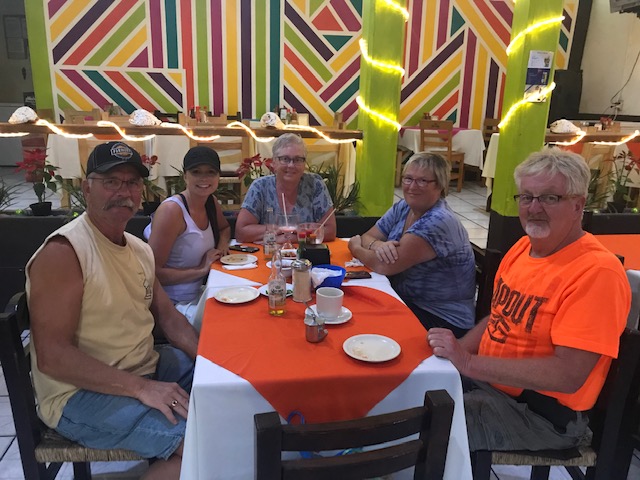 I had pescado and Sue had camarones!!  I actually have a before and after of my plate tonight.  Notice the veggies again!!  Sorry Mom!! 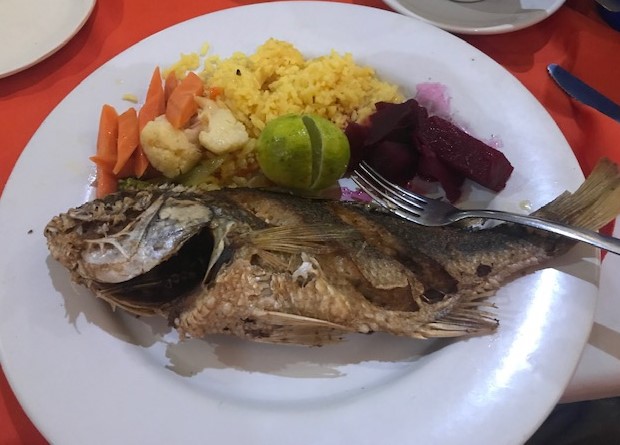 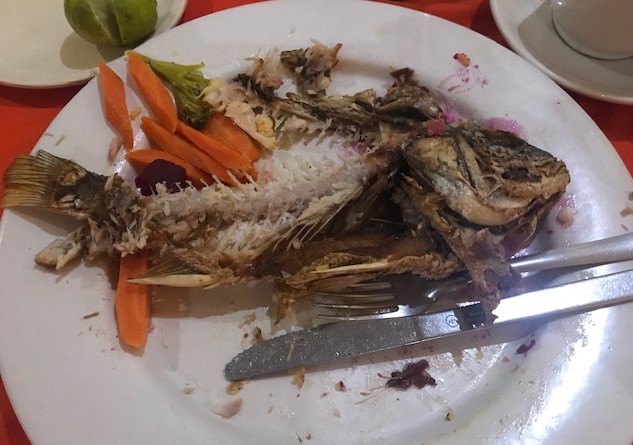 When we got home it was apparent that Charlie was not happy with our being out having supper without taking him along, so he helped himself to supper!! 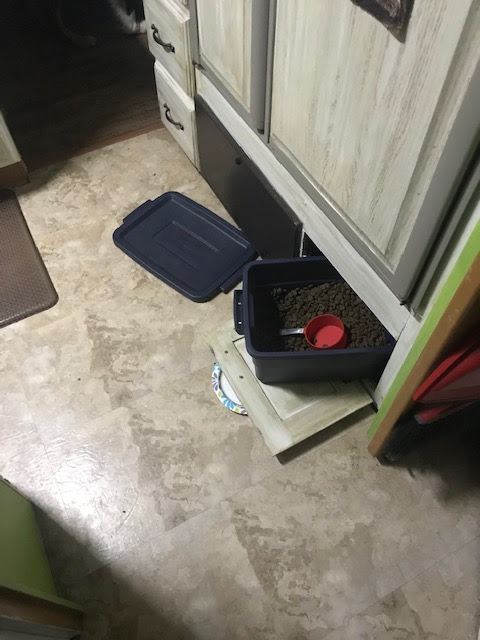 I have to share this picture of grand daughter Grace who went to see the movie Frozen.  She was so excited to see it that she had to be early.....way early...not another soul in site!!!   But she did get the best seat in the house.  Hope your day was a great one. 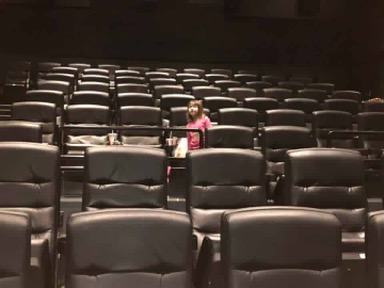 Posted by Lorne Green (A Place Called Away) at 08:15:00
Email ThisBlogThis!Share to TwitterShare to FacebookShare to Pinterest