Although we are close to the ocean, we haven't spent a lot of time down at the ocean.  I say down because we are perched on a rock about 100 feet above the ocean so it is quite feat for this old ticker of mine to drag us up and down the hill.  Lucky the road goes down to the beach so I can cheat and take the Jeep!!  Today we decided to spend the whole day down by the water with our friends playing and chatting and eating.  P & H and Steve & Julie joined us, and Paul came for a bit too.  We set up the gazebo and brought the BBQ to roast hot dogs.  And we had a big watermelon to consume. 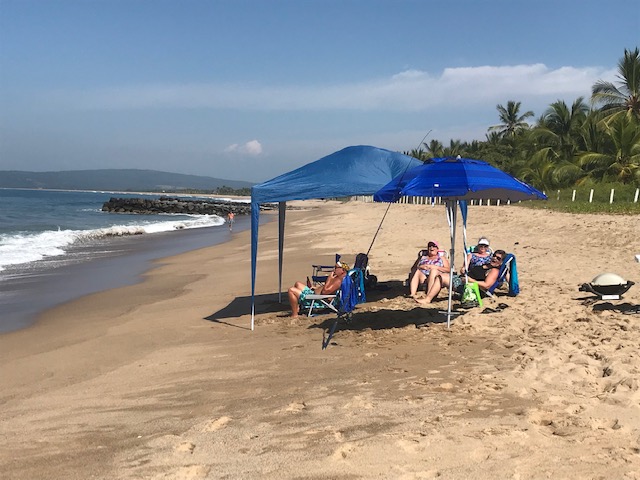 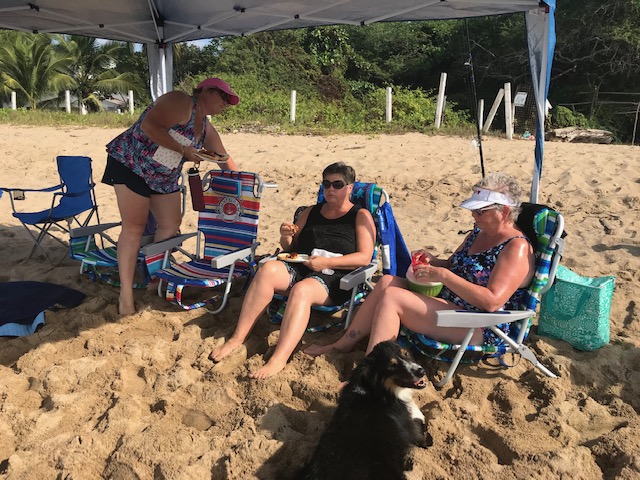 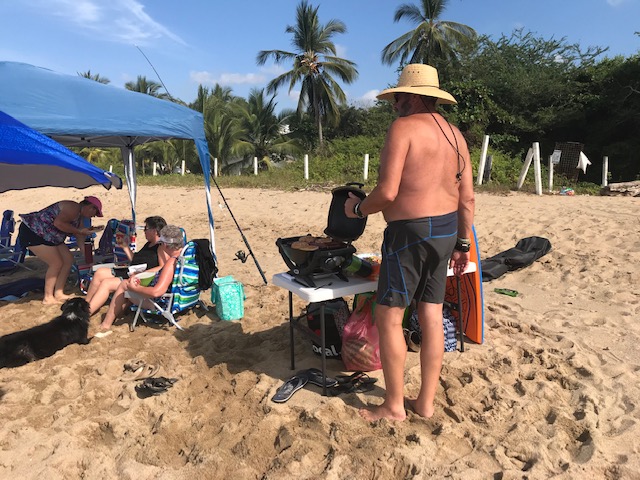 Steve did a little shore fishing with no luck. 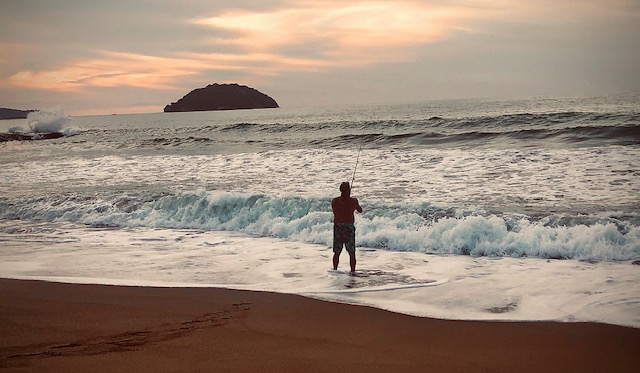 So us guys decided to go play in water for a while.  Now the waves don't look that bad but when they crest they are about 6 feet tall and the white water from them is quite powerful.  We all tried to see how far in we could go and still stand up sideways and make it through the wave.  This sequence of pictures will show you how well we did.  Guess who got bowled over!!  This is where "going with the flow" originates, because there is nothing you can do when it knocks you over than go with the flow.  It rolls you around and tosses you about and then spits you out like a rag doll.

This final picture says it all.  Steve, after being somewhat concerned for my safety finally realizes that I am fine and proceeded to howl with laughter.  He clenched his hands and almost fell over laughing.  Harold of course being the ever faithful friend is encouraging me to get up before the next one hits!!
Its amazing how much fun 3 grown men can have on the beach in Mexico!!  I thank the good Lord every day that we are getting the opportunity to be able to do all this fun stuff.

Another little story happened the other night.  There is a turtle sanctuary close by and they let the little turtles go on the beach after dark some nights.  They let the park know when they are doing it and invite us to come watch.  Well there was a strange twist to the Turtle Release that was talked about the other night.  It was to happen in the pool here in the RV Park on the night of the full moon.  Well I thought it might be fun to see but I kinda forgot about it and missed it.

Well apparently this release was not the mammals (reptiles) at all but rather the mammary type of turtles.  It is a good thing that I thought something was fishy and I didn't end up down at the pool!!  Some things you just can't unsee in life and that may be one of them!!!  They tell me there was not a great turnout and I'm happy to say I was one of the no shows!!  I think I got lucky that day.  Hope your day was lucky too!! 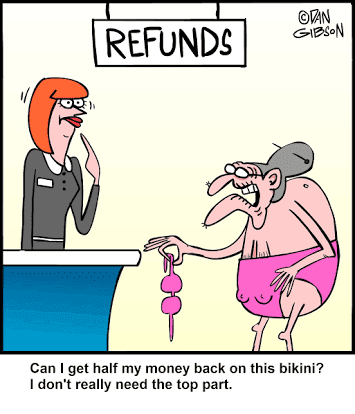 Posted by Lorne Green (A Place Called Away) at 07:34:00
Email ThisBlogThis!Share to TwitterShare to FacebookShare to Pinterest