WHERE ARE WE? Boondocking on the Wall just south of Wall SD.
NEXT DESTINATION? South
Today we decided to move over to a favorite boondocking site at the Badlands.  It is located just outside the north gate to the park and is BLM land.  You get to park right on the edge of the badlands and it is something we wanted to do while here.  When we arrived at the Badlands the other day it was raining so that is why we went to a campground to start with.  We found a spot that is level and this is where we will be for a couple days.  We did nothing but laze today so not many pictures. 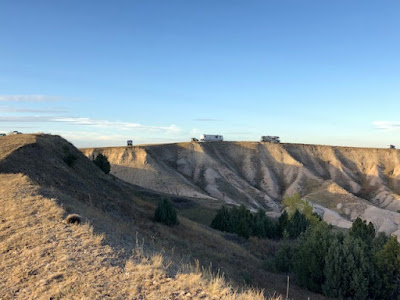 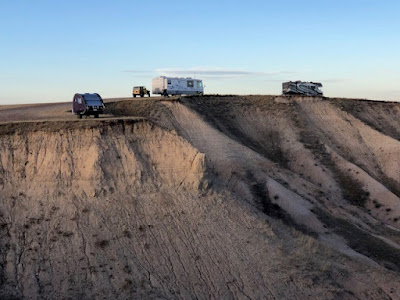 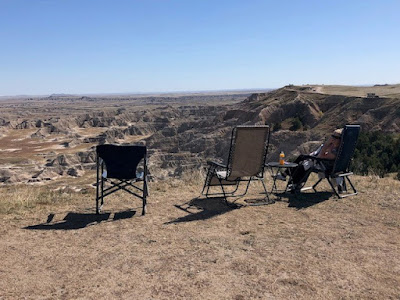 With not much happening I think it is time for a story!  (I hear all the groans!)   Susan and I went almost a year without a dog since our Charlie left us in June of 2020.  Charlie was a great dog and a good travel companion and we sure miss him. I'm glad he got to experience Mexico and I think he loved it there. 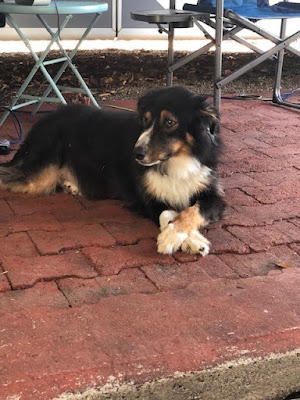 Sue loves dogs and misses Charlie lots.  Well I do too, but had always wanted to try our road life without having to worry about where to leave the dog when we did day trips.  We always worried if he was too hot or too lonely when we left him behind, so there was always arrangement to make so we could do things.  Also we had to live in an apartment last winter and dogs were not allowed so getting one was not possible until we moved out.  Sue had been doing some research and found a rescue dog near us and talked the rescue agency into choosing us as adoptive parents.  I guess we are getting a dog!  We moved out of the apartment on March 31st and picked up Sully on April 1.  He was 3 months old and was full of energy.  We were told that he was boxer mixed with lab, but when we took him to the vet to get his shots, the vet said she was sure there was Great Dane in there as well.  So much for a medium sized dog I guess.  I think the legs should have clued us in to him being a big dog.  He was 25 lbs when we got him. 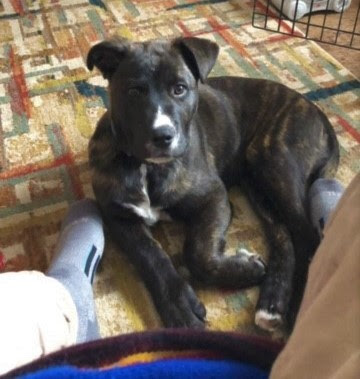 He is a cute dog with lots of smarts.  Sue did some training with him but because we were busy with the shack all summer he didn't get fully trained.   He was a good natured dog but his size and that big head and teeth tended to scare some of our customers.  He loved to lay under the deck at the shack and would poke his head out when someone went by and if they were not dog people they would have a heart attack.  And if he got off his leash, his recall was not great so we spent some time chasing him as he followed people back to their campsites.  It soon became apparent that he was a little more dog than we had bargained for, in size!!   Sue was committed to training him now that she had the time and that is one of her talents.  She is like the dog whisperer.   He sure is a pretty dog and has the brindle colours that everyone likes.  This picture is at 7 months and he is about 90 lbs. 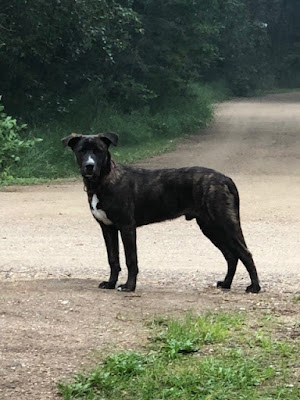 Well there were some things that happened that made us re-think whether Sully was meant for the road life.  He loves the wide open spaces and likes to run.  He needs lots of exercise and is still a growing dog.  So it happened that our daughter Kaitlyn went to her other dads farm to visit him and our youngest daughter Karalee a few weeks ago.  She lives there with her dad.  Karalee is a dog lover and due to some circumstances, one of the dogs in her life that belongs to her boyfriend, moved to a different house.  Added to that her dad lost the family dog due to old age a couple months ago so Kaitlyn said to us that Karalee and her dad were feeling down, and really need a dog on the farm.  I guess they had discussed it while she was visiting, because in a couple days Karalee texted Sue about Sully.  She wondered if he was going to work out for our travels.  We were in the planning stages of moving the MH over the border and had been trying to figure out how to get Sully across, At that time it almost looked like we may have to pay to get him flown over with us.  Then we would have to arrange to have him fixed somewhere in the USA or Mexico, and were not looking forward to how we could properly exercise him.  He needs more than just a gentle walk.  We were prepared to do what had to be done, but with this new development, we thought maybe it would be better for him to start a life with the best dog person we know.  I knew in my heart that this would be good for both Karalee and Sully, and Sue quickly agreed.  So we took Sully to the farm a couple weeks ago and immediately knew that this was the right thing for him.  He loved her cats and sat on the step looking out over his kingdom.  He loves to run beside the four wheeler and will make a good companion for Ed.  He is being spoiled with New Bothwell cheese and table scraps.  Sometime things work in wonderful ways.  I think Sully will lift their spirits and keep them entertained and will be a good friend for both of them.  We will go without an animal for a while and see what happens in the future.  We have committed to a full year before even considering anything.   So that's our story! 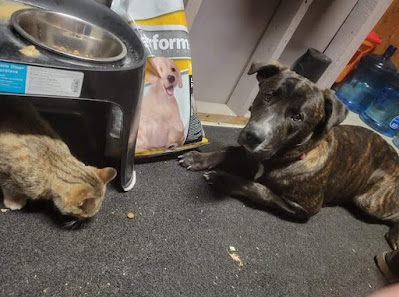 Well the weather doesn't look great for the next couple days.  Not only is there rain in the forecast, but those little negative signs by the temperature don't turn my crank.  We will see what happens tomorrow but I think it is time to migrate farther south.  We will keep you posted.

This is the view out our window tonight.  We have enjoyed our day relaxing.  Hope yours was great too. 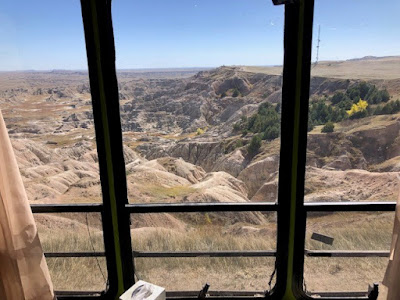 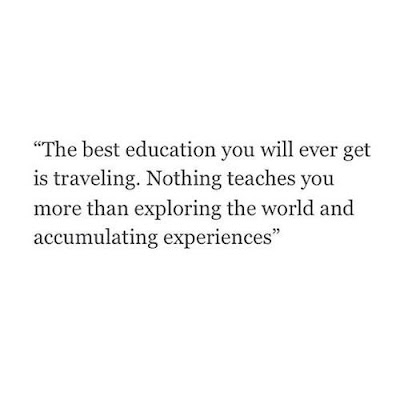 Posted by Lorne Green (A Place Called Away) at 17:15:00
Email ThisBlogThis!Share to TwitterShare to FacebookShare to Pinterest