Meeting up with Friends.

WHERE ARE WE? The Darby Ranch, Windsor Colorado
NEXT DESTINATION? West to Utah
We had a good night in the Scottsbluff Nebraska Walmart Parking lot last night and were in no hurry to get going this morning as we only had 250 kilometers to go. The sun was shining and there was very little wind so should be a good day for travelling.  Harvest in this part of the country is in full swing with lots of Sugar Beets being piled, and corn being harvested.  Some of the corn is for the seed and some is for silage. 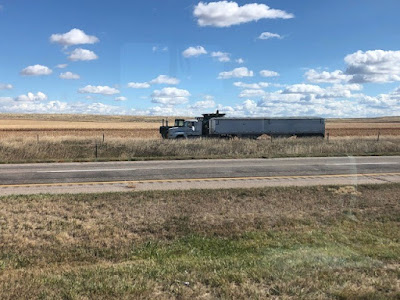 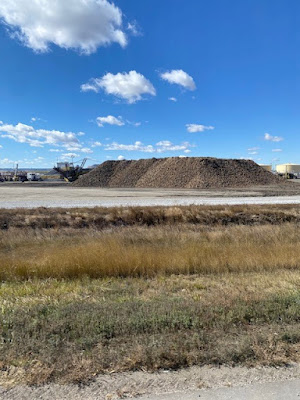 There are lots of beautiful hills on our drive today and some more jagged formations as well.  It has a good mix of cattle country with some crop farming as well. 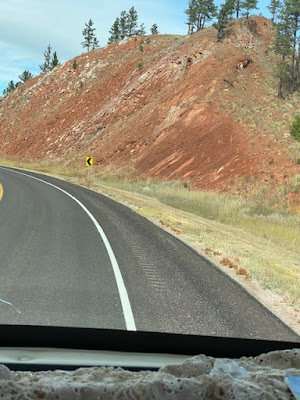 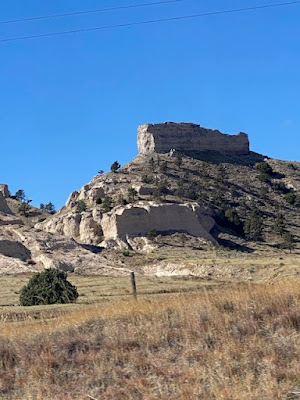 We took the road less travelled again today and enjoyed just putting along about 50 mph enjoying the countryside.  We are in no real hurry to go anywhere because the weather forecast looks great for the foreseeable future.  Our goal today was to spend some time with a family that we met almost 7 years ago while boondocking in Cottonwood AZ.   I will never forget the day we saw the big motorhome pull up near us on the desert and the people started to pile out.   1, 2, 3, 4, 5, 6, 7 people and a huge white dog!!  We were floored that anyone would have the patience to travel with that many in a motorhome.  Well we got to meet them, and it didn't take long to figure out they were different.  They have life figured out and family is of utmost importance to them.  We fell in love with the entire family on those few days in the desert and have kept in touch ever since.  We did visit them a couple of times since then as they have sold the motorhome and settled on to an acreage near Fort Collins Colorado.  A half hour before we got to their place we got a good view of the Rockies.  We will be travelling through them next week!! 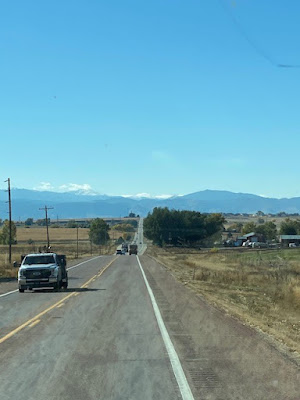 As we got nearer their place we saw some smoke trails from jets ahead and wondered what was going on?  Sorry Sue didn't clean the windshield!! 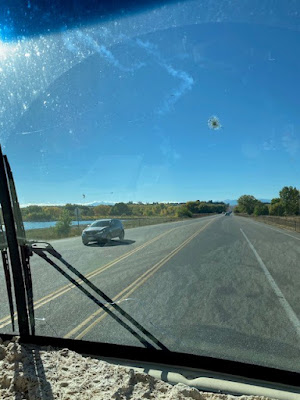 We only had a couple miles to go and when we got to their place, they hustled us out of the MH because there was an airshow going on at the airport at Fort Collins which is only a few miles west of their house.  The Blue Angels were performing and they put on quite a show for us for about a half hour.  Its really hard to get good pictures with a phone but we tried.  Although the pictures don't show it, we could see the blue and yellow of the aircraft as they turned out over us to do another pass down the showline.  The sound was incredible. 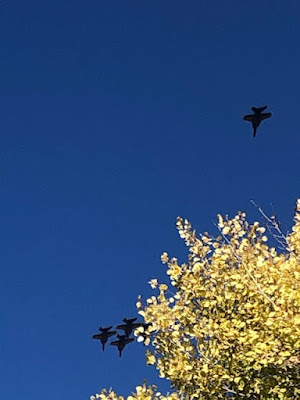 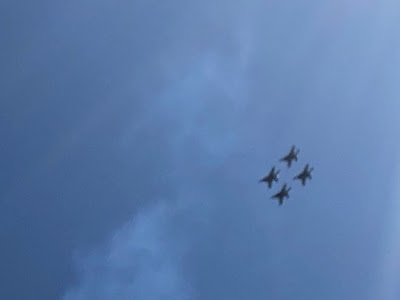 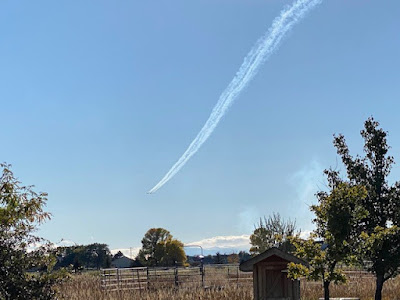 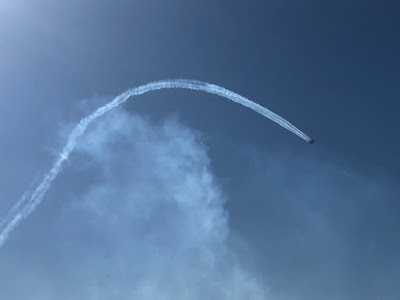 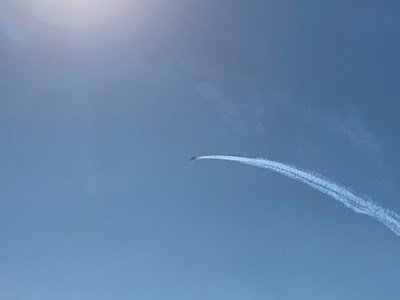 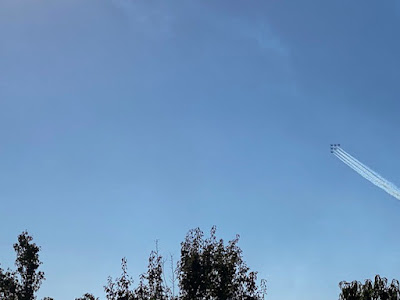 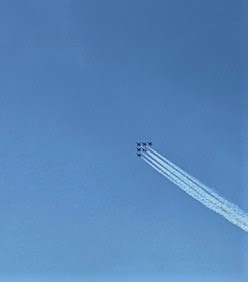 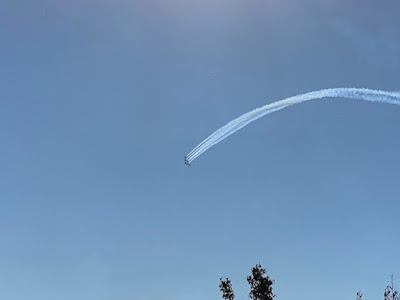 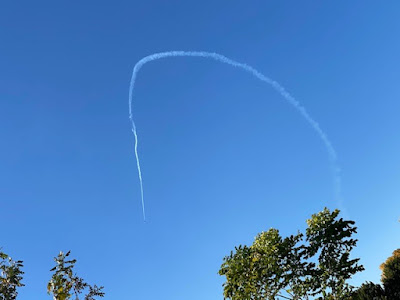 Tonight the Darbys were having a movie under the stars.   They have a big screen built and they invite people to enjoy outdoor movies with them.  Tonight they have invited the 18u Royals Softball Team to join them for the event.  They serve food and sell Royals stuff as a bit of a fundraiser for the team.  The Darby's have started and built a few baseball teams under the Royals name and they go to all kinds of tournaments.  Dave and Julie, and now their family, are born to mentor.  They do it for a living as well with lots of online mentoring.  They are very caring and do a wonderful job of what they do.  The movie was supposed to be outside but it was a bit chilly tonight so we all moved into their shop/barn. 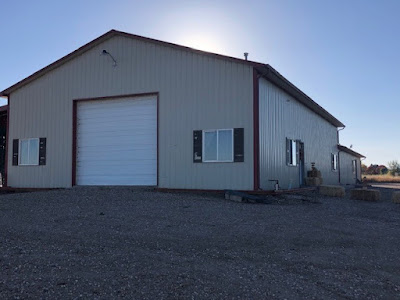 They had some games, painted some pumpkins, and honored their players and retiring players before the movie. 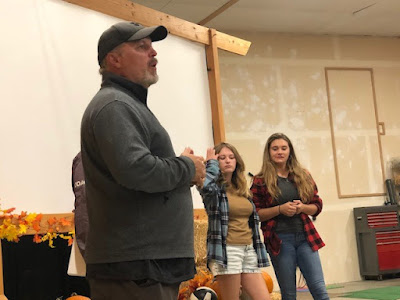 Dave and two of his daughters, Lauren and Nichole.  Dave is a man of deep thoughts and emotions and enjoys encouraging everyone as much as he can.  Here he is honoring his daughters for their devotion to the club and the game. 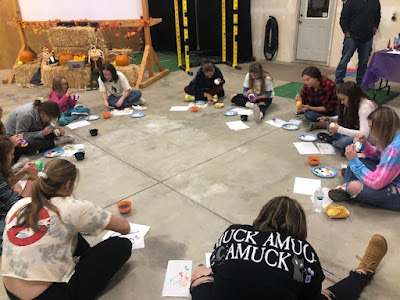 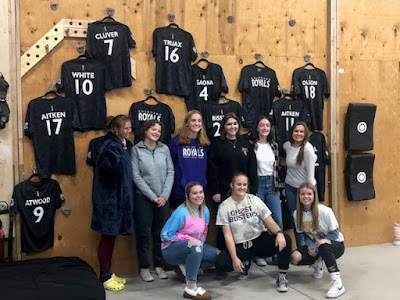 Dave and Julie and a couple of the coaches. 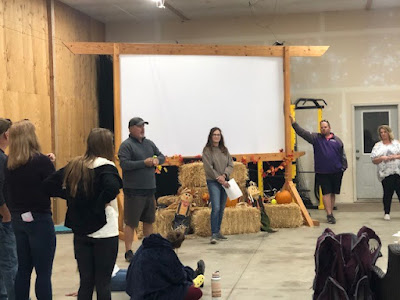 Here is Nichole receiving her home plate on her retirement from the team. 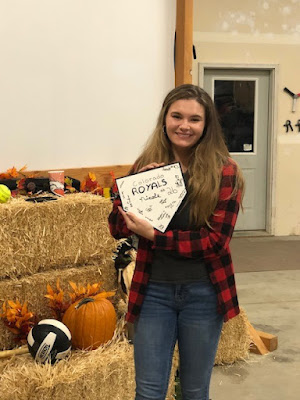 And 3 of their 4 daughters posed with their painted pumpkins.   Nichole, Lauren, and Olivia. 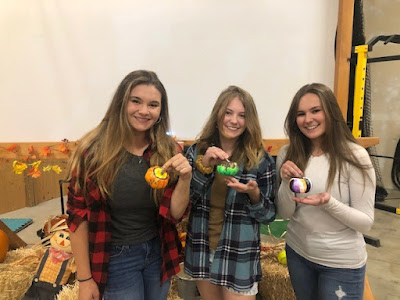 Way back when we first met the family, we fell in love instantly with the two youngest of the family.  They were hmmm I'm gonna say 8 and 10 years old.  They have grown and yes they still have a special spot in our hearts.  Emily and Olivia posed for a picture tonight. 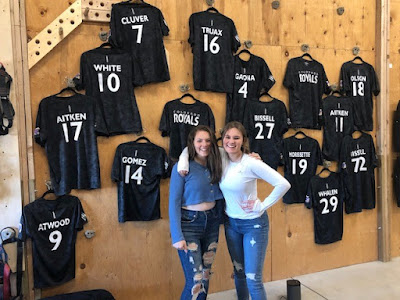 I don't even know the name of the movie we had, but it was about women playing baseball back in the 40's when the guys went to war!!!   I did stay awake for the entire thing which is something for me!! 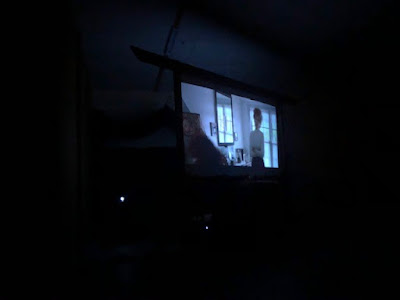 We will be watching Emily play ball tomorrow in a tournament, so there will be lots more about her.  I will also get some pictures of Jonathan as well.  One of the things that are important to the Darby's is the fact that there are no free rides in life.  You need to work for what you want and work hard.  They recognize that everyone has different goals, but there must be a goal, and you need to do whatever it takes to get there.  I think this picture sums up something that a lot of the world in now lacking.  These medals were earned!!! 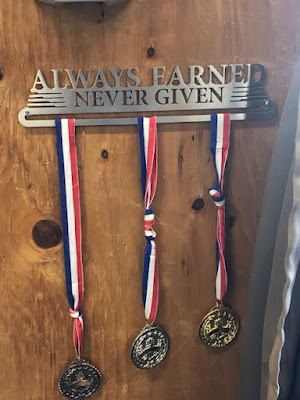 Well we are parked up in their yard for a couple days while we enjoy being a part of all of the activities that are happening this weekend.  Like I said a ball tournament tomorrow and then we will either play more ball on Sunday or just chill in their yard or both!!
They have a beautiful yard and we are parked over behind the house. 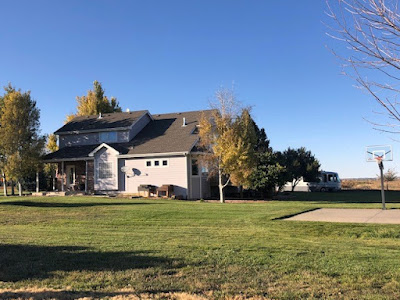 The view from our window tonight is of the Darby's back yard where we are parked.  I hope you had another fantastic day.  We did! 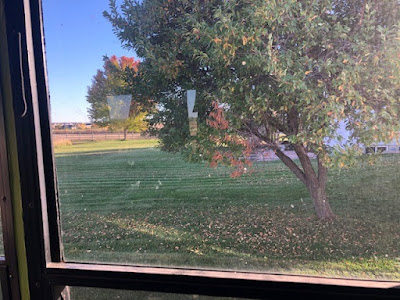 Posted by Lorne Green (A Place Called Away) at 22:57:00
Email ThisBlogThis!Share to TwitterShare to FacebookShare to Pinterest