Spending a Little more of the Kids Inheritance!!!

WHERE ARE WE? BLM land outside Apple City Utah
NEXT DESTINATION? Poverty Flats, Nevada
Last night on the highway coming into Richfield I observed a slight thumping noise.  I hadn't heard it before but there were cracks in the highway so I thought we were just going over them.  This morning when we were getting ready to head out I did the normal walk around, but remembered the thumping so I did a little better inspection of the tires than normal.  Low and behold the front passenger tire had separated in a couple spots which left a lump on the tire. 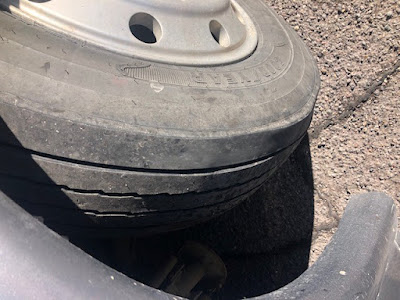 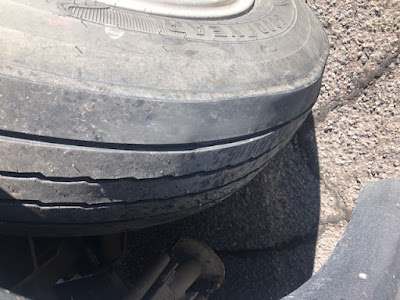 Wow that is a lucky find but a bit scary because we had just gone through some crazy mountain curvy roads yesterday.  Glad it didn't decide to blow on us while we were driving. So off to find a tire shop. We found Big O Tire and pulled in. 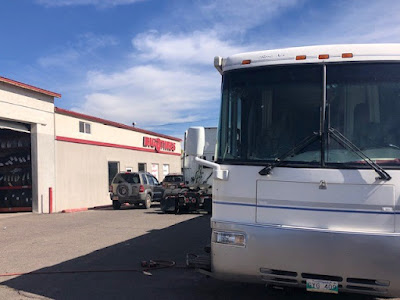 Good news is that they have a pair of tires in their warehouse but the bad news is that they are not cheap.  We have to have a pair because we had a weird size on the front so we can't just change one. So we are changing them up to a regular semi tire that you can find anywhere, even Mexico!!  Nothing a couple grand won't fix!   Well new tires were in line anyway because the old ones were made in 2014 so that is 7 years!!  In case you don't know how to tell the manufacture date, the markings on tires have 4 numbers.   The first two are the week of the year and the second two are the year that they were made.  This tire was made in the 25th week (mid June) of 2014.  Our new ones were made in July of 2021. 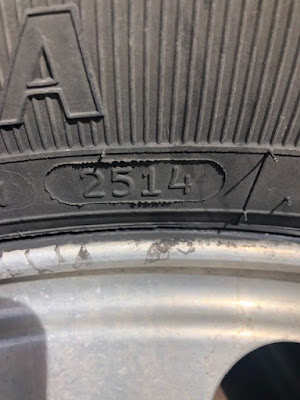 So the guys got busy changing the tires.  They put a kid on taking the tires off and he couldn't get the lug nuts off.   He got quite frustrated and threw his air gun and swore and left. Remember this action for later in the post.   Another guy showed up and got the big air gun and off they came. 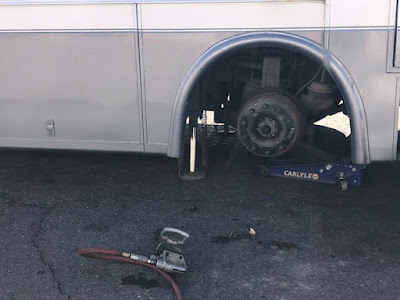 Then they put the same kid in charge of getting the tire off the rim.  He couldn't get it off and was throwing the tire and rim on the ground scratching and putting divots in the chrome.   I had to go outside and reprimand the guy for not using a mat to protect the chrome rim while changing it.  Although they post a notice saying they are not responsible for damage, I told him that it didn't give him the go ahead to cause damage.  I immediately got the manager and a mat and some cardboard showed up.  About that time the kid disappeared and another guy took over. 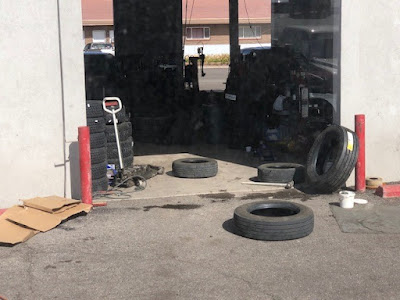 The rest of the change went good with the new guy in charge.  I took a walk around to the drivers tire and noticed oil on the ground.  I guess when the kid took a fit he busted  the oil cover on the wheel.  I was not happy and got the manager again.  He never said a word other than bowing his head and saying sorry, I will fix this. 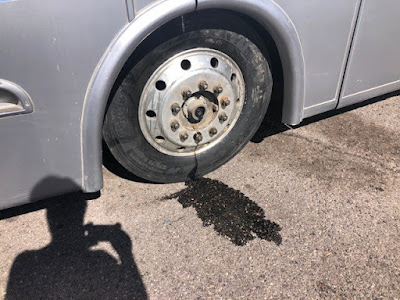 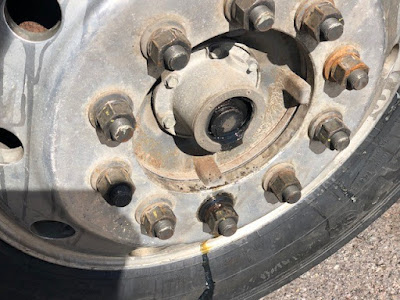 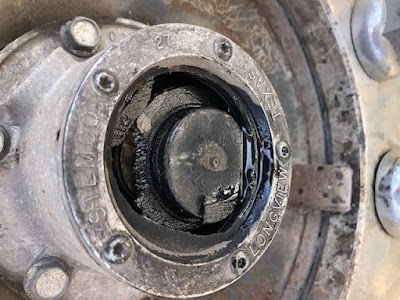 After a while their mechanic showed up with a brand new cover and installed it.  A job that should have taken an hour total ended up taking 4.   About 2 pm we were on the road again.  Before leaving I had a little chat with the manager and asked him kindly to invest a little training in the kid.  He had lots of energy but had no idea what he was doing or what tools to use.  The manager admitted that they didn't train him very well.  Kids just don't automatically know how to do things, it is up to us to teach them. 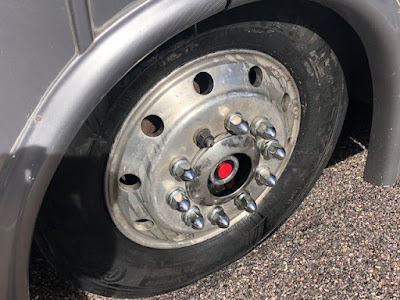 The day turned awesome very quickly.  We headed down #89 highway and soon were swallowed by mountains and the most gorgeous scenery ever.  I am so thankful that we get to see these marvelous things almost every day. 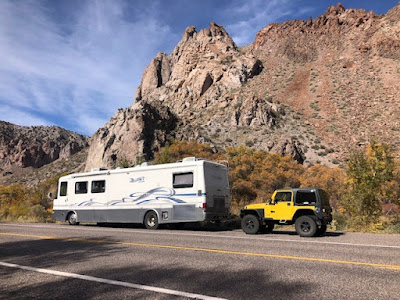 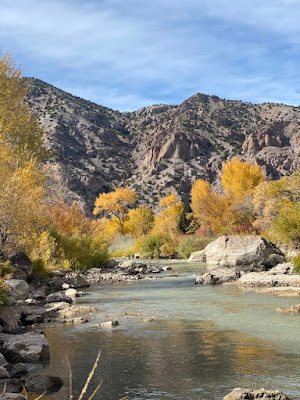 It was a nice slow drive for a lot of miles so I got to look around without both hands gripping the steering wheel to keep us from careening over some mountain cliff. 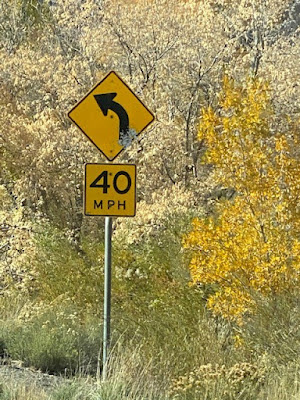 We stopped to see the place where Butch Cassidy grew up.   A nice little cabin in the woods that has been recently turned into a really nice historical display. 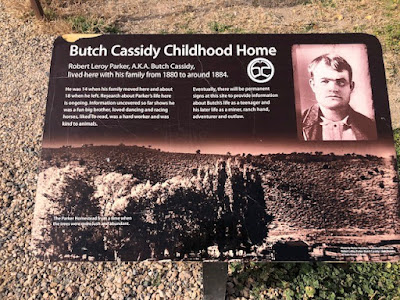 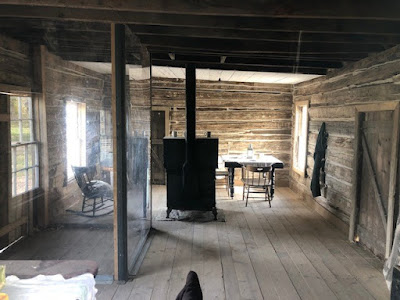 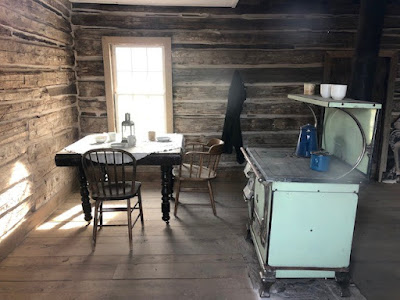 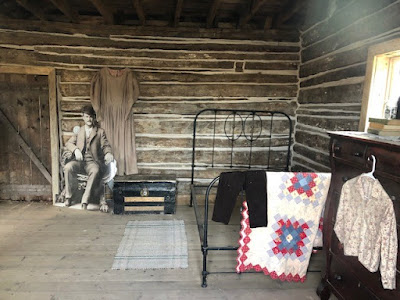 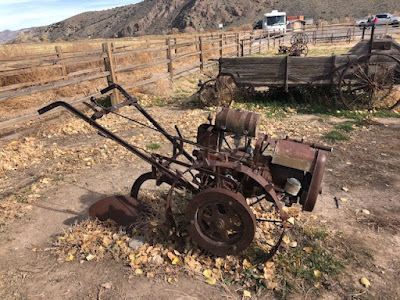 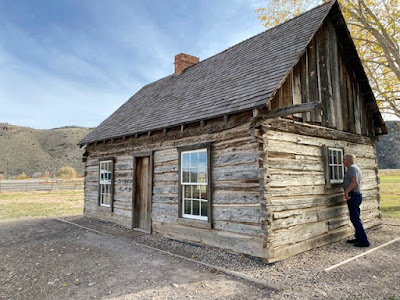 We had a great drive today and will be at our first destination in Nevada tomorrow.  We plan to put our feet up for a while because we will be getting some 28 and 29c days.  Today we drove a little over 300 kms. 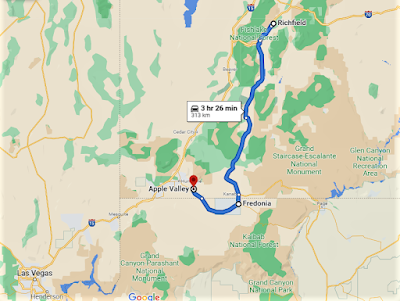 We hope you had a great day and to my friend at home who had a bad day, I hope tomorrow is uneventful.  Here is the view out our window tonight. 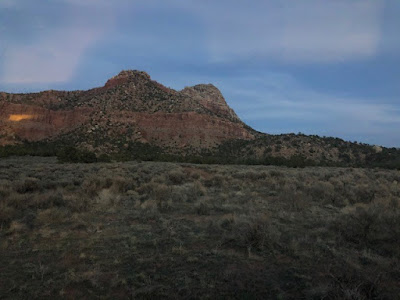 Posted by Lorne Green (A Place Called Away) at 20:41:00
Email ThisBlogThis!Share to TwitterShare to FacebookShare to Pinterest