A Little About La Penita

Sunday was a quiet day here with nothing out of the ordinary happening.  We sat around and visited and then it was washer toss which we did not do this week.  Then Sue and I worked at burger night.  A little bit of music afterwards and home to bed.   Days like this make it tough on a blogger because there is still need for a blog but nothing of interest to put in it.  Maybe it is time to do a little review of where we are and what is here.  I know many are watching our Mexican adventure because you have a little urge to experience it and others are following us because you still think our demise at the hands of the cartel is bound to happen and you don't want to miss an exciting story!!!  LOL.  We stand a better chance of being hit by lightning than that happening I'm afraid. 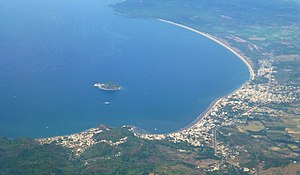 Aerial view of La Peñita de Jaltemba in the center of the bay, Rincón de Guayabitos near the center, with Las Ayala on the bottom left, and the Isla Coral out in the bay.

I copied this from wikipidia because it gives a good overview.
La Peñita de Jaltemba, commonly called La Peñita, is a small authentic Mexican fishing town in Nayarit, Mexico, with a population of approximately 20,000 inhabitants. It is located on Jaltemba Bay, 64 kilometers north of Puerto Vallarta at kilometer 90 on Mexico Highway 200.
The surrounding area is noted for pineapple, banana, mango, and other fruit production. The main street, or "La Avenida" as it is known, runs east–west from the highway to the beach and has a central boulevard lined with palm trees and benches. A number of tourist shops, clothing stores, shoe stores, restaurants, and other merchants face the street. Two blocks south of the beach end of La Avenida there is a large shady plaza. Each Thursday, a four-block long tianguis (street market) takes place in La Peñita de Jaltemba. This market sells a wide range of goods, from fresh fruits, vegetables, and seafoods to housewares, clothing, hardware, and arts and crafts.
It is the main service community for the busy resort of Rincón de Guayabitos immediately to the south. The two communities are separated only by a narrow river. Rincón de Guayabitos is a community of hotels, bungalows, small tourist shops, and restaurants, while La Peñita de Jaltemba provides banking services, grocery stores, and vegetable markets, as well as public facilities such as the library and post office

We have found that we are not really considered tourists here in La Penita, but rather the locals soon recognize us as longer term temporary residents of the area.  Because of that we are treated just a little different than the tourists which is nice.  We don't always get charged the gringo prices anymore but you still have to be aware of what things are worth.

The weather in La Penita Mexico is generally warm with temperatures averaging 28C.  This particular area has over 320 days of sunshine each year with most of them in the dry season which occurs between November and May.  The rainy season which runs from June to October has temperatures in the 32C range with very high humidity.  In these months they receive between 13-35 centimeters (.5 to 1.5 inches) of rain per day.

The History of La Penita goes back when in 1938 a 7700 hectare parcel of land was established by the government as the Ejido de La Penita (communal land shared by the community) and was shared by 154 ejido member.  In 1958, and additional 4948 hectares and 49 members were added to the ejido and it has grown from there.  Back then some had small fields of beans, corn, chiles, and tomatoes and there were orchards of pineapples, bananas, mangos, and other native fruits and vegetables.  The area was also identified as a good source of fishing income for the residents.  There is still agriculture around the area.

Several years later in 1963, Highway 200 was built which improved access between Bahia Jaltemba Bay, Compostela, Puerto Vallarta, and all the towns in between.  With that highways completion the tourists began to move farther north from PV and there are nice hotels and vacation resorts all the way from Rincon de Guayabitos to PV.   Although tourists add to the local economy, they do take over the area and the authenticity of old Mexico is lost.  That is starting to happen here however La Penita is holding on to tradition as much as possible.

It is said that if you visit and stay long enough, the rustic, historic beach town of La Penita will win your heart.   And that is where we are right now!!  In love with La Penita!!  So if you are ever considering Mexico in your RV, consider this area.  It will win your heart.