Dancing the night away!!!!

We just saw some pictures from home on Facebook and it was a gentle reminder that although we do not miss the cold and snow, there are still some beautiful things about winter.  One of those things is the hoar frost.  This is what it looked like looking from a friends house across the lake to where CJ's is located.  I don't think Ice Cream sales would be too good today 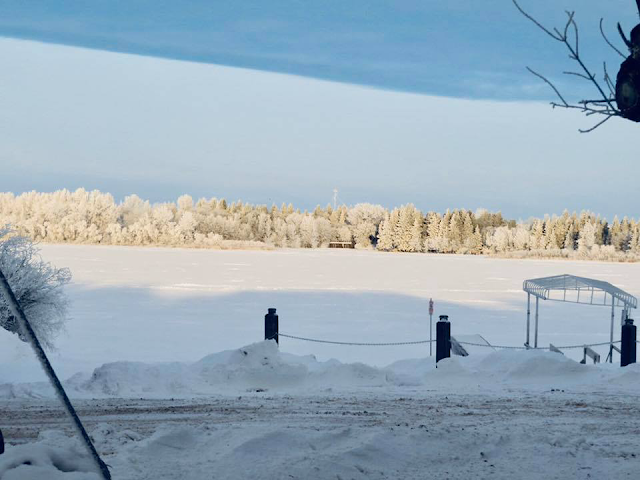 And some more random pictures of the hoar frost near where we live in the summer.  So pretty.  Thanks Dave and Donna Falkevitch for not sending me to jail for using them!!! 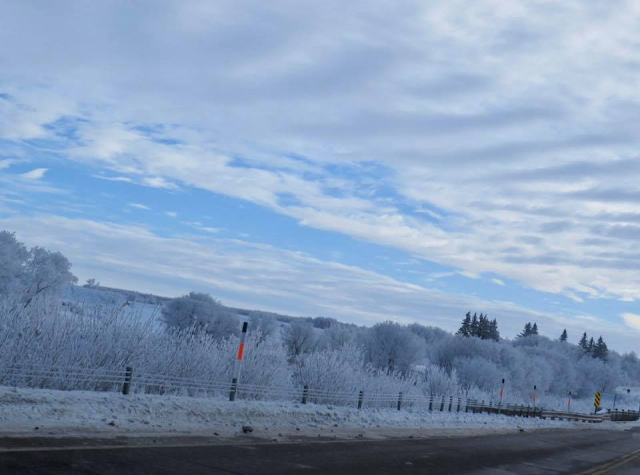 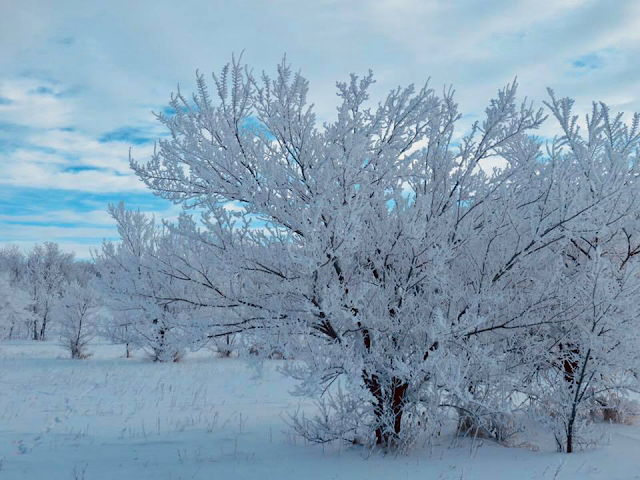 Susan and I had to go down to Guayabitos to pick up something so I got a shot of the town sign in the square.  I love that they are so colourful.  Not a great picture I know!!! 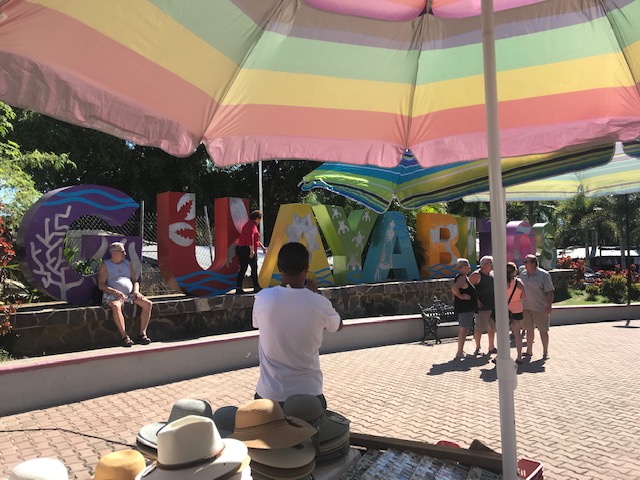 We got together with some friends tonight and headed out on foot down to the Las Brisas restaurant.  Monday nights they have entertainment so everyone wanted to go dancing.  Notice the picture is from the back because we were going, not coming!!! lol.  I just take weird pictures!!! 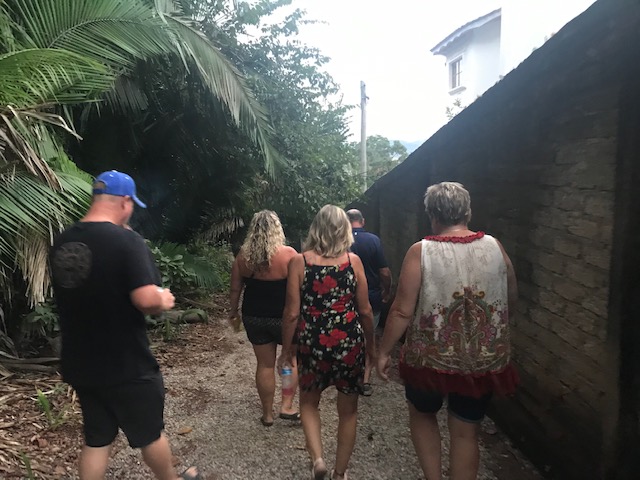 We all got to sit together at a couple big tables and some of us had supper while others had already eaten.   We had a great evening together dancing and enjoying the music.

The band was great!!!  They played lots of CCR and ACDC and that kind of music.  There were a pile of people dancing all the time. 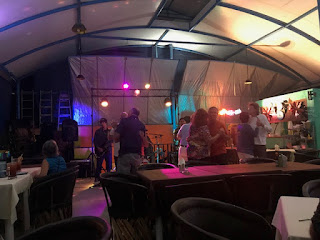 The lead guitarist was only 23 and he could play that thing like nobodies business.  I was blown away with his skill.  And the drummer was the lead singer which is strange for a band.  He had great vocals and could adapt his voice for whatever song he was singing.  The bass guitarist was good too!! 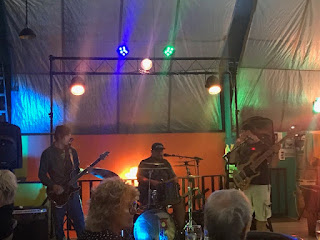 There was this dog in the place that the owner tried to shoosh out of there.  A guy in the corner said no no  he is my dog!!!  Apparently this Mexican dog had come to this guys door a couple weeks ago and wouldn't leave.  Try as he might, he won't leave, the dog is stuck like glue to the guy and he even had to bring him dancing.  He says he is now stuck and will have to take it back to Canada.  It is a really nice dog by the way.  So every time the guy got up to dance the dog was up there too and it almost looked like he was dancing!!! 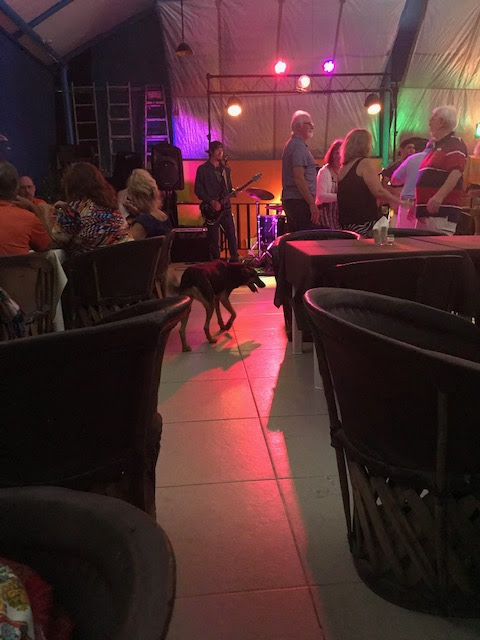 There are 2 guys that own the place and they run the whole floor themselves.  Sometimes you have to wait a minute or two extra, but for the most part, everything is fast and good. 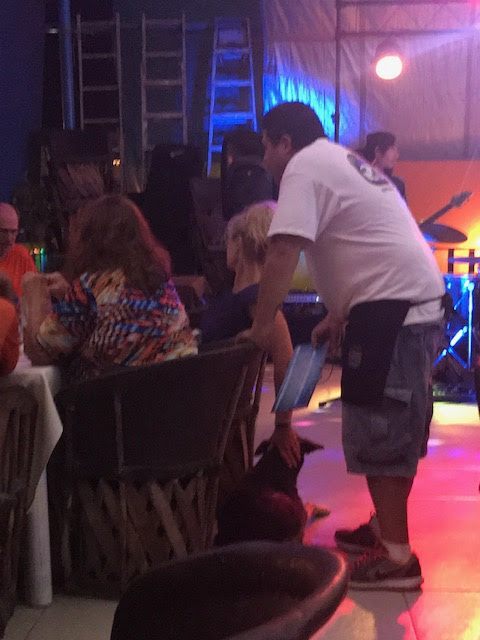 We had a great evening with great people and will be back for some more entertainment sometime.  Believe it or not, we didn't get home until after midnight.  That is the latest we have been up in forever!!!!

The sunset was a little different again tonight and it did rain about an hour after this picture.  They say "into everyones life a little rain must fall"!!  We actually love the rain here.  Hope your day was great as well. 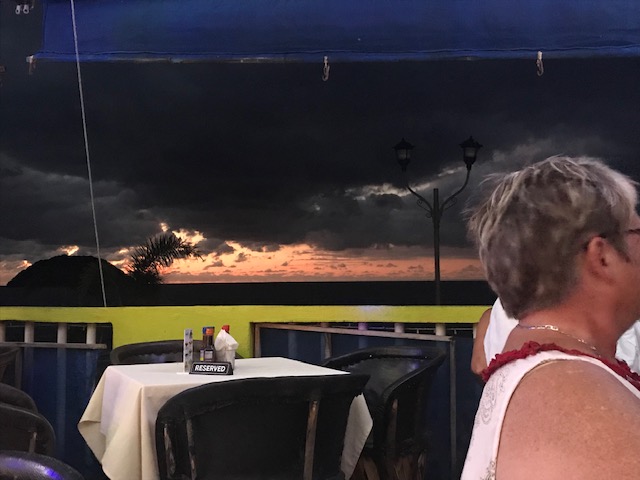