Out on the Town

I took a leisurely stroll into La Penita this morning just because I could.  I had no purpose in mind so I just kicked along with my bare feet in the warm sand watching some fishing boats out on the water and looking at the houses along the way.  I came across this guy who was walking where the waves were washing and he would take a step and then wiggle his foot into the sand and then let the wave wash over it.  When the water receded he would reach down and pick a bug like creature out of the sand that was about the size of a ping pong ball and put it in the bag he had.  There were about 50 of these things in the bag.  I asked him what they were and he told me but I didn't understand.  He motioned that they were for eating!!  Later I googled it and it seems they are sand crabs.  Ok now I know. 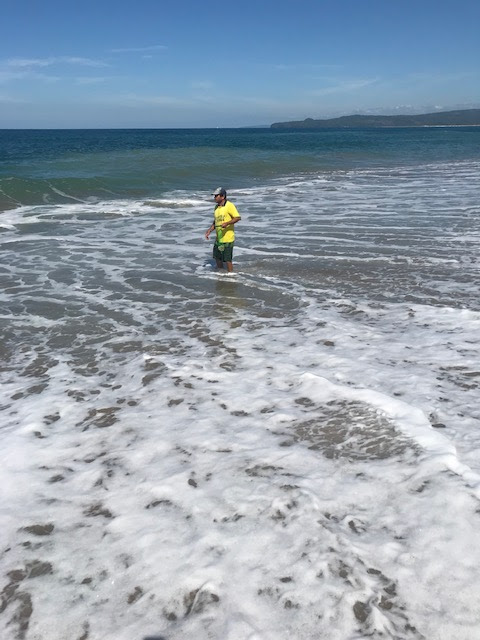 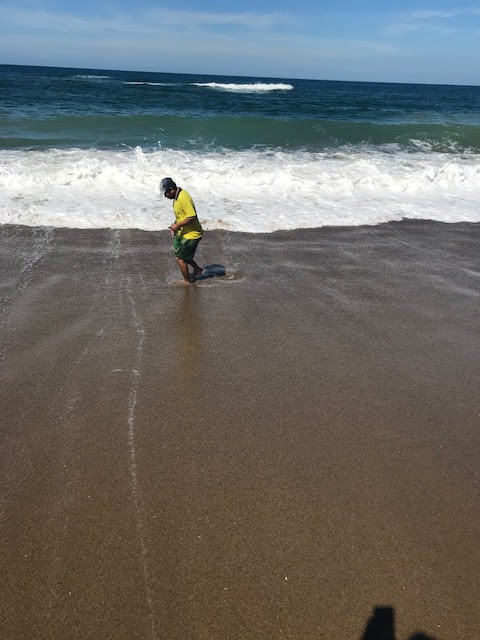 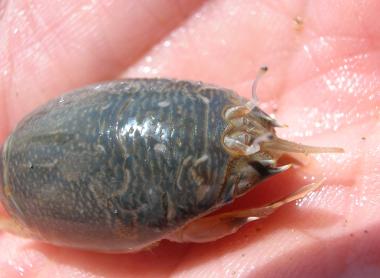 Further down the beach I could see that with the tide being high I wasn't going to get around one building so I had to take a detour or swim.  I'm not much of a swimmer so I went around. 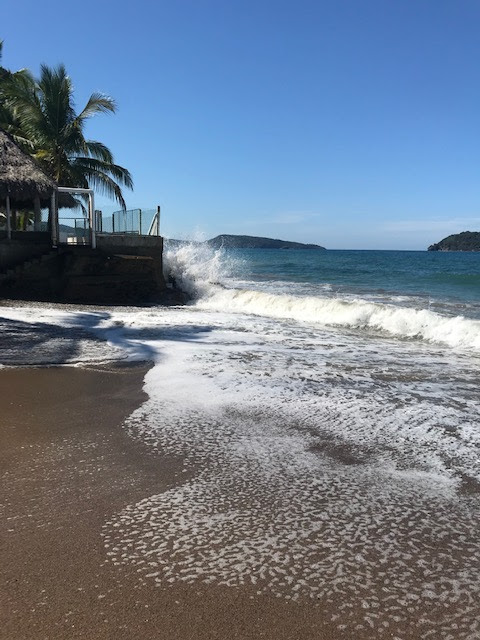 There is a cute little trailer park that has a few RV's in it about half way to town so I thought today I might stop in and have a look.  It is right on the beach and looks like a sleepy little place.  It had a little sitting place out front overlooking the ocean. 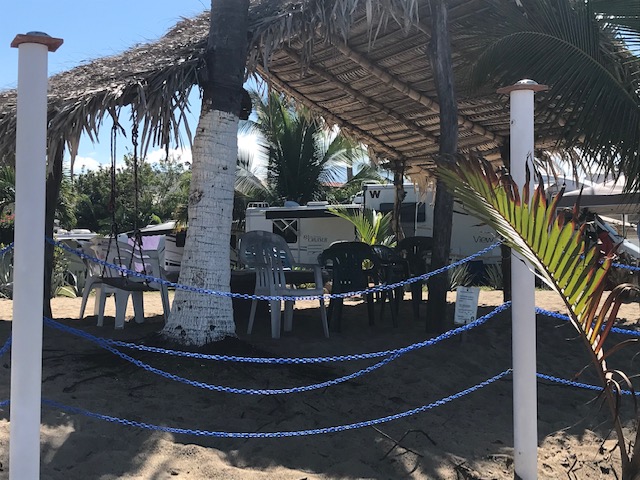 There are about 8 RV's in here with most of them under 30 feet and one bigger one in the back.  I walked around a bit and ran into the caretaker/manager whose name was Sergio.  He said they are full most of the time and I can see why.  Nice place. 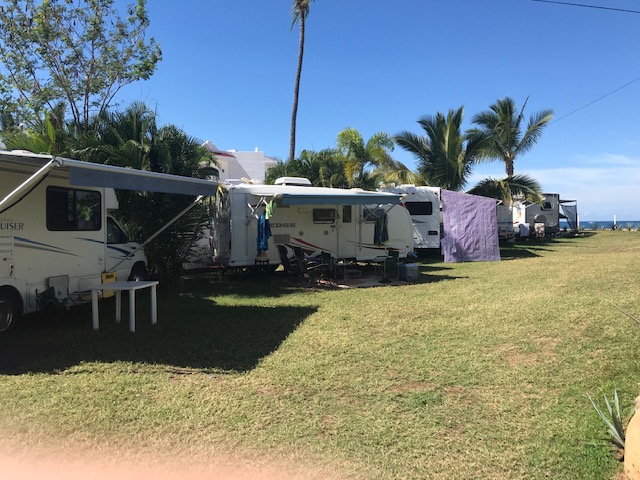 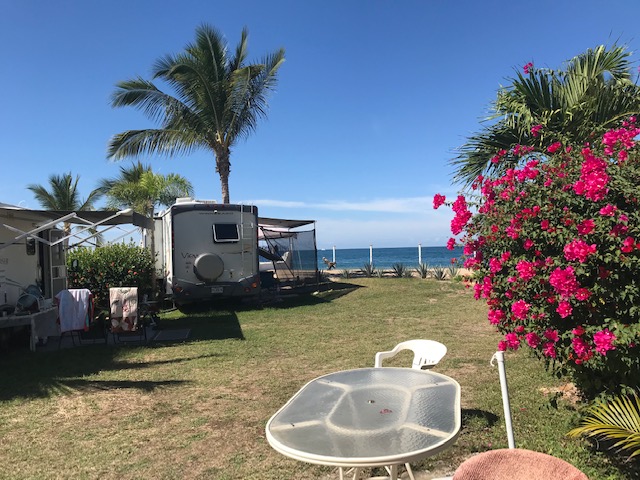 Even a nice little swimming pool!! 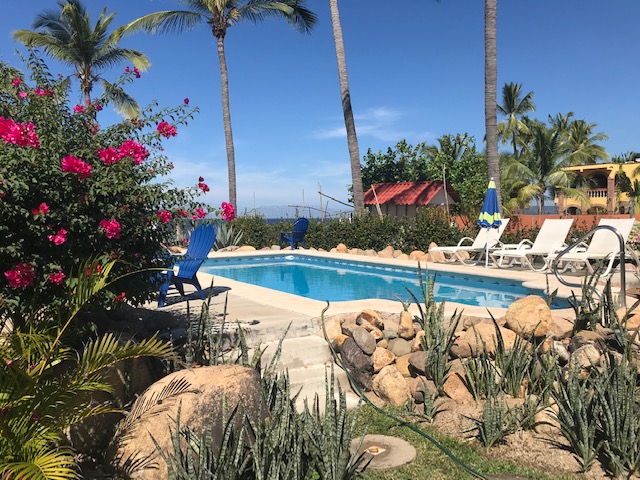 I love the way the fishing boats just sort of hang around on shore.  No rhyme or reason for where they are, they are just there.  And the fishermen are probably home sleeping because they head out really early in the morning to get their catch. 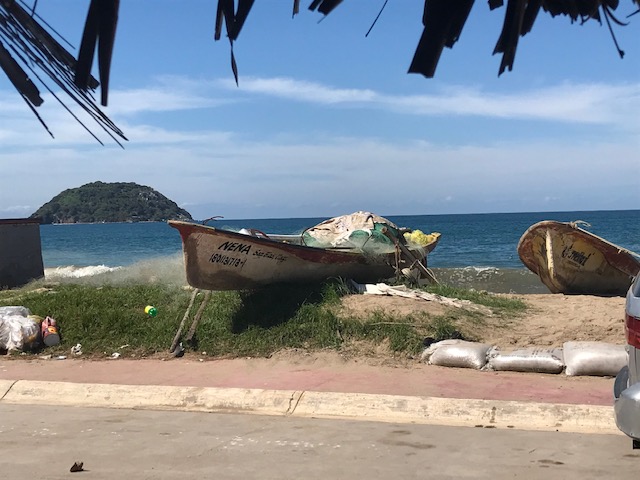 I would love to have one of these rigs to use as an Ice Cream cart for back home at CJ's.  Wouldn't I look good driving around dinging a little bell selling Ice Cream?? 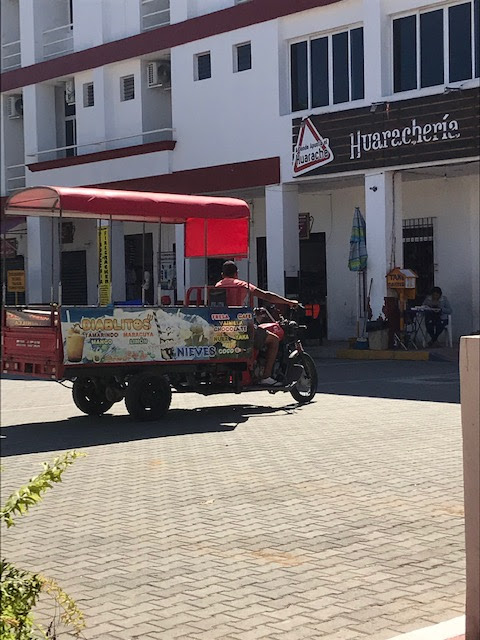 This evening we were invited to join some friends for supper downtown.  This little restaurant is only open in the evenings and is in a residential area where the average person would not find it.  It is called Las Koritas.   It had about 4 tables kinda in the street with typical plastic chairs and tables.  But the food was delicious.  Most of us had the Alfredo shrimp or pollo. 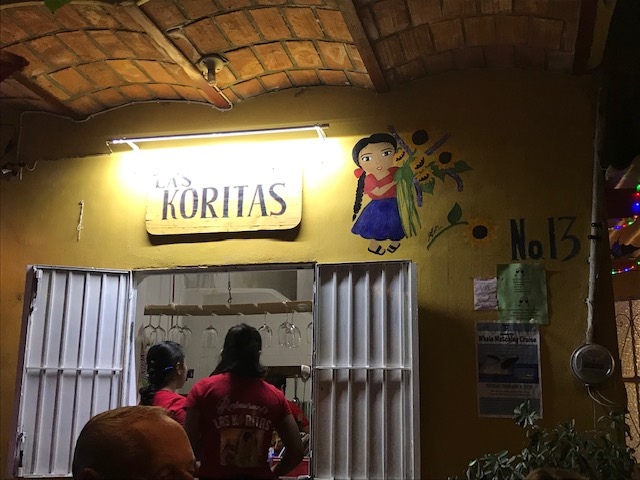 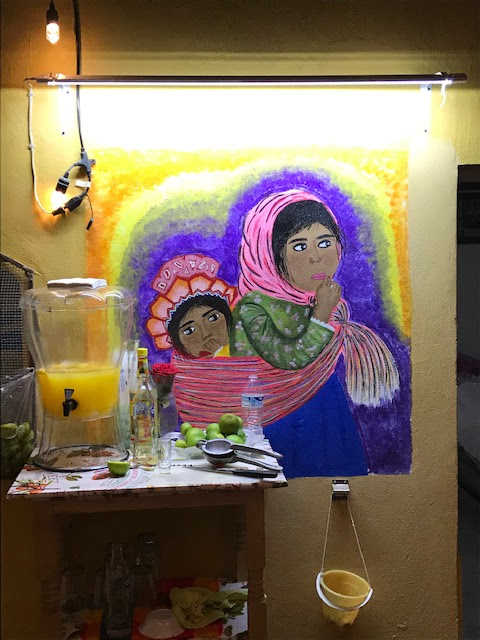 A little story goes with this supper.  Remember Sergio, the caretaker/manager of the little RV park I explored?   Well meet Sergio the owner of Las Koritas!!!  We had no idea we would be finding him at supper tonight.  He did remember me but there was no discount involved. lol. 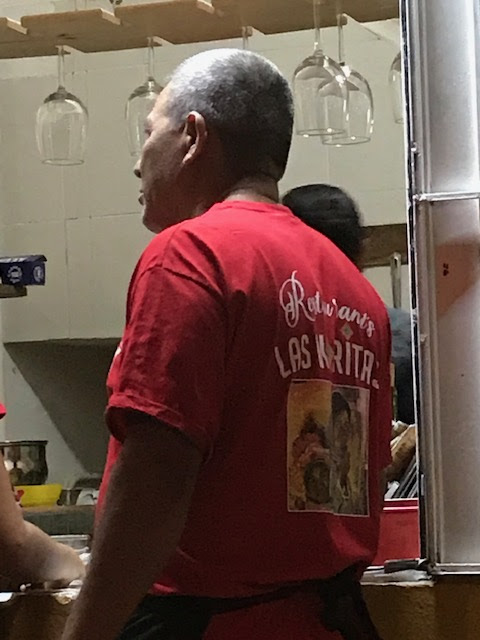 After supper we all headed down the street for some churros.  I am not a big fan of these but they are ok.  I love watching how the street vendors make them.  At home they would be shut down in a heartbeat by either safety or health, but here they just keep serving delicious food. 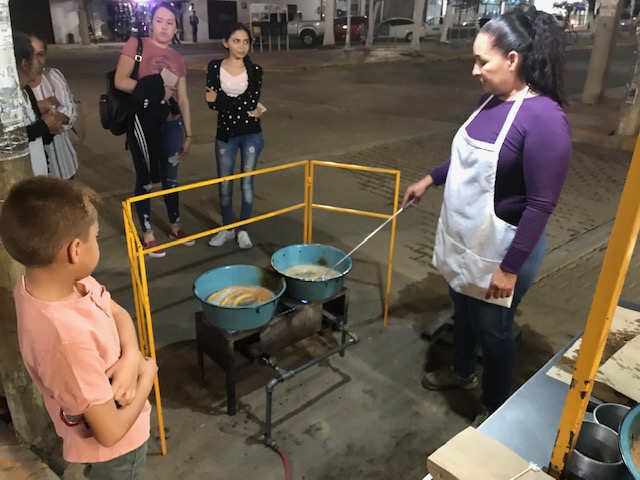 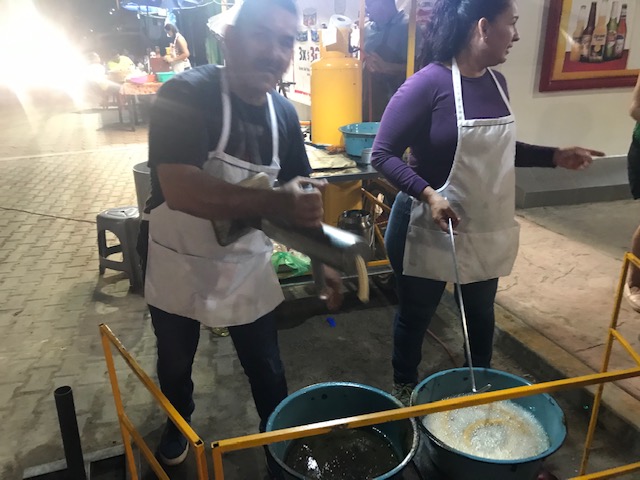 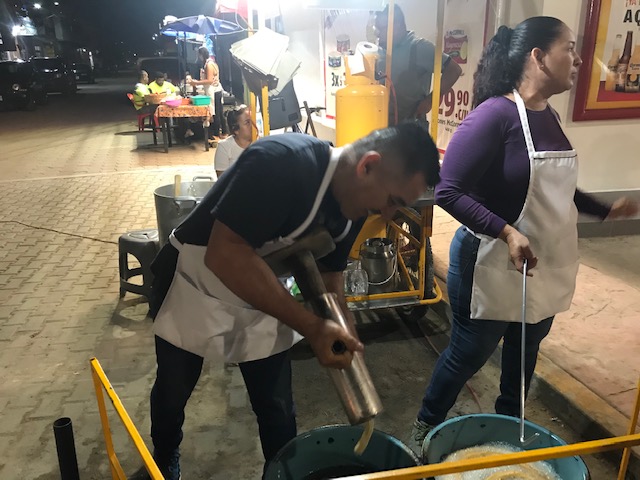 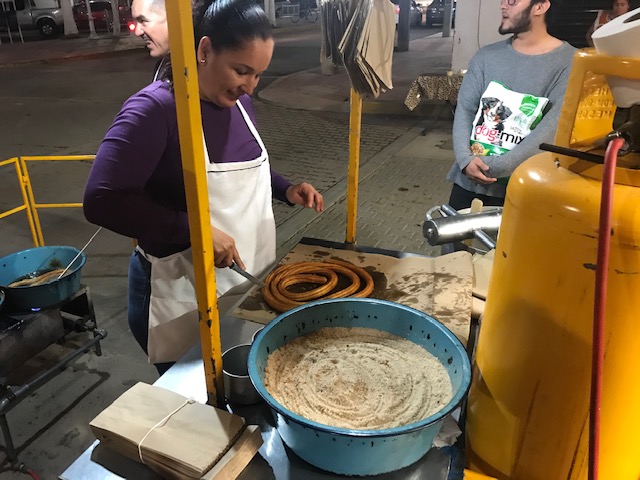 They even do a take out service.  This truck drove by on the main street and shouted out his order and then drove around the block and up the side street and bingo!!  It was ready for window delivery!!! Gotta love it!!! 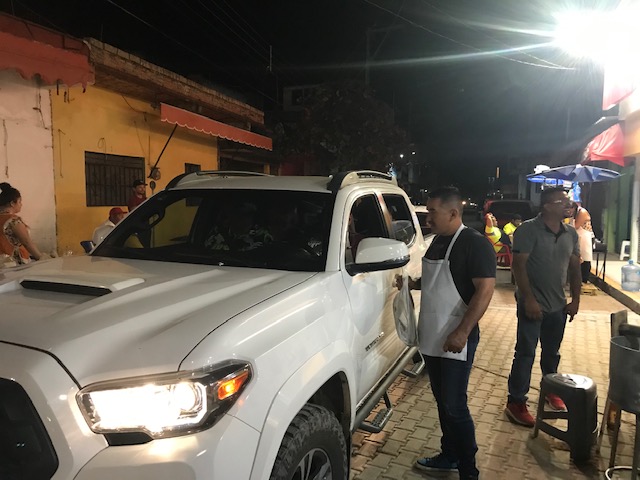 I absolutely love the happy go luck attitude of most of the people down here.  They are just happy doing what they do and they sure show it.  They make us feel good inside.  Hope you had a good day too. 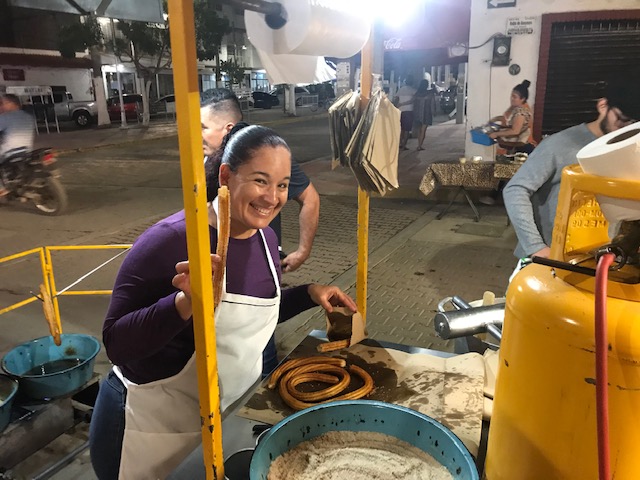 Posted by Lorne Green (A Place Called Away) at 21:33:00
Email ThisBlogThis!Share to TwitterShare to FacebookShare to Pinterest