Today we were going to do some touring again.  Sue had talked to Pat about a trip to Sayulita today and we all thought it was a good idea.  Sayulita is a touristy town about half way between La Penita and PV.  It has lots of snowy white skinned gringo's who just got off a plane with a fistful of money and are trying to buy themselves some Mexico!!!  We know it is busy and touristy, but we have to see it.  Part of our adventure is seeing things for ourselves.  Don't get me wrong, Sayulita is beautiful and has a beautiful beach and lots of things and shops to entertain you and take your money.  For instance, I bought a boogie board when we first arrived down in La Penita for 350 pesos ($25 CND) which was probably a little pricy for what I got.  I looked at one today, almost the same and it was 2200 peso's ($150 CND)!!!  To rent one in Sayulita is 100 peso's!!!   When we got there we had to drive for a while to find a parking spot so we could walk around.  The streets are narrow and mostly one way and full of holes but what the heck!!!  Its Mexico!!! 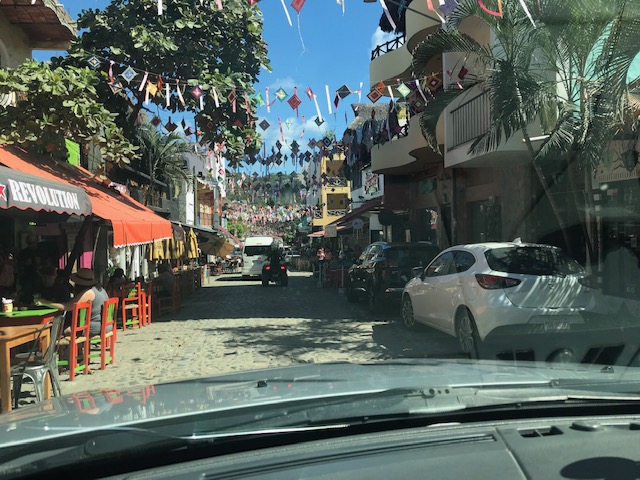 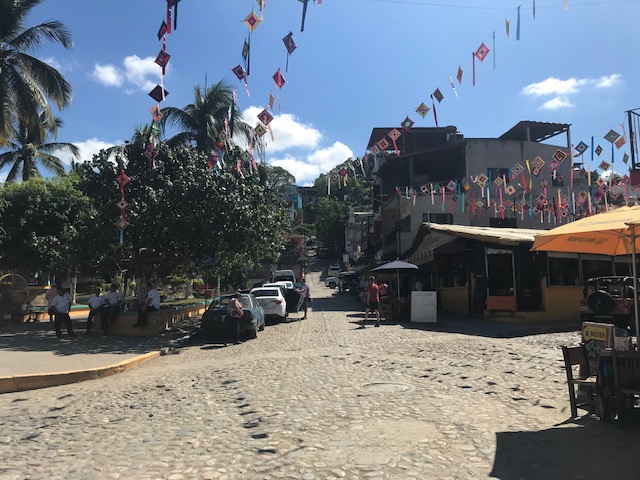 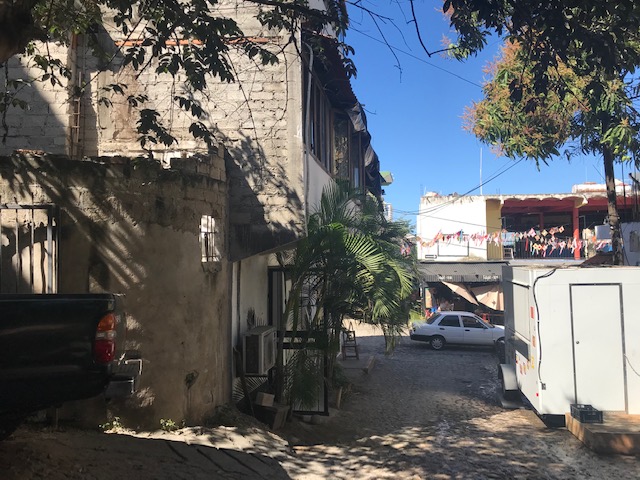 And some of the vehicles would have trouble passing a safety at home I'm sure. 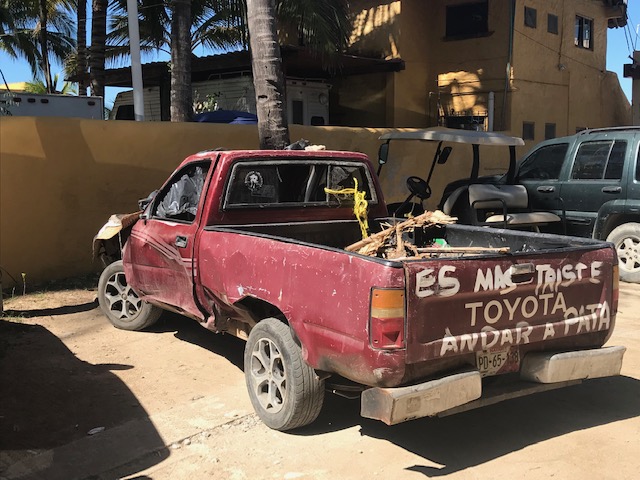 The ocean here was crashing pretty good today and we saw lots of surfers catching a wave.  Apparently this is a good surfing area!! 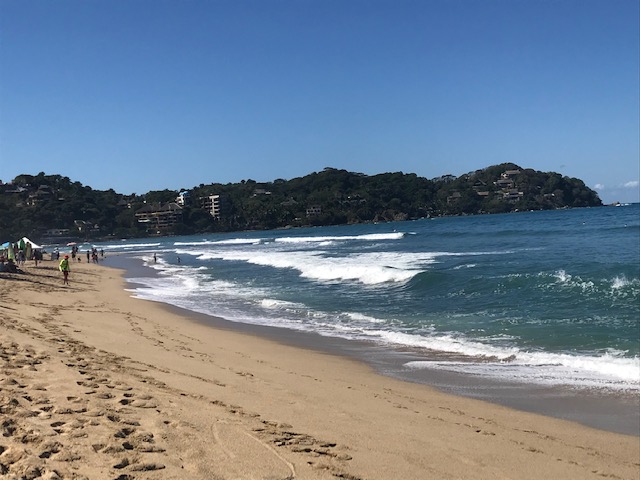 We knew we were in the heart of the town because we came across the town square. 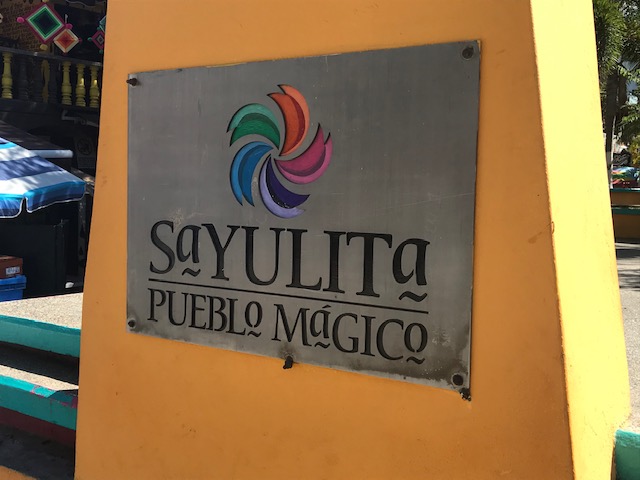 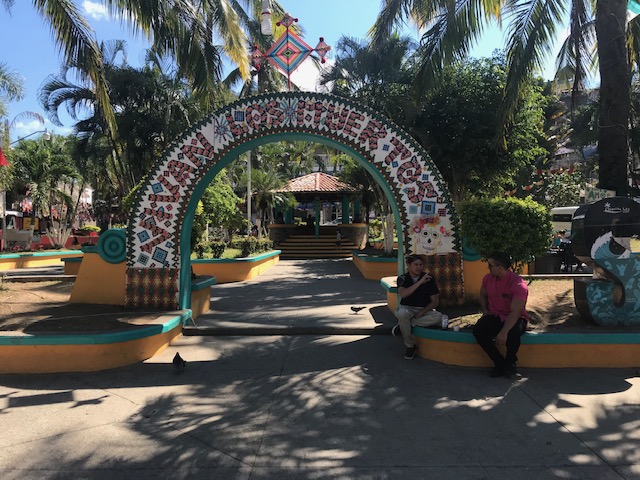 The girls did some shopping and we all did some walking and soon we were hungry.  Most of the restaurants are tourist places, so I asked a girl at a corner bar where was a good place to eat??  She said right around the corner and up the street a couple buildings.  We looked around the corner and could see smoke so we headed that way. 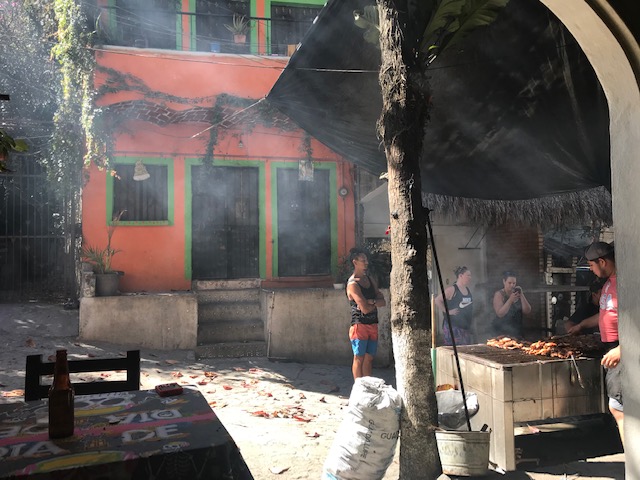 There was a building with a big grill outside with chicken on the grill and the most heavenly smell. 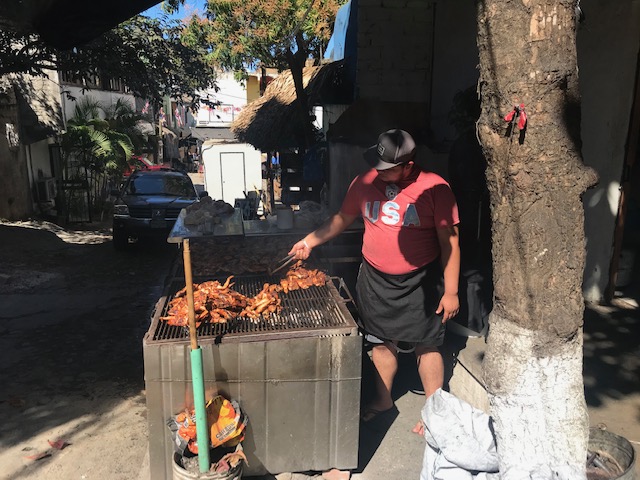 We looked for the restaurant and all we could see was a kind of a kitchen work area with a small table and 4 chairs.  There was another table outside but that seemed to be for the girl to sit and count the money.  But they took us in and sat us down. 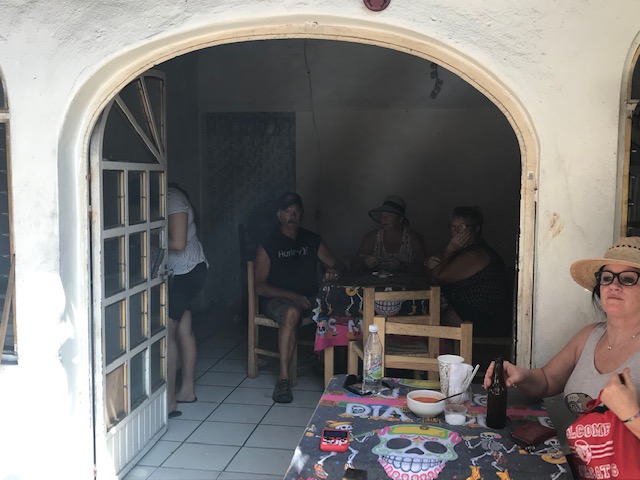 It was a bit hot in there so the girl went and got a fan from the back and brought it out and propped it up on a chair.  It was old and had no grill on the front and metal blades that could make mince meat out of your fingers.  But it moved air and was wonderful!! 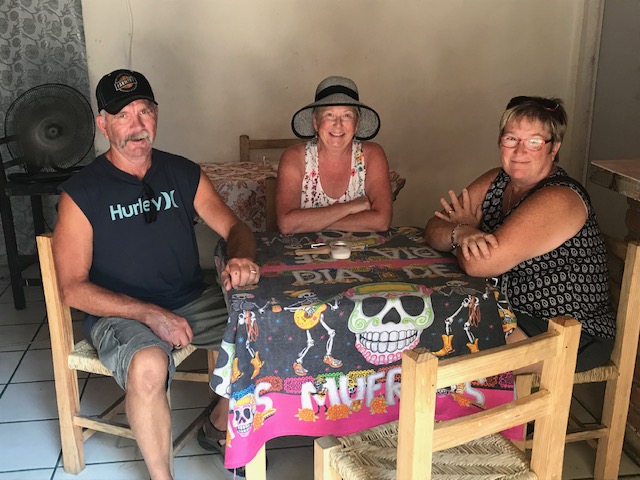 The lunch was absolutely awesome in fact it was so good I didn't take a picture.  Half a chicken, two plates of rice and coleslaw, a water and a pop, and another half chicken with enough rice and coleslaw for two to take home for 210 peso's.  That is like $15 bucks CND.  I don't remember the last time I have tasted chicken that good!!!  We lucked out with this restaurant find!!  It didn't even have a name!!!

We left there and walked down the street and I saw these guys working on a big building.  Now you know that I am involved in some safety stuff and my safety mentor Elaine loves to see the PPE so here are some pictures for you Elaine!!  Not bad eh?  Susan commented that she wondered why there were 3 watching and only 2 working?   I told her... Government job I suspect!!   And one guy will be the safety rep!!!  Probably the guy without the hard hat. 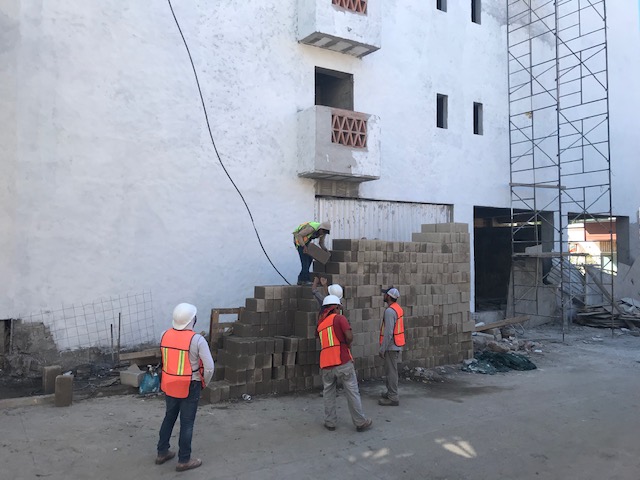 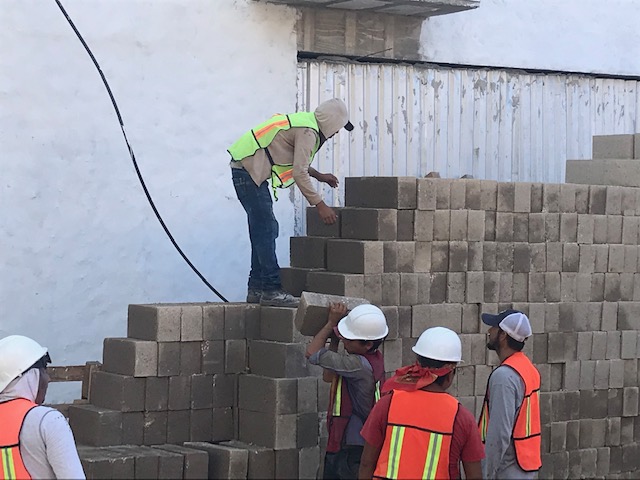 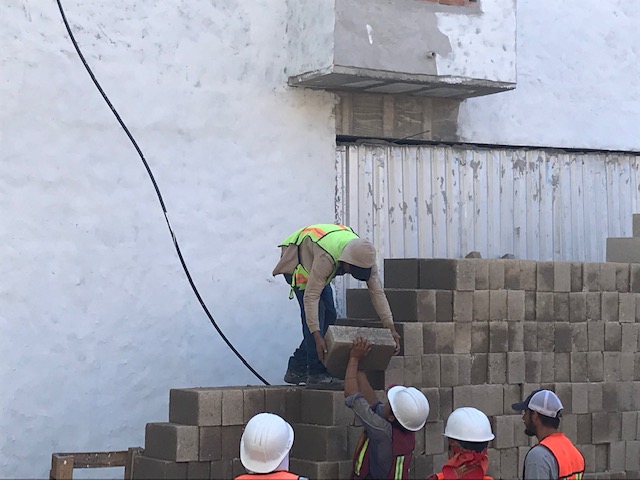 Can you imagine someone in Canada asking your to manually move cement blocks and pile them in a wheelbarrow? 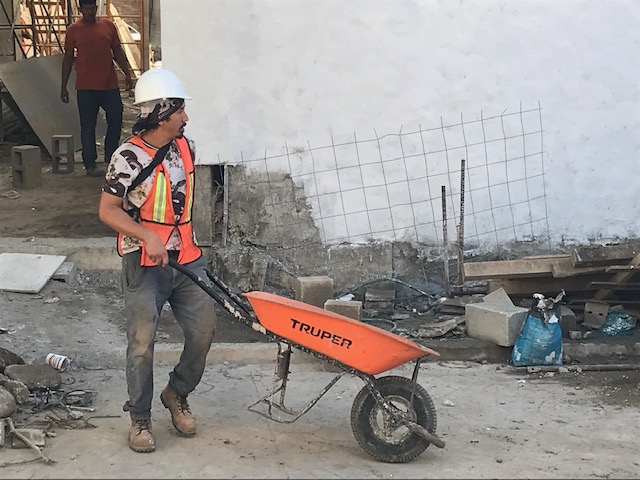 I didn't have the courage to go see how the bricks got way up 5 floors to the guy that was putting them in place!!  And by the way he was directly above the pile on the ground that they were working on.  If one fell off it would land right back in the pile!!  Maybe they planned it that way. 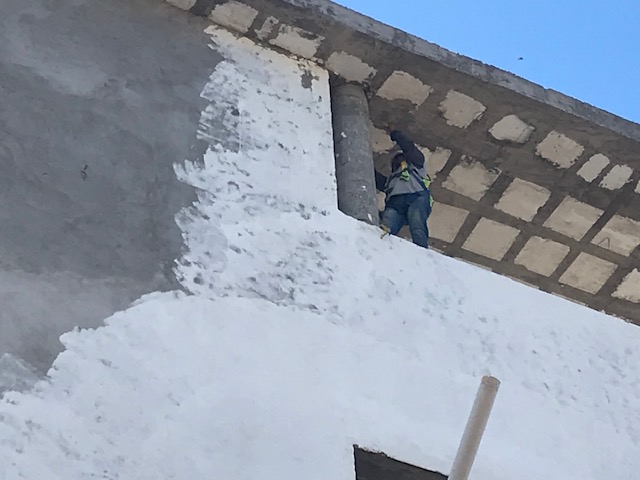 On the way back to the Jeep the girls had to stop and buy some fruit.  I told them it was a little expensive but they brushed me off.  I believe I heard Pat say later that they got ripped off for the fruit!!  It was 100 peso's for a little container of blueberries.  Probably 20 pesos in the vegetable store in La Penita!!! lol   Oh well they are good blueberries. 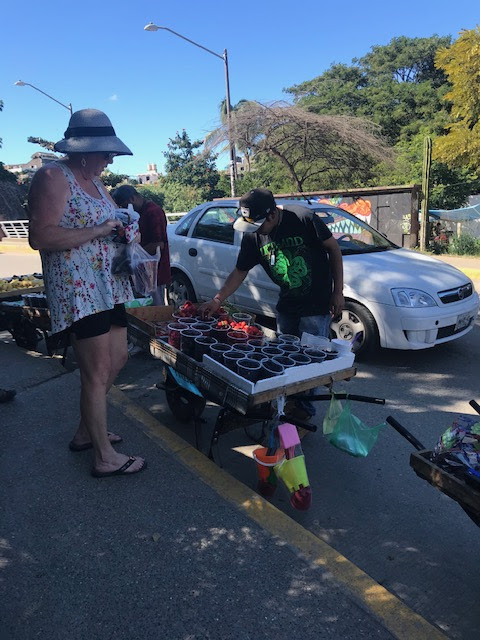 From Sayulita we drove back to San Fransico/San Pancho.  This is another resort type town but not quite as busy.  The town was made popular by the President of Mexico in the 1970's when he chose it as his vacation retreat town and there was a lot of Federal money pumped into it to make it appealing as a vacation resort.  We found a parking spot and headed down the narrow sidewalk to the beach and downtown. 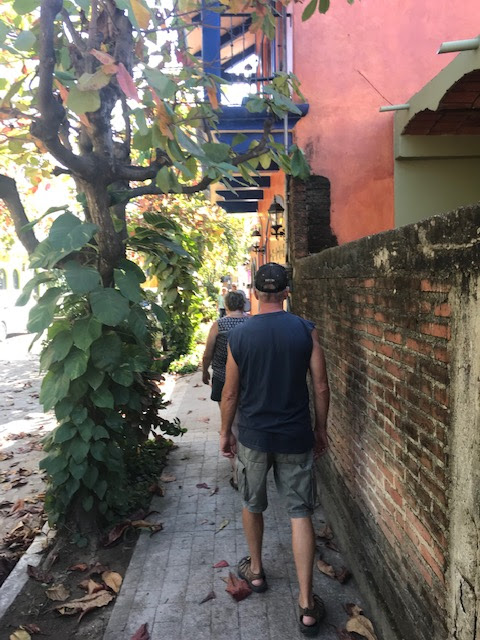 The beach is lovely just like Sayulita and the waves are big here as well which attracts the surfers.  Lots of hippie types hanging around here and I'm sure it has quite a night life after dark. 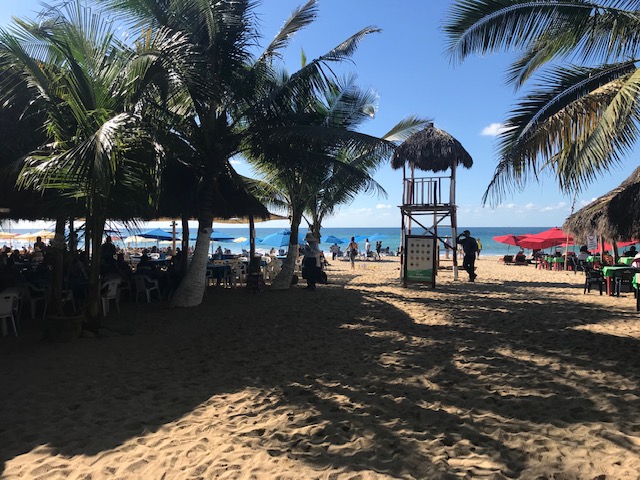 Lots of up class little eateries and colourful people and vehicles. 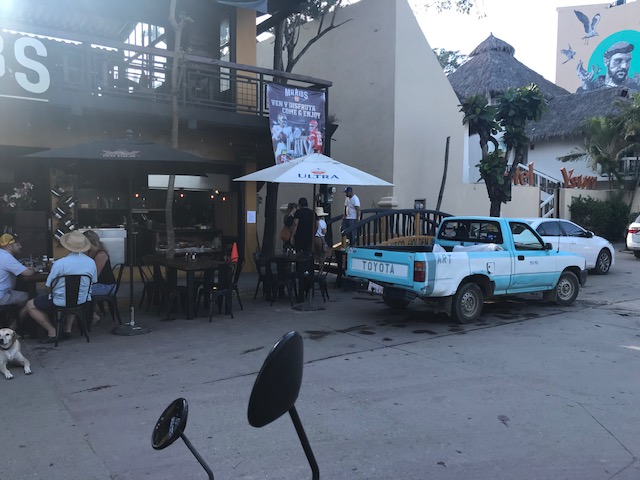 It was a good day of touring and we headed home glad that we are in La Penita where true Mexico still exists and no one is trying to sell you the Mexican experience.   Tonight is Taco Tuesday at the park and Kenia and her abuela, Tina, and her aunt Cecie are serving up Taco's and crepes to a good crowd of people. 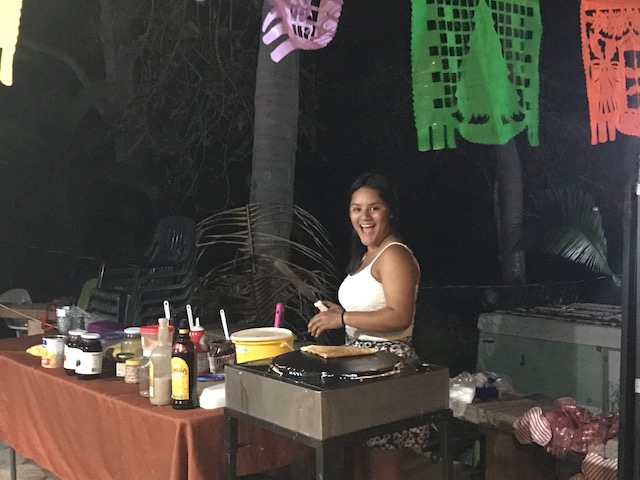 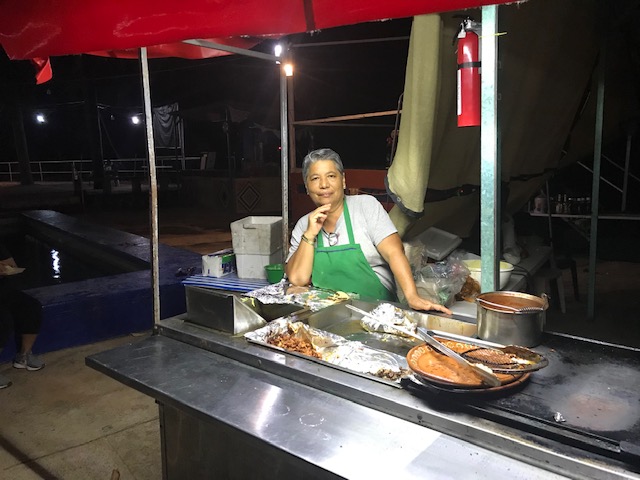 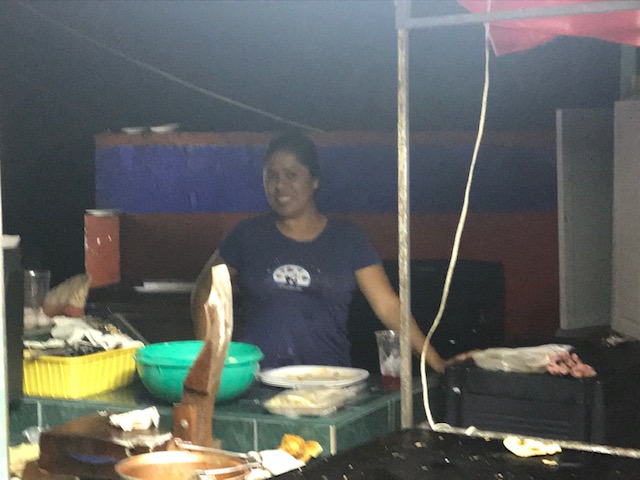 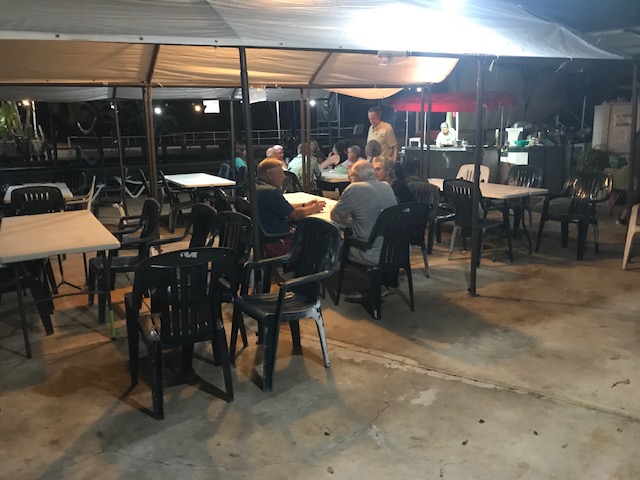 We had a great day exploring some new places.  Hope your day was great too. 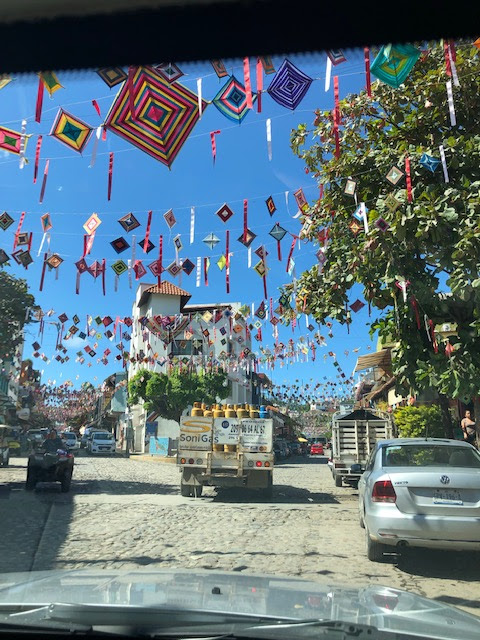 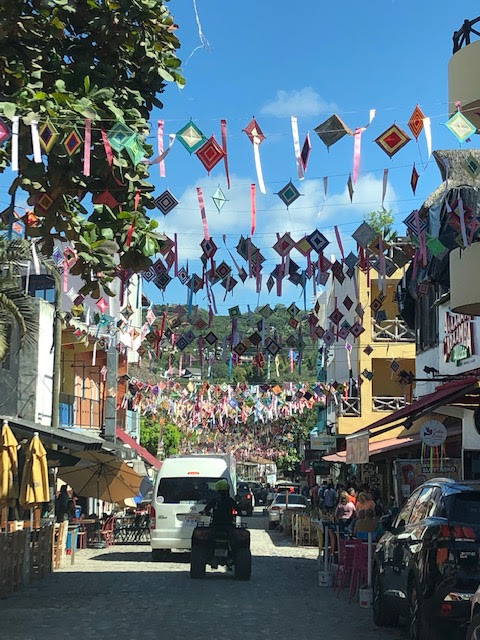