A Friend drops by!

WHERE ARE WE? Hinton, Texas
NEXT DESTINATION? North on Saturday

We had a nice leisurely morning.  Some coffee and check on some bloggers.  Then a little roam around facebook, nope don't need that.  Sue has been bugging me to help her do highlights in her hair.  I guess it is no secret, but I am her on the road hairdresser when it comes to highlights.  It doesn't take a lot of talent on my part but it does require a thick skin on my part because every time I poke her with the little pick thingy she lets me have it verbally!!!!  I just snicker a wee bit and carry on!! 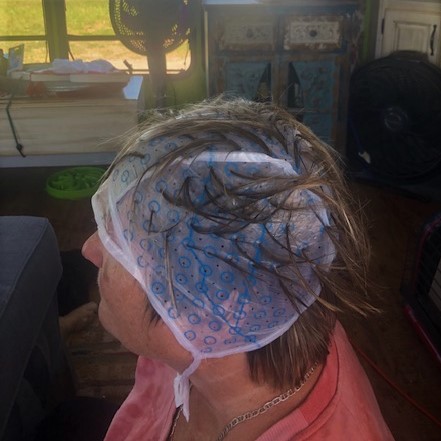 I guess a before and after might be a good thing to show you.  From beauty to beautiful in about and hour!! 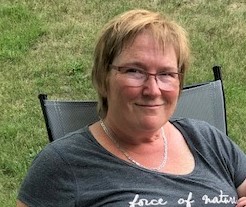 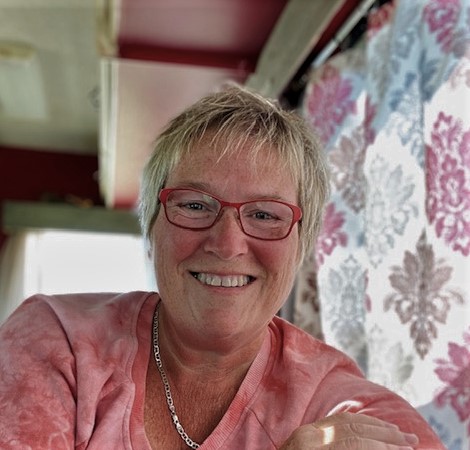 Meanwhile, Charlie didn't give a care what was going on in the Ponderosa because he was way too busy digging up his own gopher.   I don't think he ever got him but it wasn't for a lack of trying.  The poor guy will have sore paws for a couple days now but he enjoys the chase so much that we allow him to dig for a little while. 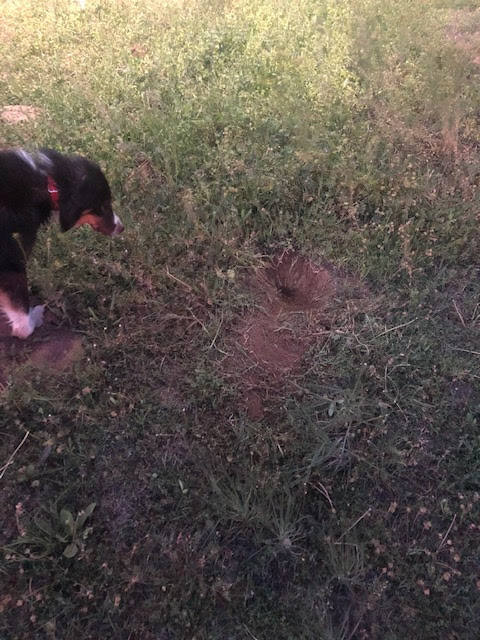 We had got an email from a blogging friend that he may show up here this afternoon if we were going to be home.  Sure we are, and it wasn't long before Doug Laning and his White Lion pulled into the parking lot.   Doug does a blog known as Miss Adventure Travels and I read it regularly.  Doug travels by himself for about 3 months each winter and then heads back to Illinois for the summer to be with his wife Dolly and their family.  He is on the way home but decided with the rough weather in Illinois, that he might just stop here for a day or so to let it warm up a bit in the north. 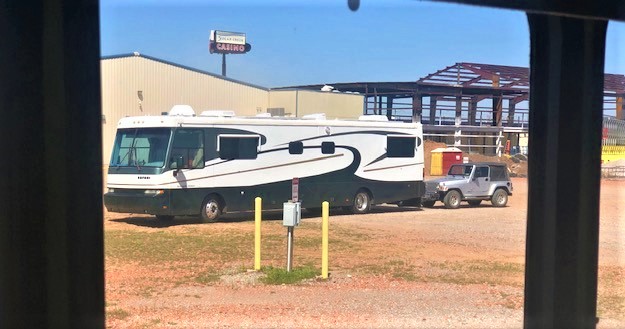 Once he got parked we sat down and had a good old chat about a lot of things RV and Blogger related.  His new rig is a Safari Serengeti and one of the trademarks of a Safari is the large mural of some sort of African wild animal on the back.  This one is a white tiger but Doug says there is a White Lion on the inside, so he has named it the White Lion. 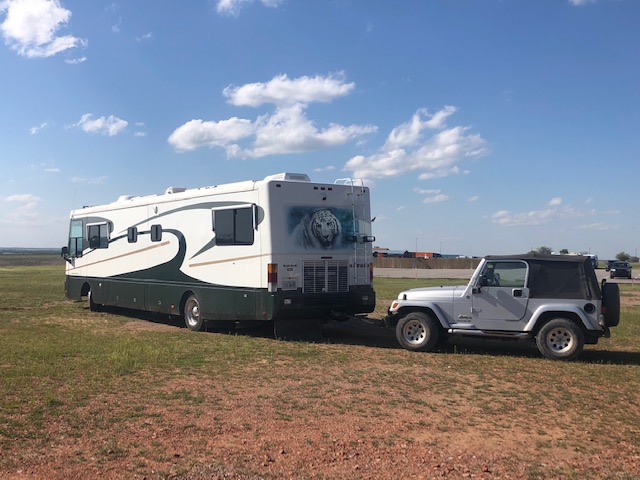 We talked of some of the other Bloggers we have met along the way and some who we haven't met yet, like Deb and Riley who are good friends of Dougs.  Deb write a blog named On a long and lonesome highway and Sue and I feel like we are friends with them already but we have never met in person just because our paths don't want to cross.  One day!!  Doug is a boondocker through and through and it is nice to talk to someone who knows that sort of RVing.  We haven't done a lot of it this winter, but still enjoy the lifestyle when we can, like right now!!  I made sure that we were doing the proper social distancing by getting out the measuring tape to prove it.  6 feet exactly!!!

Sue came out and joined us and we all enjoyed some time on the non windy side of the Ponderosa.  The winds were blowing about 25 mph almost all day!!! 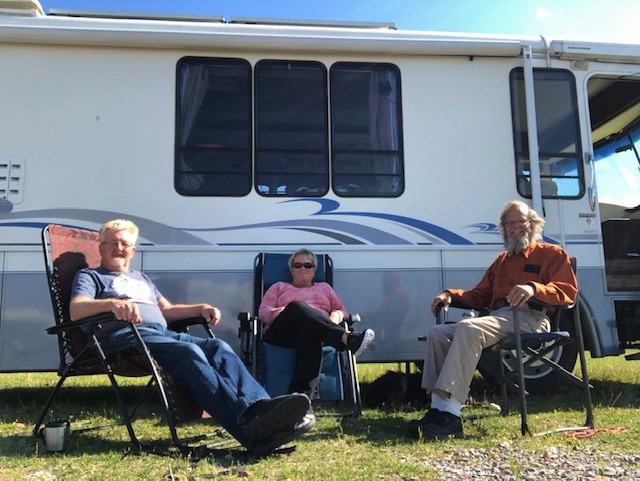 About 6 oclock we parted company and Doug went to set up camp and we went home for a yummy supper of the last of our Mexican shrimp.  Sue did an awesome job of it and it was finger lickin good!!  Sorry Patsy, I just have to post a picture of it.. 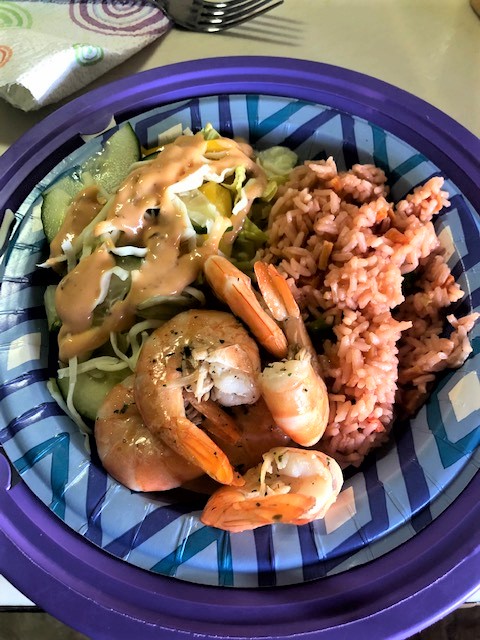 The view out our window tonight includes our friend Doug who is settled in for the night next to us.  We will get some more visiting time in tomorrow I'm sure. Good night all!! 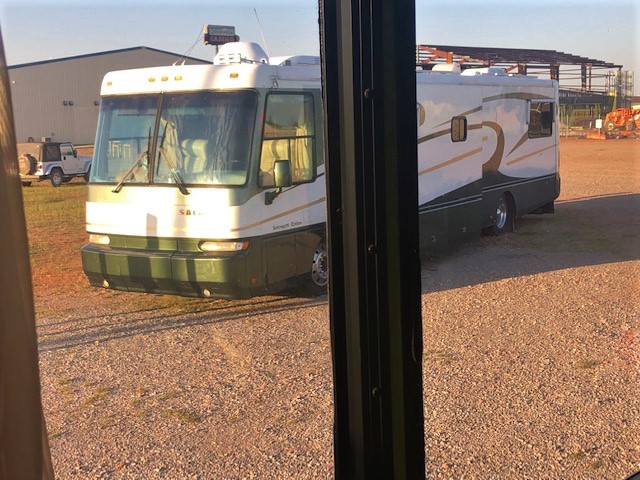 Posted by Lorne Green (A Place Called Away) at 21:15:00
Email ThisBlogThis!Share to TwitterShare to FacebookShare to Pinterest