A Night With the Kids at the Festival

WHERE ARE WE? La Penita, Mexico
This morning we woke up to a familiar sounding beep beep beep.  2 years ago, in La Penita RV park the bread truck used to roll in and it had a unique sounding horn.   I recognized it immediately and saw them driving by our gate.  I waved them to stop and backed them into our parking lot and the people came from all over the park.  Fred had talked to them about coming a couple weeks ago and they never came, so today they decided to drive by, and I think they were glad they did.  They sold lots of stuff and promised to be back next Saturday morning. 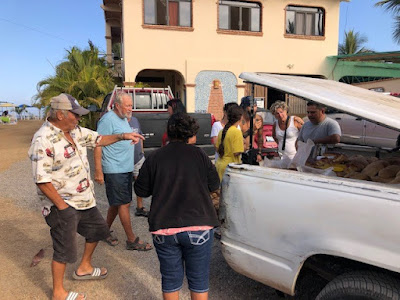 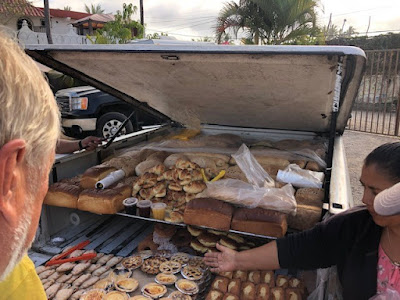 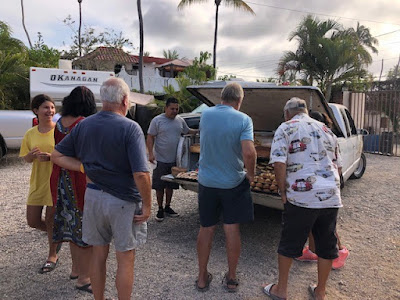 I'm not really sure why I am including this picture of Jeff, but I am!!!  He would like the world to know that he is young, handsome, athletic, rich, and single!!!  He says when he grows up, he would like to be a dentist!  Too late, he already was one!!  He is the manager of Numero Uno Boutique RV Park and Suites where we hang out. 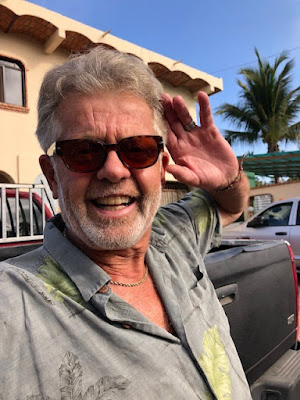 We got all filled up with all manner of pastries and tasty treats to the point where we spent the rest of the day lazing and getting prepared for a big night on the town tonight.  Remember the festival is in town and tonight we promised the kids we would spend some time there with them and have some fun.  So about 7:30 we headed downtown to have some fun. First things first, we got Oscar and Journey on some rides.  They were all smiles and enjoyed themselves for the most part.  Oscar's stomach couldn't take the swings and he had to have a break. 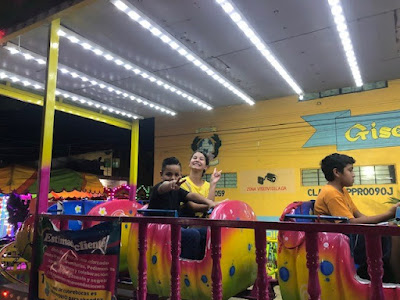 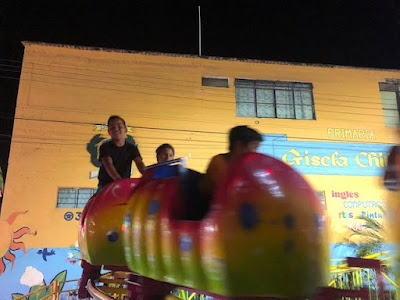 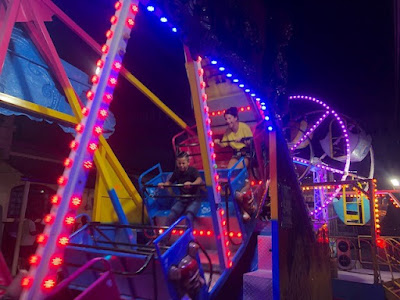 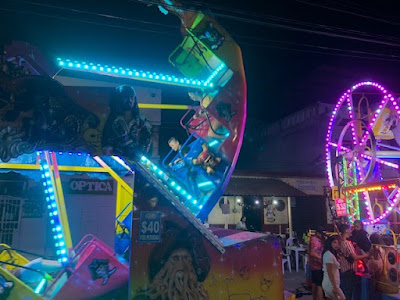 Harold had won at the throw the rock and win a beer contest a couple years ago, so he tried again and sure enough he won another beer!!! 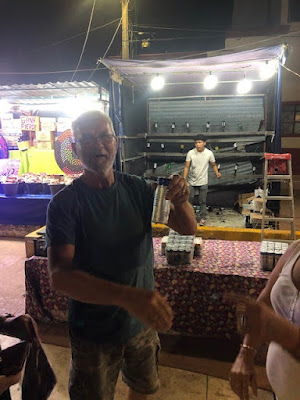 Then Journey and Kenia got to conspiring to win something as well.  Journey thought maybe Kenia would be good at the gun game.  I think she had to talk her into it. 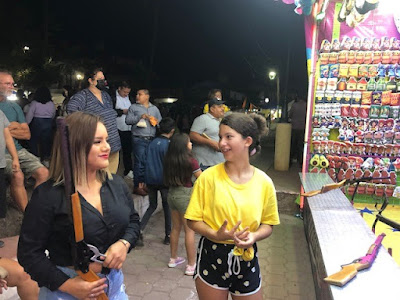 Once the gun was in hand, they slowly went over the rules.  I got this; Kenia says!! 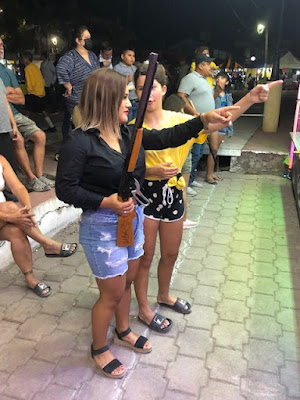 Look out ducks here I come.  How do you load this thing anyway?? 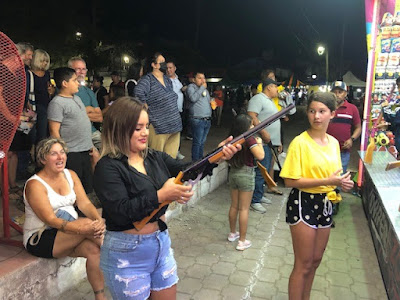 Journey says to herself "self, things are not looking good so I'm gonna grab a gun and help out". 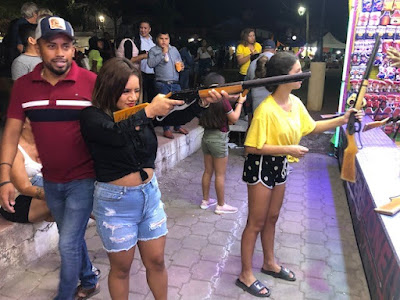 Well, all in all there were not many prizes to be had in this game and no one got hurt or shot, but it was fun!!  I think the poor Carney was a bit nervous with the girls waving the guns around. 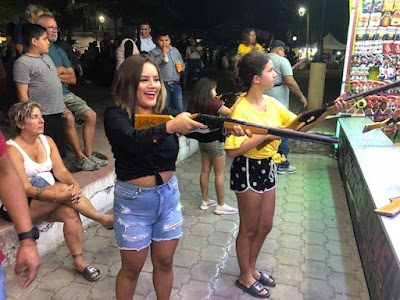 Oscar gave it a couple tries as well to no avail. 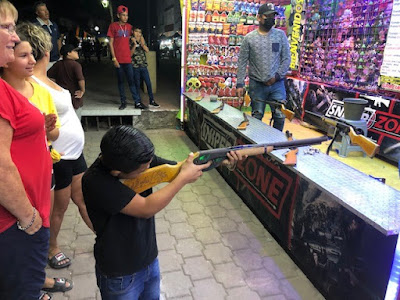 The big girls were full of giggles tonight and were doing the typical teenager stuff.  Kenia's best friend Alejandra had some time off from her studies to party tonight.  She is studying to be a doctor. 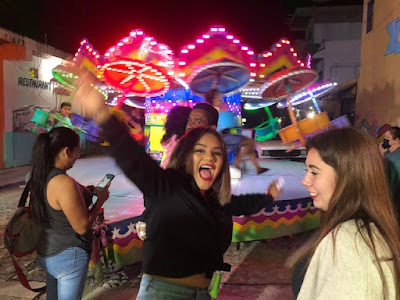 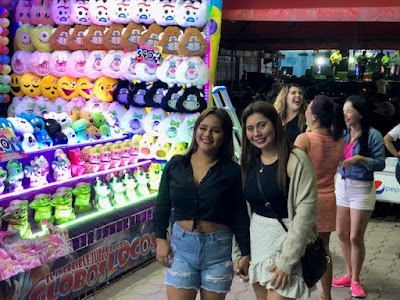 Kenia and Josie took us out for some supper about 10 pm.  We rode in the back of Josies truck.  We are almost too old for that!!  We went to a quaint little restaurant in someone's living room and had pozole and tacos and tostadas. I didn't get any pictures!  It is a little different to eat that late.  Thanks Kenia and Josie for the supper. 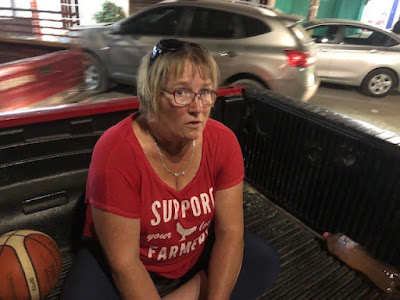 It is very different for us to arrive home at 11 pm.  Archie wanted to play but it was bedtime, so Sue told him to quiet down.  Hope your day was great!! 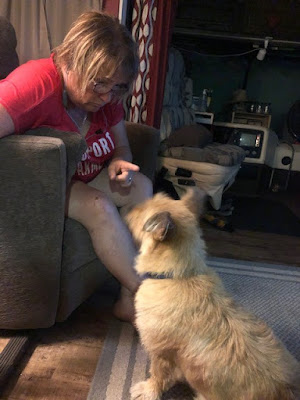 Posted by Lorne Green (A Place Called Away) at 14:29:00
Email ThisBlogThis!Share to TwitterShare to FacebookShare to Pinterest