Sometimes you just spend a lot of time sitting in a day and today was one of these days.  We sat around home sipping coffee and reading until about 11 o'clock.  We decided to go look at some RV's today near us.  So we jumped in the Jeep and sat there while it took us to an RV place.  On the way out we looked over at the repair bays here at Cummins, and the whole place was full of RV's.  I think they know how to work on them here. 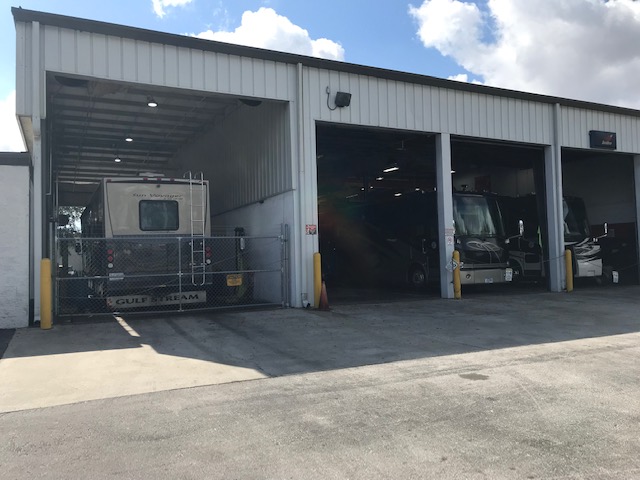 First place we went had no used RV's so we went inside to look around.  This place is a subsidiary of Camping World, called Ganders.  They are like a sporting goods store and an RV store combined.  Sue always likes to look for the ultimate rocking lawn chair, and she spotted a cuddle lawn chair while she was looking so she sat in it. 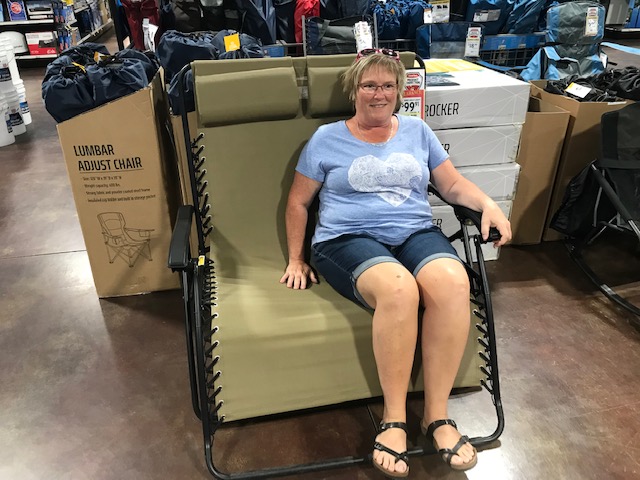 She even invited me to come join her sitting in it.  She wasn't sure that she liked it at first. 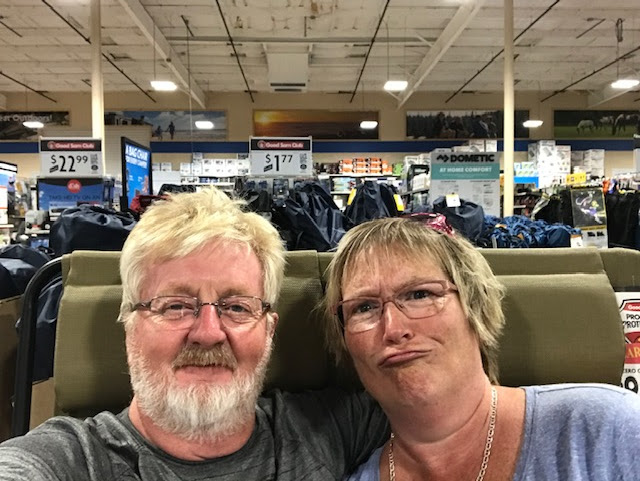 But the longer we sat in it, the more she liked it.  It would be a great way to relax under the awning. 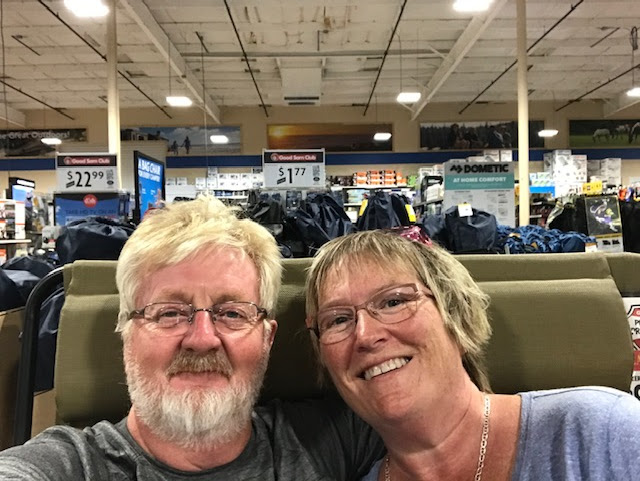 While we were doing all of this fooling around we had a salesman by the name of Shed, looking for the ultimate rocking chair for Sue to sit in.  He was a little bit over indulgent and Sue headed down to the clothing section to try to get rid of him.   But look who showed up toting a rocking chair for her to sit in right there in the middle of the isle.  Yup it was Shed the salesman. 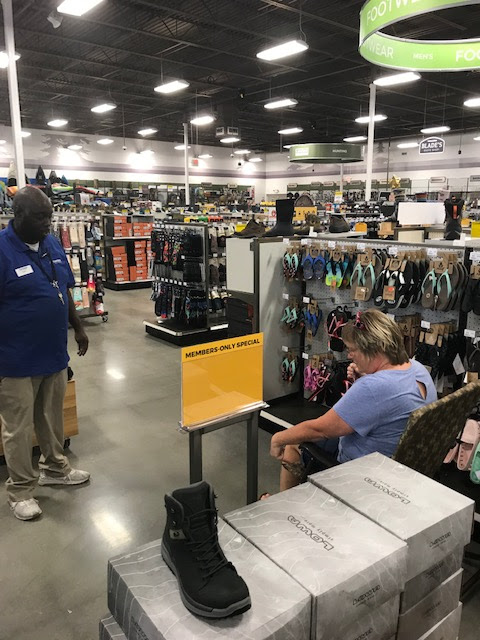 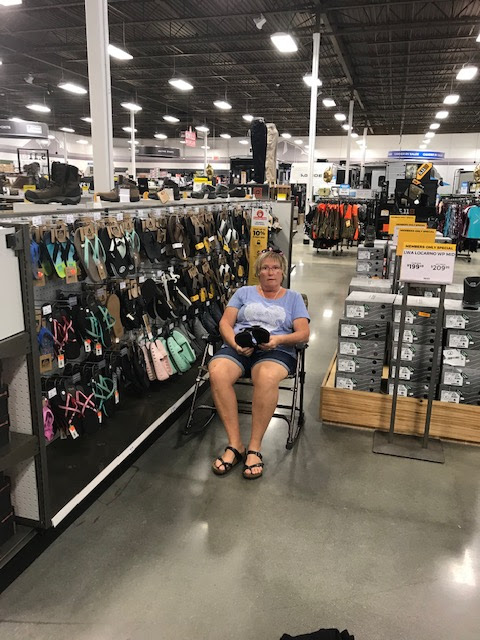 We had to try to get out of there before he sold us the whole store so we asked him where we could find some used RV's to look at.  Well he said just down I-75 and turn left on CR484 and then turn right at 441.  So we decided to go.  Must be just down the road cause we can see I-75 from where we were sitting.  Well we drove for 10 minutes down I-75 before turning on CR484.  We drove for another 20 minutes on 484 before coming to 441.  We then drove on 441 for another 5 minutes and we were there.  Not exactly just down the street like he made it sound.  Our behinds were sore from sitting when we got there.

Our intention was to look at some used Class C RV's at Camping World.  We asked the receptionist where to find used Class C's and she said they were just behind the store, out that door.  We went out there and guess what?  Nothing!!  Good thing a nice young saleswoman was there and she said, oh no they are way over on the other side of the property, but offered to give us a ride in the golf cart.  Sue sat in front and me in the back and off we went.  She said she only had 1 used Class C, but when we got over there, we saw about 5.  The sales girl said the others were too expensive for us and showed us one which was actually quite nice. 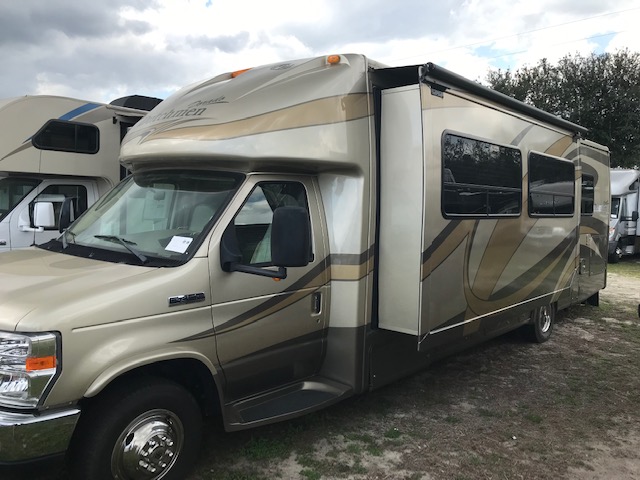 She got all excited and wanted to take us in an write us up until Sue said, Oh No we will not be buying anything today.  To sell us an RV will take some doing.  We will be sure its the right one.  Well she dropped us like a hot potato and said she would send us an e-mail if anything came up.  Probably a good thing that Sue gave her a bogus e-mail and phone number, so I doubt we will be getting any hate mail.

We did stop at one more used RV place down the road and look what we found!!  A Rexhall Roseair, but a gas job.  It is squattier than ours but the color and stripes are exactly the same as our.  I didn't know they made one with a V-10 Titan. 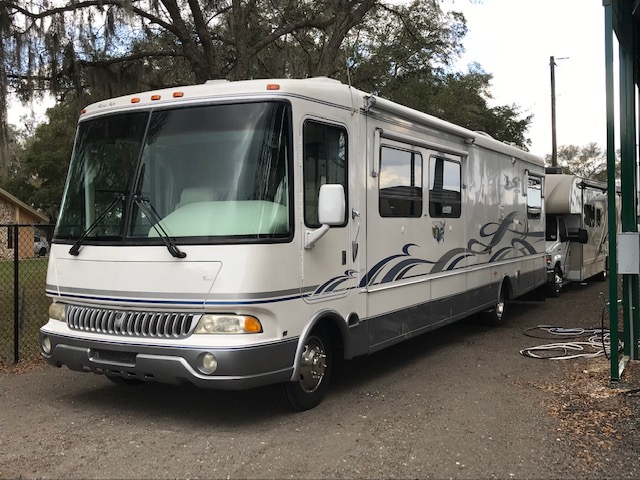 Well if you were looking at the picture of me earlier in this post, you may have noticed that the hair is getting long and scraggly.  It is past time for a haircut.  We spotted Big Al's Barber shop by the side of the road and swung in.  Sue sat in the Jeep and waited while I went in to see if they could work me in. 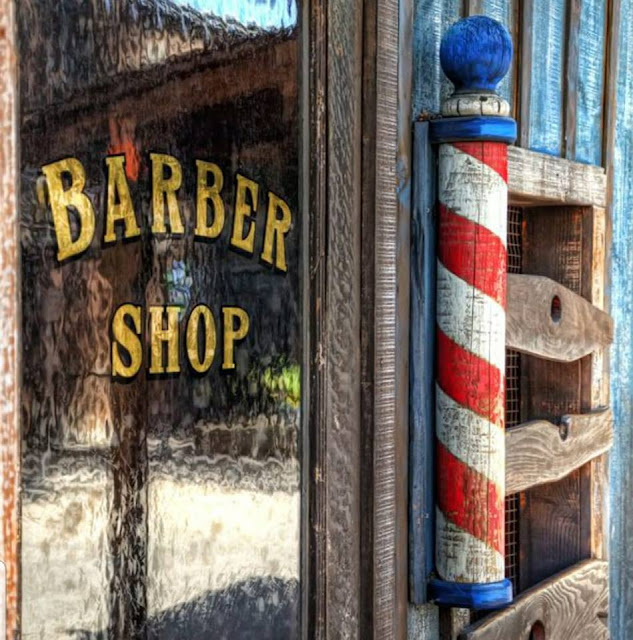 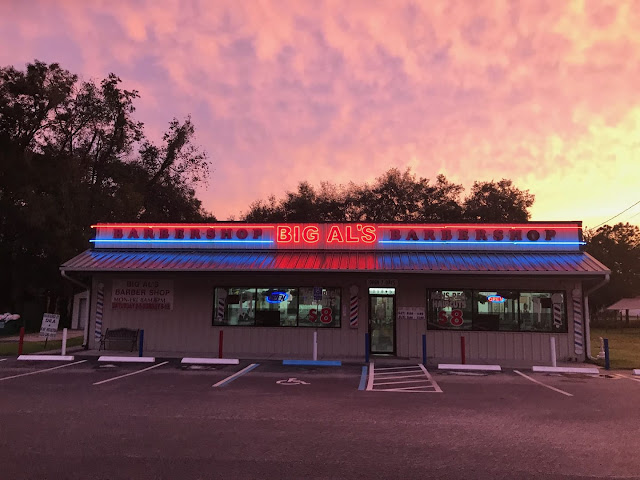 The place was full and at the door was one of those number machines.  I cranked the handle and a number on a piece of paper spit out. It was #41 and so I thought, this will take a while, so I began looking for a chair.  I hadn't even begun to look when I heard the lady calling,  #41, #41!!!   Well I almost yelled back Bingo, but instead headed to her chair.  I guess everyone else in the place had been looked after and all the people on the chairs were just the support group for those getting the cuts.  Within 5 minutes the place was deserted except for a guy at the far end from me and a couple support group waiting for him. 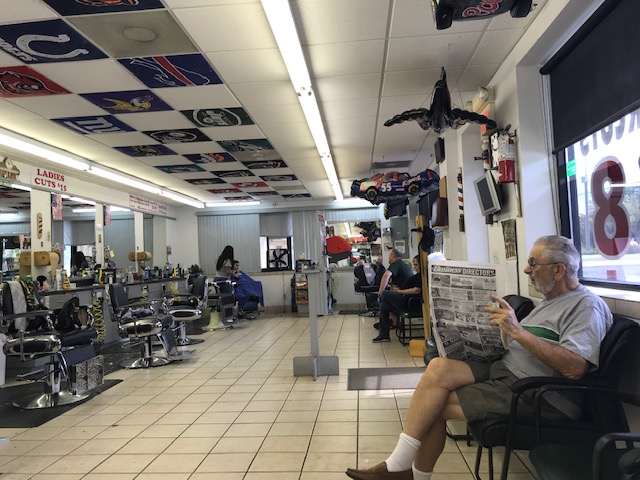 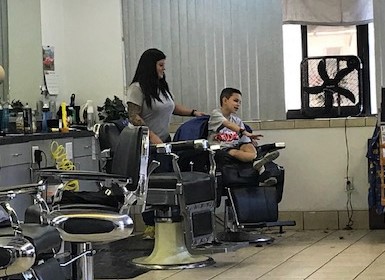 So when we I was done I got in the Jeep and sat there while we drove home.  When we got home, we sat and had supper and then sat and watched TV.  I told you it was a sitting day!!  All we did all day was sit!!   Here is the new doo!!  It sure feels nicer. 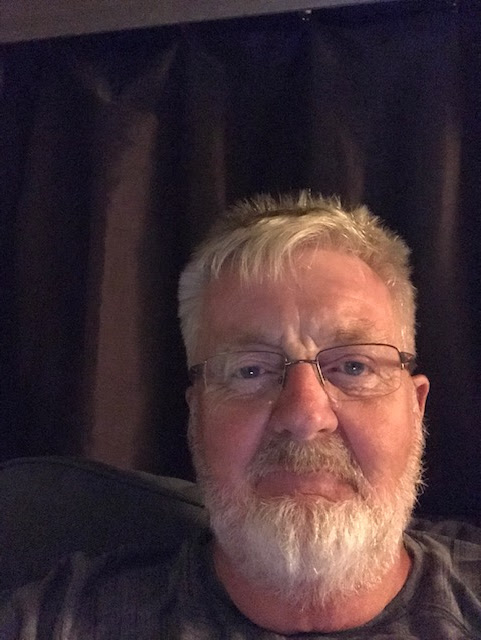 Here is the view out our window tonight.  A broke down city bus. 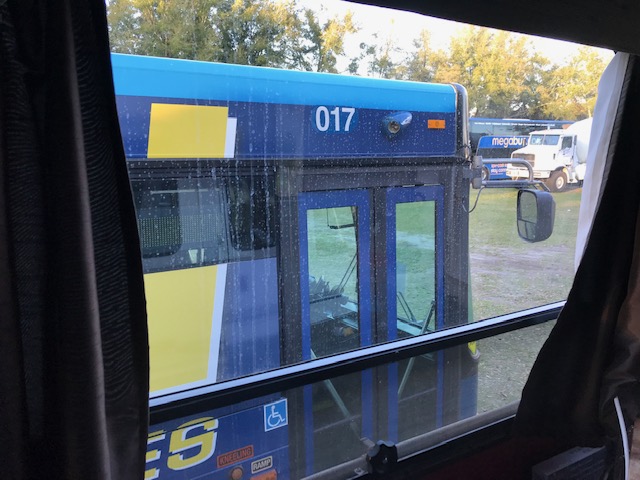 Posted by Lorne Green (A Place Called Away) at 18:56:00
Email ThisBlogThis!Share to TwitterShare to FacebookShare to Pinterest