A Little Taste of Norlans!

Since before we left last fall, I wanted to make a stop at New Orleans to experience the French Quarter.  Originally I wanted to be here the first week in March to immerse myself in Mardi Gras at the height of the party.  I have no urge to party like they do, but I just wanted to say "Been there, done that, bought the shirt".

Well as you know, the Ponderosa decided otherwise by breaking down so I had to settle for going when not much was happening. 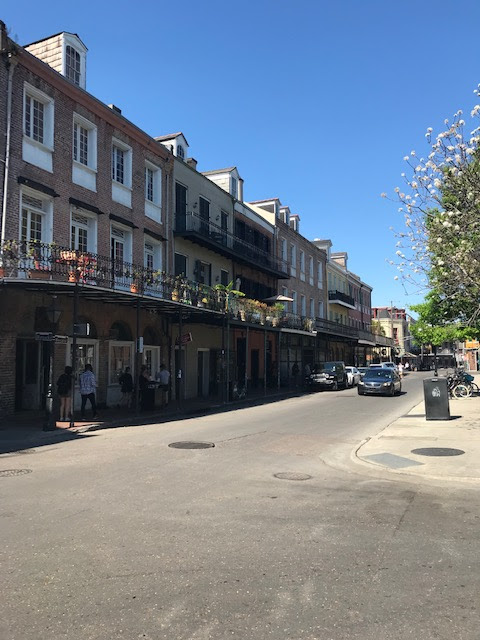 Today we are going to split the group and do a couple different things.  Pat and Harold and Chuck and Angie went to a plantation for a tour.  John and Val, Jerry and Deb, Ed and Lessie, and Sue and I headed to New Orleans to check it out.  First stop was Beignets (Benyas) for breakfast. Ed and Lessie took us to the Café Du Monde that specializes in them.  If you are a blog follower you will remember that we were introduced to Beignets by Janey, the horse lady, when we stayed at the Horse Park at Desoto National Forest, north of Biloxi in November. 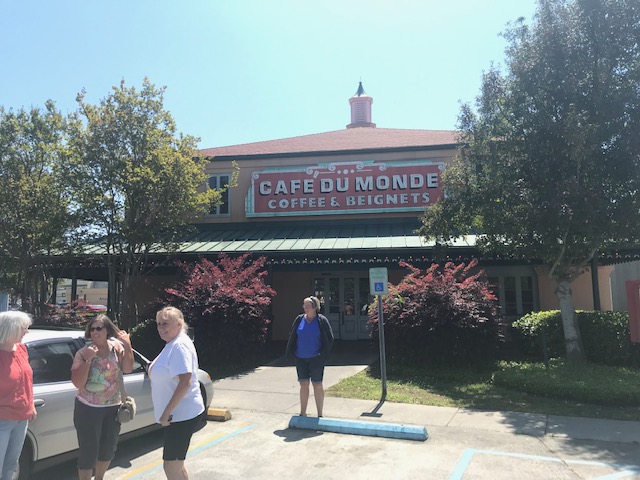 We got to watch the guy roll out, cut, and deep fry our beignets right in front of us. 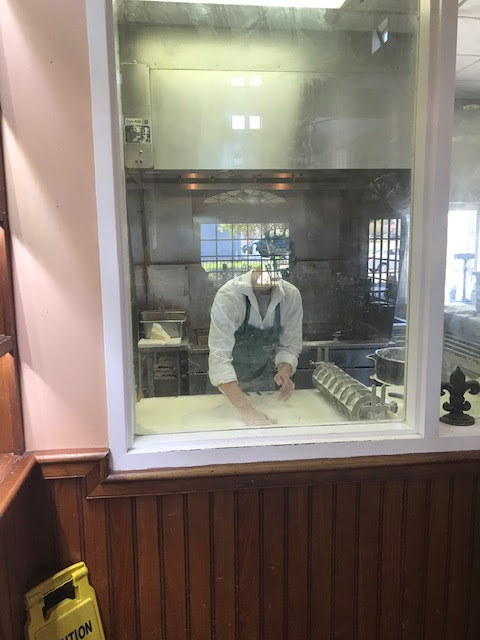 They came on a plate of three and had lots and lots of icing sugar on them.  They were light and fluffy and so good.   Here is my traditional picture of our plates after we were finished. 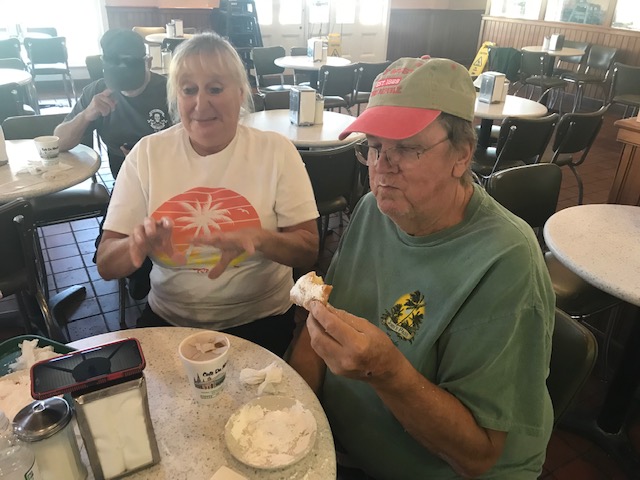 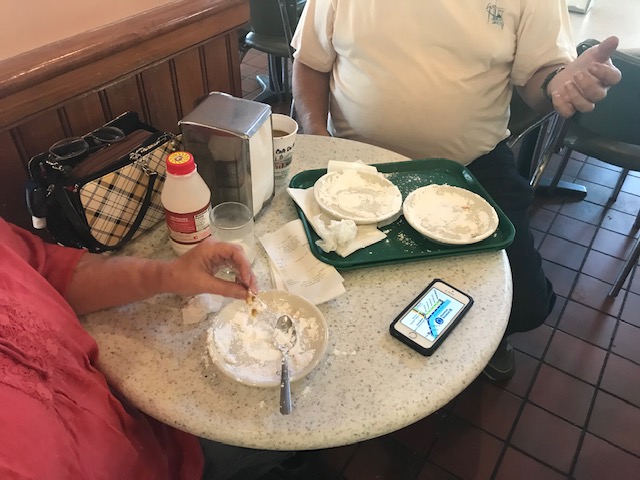 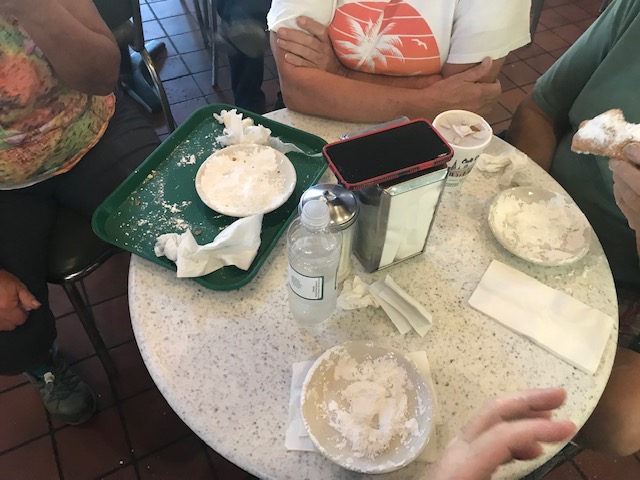 You can't help but get sugar on yourself and the floor. 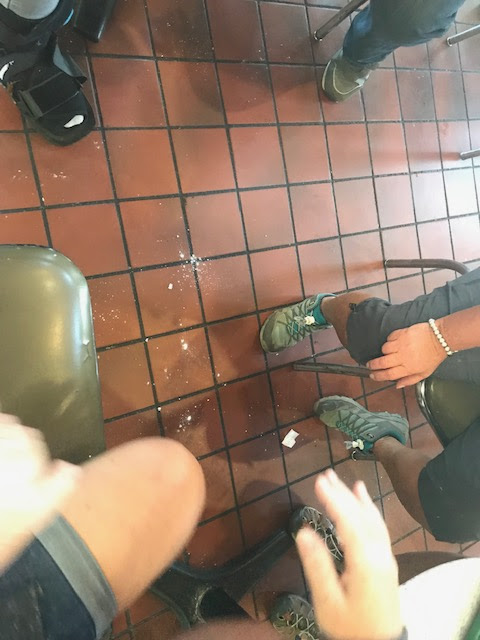 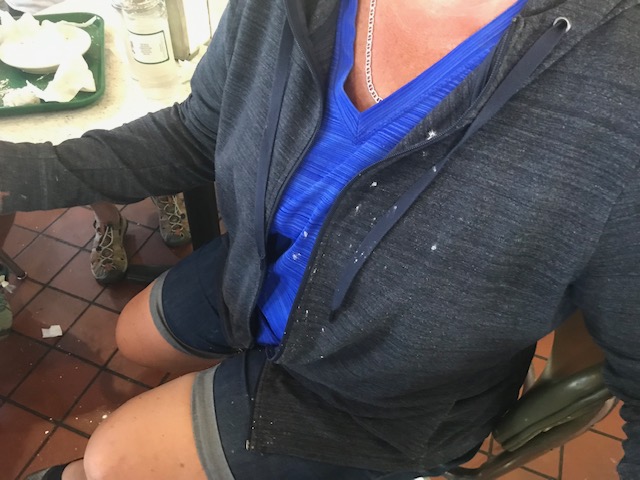 It was a nice experience to start the day with friends. 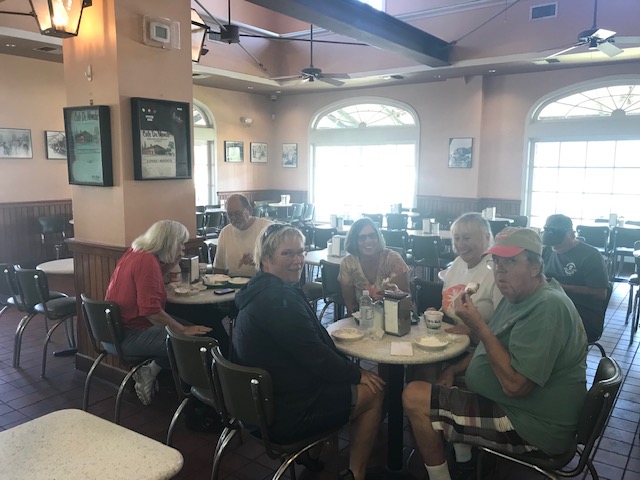 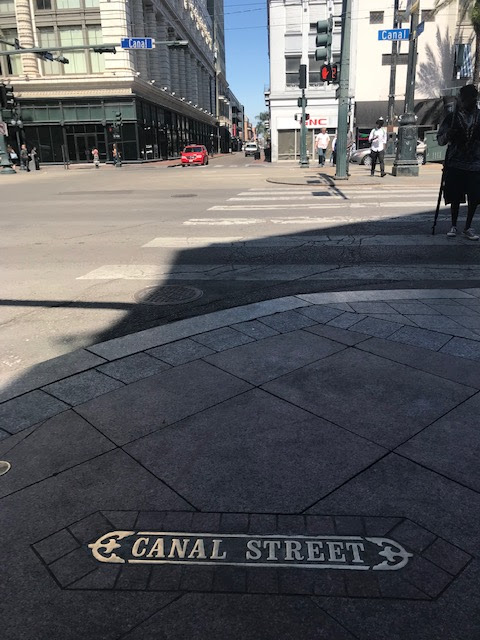 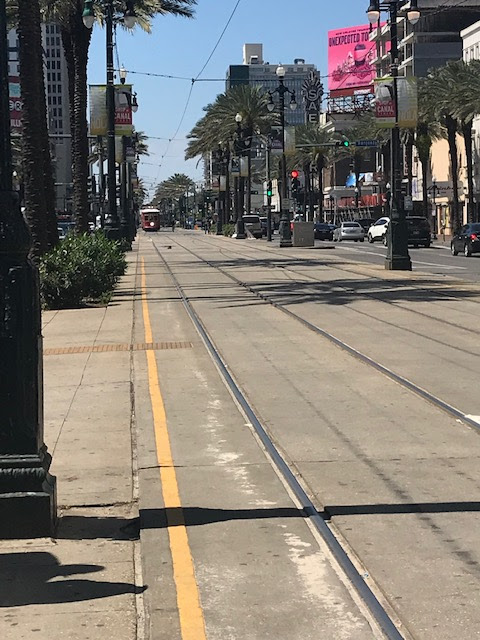 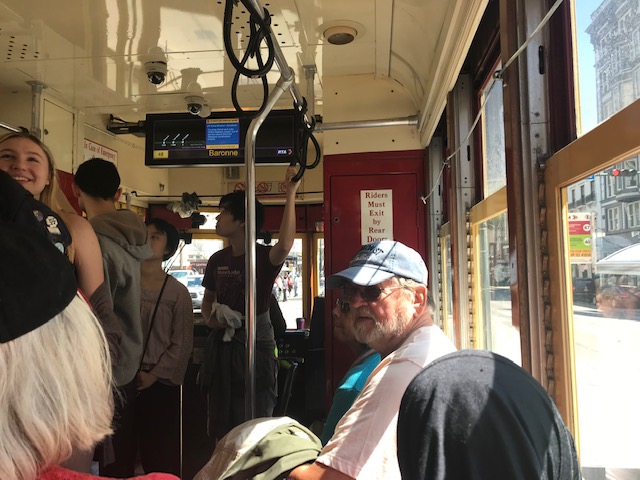 We have been friends with Ed and Lessie for a few years now and they often speak of their family.  They have two daughters and one son and grandchildren as well and we have not met any of them.  Well today that changed.  We got to meet Rachel who along with her SO lives and works in New Orleans.  It was love at first site.  She is sooooo much like our youngest daughter that we just felt at home around her.  She is a free spirit and just bubbles with life.  We enjoyed sharing the day with her.  We realized later that we didn't even get a good picture of her!!  Sorry Rachel!! 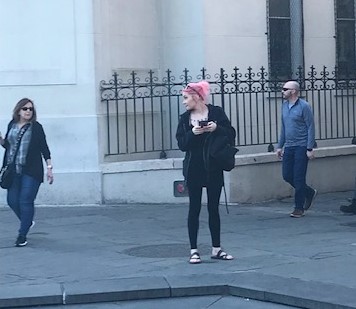 We wandered around the market for a while until the tummies started to rumble.  Rachel took us to a popular hot dog restaurant.  They have any kind of hot dog you could ever imagine.  We had a rolled hamburger dog with blue cheese and other nummy stuff on it.  Was it ever good.  We went to pay but no, Rachel already paid.  Not necessary but certainly appreciated.  Thanks! 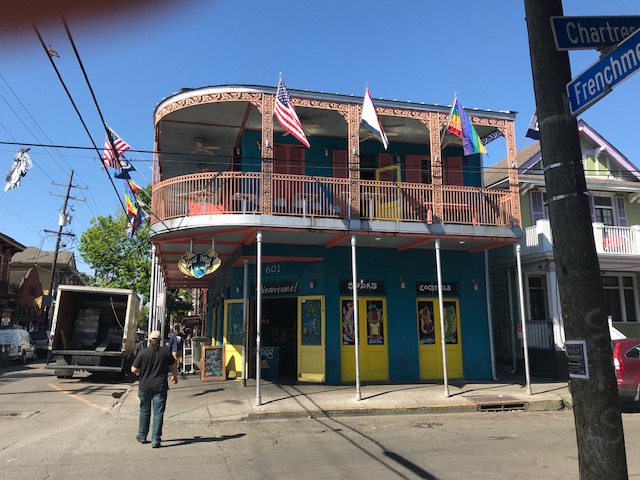 Spent a little time in Jackson square watching a sword swallower and a guy doing some balancing acts. 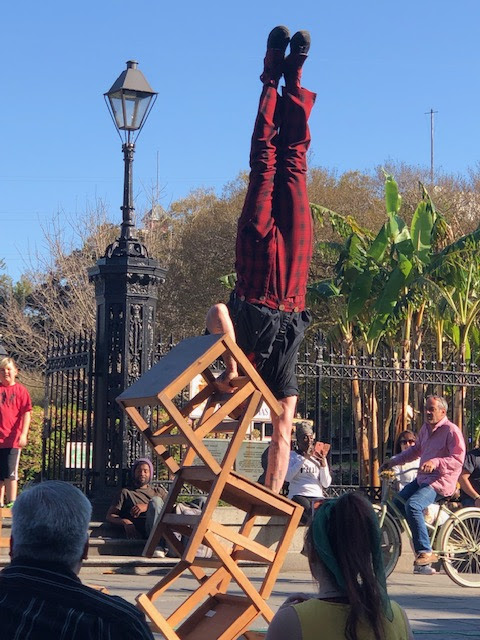 And Sue got beaded!!  She had to pay though!! 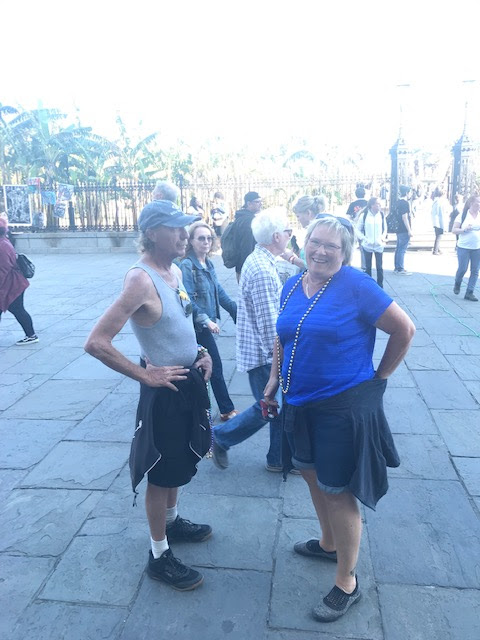 Then it was time to head for supper.  We were meeting the rest of the gang there as well after their plantation tour.  Rachel found us another nice little restaurant for supper.  We got to sit in the courtyard with lots of greenery around. 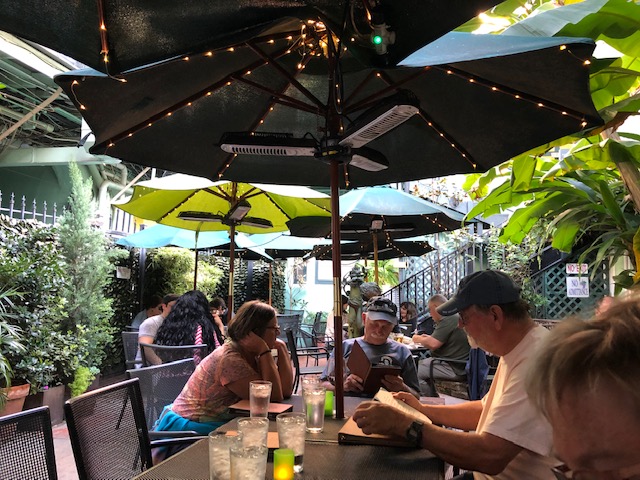 Great supper and then a quick walk down Bourbon Street.  Supposed to be a quiet night but still lots of action. 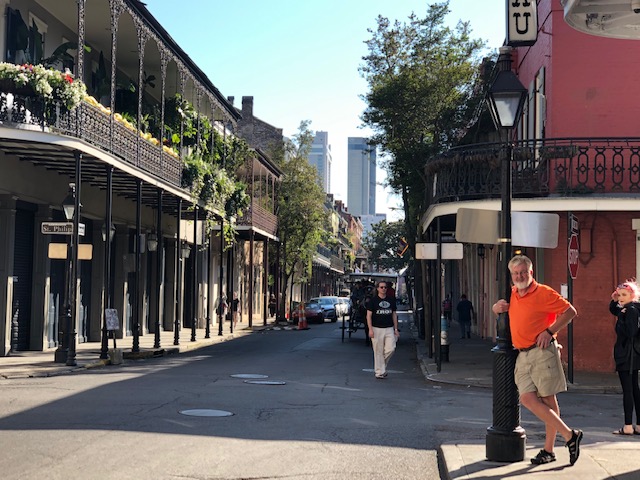 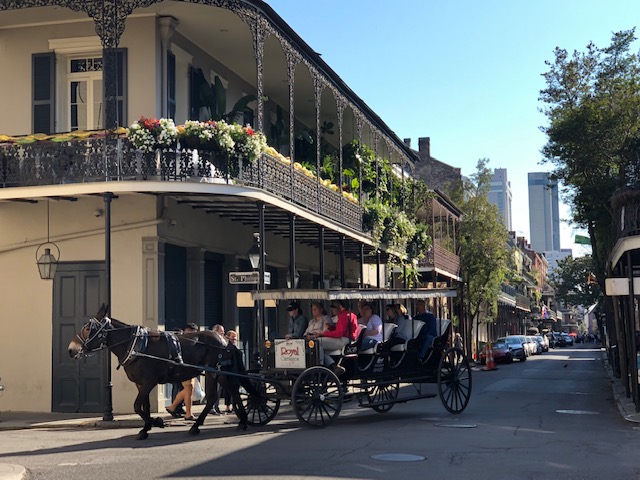 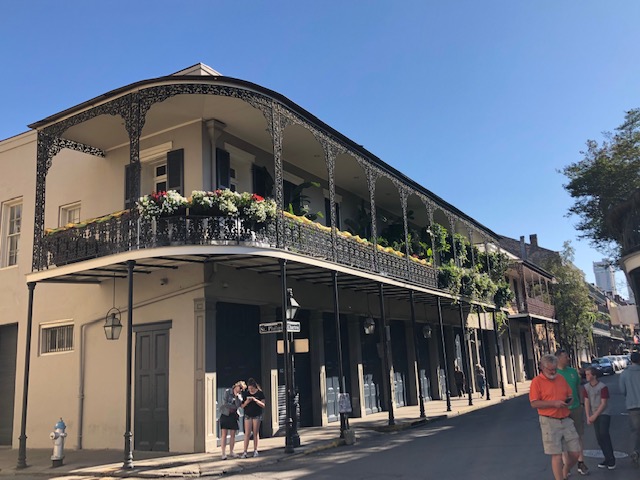 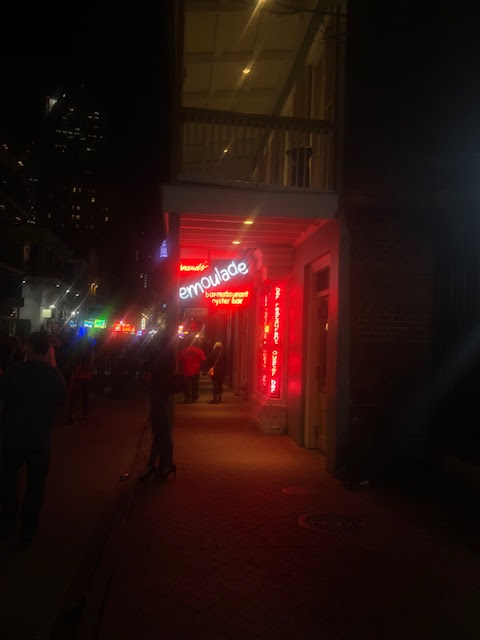 I did not get to see New Orleans like I originally wanted and did not get to hear any Blues or Jazz as was on my bucket list but we did find out where we can find it next time we visit Norlans.

The view from our window today when some school kids were waiting for a swamp tour: 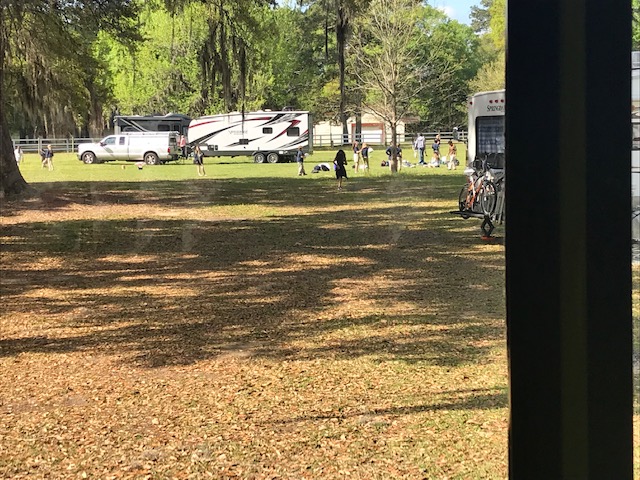 Posted by Lorne Green (A Place Called Away) at 19:56:00
Email ThisBlogThis!Share to TwitterShare to FacebookShare to Pinterest