Let a Little Sun Shine In!!

WHERE ARE WE? South La Posa LTVA
NEXT DESTINATION? Yuma, AZ
Yesterday Harold took delivery of his awaited solar panels.  He ordered them a couple weeks ago and doing his solar was one of the things we were planning to do here in Quartzite.  We have almost all the other wiring and breakers and stuff done, but the panels kept getting delayed.  Well, they are here and it's a nice day so, yup we are installing solar panels today.  We set up an assembly line and got all the mounts on before putting the panels on the roof. Harold and Chuck worked at mounting the panels to the roof while I hooked up some of the wires that hadn't got done before.  George provided some much-needed supervision.  We have the dream team here. 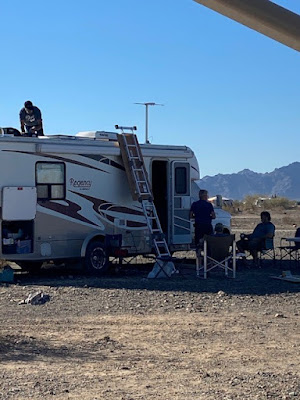 Harold was on top of the world surveying the progress we made.  I think he is really looking forward to some solar power again.  Solar gives you a freedom that I can't explain when you are enjoying boondocking in the warm Southwest. 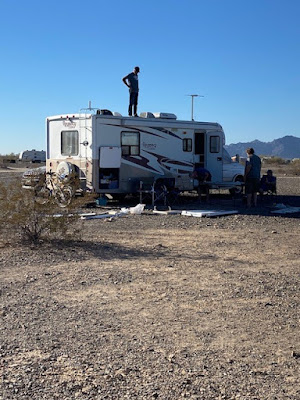 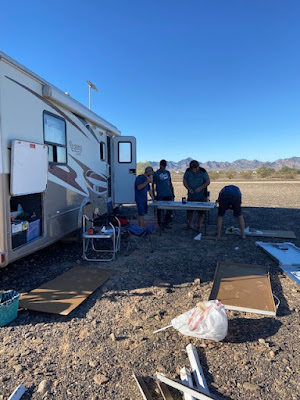 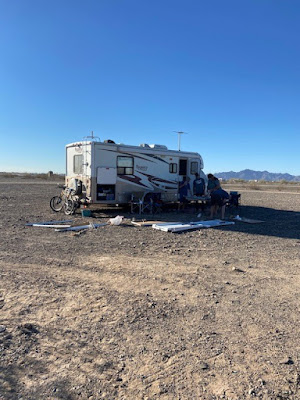 One of the things the sun's rays do down here after a few years is to turn plastic into a brittle material.  That was the case of the cover over the roof vent that Harold placed his hand on.  Crunch it went and there was a hole in it. 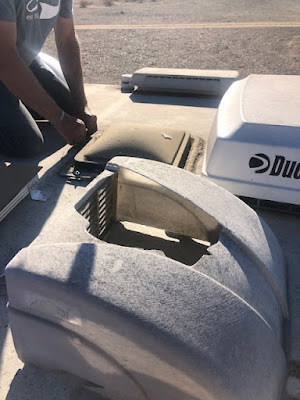 When we threw it down to the ground, it disintegrated.  Now we have a project for another day!! 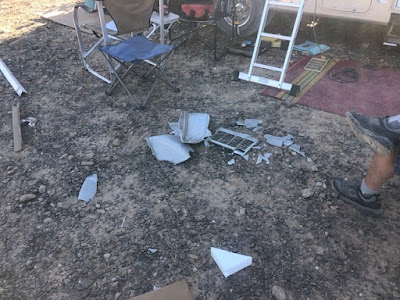 By lunch time we had all the panels screwed and glued and ready for some wire.  Chuck let us use his ladder which made getting up and down easier.  We left the cardboard on the panels so they wouldn't produce power before we were ready. 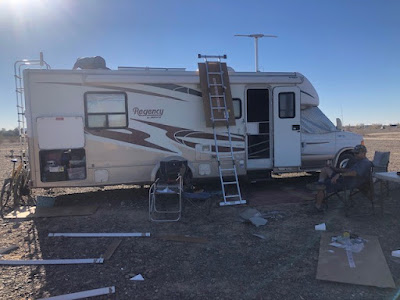 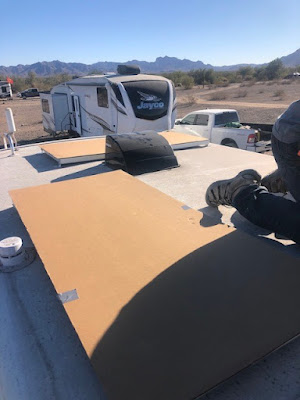 Next, we had to drill a hole in the roof for all the wires to go into.  All the wires from the panels will go through the hole and down to the terminal block in a cupboard below.  We have a cover to go over it later. 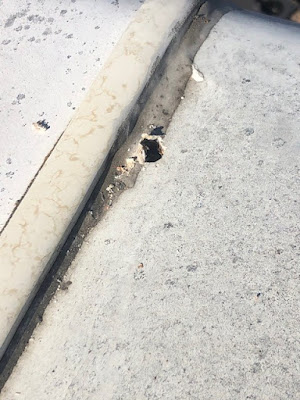 We got busy crimping all the wires from all the panels together.  A year or so ago, I purchased a hydraulic crimper which has come in handy a number of times for various projects.  It came in handy again today.  Good tight crimp connections make sure that the efficiencies of the wire are maintained. 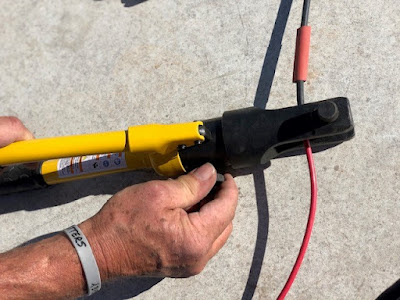 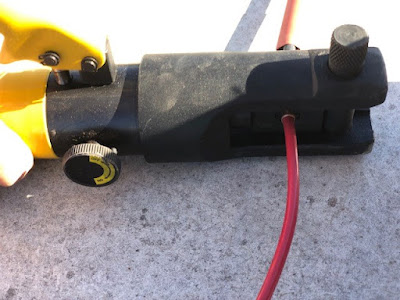 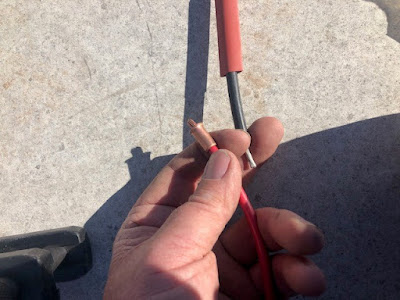 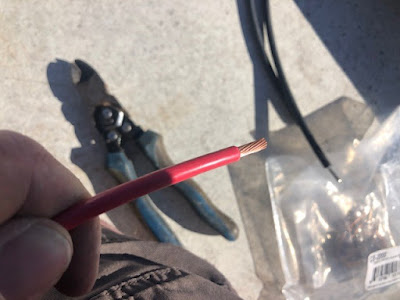 We got all the wire ran but we will wait until tomorrow to fasten them to the roof.  We were more interested in getting the electricity flowing so we could check out the system before the sun went behind the mountain. 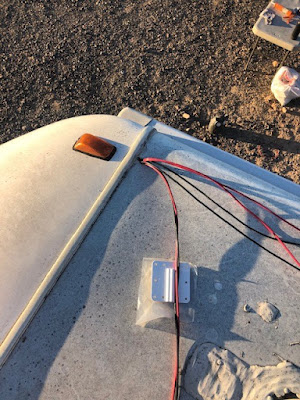 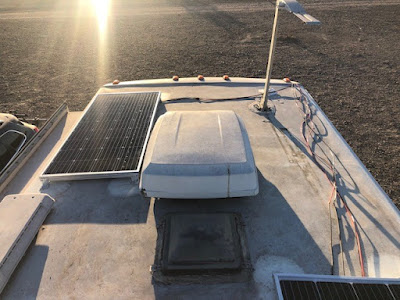 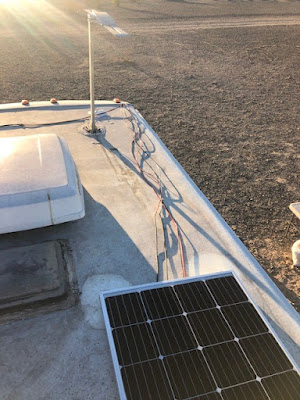 The shadows were getting long by the time we got everything hooked up.  We turned on the switch and poof!  We had amps showing on the remote read.  Not very many amps, but enough to confirm that everything was working the way it should.  By then, there were no solar rays to be had. 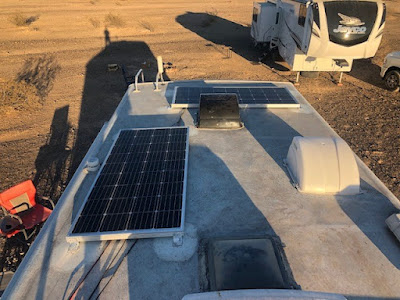 We had all ordered Pizza from Silly Al's pizza and George and Henny offered to pick it up on their way back from town.  We all sat around and enjoyed some pretty yummy supper. 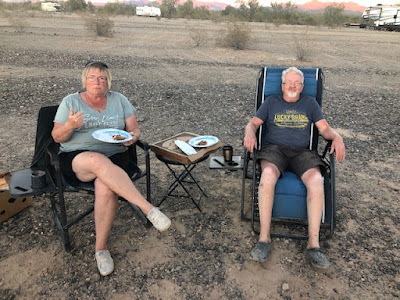 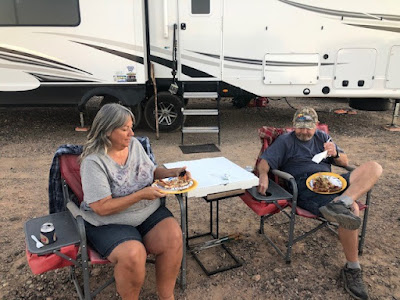 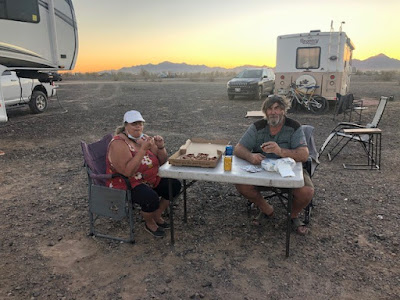 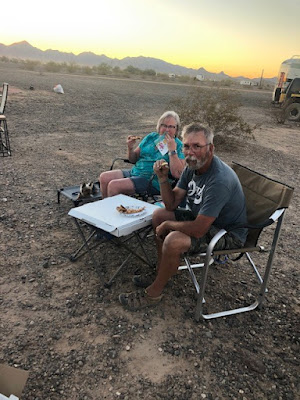 Sunset soon snuck up on us and it was spectacular as usual. I remember a story of an acquaintance of ours back home saying that he couldn't figure out why anyone would want to spend time in the desert with the dust and dirt blowing.  Well, I'm here to tell you that this is a great place to be if you're with good people.  And yes, that is dust hanging in the air in the picture.  There is no wind, so the dust from a few cars is just staying suspended in the air. 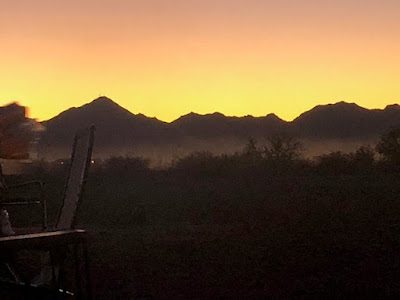 George had picked up some wood in town and he was determined to get it lit without any fooling around with kindling.  George comes from a farm like Harold and I he doesn't fool around when there is a job to be done.  So out came the propane torch and like nobody's business we had a fire. 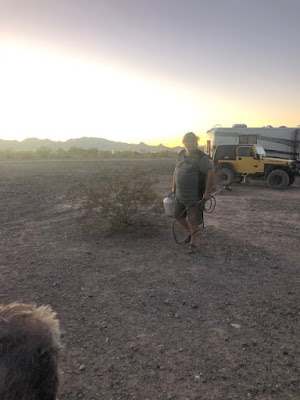 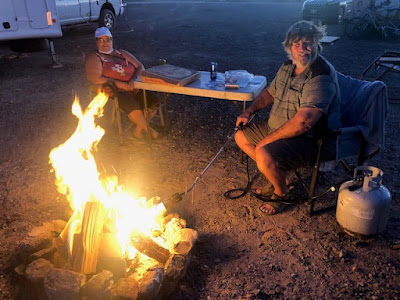 We straightened out a lot of the world's issues tonight around that fire. We made smores and smo-ho's and laughed a lot.  We have realized that we are getting closer to leaving for Mexico, and soon we will be on the beach.  Hope your day was as good as ours.

Posted by Lorne Green (A Place Called Away) at 21:33:00
Email ThisBlogThis!Share to TwitterShare to FacebookShare to Pinterest