WHERE ARE WE? Magnolia Beach, Texas
Well today was shaping up to be a quiet one.  The girls have all planned to go shopping in Victoria for the day and leave us guys to fend for ourselves.  There won't be a lot of fending going on I will tell you.  We had a couple coffees and Ed worked on his generator for a while.  We mostly sat and talked about life and fended. 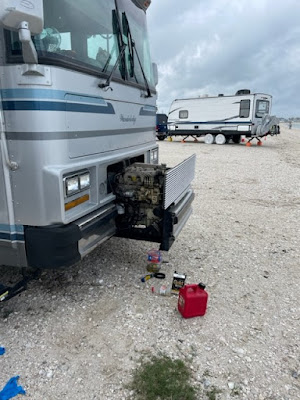 Then we watched a couple ships go by... 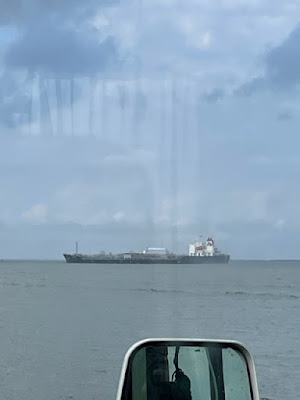 All of a sudden that manly urge came over us!!  Yes hunger!!!! and the urge to eat!!   So we loaded up in Ed's car and headed to the nearest food establishment, the Indianola Fishing Marina!!  It's a great little restaurant right on the water and people come here to eat and to fish. 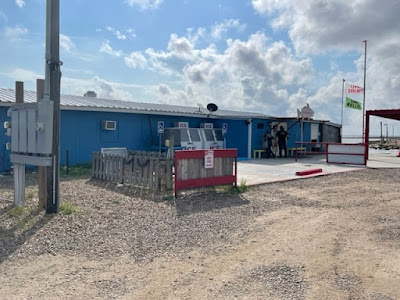 We ordered up and were sitting watching when the lady who was fishing caught and nice Gaffe Top.  They are a catfish with a long spine as a sail fin which can hurt you if you handle it wrong.  This is the second one she caught today. 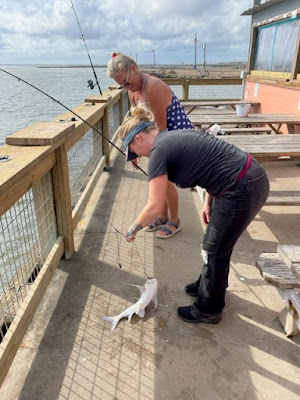 Well with the hunger pangs settled down we soon were overtaken with another manly urge.  A nap!!!  So we headed home.  On the way we checked out this old fishing boat which has seen better days.  Beside it was an egret and a grackle talking to each other.  Grackles are like women cause they just squawk continually about nothin, while the egret is like a guy, just perched on one leg like, Are you through yet? I need to be fishin!!!!  I'm joking....you know that.....right?.....right?? 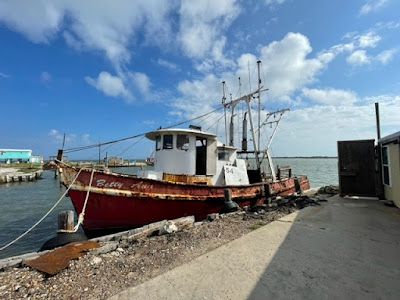 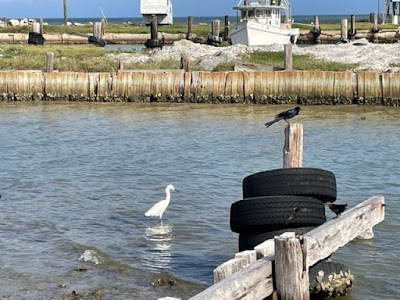 And just down the road was a pier with a lot of rocks and broken cement acting as a breakwater for it.  Someone had found some colourful paint and spent some time making it look more interesting. 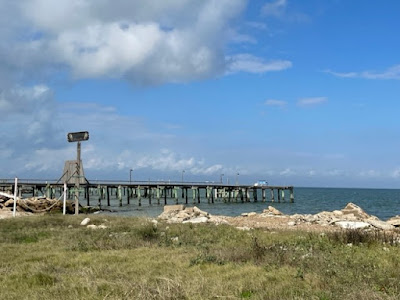 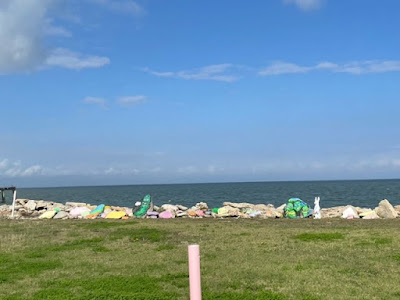 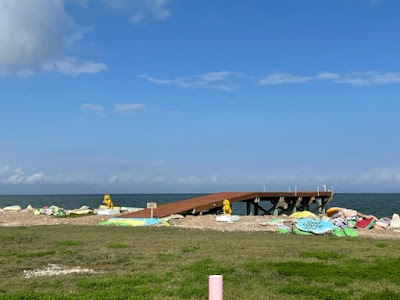 Love some of the house colours here as well. 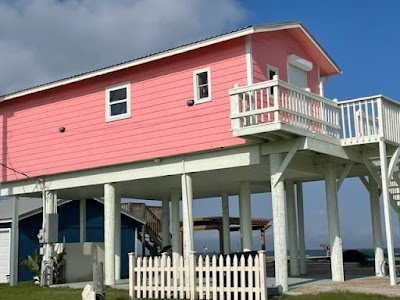 Well we got home and had a wee nap which made everyone feel much better.  All of a sudden there was a loud noise like a fog horn on a boat.  I sprang outta my chair and ran to the window to behold a guy who had a guitar and a great big amp hooked to his car battery and he was pretending to be Jimmy Hendricks or Alice Cooper.  He was doing not a bad job except he was way too loud and it was distorting real bad.  He was just giving it all he had. 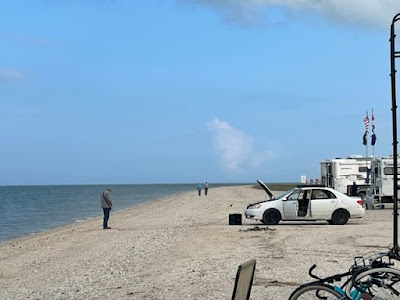 All of a sudden a guy appeared and he was on his cell phone apparently to the sheriff and he was MADD!!!!  He told the guy off and paced back and forth and waved his hands and almost had a heart attack, and the guitar guy just walked over and pulled the plug on his amp and laid his guitar in its case on top of the car and packed up.  No resistance at all.  When the guitar man was done packing up, he came over and Chuck (who loves that heavy metal stuff) said, hey man, you were good, just too loud.  The guy said something like thanks man, and walked away and left.  Then the guy who was mad came over looking for sympathy from Chuck, but Chuck said, hey man he was loud, but he was not bad and he has every right to be on this beach same as you and me.  Well I don't think Mr. MADD is gonna invite Chuck over for supper any time soon.  I was proud of Chuck for sticking up for the underdog. 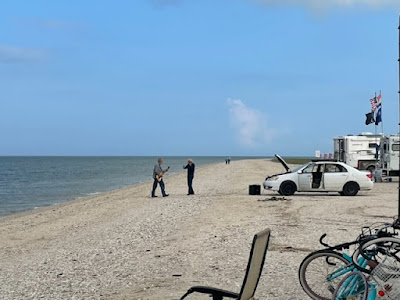 On a lighter note, Archie made a friend on the beach.  Its a little I don't know what, like a miniature Rottweiler or something and Archie has fallen head over heels for her. Well that pretty well wrapped up our day.  Its 8 pm and the ladies are not back yet and peace and quiet is all I hear.  Good Nite!!
Posted by Lorne Green (A Place Called Away) at 18:22:00
Email ThisBlogThis!Share to TwitterShare to FacebookShare to Pinterest